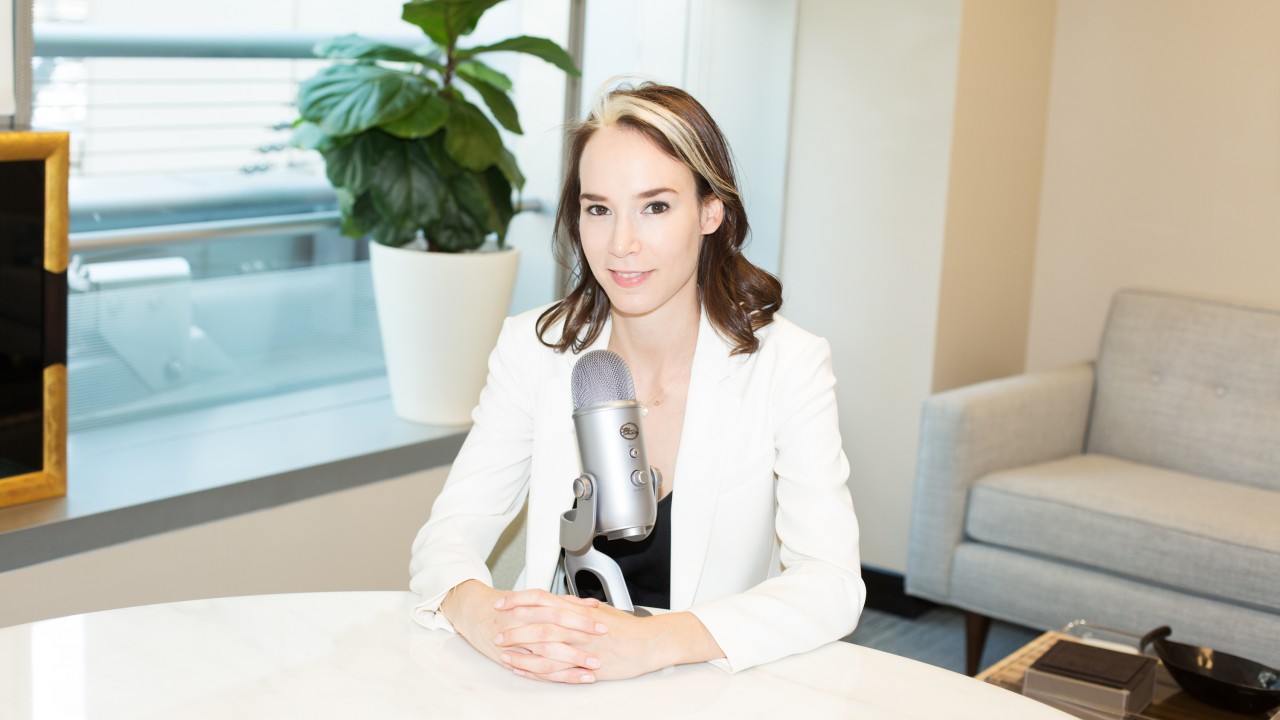 7 Things We Can All Learn from This Female Venture Capitalist

Alice Lloyd George is investing in companies that are on the frontier of science and technology—and is usually the only woman at the table.

Working in such female-centric industries as fashion and media, sometimes it’s easy to forget that the gender parity struggle is very, very real in many of the “old boys club” businesses. Especially when it comes to tech and startups, which is perhaps the glamorous world to be a part of if you were born in the years leading up to the explosion of the internet, is so highly visible—and setting the corporate cultural tone (free lunch, unlimited vacation days) for so many companies. But then you get slapped in the face by the sexit debacales plaguing Uber. Or you hear about male venture capitalist after venture capitalist taking advantage of female entrepreneurs. Google it. The news of such scandals is plentiful and ugly.

It’s with all this in mind that we couldn’t not take a moment to applaud and learn from a woman like Alice Lloyd George, a millennial who started out as a journalist but whose passion for science and technology (she’s a self-confessed video game and sci-fi geek) led her to tech and to becoming a venture capitalist. But that’s not all, because while (as she told us) fewer than 7% of venture capitalists are women, Lloyd George doesn’t invest in typical *female-focused* companies (beauty brands, e-commerce platforms), but instead puts her money—or that of her Manhattan-based firm, RRE where she is now a principle—into what’s called “frontier technology,” or things like artificial intelligence, Bitcoin, and virtual reality. While we can’t pretend to understand the intricacies of these technologies (ones that Lloyd George says will “change the plumbing of the internet,” or, in our terms, be a BFD), what we can do is take a page from her book, in which people can find common ground based on passion rather than gender and one is never cornered by tokenism. 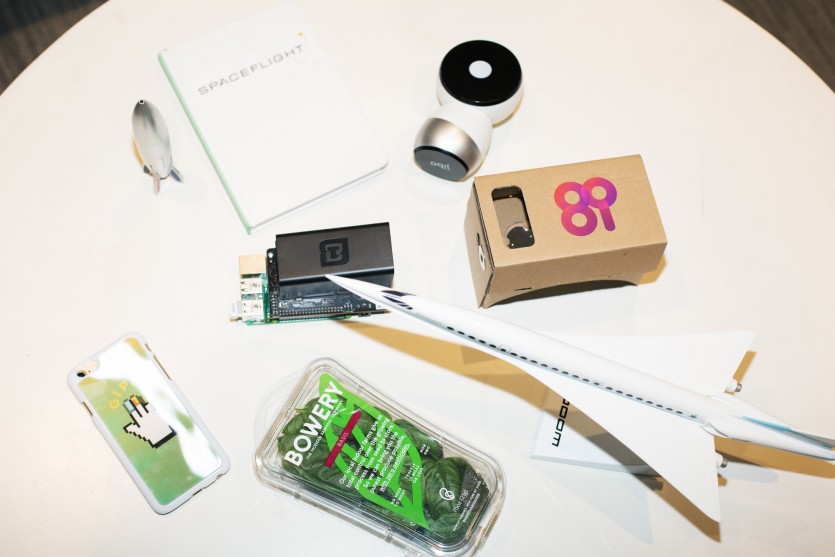 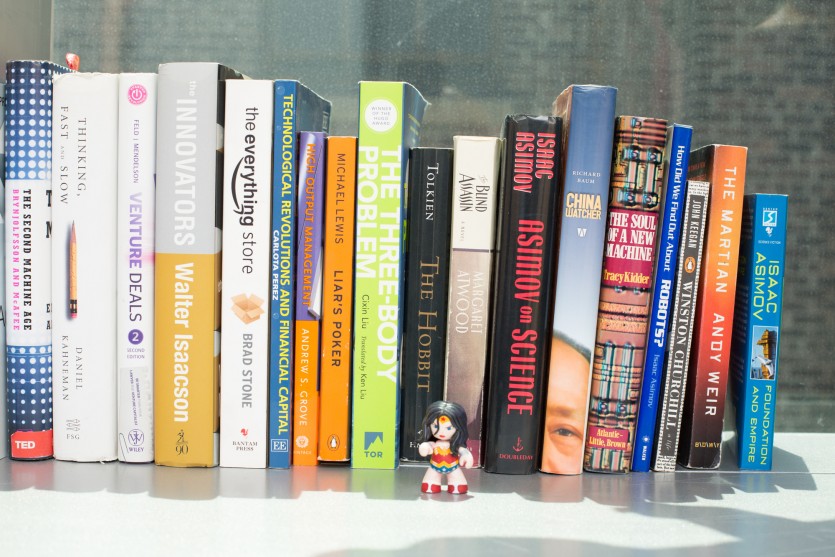 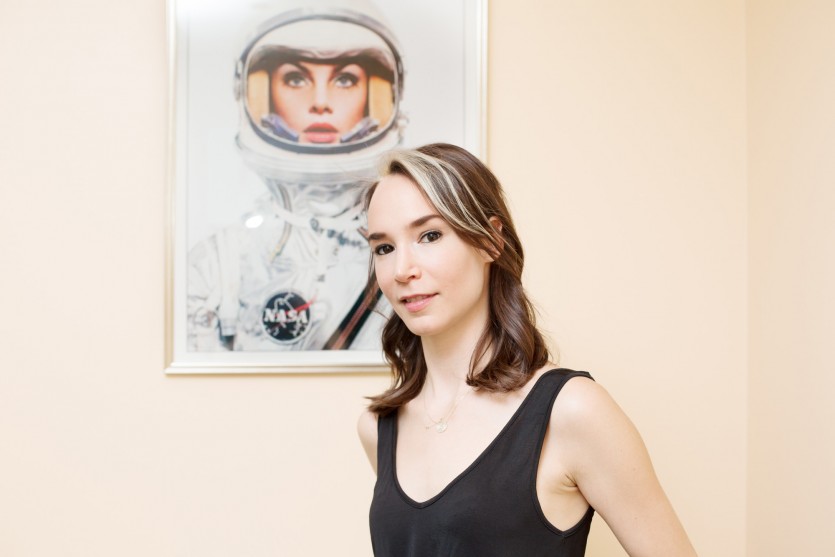 “My path wasn’t planned or intentional; it was accidental. I grew up in the UK and went to the US for college. I always wanted to be a reporter—I was really passionate about science and tech, but reporting was my long-term interest. I graduated and started working at The Wall Street Journal covering business in Asia. I had been fascinated by Asia and was reporting in Hong Kong and realized I wanted to be in mainland China. I moved up to Beijing and was doing research there. The common theme when it comes to everything I’ve done is research, and I went from journalism to being a long-term investigative journalist for Brookings, which is a think tank. Eventually, I wanted to come back to the US to get some basic training. When I was in undergrad, a lot of people had gone from school to this hedge fund in Connecticut called Bridgewater—I thought it would be a great way to get training, and I’d always loved economics. I lasted under a year—it wasn’t the right fit. When I left, I was working on a start-up, which didn’t end up working out, but it took me to California and Silicon Valley. A friend of my brother suggested I come work at a venture capital firm when I was there to come see what it was about. I loved it and found that it was similar to journalism because you do research on an area or person. For journalism, the final project is to put out a piece and have a byline. I loved that at first, but then I decided what’s really cool about doing all this research and forming a thesis, and becoming a brief subject matter expert, is making an investment and then getting to work with that investment over several years. When I was young, I wanted to be involved in things that would change the world, and that led to China and macroeconomics and ultimately led to technology—they’re all massive forces that I got really excited about.” 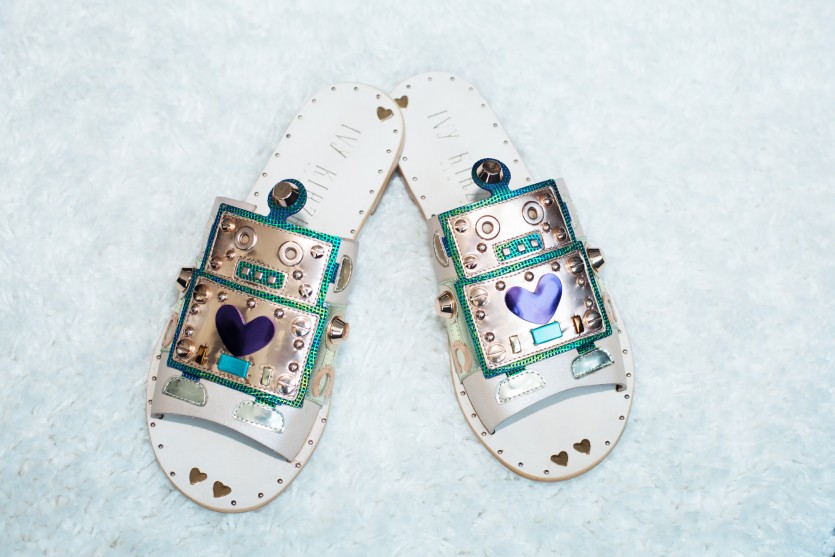 2. Let others see that passion as an asset.

“I never thought I wanted to be a venture capitalist. I wanted to be a National Geographic photographer or a reporter. I think there’s a path to venture capital through working at start-ups or in banking. It’s changing, though; partners used to hire from tracks they were familiar with, and now they hire people where they see a spark or curiosity or the ability to share a different perspective—or just passion. I think the whole world is starting to orient around passion. Experience can help, but technology changes so fast. If you worked for a software start-up 10 years ago, those technologies have changed and that experience isn’t as valuable as it used to be.”

3. Know your self-worth despite what the world is telling you.

“I think they say that the proportion of female VCs is 7%, but when you take out analysts and associates—people who don’t have much power—and corporate VCs at places like Intel or Time Warner, because there’s no financial burden for them, it goes down to about 3%. I’ve read that that makes the number of women financing start-ups equal to the number of women coal miners and women firefighters. My firm is a little different, and I feel lucky in that, because from the first month I was here I was able to source and lead investments even though I was an analyst. Now I’m a principal, but I immediately felt like I was doing real and important work—I’ve been lucky because I don’t think a lot of people get to do that, male or female.” 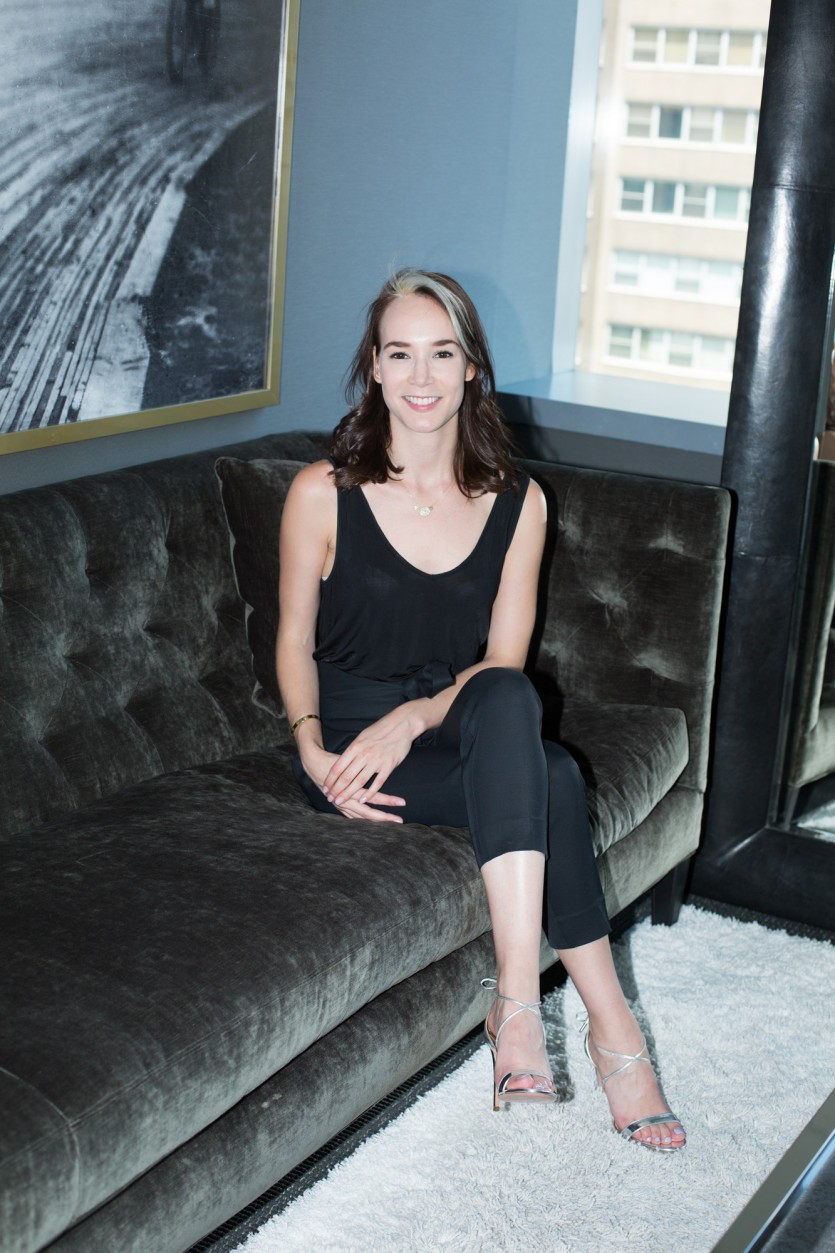 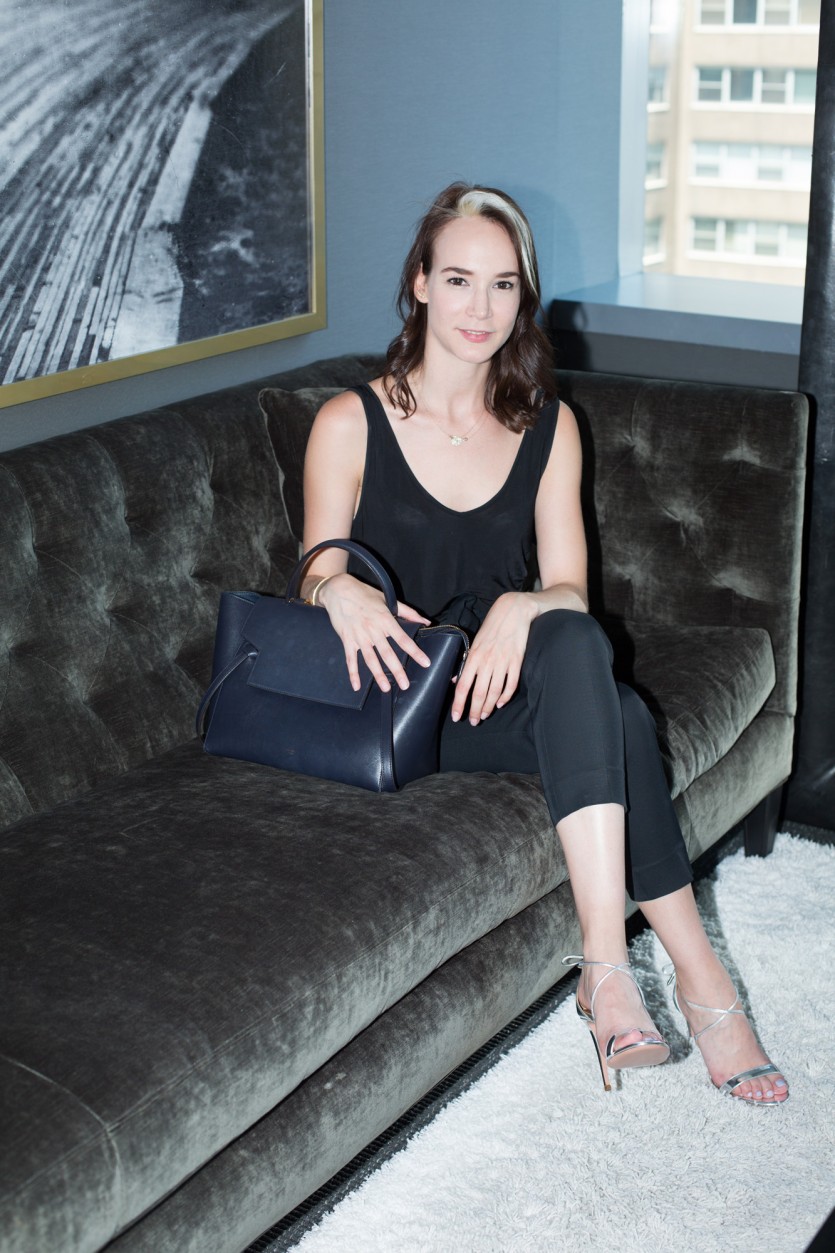 4. Don’t be afraid to go where no (or very few) women have gone before.

“The tech industry obviously has a huge gender problem. VC is a subset of that and slightly different. It’s a man’s world and certainly there aren’t a lot of role models out there. There are people I admire, but I don’t necessarily relate to a lot of other female VCs—I don’t focus on e-commerce or beauty or other female-facing companies. There tends to be firms that will have one token woman and that woman will do the ‘woman deals’—when the tampon start-up comes in, they send it to the woman. I’m happy to look at these companies—of course, I can understand the product—but my real passion is frontier science and technology. I’m in a minority there.”

5. Be a pioneer to lift other people up.

“There’s a subset of venture partners who are like private equity partners—they hire people they went to college with or were in a frat with or played golf with. Returns will drive some of the change we need to see—women work really hard and have less of an ego, so hopefully, with a few female investors out there getting good returns, and female funds that get great returns, and female founders’ attitudes will change. The more exits we have, the more that will help, especially if they’re outside of traditional female industries, because it just goes to show we can start anything. Once we start to have those pioneers, the shift will be easier.” 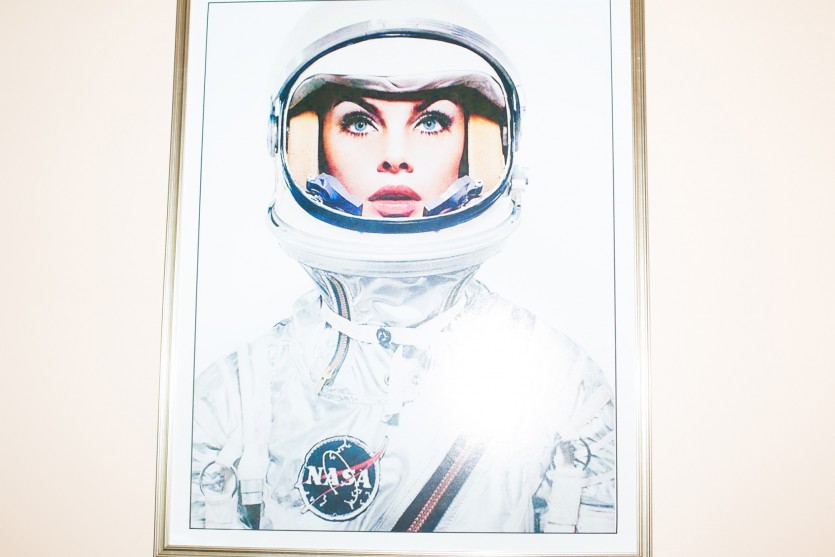 “The problem is there’s this thought that if you have a woman or someone who’s racially diverse or has a different educational background, then the box is checked. It’s not just outward appearance; it’s diversity of thinking. It sounds cliché, but that’s more important. You could have a firm with six white guys that have incredibly diverse thinking—it’s possible—but you’re more likely to have diverse thinking when it’s coming from diverse people.”

“I started this podcast, Flux, about frontier tech, and it’s helping to distill a lot of the work I’m doing into a public forum. [I started it because] I thought, I’ve got so much to learn, and there are experts spending all of their time thinking about these things—so why don’t I create this platform to be a megaphone for them and their stories. I’m so excited to hear about how they got to be doing what they’re doing—especially these incredible women who I’ve been meeting through the podcast.”