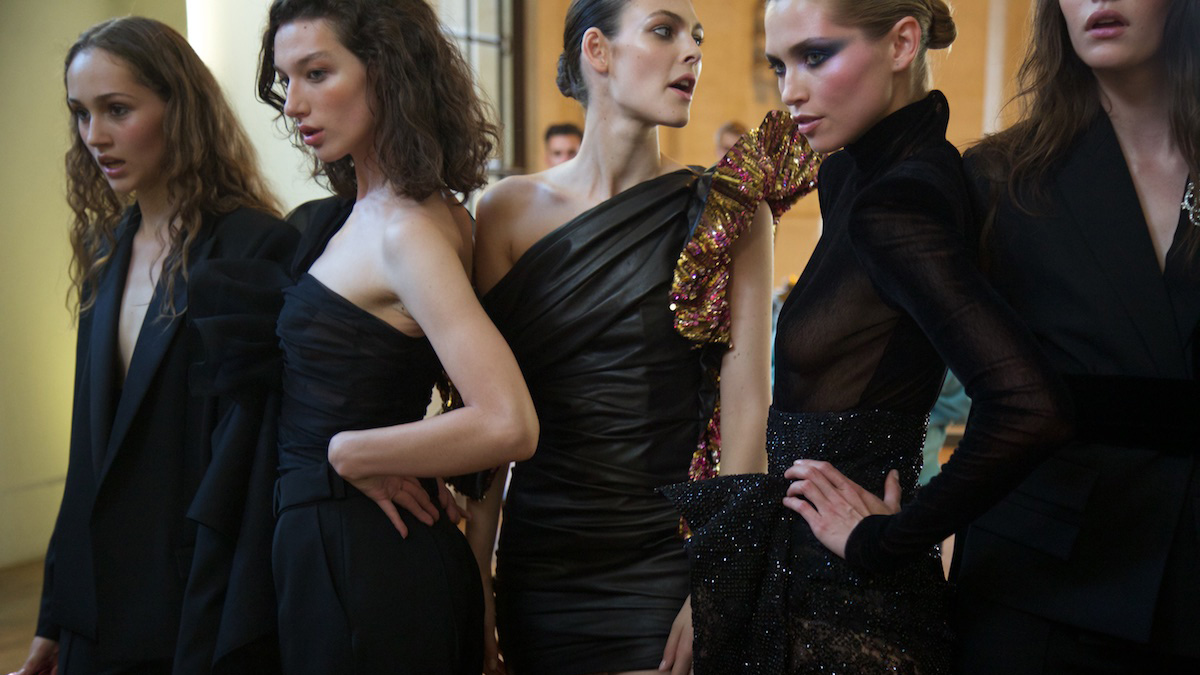 Behind the Scenes at Alexandre Vauthier’s Disco-Inspired Couture Show

Alexandre Vauthier’s fall/winter 2017 Couture show gave nod to the heady days of Studio 54. With a set that resembled the iconic New York nightclub, models walked to a soundtrack of electronic disco, wearing sultry, shiny dresses that pointed to a more refined take of the era. Last season, silhouettes were short and racy, but the Vauthier girl continues to evolve. And while she still has a hedonistic soul, she’s less amped up and more into sexy French glamour circa the early ’80s this season.

As always, the fabrications were luxe and plentiful, ranging from the softest alligator skins to feathery boots and stoles, cropped fur jackets and silk organzas. Oversized and over-the-top jewelry by Goossens added another layer of texture and glitz to the collection.

The Vauthier girl is always confident in her sexuality, and whether she’s rocking a gown with slits running up the leg and down the chest as Bella Hadid did, or something more demure like a velvet bustier paired with cigarette pants, she always has a wink in her eye.

Click on the slideshow to check out backstage and the show.

“There are shiny iridescent boots in pink, lilac, green and blue, so we’ve taken those colors and introduced them to six girls,” explained lead makeup artist Lisa Butler. “It’s big makeup, and they’ve got a proper old-school ’80s disco look.”

“I began with a picture of Studio 54,” Alexandre Vauthier said of the set inspiration. “I love New York, and I love [the] energy you can have at this club, which was mythical. I could say the same about Le Palace in Paris.”

Bella Hadid getting ready for rehearsals.

“The rest of the girls have the same kind of shape of makeup but in neutral tones.”

“We’ve got some really glossy, shiny chignons, and we have some loose, wavy and natural curls. So we have a mix,” said McKnight of the hair this season.

“The fabrics are super rich this season—jersey, metallics, alligator and a lot of techniques with feathers and embroidery,” said Vauthier.

“I really want to work on the classic thing—Haute Couture in Paris, but rewrite it in my way.”

“I want to express that Couture is precision, tailoring, expensive fabrics, and it’s a lot of work. But in fact, it’s a pleasure first.”

“It’s really Paris-inspired because it’s my culture,” the designer said. “When you speak about Paris, you speak about champagne, Place Vendome, and Couture, of course. It’s impossible to do this kind of work in another part of the world. So I want to work on it to express all this but translate in a modern way.”

“Tailoring is my obsession.”

“I want to have the girls in these fabulous, expensive clothes but having fun in them.”

“It’s about the moment, and this is the l’air du temps.”

The designer hugs his models after the show.

“This collection is international—I wanted to mix US attitude with French couture.”