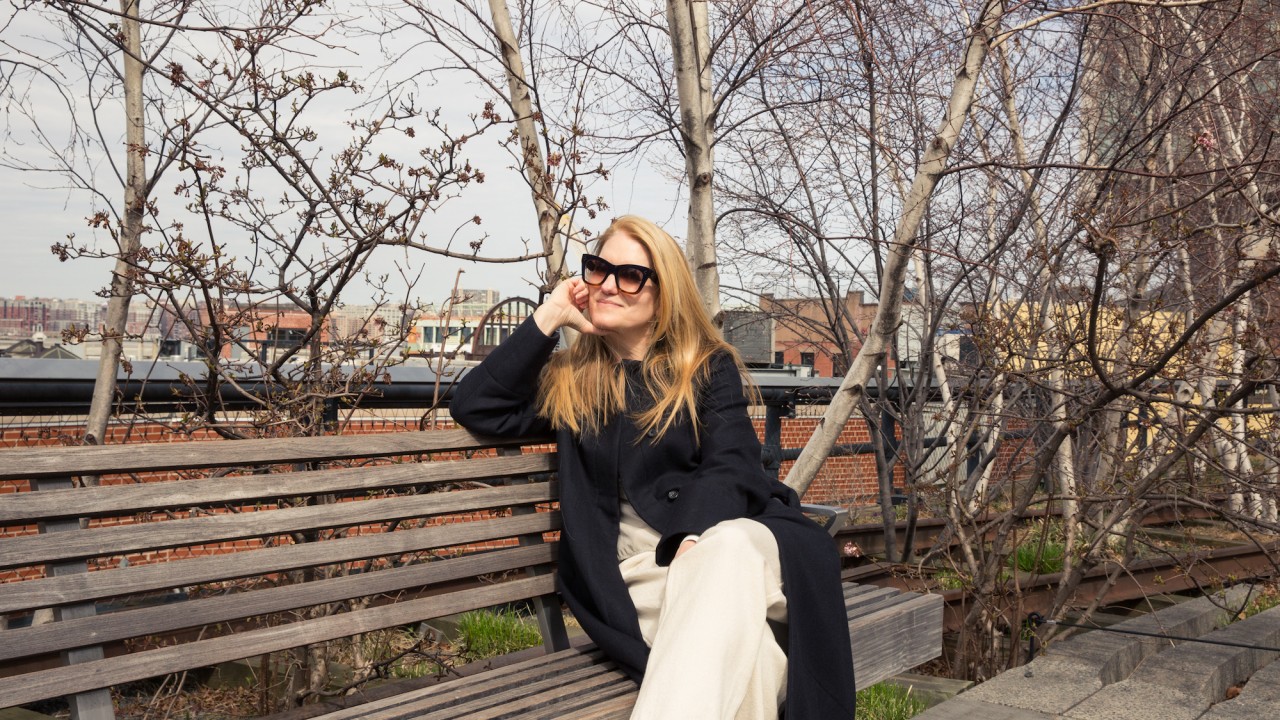 Or on second thought, do. How Jane Larkworthy and Deborah Lippmann bonded over a shared love of theater.

Any time someone passes me on the street freely belting out their favorite song, it makes me smile. They could be terrible and way off-key; it doesn’t matter. They’re in the midst of their imaginary sold-out concert, and their adoring fans are freaking out. Good for them.

Whenever I do this (oh please; like you don’t...), I’m secretly half expecting a record producer to approach and hand me his card.  My song of choice is usually “Satisfied” from Hamilton, and while I usually wail with fairly reckless abandon, every once in a while I lower the volume mid-song to check in. How do I really sound? Am I actually hitting all those notes? ’Cause right now, when the volume’s cranked to eleven, I sound exactly like Renee Elyse Goldsberry—pitch-perfect, clipped diction, nailing every note, never forgetting a word. But when I do that secret Jane soundcheck, it’s just sad. I have neglected my vocal chords, so I sound like a first-round American Idol reject that the network plays for laughs. Time to switch to a Tom Waits song. Those notes I can hit (thanks to a few stupid years of Marlboro Lights…)

I grew up singing and it saved me, in a way. I was an awkward, shy, acne-laden teen who found an outlet in vocalizing. After my parents took me to see Pippin on Broadway in seventh grade, I saved up my money and bought the soundtrack. Every day after school, I would hole up in my bedroom, put the needle to the vinyl, then practice belting—which was basically singing the same song but yelling it. I added Billy Joel’s Turnstiles to the repertoire, then Linda Ronstadt’s Greatest Hits Volume One, and Elvis Costello’s Armed Forces followed soon after. When auditions for the ninth grade musical Bye Bye Birdie rolled around, I yelled—I mean, belted out “Extraordinary” (from Pippin) in my audition and got the lead. That subsequent experience brought me out of my shell and essentially shifted the compass of my formative years in a much happier and more lively direction.

We all have certain hobbies and habits that bond us to others. Fellow runners, fellow foodies, Veep watchers, Barry’s Boot Camp. Singing, however, isn’t usually something most of us get to just break into on a daily basis (if we did, we’d be so obnoxious), so when I discover that someone I’ve known for quite a while also sings, it’s like finding out we’re related. “You’re a singer? Me too!” And since singing is a kind of high, finding others who are familiar with that specific high is, if not bonding, certainly a newfound recognition. When Stellene Volandes revealed that she played Reno Sweeney in her high school production of Anything Goes (and could tap-dance the entire routine) in her first letter from the editor at Town & Country, I thought, SISTER! Ditto for my former colleague Katie Becker [ed note: Katie is Coveteur’s brand-new contributing beauty editor!] when she told me that she’d been in her school choirs. Of course, upon automatically presuming that her repertoire was the same as mine, I was crestfallen upon learning that she didn’t know the entire Brahm’s Requiem by heart.

I’d known that nail polish empress Deborah Lippmann was a singer, and I will never forget the first time I heard her. (By the way, you can see everything Deborah Lippmann did to prep her Tony-nominated clients for the big show here!) It was not in some dark, smoky cabaret, nor was she dressed in a sequined gown and miked, accompanied by piano, percussion and stand-up bass. The setting was the manicure room at Salon AKS in midtown Manhattan. Editors had been invited throughout the day to be treated to Lippmann’s latest polish collection. As ever, I chose the last appointment, so the atmosphere had a relaxed, “we’re almost done” vibe. As I sat atop my pedicure perch, my feet soaking away, Deborah rounded the corner and stuck her head in with a mischievous grin.

“It’s someone’s birthday…” She smiled to me, then her eyes meandered over to Amanda, the publicist who reps her brand.

“May I wish you a proper happy birthday?” Deborah whispered in a playfully flirtatious tone.

And with that, she cleared her throat and set those pipes free. The floor fell away and the walls shook as we gripped our seats. At the penultimate line (“Happy birthday, dear Amanda…”) she lurched up an octave, and we wooted through her final line, our applause encored through the rest of the sprawling salon by patrons who were only privy to the wondrous voice coming from way down the hall.

Deborah and I bonded over more than a mutual love of singing. We just connect. She was the first long interview I did for W’s website. I invited her over to the office one evening, and for two hours we just sat in the beauty closet and talked with my phone on record. She told so many great stories, but my favorites were about performing. Like how she once got to be directed by Stephen Sondheim, or how she almost landed the role of Madame Thenardier in the national touring company of Les Misérables. Over the years, we’ve seen a number of shows together, but not Hamilton, even though we’re a bit competitive about how often each has seen it.

A few weeks ago, she texted me. “Omg, I’m doing Rachel Bay Jones’ nails for the Tonys! You are the only person I know who would be excited for me!”

I was, indeed. Rachel plays the mother in Dear Evan Hansen and was nominated for a Tony. A few days later, Deborah also landed Laura Linney, another nominee, for the same night.

Being a show-tune junkie and former community theater player, I live for the Tony Awards. Purely coincidentally, they’re produced by a childhood friend of my sister's, and she graciously made me her date every year. The season that  Book of Mormon swept the categories, Kate and I lucked out by sitting in the same row as the cast, so the camera was on us constantly. At some point, their glee spread to us, and she and I would  jump up and hug each other every time another award went to the show. The whole thing was pretty hilarious.

When Deborah told me that she was doing the nails for Rachel and Laura, I made it about myself and asked if I could be her date.

“I’m not going, silly,” she explained in a text. “I’m doing their nails in their dressing rooms.” D’oh!

I responded with a mess of excited emojis, and two days later, we were walking into the Music Box Theatre. It was Deborah’s third time seeing the show, and she apologized for the house-right seats not being center.

I’m cheap; I’m used to sitting in the nosebleed section. Our seats were perfect. I lightly slapped her shoulder as we walked closer to the stage. “It’s just better to be in the center,” she shrugged.

“It’s better to be in the orchestra section, period,” I shot back.

The lights went down and Ben Platt killed, as they say. An hour or so in, as Deb’s future client sang her ballad, I leaned in to her.

“You could play that role.”

But she was already there. She turned to me with tears in her eyes and nodded.

That’s the thing about the itch to perform. When you haven’t done it in a while, you miss it like crazy. And when you watch someone singing something that’s right up your alley, it hurts. You wish it were you up there.

I know that I was not good enough to make it as a performer, and I’m fine with not having gone for it. I’m the world’s worst waitress, and taking rejection is not my strong suit. But the desire never leaves.

Doing community theater in my late twenties helped get the ya-yas out, but I gave it up when I felt I’d overstayed my welcome (long story). When I was nearing 40, at the suggestion of my friend Kerry, I put on a concert to celebrate. My friend Jeanne helped me organize the small band, and we kicked out about ten numbers down at the Slipper Room in the East Village. Two more followed over the years, but the last one felt sloppy, and it was also starting to feel like an imposition to ask my friends to sit through it, so I stopped. And now I feel my voice disappearing...

My husband played drums in high school, and he’s recently gotten back into it. He takes lessons every week and practices in our attic every weekend, and I, for one, am jealous. So on that “Evan Hansen” night with Deborah, over dinner, I asked if her voice coach would consider taking on a new student. As it turns out, he would, and  our first lesson is this week. “Bring a piece of music that’s difficult for you to sing,” he explained. “We’ll get you hitting notes you never thought you could.”

I’ve printed out  “Satisfied” by Lin-Manuel Miranda.  I wonder how this coach is at rap...