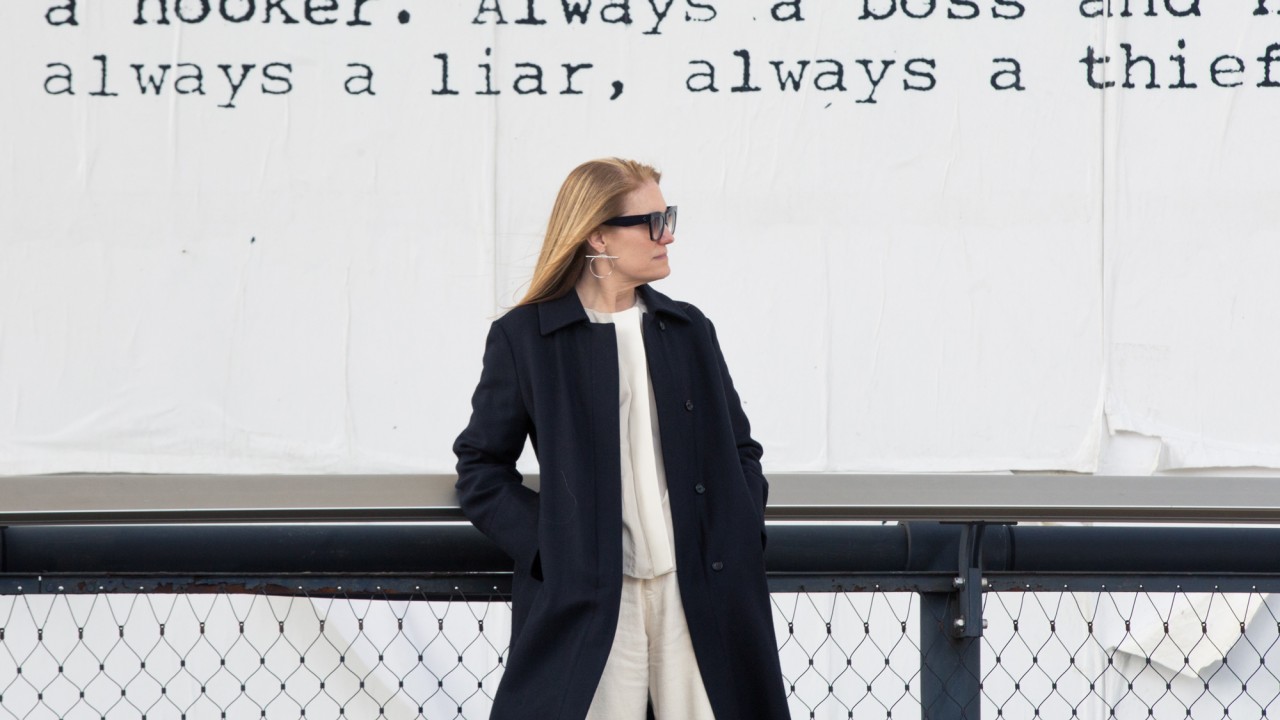 For Crying Out Loud

It had been a stressful few weeks. Working on a project that came with challenging deadlines and a completely new skill set had my stomach clawing its way up into my throat on a daily basis. Having done the same type of job for so many years, being out of my comfort zone was a new and unusual concept—thrilling, but also nerve-racking. On one particularly taxing day, I hit my breaking point and found myself welling up in front of a younger colleague. And then, out they spilled.

How could I be such a baby? She took it like a champ, hardly halting the conversation, but just nodding her head and letting me know she understood and empathized, but I was still embarrassed. I should have been stronger.

Fortunately, tears plus time equals laughter, so when I regaled my weak moment to Shrankhla Holecek, founder of Uma Skin Care, over breakfast a few days later, it was with self-deprecating chuckles.

“Crying is nothing to be embarrassed about!” said Holecek, shaking her head vehemently. “It’s how we express our emotions! We don’t just cry when we’re sad. We cry when we’re emotional or passionate about something. If we’re angry, frustrated, stressed. Women just happen to cry more than men do, and so it’s seen as a sign of weakness. That gets me so mad.”

Yeah. So mad I could cry (I kid). Seriously, though, she brought up a good point. Why is there such a stigma attached to tears?

“I would absolutely not work with anyone who judged a woman for crying,” says Holecek. “I don’t believe I could ever be successful or build a brand with authenticity if I wasn’t allowed to respond authentically to my feelings. Men have long embraced their personalities or idiosyncrasies at the workplace. If they become aggressive or throw something when they’re upset, that almost plays to their strengths in leadership. So women are expected to mirror those kinds of behaviors that don’t come naturally to us?”

I’d never quite thought about it that way until she articulated it. The differences between how genders handle stressful situations reminds me of a man I once worked with who had been, well, stressing me out. We had been disagreeing over something for weeks, pushing back on our respective ends. At some point, he played a card that I could not fight, which let me know in no uncertain terms that it was time for me to acquiesce.

He had finally broken me. He knew that his gruffness had increasingly worn me down, and he continued until he broke me. I took a deep breath and shook my head, struggling to keep the tears in, but my attempt proved futile. Upon seeing my red face, he did not say, “Oh, come on, it’s not that big a deal.” Instead, he yelled at me. “Do not do that, Jane!” he snarled. “Do NOT cry!”

And his growling worked! It shocked me into straightening up, but in reality, all I wanted was for the moment to be over. I wiped my cheeks with a tissue, then stood up.

Translation? Get out of my office, you crazy person who yells at criers. WTF???

In retrospect, I wonder whether my tears were a knee-jerk go-to for sympathy. Could be, but I’m still going to appropriate Shrankhla’s take here. They represented my frustration and anger, and this guy was telling me that they were unacceptable while his yelling at me was completely fine.

Crying should be a perfectly acceptable emotion. In my favorite film, Broadcast News, Holly Hunter’s character is a strong, successful TV news producer, but since she is seen taking a moment each morning to take her phone off the hook (it’s an old movie) and let out a few heaving wails, she is depicted as something of a mess. “God help me,” she mumbles after every cry. It’s played for comedy, but the message she sends is “I’m a mess.”

I grant that tears are messy, sure. But they shouldn’t represent messes in human form! While we’re on the subject, why do tears make us so uncomfortable when we’re not the ones shedding them? “Oh, don’t cry!” we urge, reaching for a tissue, a joke, anything to make our friend or colleague stop.

For years after my mother died, any time my father would start to reminisce about the good old days with her, he’d invariably become teary-eyed, and his voice would crack. Cue the daughter jumping in to change the subject, stat! I was too afraid that if he cried, he would fall to pieces, and I would be unable to put him back together again. What an idiot I was. A good cry would have been a purge he could have benefited greatly from, and I now regret not allowing it, all because I was too controlling.

And I still am. Before that recent afternoon, I couldn’t recall when I had last shed a tear. But that day ended up being a doozy. It began when I saw Taryn Toomey at Tenoverten that morning. She was there to promote her nail collection with the salon, and when I bemoaned that I was too busy to stay for a manicure, she touched my arm.

“Come to my class tonight,” she said, leaning in. “So many women keep telling me they’re so stressed out, and they’re all coming. I’ll save a spot for you.”

Taryn’s mere gesture of touching my arm let me know that she could help. I had read about Toomey’s The Class basically everywhere, but had never been. Was it a workout? Guided meditation? Would it be hard? Would I faint? Would I roll my eyes and walk out? Didn’t matter; her touch said, “Come.” So I did.

After hastily picking up workout pants and a t-shirt at Urban Outfitters, I zipped over to her new Tribeca location and found a spot to quietly hide in the back row. As the early evening light imparted a warm glow through the slowly filling studio, Toomey walked among us.

“Who here has never taken the Class before?” she asked. A number of us raised our hands. She squatted down to each of us. “There is no right or wrong way of doing this class,” she explained with her unwavering gaze. “Listen to your body.”

And with that, the tears brimmed. I looked around; no one else appeared dewy-eyed. Strangely, though, I wasn’t embarrassed. I was as psyched as my tear ducts.

The Class started slowly; fluid, flowing movements accompanied by Toomey’s nurturing words, which turned on the waterworks as I tried in vain to hold them back. “Keep it together, Jane,” I thought to myself. “She’s just saying, ‘Welcome to the Class.’ Don’t you think you’re jumping the gun just a bit?” But I couldn’t help it. As they began streaming down, I gave in to their early arrival, wiping my cheeks with the occasional shirt sleeve.

Within a minute or two, Toomey had us pounding out angry and loud jumping jacks to intense drum-beat music. Ten more minutes in, we had entered primo primal territory. She encouraged us to shake our bodies out any way that felt right, practically egging us on to kick the air, whip our torsos forward and back, yelling, huffing, grunting. It felt fantastic.

“Don’t look at the mirror,” she yelled. That made me laugh. It was such a relief to not to give a shit about how ridiculously uncoordinated I looked.

“We’re so fucking tired of being told we can’t do something,” Toomey’s voice calmly preached, slowly crescendoing in intensity. “Told that we’re not good enough. Well, that’s gonna stop. No more. Get mad. Get fucking mad.”

Suddenly I envisioned “Do not cry!” guy in front of me. Taryn’s words had conjured him. I had cried to him that afternoon years ago because I was fucking mad, but I had been too meek to tell him NO. So I did what everyone else in the room was doing by that point. I shoved his imagined chest and shoulders with my arms and let out a wail that sounded like something akin to what Florence Welch and Chubaka’s baby would sound like.

Another quick glance around the room confirmed what I had hoped: just about everyone else had found her own bully and was also fighting back. To gild my own bully lily, I let a few “Go fuck yourselfs!” fly for the hell of it. I was on fire.

The Class eased to its finish with a calming, eyes-closed meditation, and the tears were put on mute, my entire face squished into downward scrunching sog. As I lay there, listening to Toomey’s soothing words, my breath finally slowed and my cheeks began to dry. We had finally hit empty.

When the lights came up and the music turned down, I sat for a moment in a slight state of shock from this purge whose depths had surprised me. I knew I had had some anger buried down there, but I had not expected quite the exorcism. I felt like John Coffey in The Green Mile—totally spent, but victorious and healing. I felt so. much. lighter.

Along with the physical and mental check-ins that she encouraged through the class ("How are you feeling?" No, not "what are you thinking," how are you feeling?"), it is Taryn’s gospel that has stayed with me: It’s okay to be angry, and it’s normal to feel frustrated. And crying is not a weakness. But what’s equally important is to kick those negative feelings and those asshole bullies out, because festering is such an unhealthy alternative. And festering is no way to go through life.

Like smoothie bowls and Harry Styles going solo, I have hope that crying will someday be accepted as normal—embraced, even. Until then, I return to the safety of Taryn’s sanctuary.

So next time you find yourself crying in public? First, give yourself a break; next, reach for these products, which will help you de-puff and let your eyes return to their normal hue.

Shop Item
Part of the series: