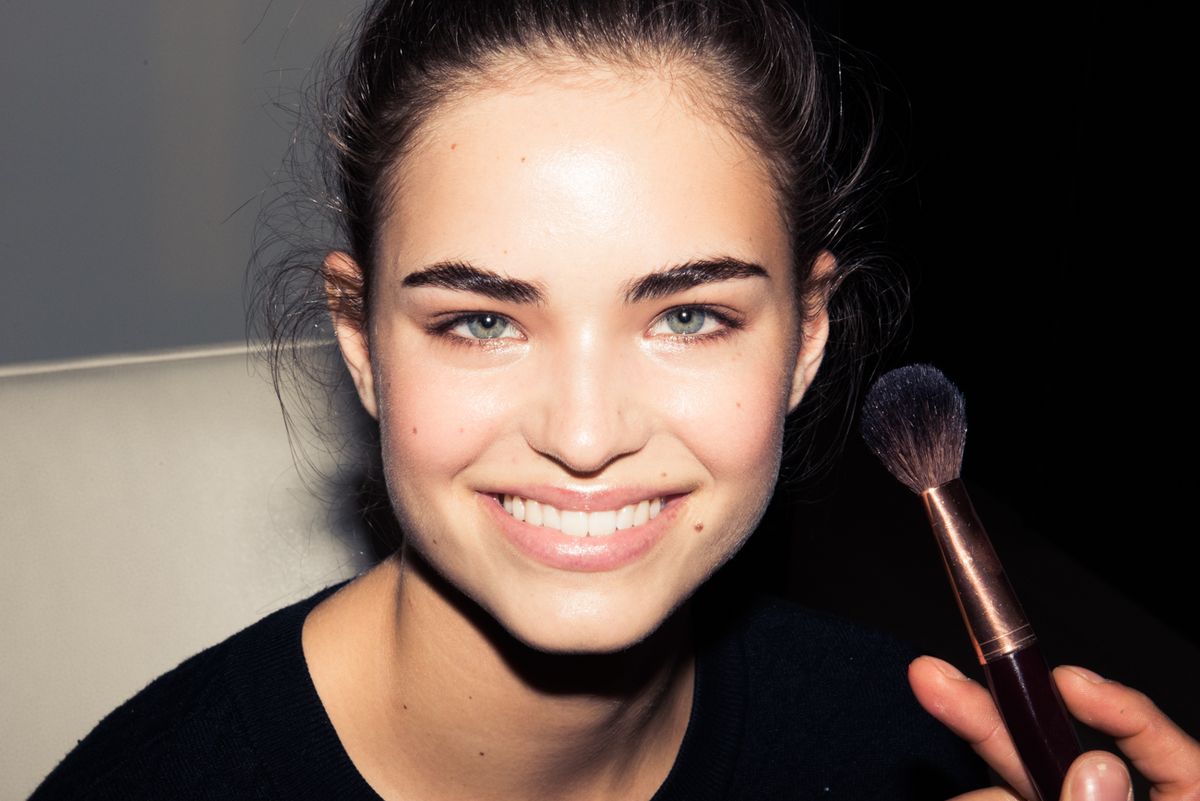 We hit the backstreets to find out just how much power is behind the puff.

I’ve never had to enter an unmarked door in a back alley to get my hands on the latest beauty fad before, but it’s the lengths I’m driven to in trying to score some weed-based body cream, because marijuana isn’t actually legal in Canada until July, 2018 without a prescription. I really should have thought about that before I decided to write a story on whether cannabinoids like THC and CBD (molecules of the cannabis plant that won’t get you high when applied topically, but are more potent than old-fashioned hemp seed oil) really are the new cure-all Argan oil, as headlines of late would suggest.

Last month, a research report out of the University of Colorado School of Medicine—the first state to legalize weed for recreational use in 2012—was published on the topic of cannabinoids in dermatology. After reviewing the handful of studies done to date, the team of dermatologists summarized that cannabis plant extracts like THC and CBD have indeed been proven to reduce inflammation and itch in cases of psoriasis, eczema, and allergic dermatitis when applied to the skin.

I chatted with Dr. Robert Dellavalle, one of the professors who compiled the report, to find out what this could mean for the future of skincare. “If it’s going to reduce inflammation, there could be a cosmetic use as well.” Turns out, Mary Jane might be the answer to vanity ailments like acne, redness, even wrinkles. And here’s why: Our skin actually has receptors for cannabinoids the same way our brain does. “It’s a very complex system that we’ve only begun to scratch the surface [of] in terms of what they can potentially do,” he says.

I can see why it’s taking a while. I myself am having more trouble scoring CBD cream than I am an actual joint. Hence, my Facebook callout to the pot-puffing community, who direct me to Tania Lungo, former co-owner of Queens of Cannabis, a local femme-friendly dispensary that was shut down in January when paranoid landlords locked them out. I’m sitting in Lungo’s kitchen, pickle jars of palm-sized cannabis stalks around me, as she explains the process for distilling her homemade CBD everything balm (boil down leaves in coconut oil, strain in cheesecloth, allow to dry to a vomit-yellow balm), which she personally likes to use on her hair and on her face to moisturize and ward off monthly pimples and even fine lines. I go home with an unmarked dime bag of the goop, which gives my bum knee a mild, localized sense of chill that lasts for about an hour.

Of course, I had reached out to some legit, CBD-boasting skincare brands in the U.S. (like Whoopi & Maya, whose body lotion and bath salts line started when the TV host wanted to market the panacea to her menstrual cramps) but duh, none could be shipped over the border. So like that time we had our intern sign up for Kylie’s app just to find out when her next Lip Kit would land, I’m once again at the mercy of a hotly anticipated release date, this one care of Trudeau.

Until then, we can take some celebrities’ word for it. In the laxer state of California, purveyors of pot Lord Jones, with their line of sugarcoated edibles and chicly packaged CBD-rich body lotion (the latter available in two degrees of potency, depending on which state you live in), have cinched a star following that includes Olivia Wilde, Kelly Oxford, and Sarah Silverman. Jessica Seinfeld Instagrammed that in addition to the Pain & Body Wellness Formula Body Lotion’s intended result—to soothe sore joints and muscles—it also relieves sunburn and bug bites. Co-founder Cindy Copobianco, a former editor at Vogue and Allure, wrote me: “We have a patient who applies it to her hands at night, and her soft, peeling nails are now strong—a benefit we never imagined or knew!”

Yes, the cannabis crowd is growing increasingly sophisticated, as is the merch. It’s a demographic not lost on Seattle-based Van der Pop, a brand of slick toking accessories in the esthetic of Mansur Gavriel (think slim, made-in-Italy leather stash pouches that could double as a clutch, fastened with a 3-digit lock).Designer-slash-founder April Pride is currently developing a THC-infused line of skincare products, which VdP will sell in stores (in states where it's legal) along with a co-branded version with min-modern smokewares shop Tokyo Smoke.

Until then, Van der Pop is launching a range of hemp seed oil beauty products in just a few days. Hemp seed oil contains less than 0.3% THC concentration, and therefore has been used widely in skincare already. “Hemp seeds contain all kinds of goodness, like vitamins A and E, omega-3 and omega-6 fatty acids, and it’s high in antioxidants,” says Pride. When the 5-piece range of all-natural serums and pimple-clearing creams arrive in their sleek black lacquer jars, I’m reminded of the antique ashtray given to me by my grandmother, and the skin-softening balm leaves my hands silky until evening.

Of course, The Body Shop has been hitting the hemp since the early ’90s, with its signature soap on a rope—a clunky marijuana leaf. I asked the brand’s beauty botanist, Jennifer Hirsch, whether she could imagine a day that The Body Shop’s hemp range could be souped up to CBD-grade as legalization around the world becomes a reality. And while she couldn’t speak to the company’s future re-formulation plans, she has personally been following the growing body of scientific research supporting the medicinal potential of Cannabis sativa extracts with interest. “To be honest, I think if medical researchers had popularized cannabis before it reached popularity as a recreational drug, it would be powering prescriptions behind the counter at pharmacies across the globe,” says Hirsch.

I asked British Columbia-based derm Dr. Shannon Humphreys whether she’d recommend CBD skincare products to treat anything from serious itch to fluffier skin conditions like hyperpigmentation. “One of the challenges for me as a physician is that consumer demand at this point has far outweighed any scientific evidence to support their use,” she replied, though some of her patients have been asking. “In order to incorporate it into the mainstream, we need to see some evidence a) that it works and b) that it’s safe.”

To treat eczema maybe, but wrinkles—really? Resident dermatologist for The Body Shop, Dr. Christine Choi Kim, says it wouldn’t surprise her at all if in the near future more studies emerge exploring the cosmetic application possibilities of cannabinoids. “The field of dermatology is filled with examples of serendipitous discoveries, trying FDA- approved therapies for ‘off- label’ indications,” says Dr. Kim. “Who would have thought that botulinum toxin would be used to smooth wrinkles? Or that platelet-rich plasma would go from being called a gimmicky ‘vampire facial’ to now being injected into the scalp for treatment of alopecia?”

As for my own experiment? Let me take another hit and get back to you.