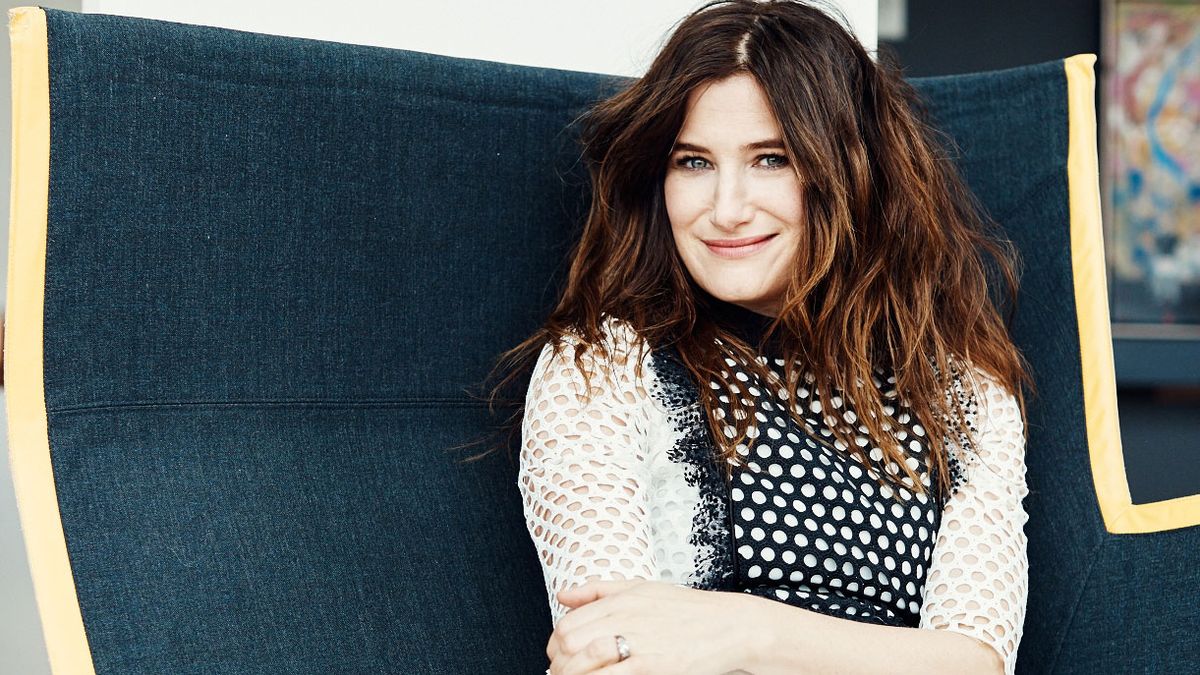 Why Kathryn Hahn Is Optimistic about American Politics

Kathryn Hahn isn’t thrilled about the current state of affairs, but she’s trying to look at the silver lining.

“We’re entering a brave new world of art-making, and it feels very reactionary,” Hahn explains over coffee (almond milk, brown sugar) at Hotel Indigo on Manhattan’s Lower East Side. “It’s a bummer all this creativity has to happen because of a shitshow...but historically, it’s been politically charged times like these—times when people feel their rights are getting taken away—that artists stand up and speak.”

One of Hollywood’s most respected character actors, Hahn has spent decades honing her voice in films, network television, and most recently, web-streaming series. But it’s a journey that really began in the Ohio suburb of Cleveland Heights.

“From pre-kindergarten, [acting] was the only thing I seriously considered,” Hahn remembers with a broad smile. “You know how kids go deep into playing pretend? Well, I was basically in a fugue state from school until dinner.”

Hahn spent hours embedded in imaginary worlds, all while her mother watched and indulged from the sidelines. Her favorite character? Anyone from Laura Ingalls Wilder’s Little House on the Prairie.

“I went deep into pioneer town,” Hahn laughs. “I did my homework by candlelight, which I still can’t believe my mom let me do. I even wore her panty hose on my head with bows on the end to pretend I had long braids. My ultimate goal was to do laundry by hand.”

After earning degrees from both Northwestern and Yale, Hahn seamlessly transitioned from pioneer playtime to “I wore this dress on Kimmel last night, do you like it?”—a transition so seamless, in fact, that many didn’t notice her arrival.

“I wasn’t chasing fame; I was chasing that feeling I got back home with those tights on my head.”

Which pretty much brings us to today. (Casually skipping Hahn’s head-turning stints in How to Lose a Guy in 10 Days, Captain Fantastic, The Holiday and too many others to mention.)

She currently stars in two projects: FLOWER, Max Winkler’s dark comedy that was the first film to sell out of this year’s Tribeca Film Festival, and Jill Soloway’s I Love Dick, a bombastic Amazon series exploring a writer’s psycho-sexual obsession with the eponymous “Dick.” (You can catch the pilot now.)

“The thing about indie film, like FLOWER, and streaming shows, like I Love Dick, is that they can take risks the traditional industry can’t,” Hahn continues. “Just imagine what a commitment it is to go to the movies these days—you have to get a sitter, call an Uber, pay $17 for a ticket. So when you make that commitment, you want an event film that feels different on the big screen…that, or you want a kids’ flick that gets you the fuck out of the house on a Sunday afternoon.”

One could interpret this to mean Hahn has turned her back on traditional Hollywood. And while she does have her concerns, the warm 43-year-old is hardly suggesting we send the old guard—like network TV—to its grave.

“Not only do I think both worlds can exist, but they need to exist,” she continues. “It takes a lot to get access to streaming shows—you need a computer, sometimes you need a subscription. Thank god for the big three networks that are still providing free creative content to people who don’t have access. I couldn’t imagine our world without them.”

Which brings us back to where we started: a simmering America in which emotions are spurning artists across the country, including Hahn, to be more creative than ever. But what specifically gets Hahn’s blood boiling?

“If PBS and NPR went away, that, to me, would feel like the crumbling of our democracy,” Hahn finishes on a serious note. “They’re the cornerstone of our culture, and it’s disgusting that it’s even a possibility. I’ll fight it tooth and nail.”