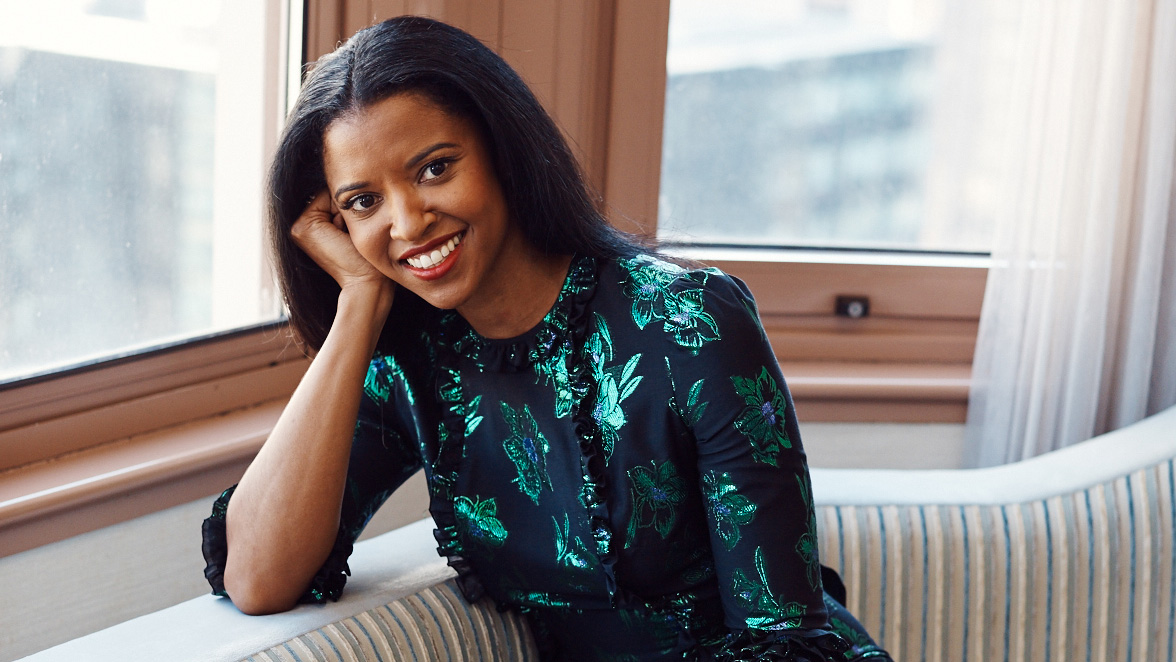 But, the actress says there *are* similarities.

When actress Renée Elise Goldsberry talks, she looks you directly in the eye, devoting her full attention to the conversation at hand. Her voice is soothing—like a mother’s, but also somewhat like a song—and everything she says seems well-thought out and genuine, all at the same time. You feel yourself hanging onto her every word, wanting to know more, watching her expressions. And suddenly, you understand why Renée’s so darn good at her job.

It’s likely why the Hamilton star was cast as the title role in HBO’s new (and Oprah-produced) film, The Immortal Life of Henrietta Lacks. The real-life story—about a woman whose cervical cancer cells were harvested without permission, later leading to medical breakthroughs—is one that could use the help of a good storyteller. Read on for why Renée is the perfect person to take on that job, as well as where she draws inspiration from and why she’ll never really be done with Angelica Schuyler. 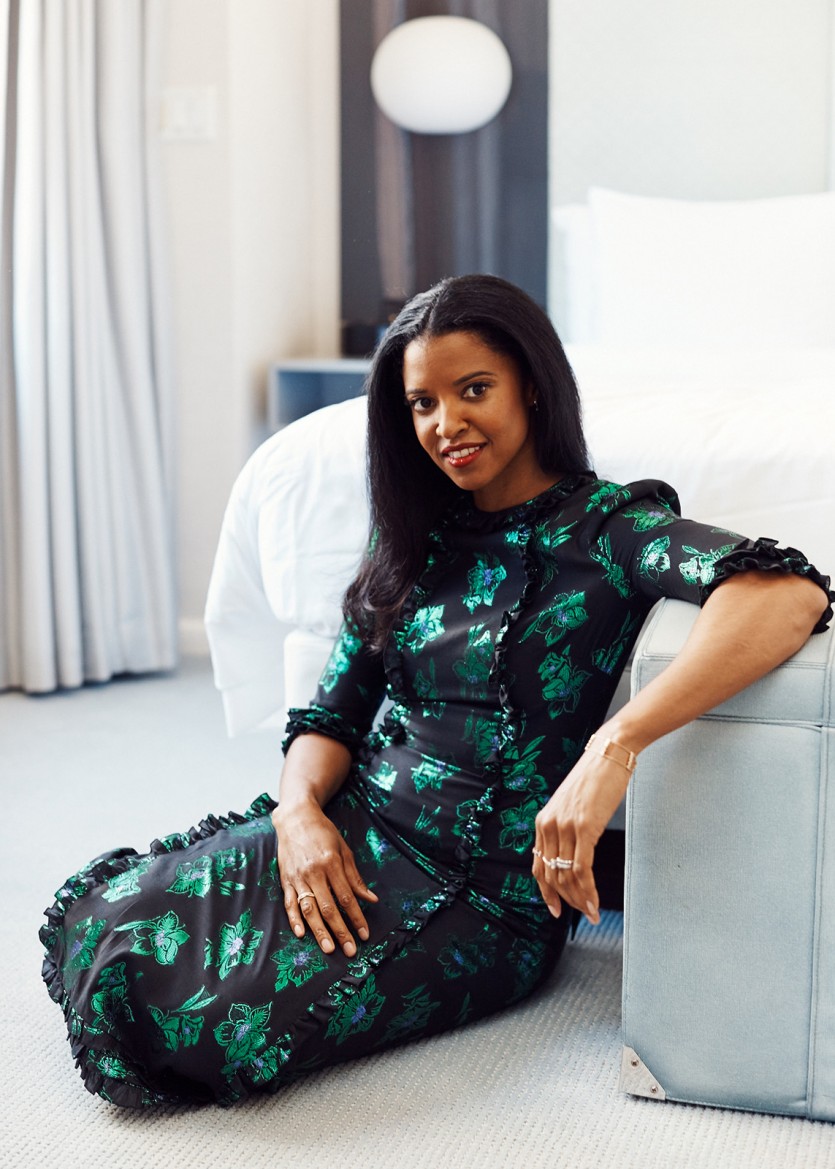 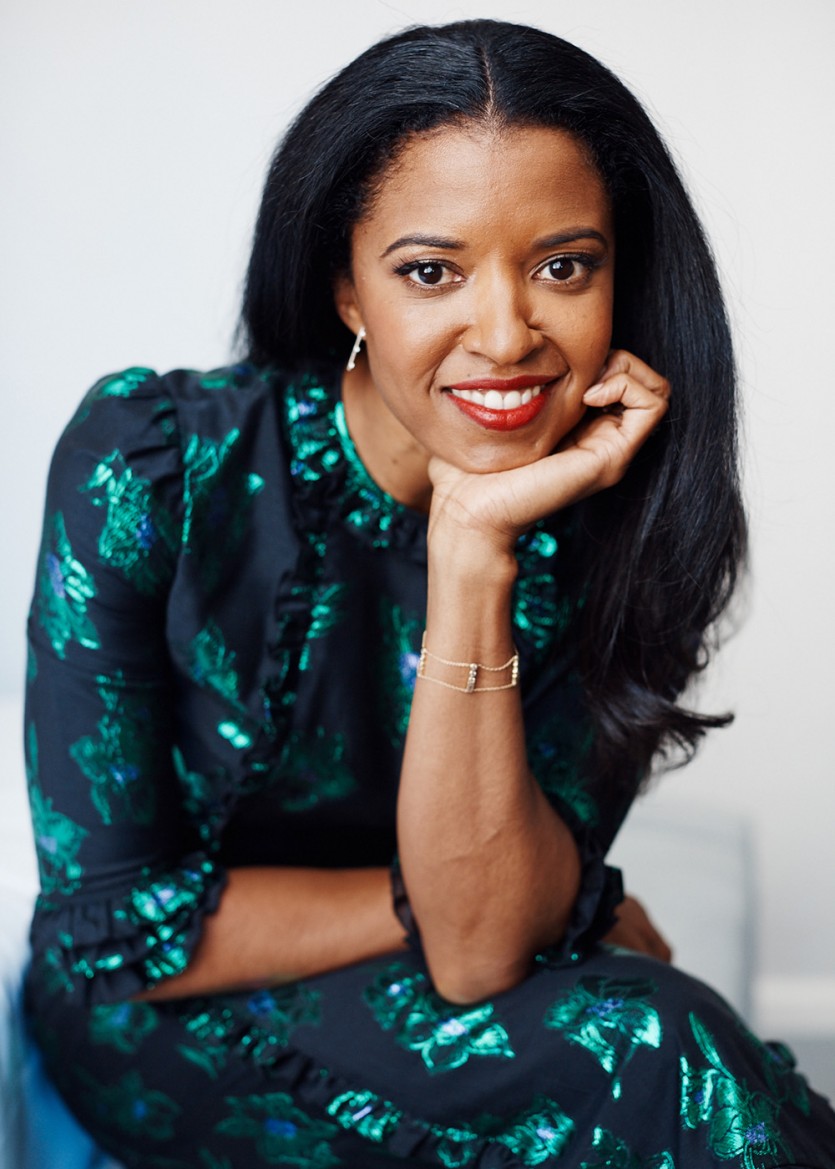 Why the story of Henrietta Lacks was an important one for her to share:

“This opportunity fell in my lap, but I can’t imagine it was an accident. People ask me all the time, what are you going to do after Hamilton? Well, this is the first thing that I did after Hamilton, and I’m constantly amazed at all of the similarities between the stories. Here is this woman whose legacy is hugely impactful to every human being walking on the planet, and nobody knows who she is, her name, what her story is. When we look at Hamilton, there was an awareness that they had at the time, of the value of a legacy, and I don't know that we, specifically as African-Americans, recognize how valuable our legacies are. Even if we didn’t fight in that particular Revolutionary War and become a face on some currency. Even if we didn’t start the financial system as we know it. There’s something extremely instrumental in everything about us—even the things that are seemingly the most destructive can be so powerful. I love the fact that Alexander Hamilton was this really powerful person and Henrietta was seemingly not powerful, but when you uncover her legacy, you realize that she was extremely powerful, and continues to be.”

What it was like working with Oprah and the rest of the cast:

“I am not in scenes with this brilliant ensemble cast. So many of them live closer to present tense, and all my scenes were pre-1951. I saw them in the trailer, which makes me really enjoy the opportunity to do press with them. I also say it makes me the most objective when I watch the film, because I’m not thinking, ‘Oh we were laughing that day because…’ I’m actually thinking, ‘Wow, these actors are really brilliant.’ They had a very hard job embodying people—some of whom are still here—and they did it with such bravery and such grace that I’m crying at the end of the movie because it’s so well-done and beautiful.” 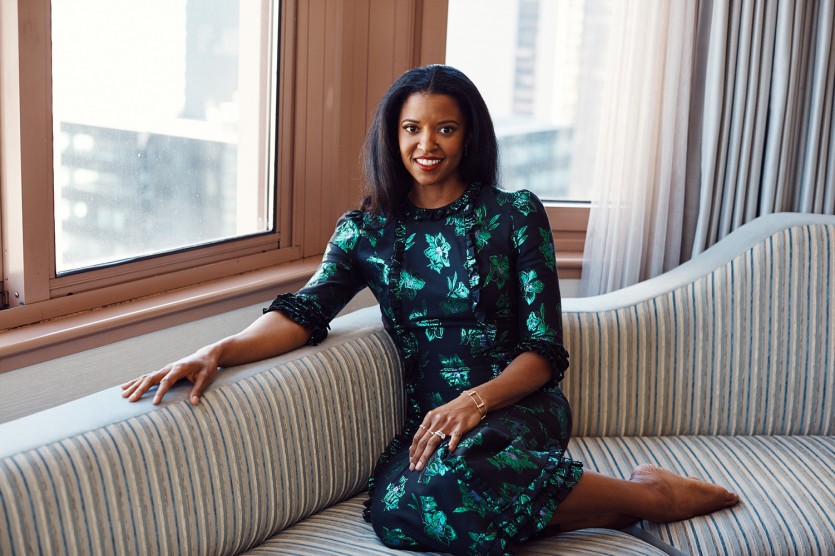 Why she’ll never *truly* be done with Hamilton:

“I don’t think you move on as much as you move away from something. I often say I have the reward of Hamilton without the responsibility right now. I’m still connected to those people and to that music and to that story and to that experience. I will always be indebted to every person that invited me on that journey, and I will forever be changed by Angelica Schuyler, the relationships that I had on that stage, and the relationship I have with the world from when they discovered it. It’s life-changing in the best way. Gratefully, I’ve left shows before and I know that you don’t leave. There’s always a part of you that’s Mimi from Rent, there’s always a part of you that’s Evangeline Williamson from One Life to Live. Whatever you do, that part of you that came to the surface while telling that story is always there. I’m forever changed and forever grateful.”

“I play this woman Quellcrist Falconer in a sci-fi, futuristic, adventure-thriller. It’s the opposite seeming from Angelica and Henrietta, even though, of course, there are strong similarities. Wardrobe alone, totally different woman. But also powerful in really important ways.” 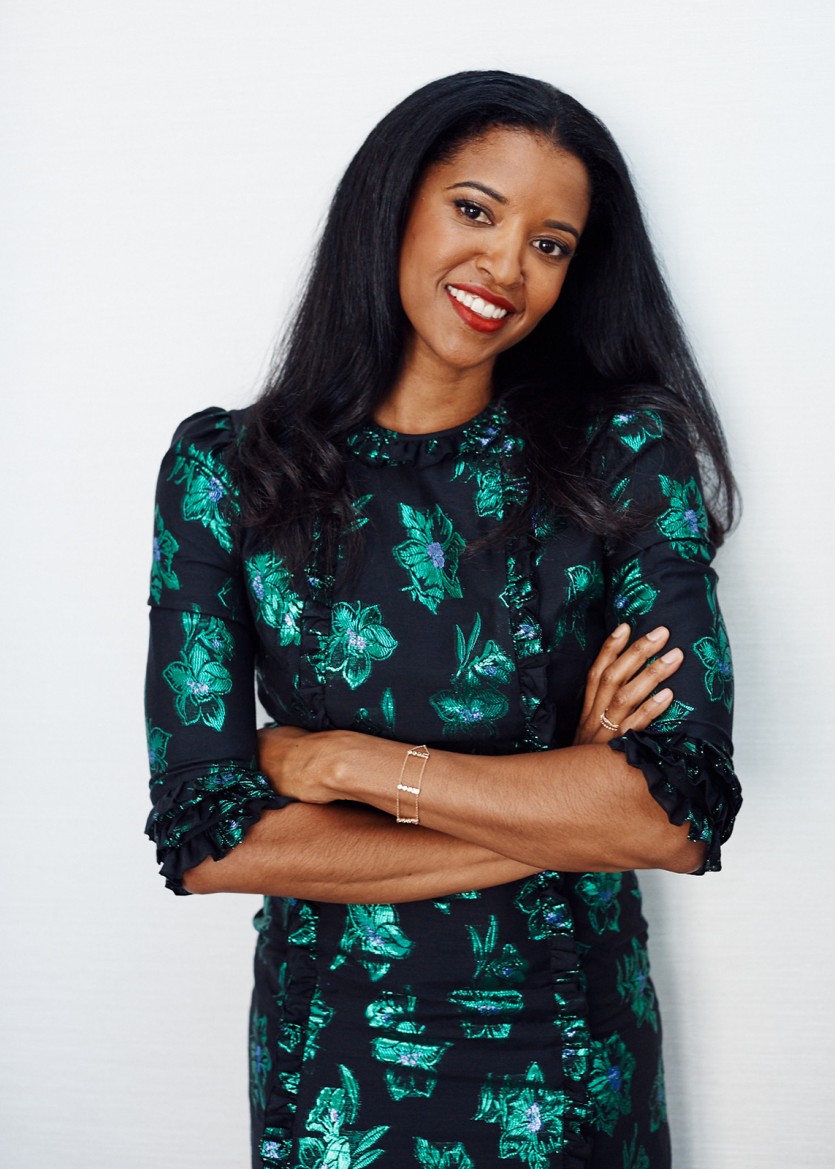 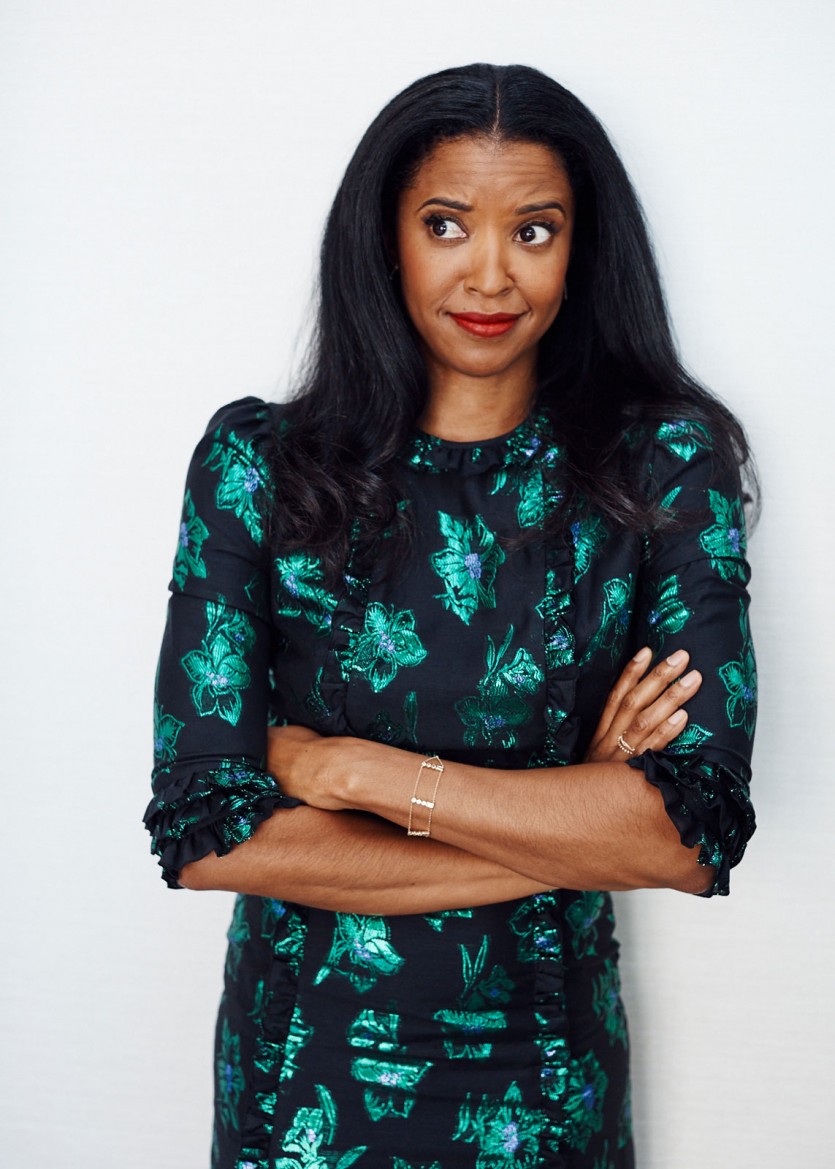 Where she draws her inspiration from:

“My mother is a fountain of wisdom. Since I was a very little girl, she’s always, just off the top of her head, said so many truisms that stuck with me. I wish I could write them all down, and I’m trying to find some of my own to share with my children. She’s really one of the greatest resources I have for playing a strong woman. There are so many beautiful [strong women] that are being written right now, and I’ve played so many. And whether they are from the turn of the century or revolutionary women, whether they are poor, beautiful black women from the South in the late ’40s, or whether they are from hundreds of years from now in an imaginary world that we hope we don’t inhabit, Betty Sanders, my mother, has qualities that work when I’m trying to find the power of those characters.”

The advice she has for women who are feeling defeated:

“Connect yourself with people that are also afraid but still doing it. Find a source to tap into that helps you increase your faith in yourself and helps diminish the fear that anything that goes wrong will stop you from moving forward.”

What the future has in store for her:

“In my future, I see continued juggling of my career and being a good wife and mother. I’m excited to continue telling stories about women who validate my own experiences, and give me the ability to recognize that where I am is already enough. There’s so much more to do, but I think that’s easier to see when you look at other women. You think, ‘Wow she’s really doing it.’ But wait a minute—I did some of those things too. I’m on the journey, and that should inspire us to keep moving forward.”