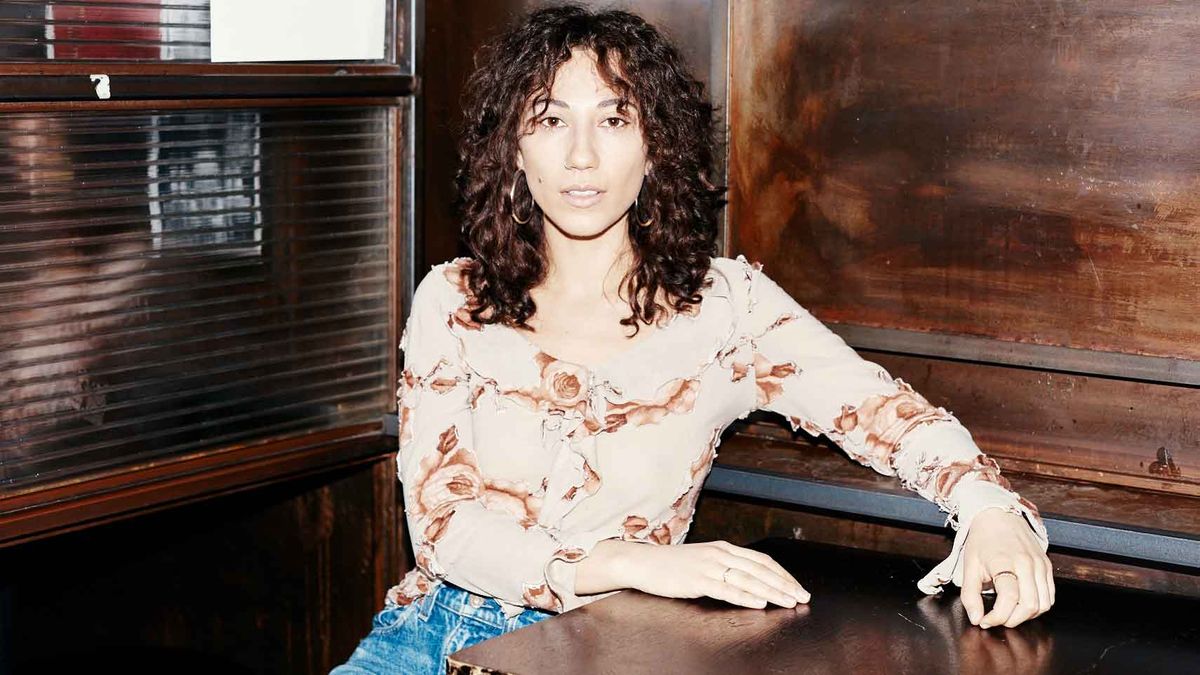 We’re Calling This the Album of the Summer

Tei Shi wrote to Britney Spears as a kid, and now she’s touring with the likes of Grimes and Mø.

I saw Tei Shi perform for the first time in 2013. I was visiting New York for work, and a close friend took me to see her new friend perform in a tiny venue as part of the now-defunct indie music festival CMJ Music Marathon. That new friend was Valerie Teicher, aka Tei Shi. It was the first time I met her, and even I could tell she was nervous, but the room was full of friends and family, and the energy was incredible.

Since that first performance, the Argentine-born, Bogota- and Vancouver-raised singer released two LPs—the single off one, “Bassically,” blew up (you’ve probably heard it without realizing). That same song was picked up on an episode of Girls.

She’s played at the likes of Coachella and Electric Forest, toured with artists like Grimes, Mø, Years & Years, and Jungle. When she’s onstage, she transforms into the kind of person every woman wants to be: totally in control, and yet extraordinarily expressive. She was also signed by Downtown Records and spent the past two years creating an album, Crawl Space, which was finally released two weeks ago. Since that first meeting, she and I have also become friends.

I won’t go into how amazing it is to see her career and work grow in such a huge way on a personal level. But what I can say is that, as someone who is drawn to new and exciting things, Crawl Space is a great album. And also, while she’s reticent to talk about it, Tei Shi is extremely savvy when it comes to fashion and her ~look~ (she went all-out and got a perm for this album release and tour). More on that below, along with other snippets of our conversation (her childhood correspondence with Britney Spears; the platform social media has given female artists) while chatting at St. Vitus in Greenpoint. We suggest listening to her album while you read.

ER: One of my favorite parts of the album are the voice notes from when you were a kid. How did you find those?

TS: “I had forgotten about them! Three years ago, I went home to Vancouver and was in my sister’s room and saw that she had one of them. I got flashbacks. I listened through it, and it was hilarious. They’re a mix of me singing and talking to myself, making up little songs, and then my sister would come into the room and start laughing and fighting. I think I must have been nine or ten. I knew I wanted to use them somehow when I made an album, so when I went home in the summer—I was just finishing the album—and looked through old boxes and found more, and then chose the little pieces you hear on the album.”

ER: What would your 10-year-old self think now?

TS: “I think she would be really stoked. And maybe a bit disappointed—”

ER: That you’re not Britney [Spears]?

TS: “Yeah. One of the things that’s interesting for me in rediscovering those tapes is remembering how much I wanted to be a singer and performer. I was so passionate about it when I was little. It’s cool that it’s come full circle, and I’m putting out an album and doing this full-time. But there’s also the fact that it’s a very different reality than what I imagined when I was nine or ten. Maybe I’d look at myself now and be like, ‘Why aren’t you selling out arenas?’ That felt like success then. It’s the difference between the expectations of a nine-year-old and the reality of a 27-year-old.”

ER: Did you hang on to that desire to be a singer and perform through your entire teenage-hood?

TS: “I did deep down. But I really wanted it until I became a teenager. My mom put me in singing lessons for a few months when I was 11. I really hated it, and that made me think I couldn’t be a singer. I remember at one point, my teacher told me I had to take an exam if I wanted to be a serious singer, and I wrote Britney Spears a letter being like, ‘Britney, my teacher says if I don’t take this exam, I’m never going to be a singer. I just want to know if you took it.’ [laughs] But as you grow up, those dreams get buried. You start thinking about college and real life, and there was never a reference point for me of how to become a singer. It disappeared for a while. When I decided to go to music school, that was the beginning of me making decisions to try to get into music.”

ER: I remember your first show, which was—what?—four and a half years ago? When you were first starting to perform, how did you decide that you were going to write your own music and really put yourself out there as an artist?

TS: “It was really gradual. The first thing was that I’d had all these songs that I’d written and had in the works from when I was in school, and I decided I was going to make an EP out of that. At school, I wasn’t sharing my music with people. When I made the EP, I showed it to a few friends, and a blog put it up. The first one was “M&Ms.” It caught on online, and to me that was crazy. And that gave me the motivation to put out the rest of the EP—I realized that people would listen to this. From there, everything else came with playing live. It was a combination of smaller decisions and luck and opportunity.”

ER: What does it feel like now that the full album is out in the world? I guess it’s only been a few days...

TS: “It feels really weird because nothing’s changed, and you’ve put so much into this thing in a way where it feels like something in your life is going to change when it’s out there, but it doesn’t. But at the same time, it’s also very different. I felt like I had this very private secret to myself for a long time that was something that I was nurturing and making on my own—it was mine. Now that it’s out, it’s like I’ve lost that thing with myself, and I feel very distanced from it in a lot of ways. This is really hyperbolic, but it does, in a way, feel like it might when you parent a child, and then he or she is out in the world, and you have to watch it from afar.”

“I’d look at myself now and be like, ‘Why aren’t you selling out arenas?’ That felt like success then. It’s the difference between the expectations of a nine-year-old and the reality of a 27-year-old.”

ER: That’s the craziest part to me about what you do. You spend all this time creating by yourself; then you bring it to your band and producers; then you share it with everyone. To me, that seems really hard—putting it out there and making people participate in it.

TS: “It is really hard. It’s one of the weirder parts of it. It used to be really hard for me to share things with people and ask them to be a part of it. It gets easier, and it makes you separate yourself from it a bit. You develop two personalities—one is very emotional and personal, and then there’s the you that can’t think about that and understands that you need to set your more vulnerable side aside.”

ER: Can we talk a little bit about your look for the album? You got a perm...

TS: “I really like changing my hair. It’s one of the things that’s easiest to change about your appearance and still gives you such a different look. I’ve always really enjoyed switching it up, but I dyed my hair so much for the past few years that it got fried and lost a lot of its shape. I wanted to do something with it, but I didn’t want to dye it again. I’ve always really liked curly hair, and I wanted to keep it natural-looking. When I was starting to prepare for the album, I wanted something visually cohesive, so I got a perm.”

ER: In terms of how you want to be seen as a new artist, how important is your look, the visuals that you put out, social media?

TS: “I know it’s important; and I’ve learned to enjoy it and want to put my appearance out there more. I love fashion, and I have a lot of fun with it, but I also want the music to speak for itself, and people sometimes see a young girl enjoying her appearance and somehow that undermines the music and artistry. Sometimes I’m wary of focusing too much on talking about that stuff. But, at the same time, it’s really empowering, too, and so many of my favorite artists have such a spot-on look, and they aren’t afraid to be really out there with it. It’s a really awesome thing to be able to play with. But, for me, I want the music to be the thing that people talk or think about more so than what I’m wearing.”

ER: Who are you inspired by?

ER: Do you think the industry is becoming more supportive of women? What has your own experience been as you’ve become more established?

TS: “I think it’s better in the sense that now artists have the ability to have their voice be on a platform that’s separate from the people who are running their career. People can be very open about their own personalities or their own experiences, and I don’t think you would ever get that pre-social media. A lot of young girls are able to go online and see all of these women who have started their careers in social media or online, and that’s really amazing and has made the industry a lot better because it’s put control in the hands of the artists. But there are dynamics that are really hard to break—there’s still a long way to go. There are still a lot of double standards in the way female artists are treated versus their male counterparts. The way that people talk about female artists in the industry is something that I still confront often. Even in the words a lot of people use to describe female artists are really different than the words that people use to describe male artists; there’s a lot of subconscious and subliminal diminishing and patronizing language. But the fact that we have our own platform now with social media makes a huge difference.”