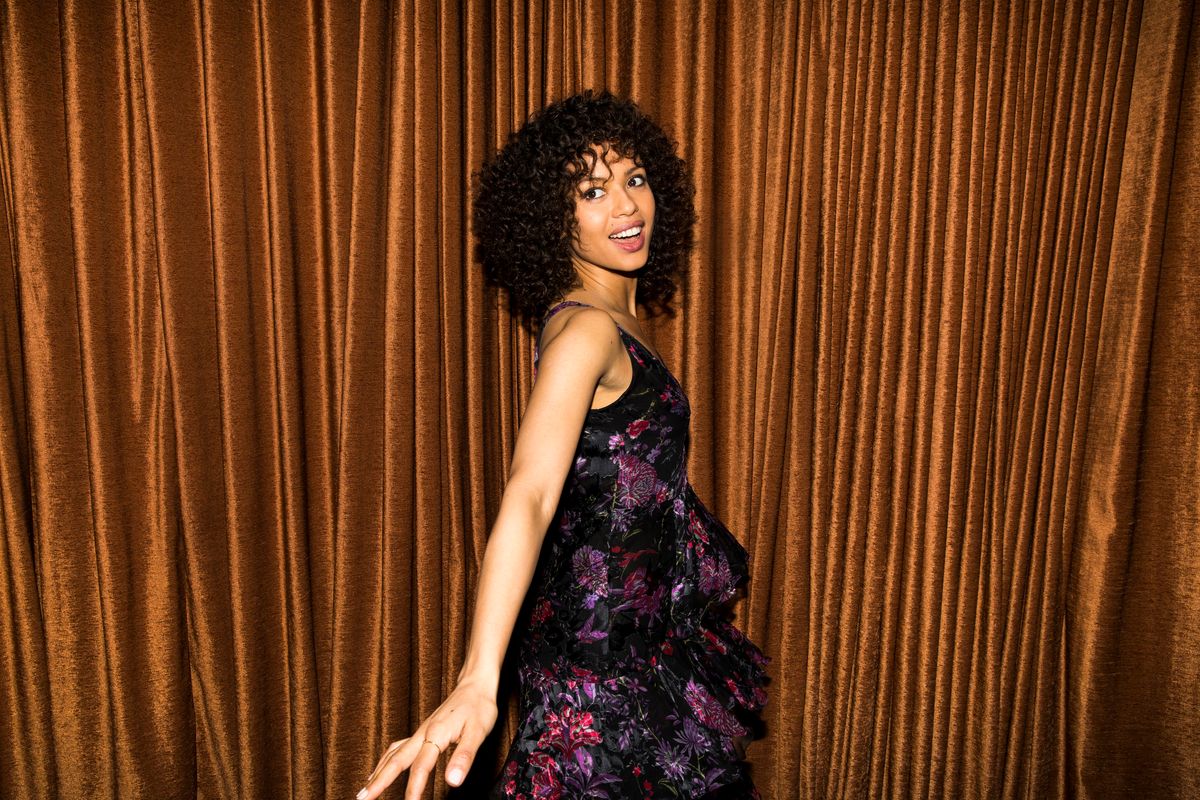 She plays a feather duster. But hear her out.

She’s played a suicidal superstar, an illegitimate mixed-race daughter in not-so-tolerant 18th-century England, and a time-hopping, bisexual party girl who also happens to be dying. But in low-budget, under-the-radar indie flick Disney’s Beauty and the Beast (we know, you’re probably like, what is this student film you speak of?), Gugu Mbatha-Raw plays flirtatious feather duster Plumette. And she’s really darned excited about it.

Gugu—pronounced exactly how you think it sounds—is one of those people who must have been a royal in a past life. (Are real people this beautiful? Do they enunciate their T’s just so? Do they have laughs so twinkly you can almost see the CGI sparkles? Do they get voice mails from Oprah praising their performances? Answers: yes, yes, yes, and true story.)

We caught up with Gugu during her Beauty and the Beast press tour to chat about playing an inanimate object, dancing to Pharrell on set, and being pulled out of a pile of feathers by Ewan McGregor (also known as Living Your Best Life).

Getting the role brought out her inner 8-year-old:

“I think my agent will testify I squealed down the phone with excitement. It was probably the biggest reaction I’ve had to any role I’ve ever won—I think it was that 8-year-old inside of me that was so, so thrilled. I’ve never done a Disney movie before this, so the idea of being a part of it with this incredible cast… I was very excited to be working alongside them.”

What it was like to step onto *that* set:

“It was just dreamy. Walking onto that set was an incredibly surreal moment. All the craftsmanship that went into this movie was just breathtaking. The candles, the flowers, the costumes, the hair and the makeup—it was just so sumptuous. To have us all swirling around that Disney ballroom in our white dresses to the title theme was a very romantic way to start. I will never forget that day.”

“By the end of the ballroom scene, we’d been dancing all day. When they finally called it a wrap, they whacked on some music and everyone just started dancing of their own accord. It was so funny seeing all of these people in period costumes rocking out to a Pharrell track (laughs). Hopefully that’ll be on the behind-the-scenes at some point.

“[And] being pulled out of a pile of feathers by Ewan McGregor at the end of the movie was quite a surreal moment. [Laughs] I did get to keep some of the feathers, which was fun.”

What it was like to play a CGI-made character:

“Because a lot of my character is a CGI creation, a lot of [the acting] was done in the recording studio, where we’d record our vocal work, and working with a dialect coach because Plumette has a French accent. It was really refreshing to do something a little lighter and more whimsical after playing a few dramatic roles, and very liberating to play an object—I don’t get offered roles like this very often.”

Hold up—it was liberating to play an object?

How music helped her get into her role:

“Every role is so different. For Beauty and the Beast, my vocal coach will testify that when we were in the recording studio, I would be flapping my arms around as if they were wings to try to get that levity in Plumette’s voice. I always listen to a lot of music. I’ll make playlists for each character—that helps me with the emotion of the scenes. Luckily with Beauty and the Beast, the playlist was already written! [Laughs]”