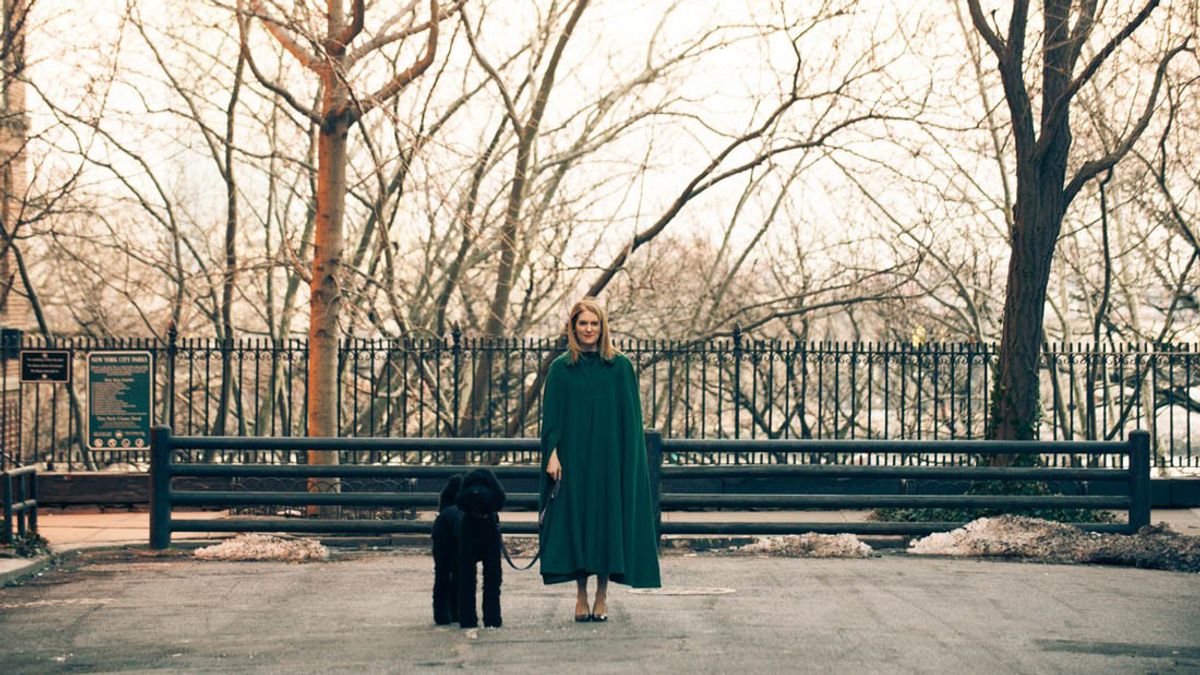 Jane Larkworthy found this out the hard way.

If you’re not already following the genius that is Jane Larkworthy on Instagram, we recommend you remedy that ASAP. Between her hilarious/compelling/inspiring 30-day style challenges (as in: #30DaysOfFelt; #30DaysOfHygge; and #30DaysOfVolume), her dog, Remy (who, btw, has her *own* account, and whose wardrobe is better than most of our human wardrobes), and her snippy, clever captions, there’s enough content there to fall deep in a virtual black hole. Oh, and did we mention she has a separate cooking account and blog? Because she does. Or that she was the beauty director at a little magazine called W for, well, for a very long time? Because she was. In other words, she’s a capital B Big Deal, and we’re so excited to announce she’s also going to be a regular contributor to Coveteur. Cue that emoji with the jazz hands. Come back every month for her take on...well...whatever she’s feeling. First up, when to call it quits on one of the most most significant relationships of your life—your fragrance.

I’ve had many fragrance loves over the years, but I’ve never experienced a breakup as painful as my most recent one with Santal 33.

Ours was love at first inhale. Like finally coming face-to-face with my perfect mate, I knew Santal 33 would turn up; it was only a matter of when. (I also happened to know because I had something to do with its creation. 33 is son of 26, the candle of the Santal family, already a close friend and one I gently encouraged to procreate.)

When Santal’s fostering human parents (Le Labo founders Fabrice Penot and Eddie Roschi) first placed a tiny sample-bottled 33 in my hand, it took to me right away. And as soon as I brought it out—wrapping tightly around my neck, burying itself in my hair—queries abounded. Almost immediately, it became known as “Jane’s fragrance.” At least in my hemisphere, anyway. Colleagues would walk into the ladies room and know that I was there, or had been recently (don’t be gross. I meant because of 33). Maybe I wore too much (a casualty of wearing one fragrance for a long time is that you lose the ability to smell it on yourself), but no one seemed to be complaining.

33 and I were inseparable for a good four years. People would inquire as to how and where we met. “Le Labo!” I’d freely gush. “It’s on Elizabeth Street. And I think they’re in Barneys now!” They’d walk away with admiring smiles that also revealed a hint of deviance.

And then it started cheating on me. I suppose I had only myself to blame. Me and my big mouth.

I remember when my friend Beth told me she had started wearing it. Beth is beautiful and stylish and wears Isabel Marant. I felt proud. I might not have her closet, but she had chosen to wear my scent.

Then she continued, “Denise is also wearing it, and she’s acting like she discovered it. I said, ‘Lady, Jane Larkworthy was the first.’ and Denise said, ‘Oh, I know. But we can’t tell anyone else.’ Like she’s the one who gets to decide that!”

By now she was laughing, but I wasn’t. I was the decider. I was Captain of the Santals. Our cult was getting too big, and I could no longer control it.

That’s the thing about fragrance. The good ones start out small. Then, if one succeeds, everyone flocks to it and starts wearing it, and it doesn’t feel special anymore.

This was a first for me, though. Of the 10-15 odd scents that make up my fragrance history, none has ever been a blockbuster. I’d always been proud to march to the beat of my own Eau. But then one day, Eau de Me had become Eau de Us. And when that happens, do you still want to wear it? Depends who the “Us” is, I suppose. Learning that a certain someone was wearing it sealed its fate for me. I won’t reveal who it was (that would be mean), but suffice it to say we are very different people. If the message my fragrance was sending out was translated for her, I was worried about my message being misconstrued. Does that make me a snob? I prefer to think it makes me an influencer.

Stop rolling your eyes and hear me out. The minute a new Céline bag flies from the runway to the shoulder of an Influencer (I hate that word, too, but it gets the point across), everyone wants it. By the time everyone gets it, Influencer has shelved it and moved on to the next hot bag. How is not wanting to smell like too many other women any different? Don’t think I haven’t noticed that you’re not wearing your Gucci fur slides around as much lately... The only difference between the sartorial switch-out and a scent one is that scent changing is cheaper. But it sure does hurt more.

It wasn’t always this way. Back in the eighties, every woman seemed to be wearing Calvin Klein Obsession or Giorgio Beverly Hills. A decade later, it was Camp CKOne or Camp Eau d’Hadrien by Annick Goutal, the latter a fashion editor darling. It was a proud badge of honor that one bragged about with only a hint of snobbery and territorialism, as if to imply that it might have been better to ask permission first before you just went ahead and started wearing it.

Then, somewhere along the line, women went from proud bottle-carrying members to tearing the labels off theirs. It was widely known that Sarah Jessica Parker was reluctant to share her scent. “It’s a mix of things,” explained the actress, vaguely. That coyness ultimately became a huge deal with Coty and the subsequent fragrance called Covet, which certainly was a good name for her feelings about her personal recipe. Did the two smell similar? I have no idea. I hadn’t met her before Covet.

Before Santal, no one ever coveted what I wore. I was a lone wearer and proud of it. When I worked at Mademoiselle magazine, the beachy-airy ozonic fragrance category had just been introduced into the scent zeitgeist. Issy Miyake’s L’eau d’Issy made the biggest splash (pardon the pun), but I found my ozonic voice in the slightly melony New West for Her from Aramis. Ozonics weren’t for everyone, though. My boss would walk into my office, catch a whiff, then rush back out muttering the words, “Oh, you’re wearing New West. I’ll talk to you later.”

Since all of my fragrance breakups have been amicable ones, I keep in touch with most of them; they remain on my dresser, and we occasionally go out for a spin when one of us is feeling nostalgic. But this latest parting came with anger and spite, confusion and resentment. How dare these women!

So after some soul sniffing, I went to Santal’s father, Fabrice, and burst into tears. (Not really, but it was pretty emotional.)

True. I did write an awful lot about this fragrance.

“Well, make a new one,” I pouted, sneaking a look into his eyes, whose smile let me know he was willing to hear more. “Make me something smokey.”

He thought about it for a second, then smiled. “Okay, we’ll work on it,” he promised. And then he went off to the Estee Lauder HQ, who had recently purchased his company.

“Smoke!” I yelled as he turned and gave me a thumbs-up before disappearing through the revolving doors.

Six months have passed and no news. When I last saw Fabrice, he shrugged his shoulders. “It’s harder than I thought it would be!” he admitted.

But I understood. With over 3,000 hashtags, Santal 33 will probably get a modeling contract any day now and maybe even a record deal and a reality show. I’ll always be able to say I knew it when, but it has bigger Influencers to vie for Instagrams with now.

As for me, I’m happy to report I’ve been wearing something new for nearly a year. Its name is A City on Fire, and we are very happy. People hug me and ask where City is from. Sometimes I divulge; other times I don’t.

Not until Coty comes calling.