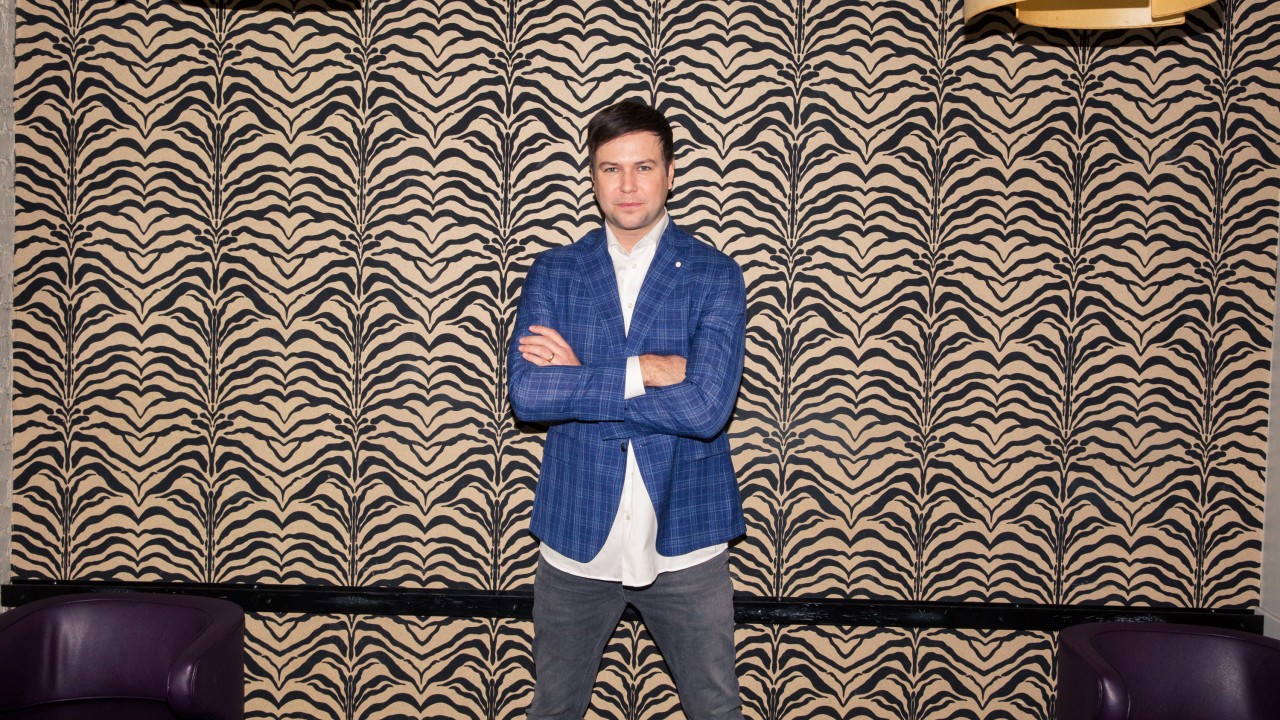 It was all part of Killam’s quest to show us the real Midtown Manhattan.

Let’s start with a joke, shall we? It only seems fitting. What do you get when you add tequila, a speakeasy, a long line of fans, and an extremely funny IRL comedian at ten in the morning? Well, I’m not that witty, so I’ll just cut to the chase—you get Taran Killam’s Coveteur shoot, which took place the day after a blizzard hit New York City (so, like, maybe the coldest day of the year), and all started with us eating pomegranate-seed-topped guac (fancy!) and drinking margaritas for breakfast (because why settle for something normal, like coffee and croissants?), then running outside (sans appropriate blizzard fashions) to say hello to a slew of dedicated Hamilton fans camping outside for tickets. Yup, just a normal day in the life.

But just let us fast-forward a bit, because the reason we were even running around Midtown with Killam—whom we’ve come to love from his time at SNL, and, most recently, for his Broadway debut as King George III in Hamilton—was because we’d tasked him with showing us his version of New York, and because we wanted someone to prove to us firsthand that Midtown doesn’t suck after all (which, for the record, he did). Read on to hear about the first time he ever got properly drunk (it was on mudslides, ftw), the hidden bar he frequents with Neil Patrick Harris, and just how awesome it really is getting to perform in Lin Manuel Miranda’s history-making musical each day. 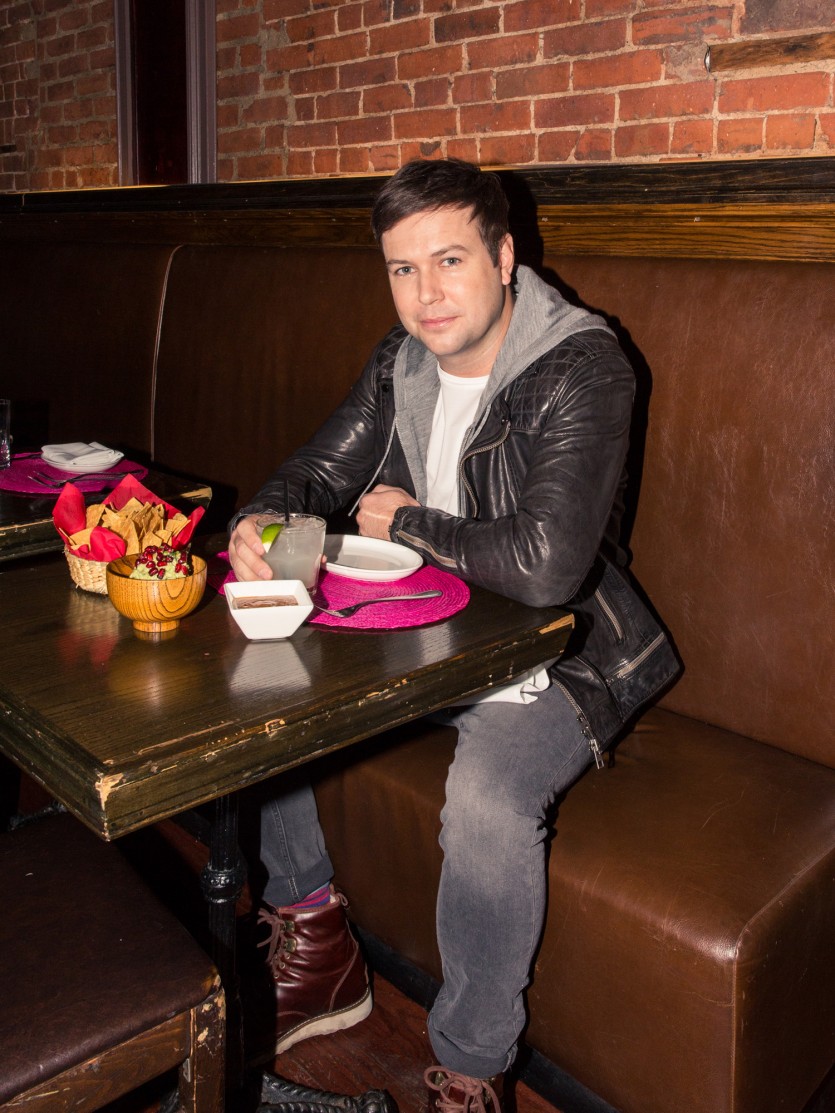 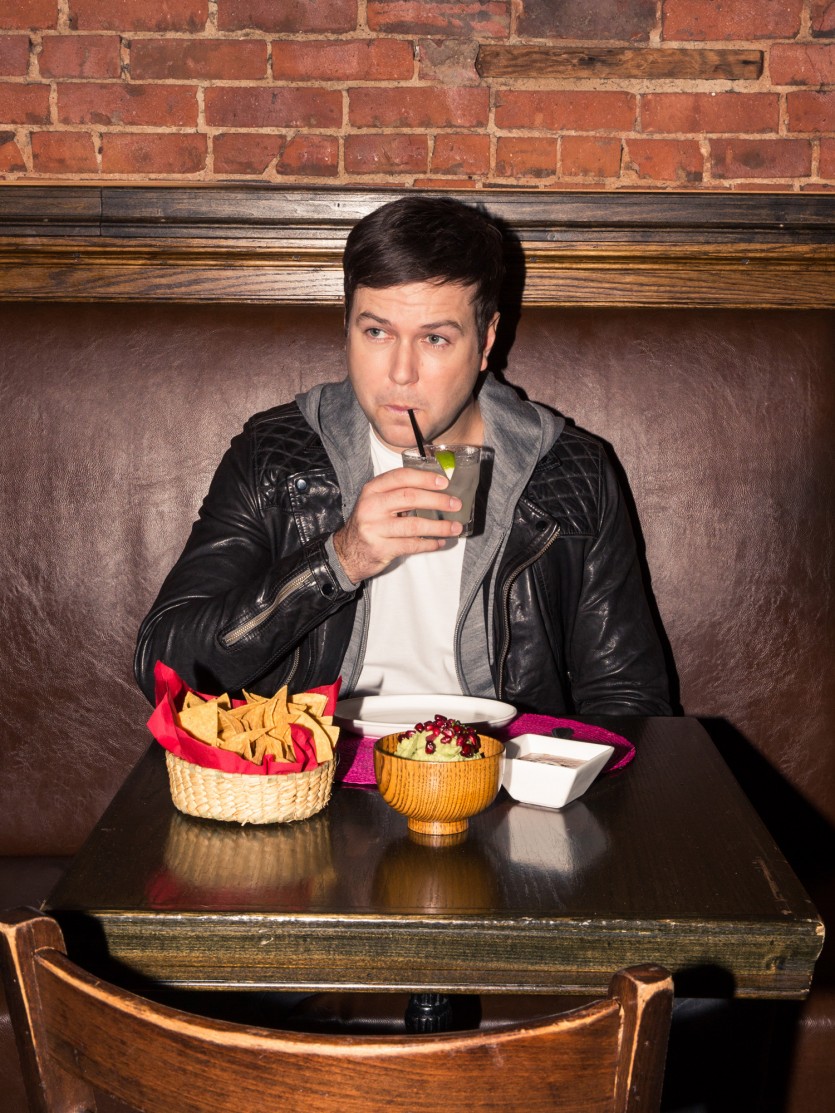 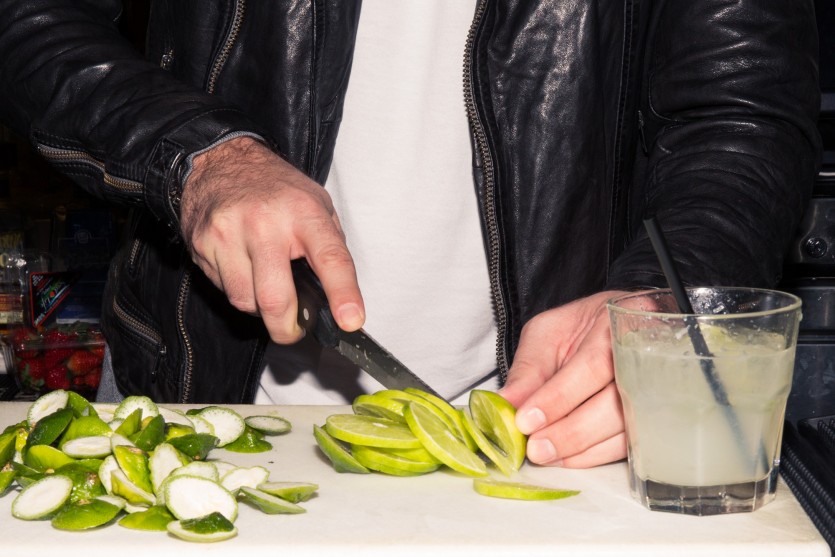 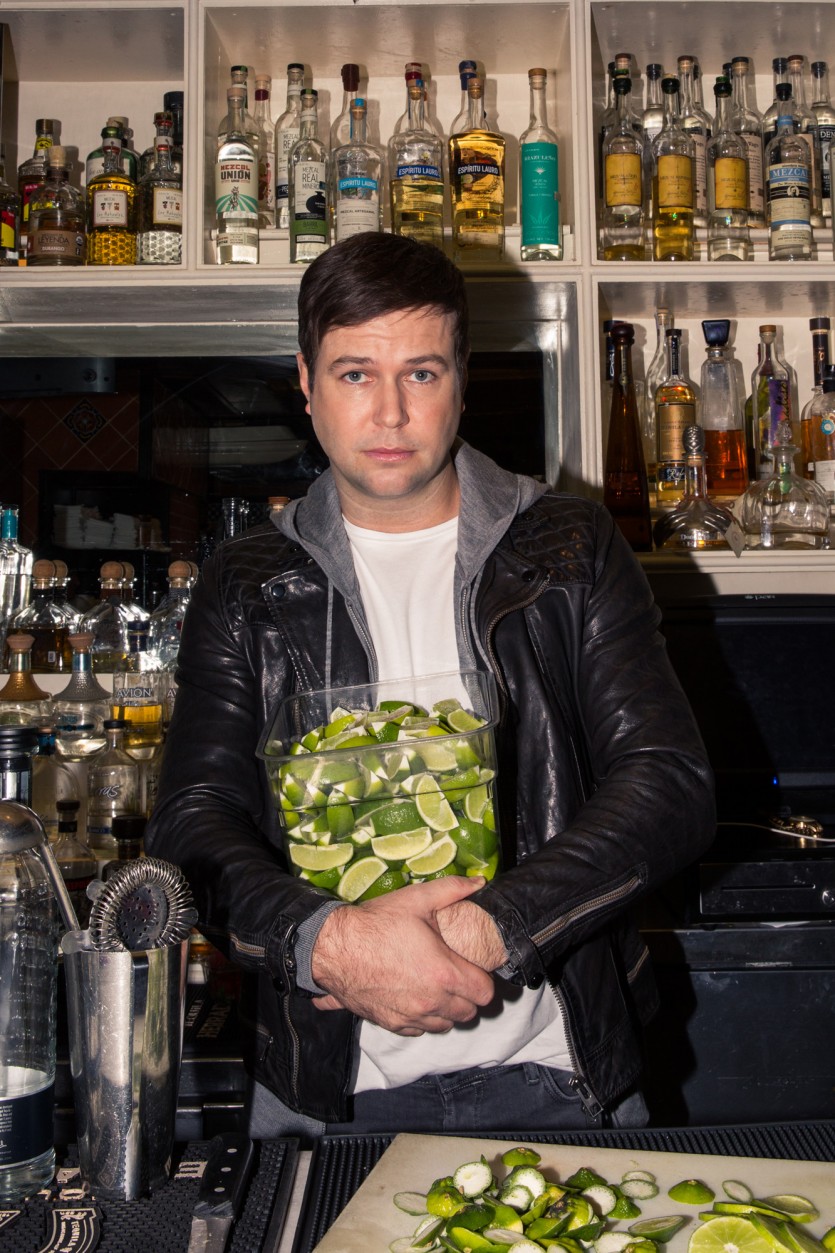 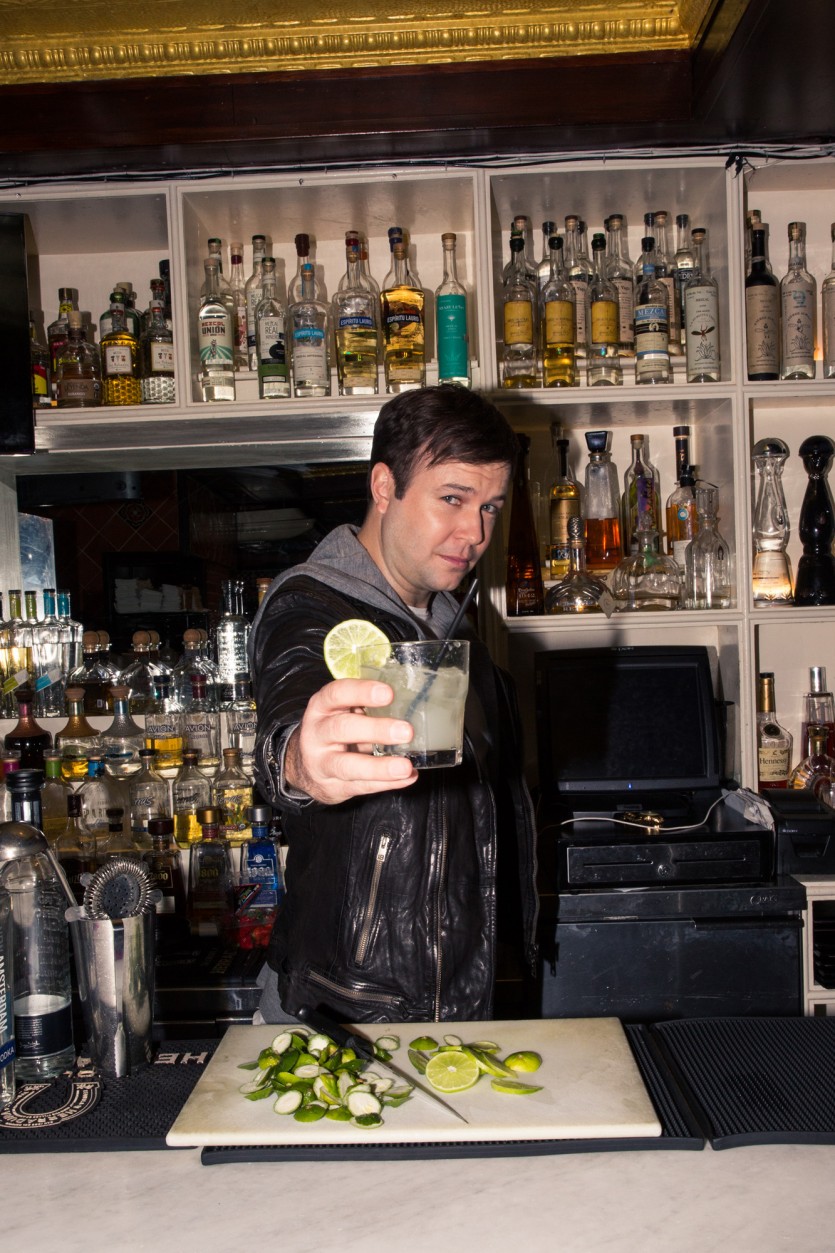 “Being a Southern California native, good Mexican food is very important to me. My first week of rehearsals, I wanted step up my game beyond Chipotle, so I did a good old-fashioned Yelp, and Toloache came up. It’s also across the street from my favorite sushi place, Natsumi, so that somehow felt like a sign. I walked in and saw that awesome brick oven right inside of the restaurant, and the food was amazing, so it became my go-to.

“I get the carnitas, which were pretty fantastic, and they also have Mexican flatbreads that they bake in the oven, which are phenomenal. Their traditional margaritas are pretty strong in tradition, if you will. A margarita, a good table-side guac, and that’s all a growing boy needs.

“Other than that in Midtown, it’s not a boutique neighborhood. It’s very neon, it’s full of light bulbs. Apparently it never sleeps. Have you heard of the M&M store, though? [laughs]. Like, do you know the Disney Store? They’ve got great deals on like model action figures and stuff. There’s a really great coffee shop on 51st called Bibble and Sip that’s become my go-to.”

“Cutting the limes was special for you guys—I was trying to show off.”

2. The Speakeasy That Shall Not Be Named (you’ll just have to find it yourselves) 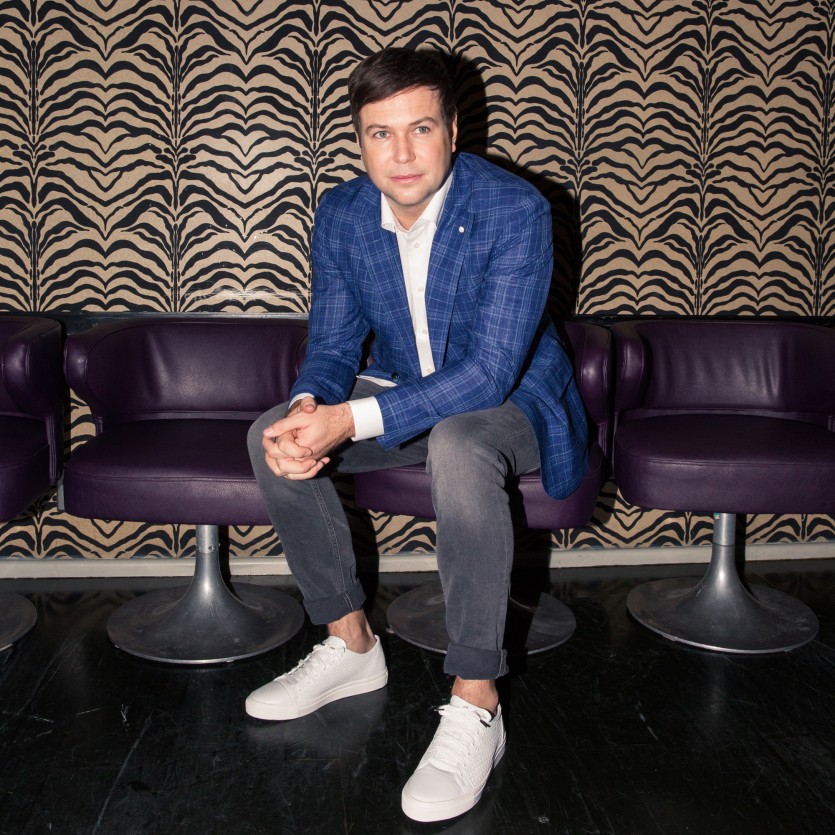 “Midtown is sort of my hood from having been on SNL, so I know it pretty well. If you’re in the rough and tumble, you go to Bourbon Street, and if you’re in a classy theater mood, you go to this speakeasy. I’ve always known about it—it’s sort of the hip, hidden post-Broadway show spot. I went there for the first time with Neil Patrick Harris after we saw him in Hedwig, and it was a cool reveal. I was like, ‘Oh, we’re going for drinks at a friend’s house.’ The entrance is very nondescript, but it’s great, and everybody is so nice there. It’s definitely my favorite meet-up-with-a-friend-for-a-drink spot.

“I’m a bourbon man, but I didn’t even start drinking until much later in life. I got really sick one week at SNL and was so stuffed up that I couldn’t sleep. I was literally, like, choking on snot if I tried to sleep, and NyQuil wasn’t working, and I did the Vick’s vapor rub and had the humidifier on high and nothing was helping. Somebody suggested that a glass of bourbon—especially not being a drinker—would really knock me out. It was truly the greatest night of sleep in my life. That warmed me to it.” 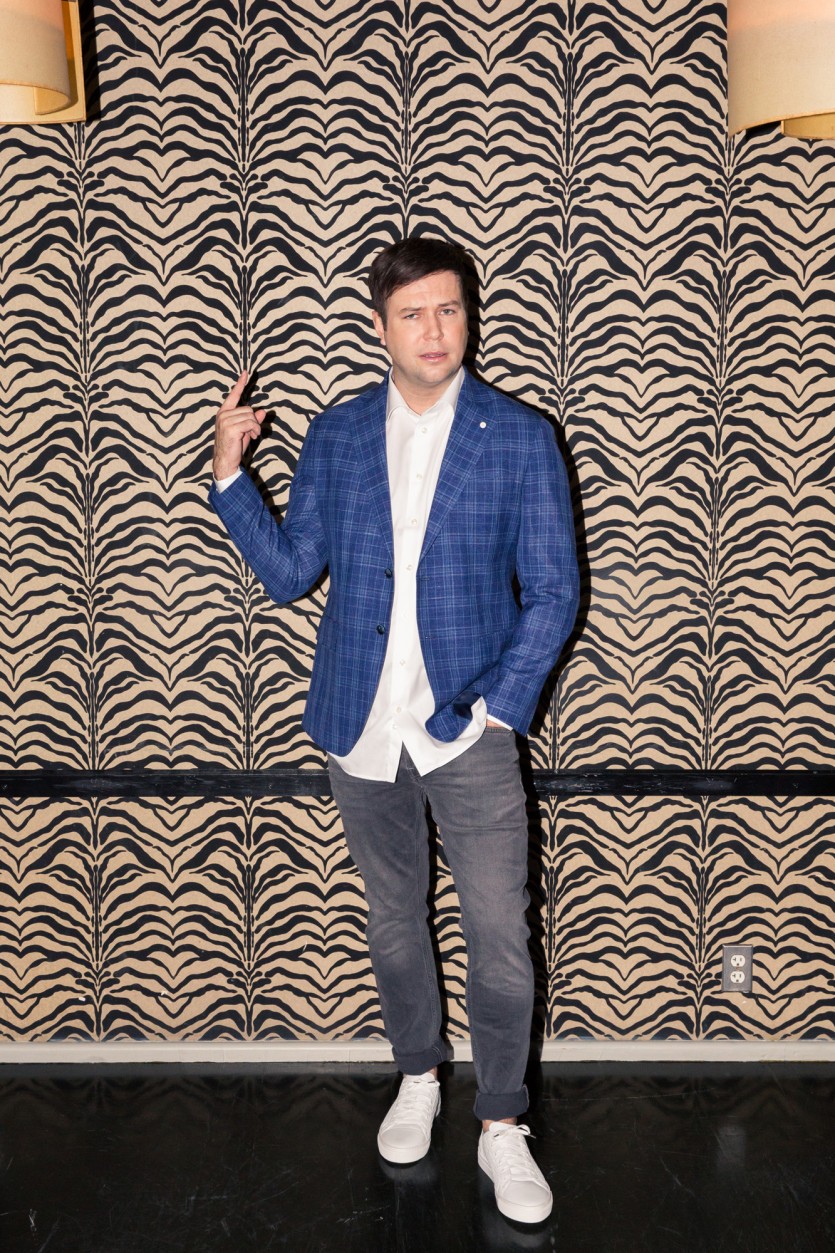 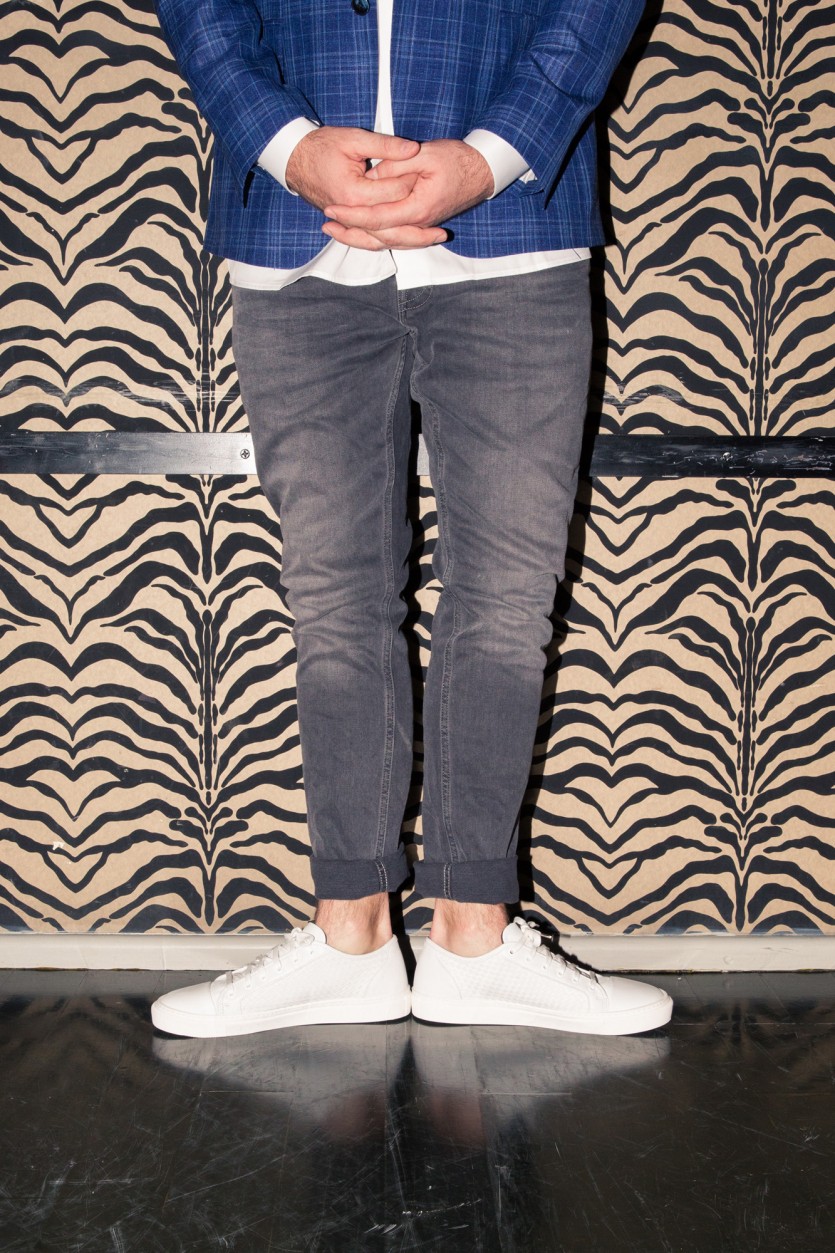 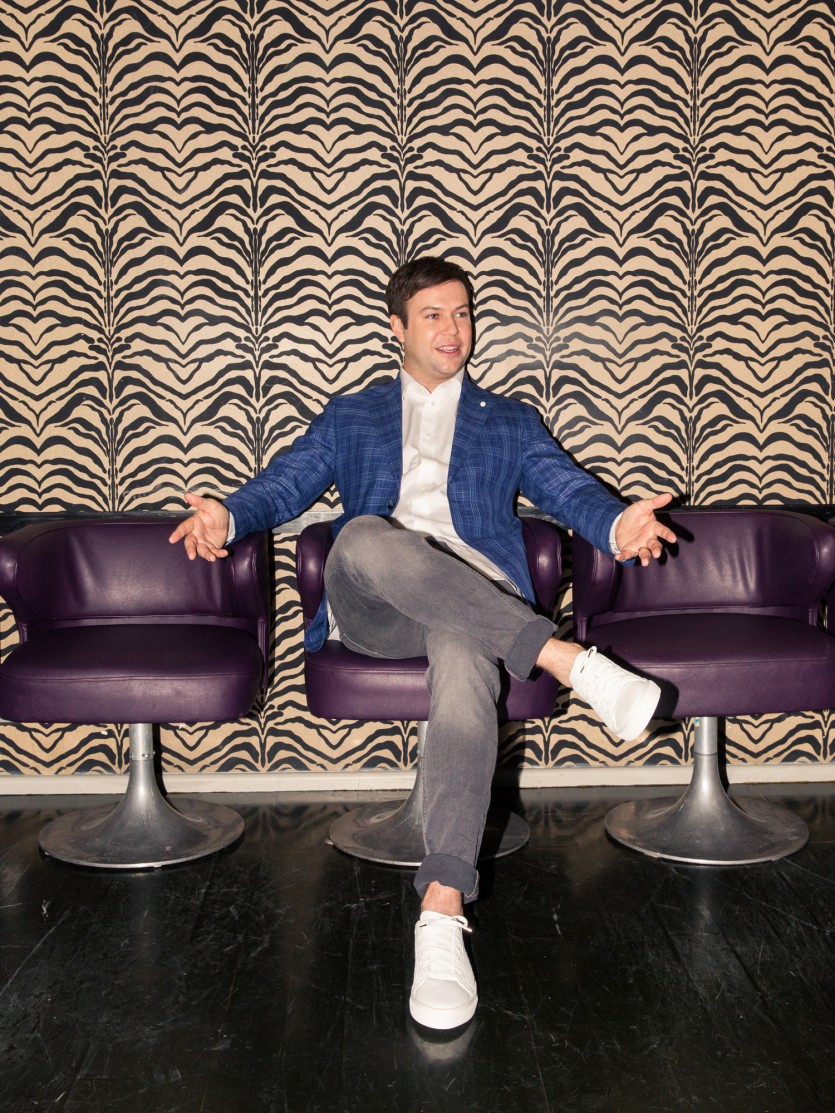 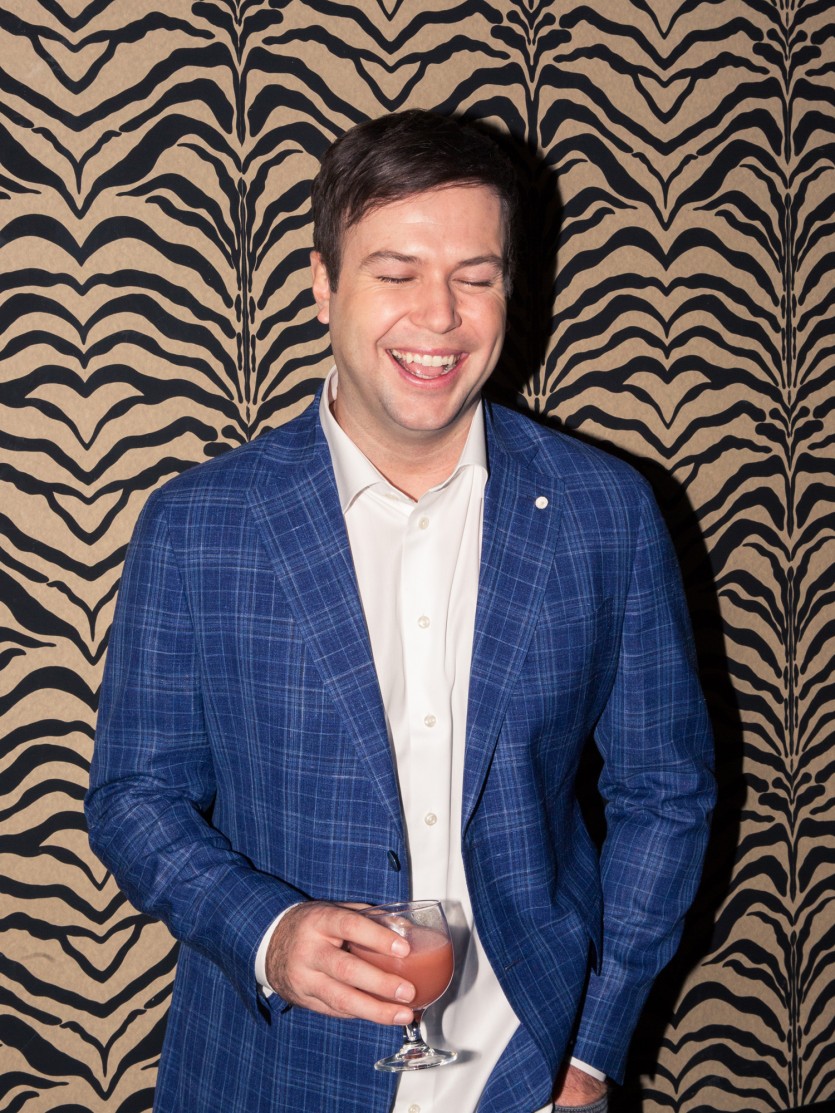 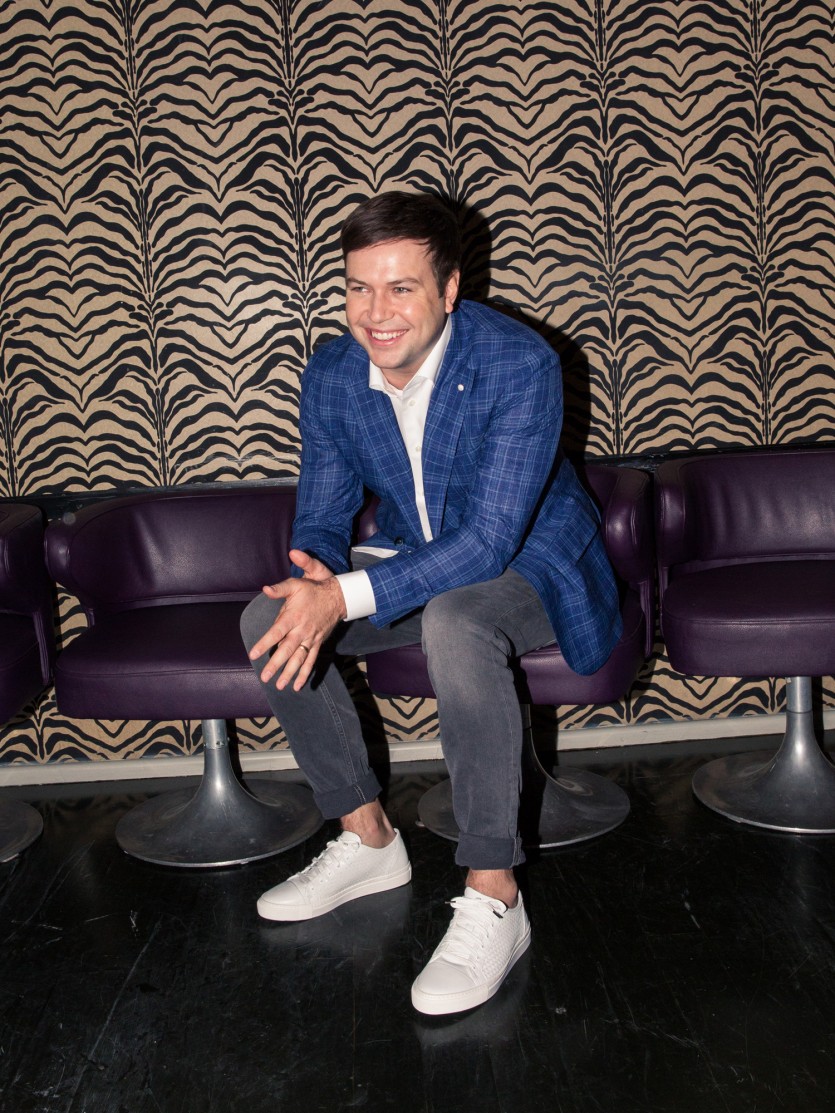 “But I didn’t really actively imbibe until my honeymoon. My wife and I went to this resort in the Caribbean on Petit St. Vincent, and I’m doing two or three Jack and Cokes a night and nothing is happening, nothing is affecting me, and then the third night we’re there, [my wife] Cobie asked the bartender for his favorite drink. He made her a mudslide, which is literally just an alcoholic milkshake. I was already a couple Jack and Cokes deep, and then she didn’t like it—it was too sweet for her, because she is, umm...sophisticated, and I chugged her whole mudslide and had three more. And that was the beginning of the end. So yeah, I drank four that night (then I did a lot of low-rep, high-weight workouts. It was basically enough calories for the full week).

“That’s when I started feeling the effects of drinking for the first time. We were sitting at dinner, and talking for a long time and getting really emotional over little things, just like, ‘Cobie, we’ve known each other for so long, and look how lucky we are, and where we get to spend our honeymoon and we’re in love and we have children!’ I’ve since refined my tastes, and now my go-tos are a good Kentucky Bourbon, so a Blanton’s or Woodford or Dickel’s Sour Mash. I’m growed-up.” 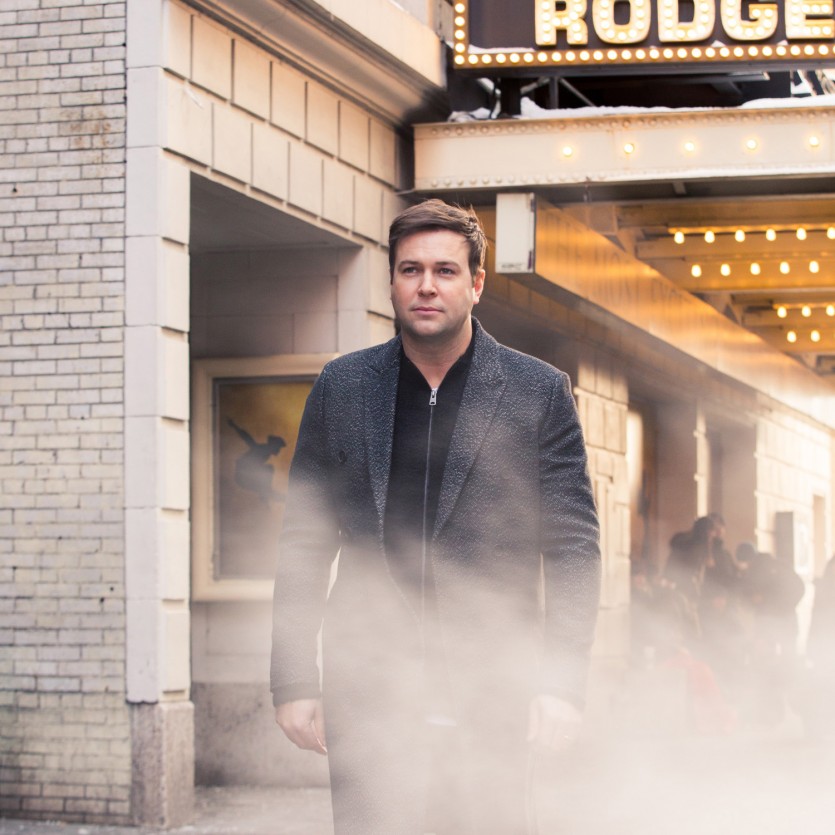 “I’ve got another week under my belt of Hamilton performances. It’s been good—a couple of bumps and bruises here, but I definitely feel more confident [than when I started]. I do eight shows a week. It’s a lot [laughs]. I’m about 35 performances deep—I’ve never done anything that many times. It’s definitely the most significant difference from any other type of performance I’ve done. The closest thing I can equate it to is the year and change I spent at the Groundlings theater doing live shows every week, but that was one show a week and each show was different.

“Generously, the creative team [of Hamilton] was like, ‘We want to give you at least a couple of weeks to get comfortable and stretch.’ It took me a full four weeks, it wasn’t until the end of the fourth week that I started to feel the muscle memory being set in. But that being said, the other day during a matinee, I fully got too comfortable and said the wrong line. It’s exciting to get confident with it, but it’s important to not get too comfortable as well.” 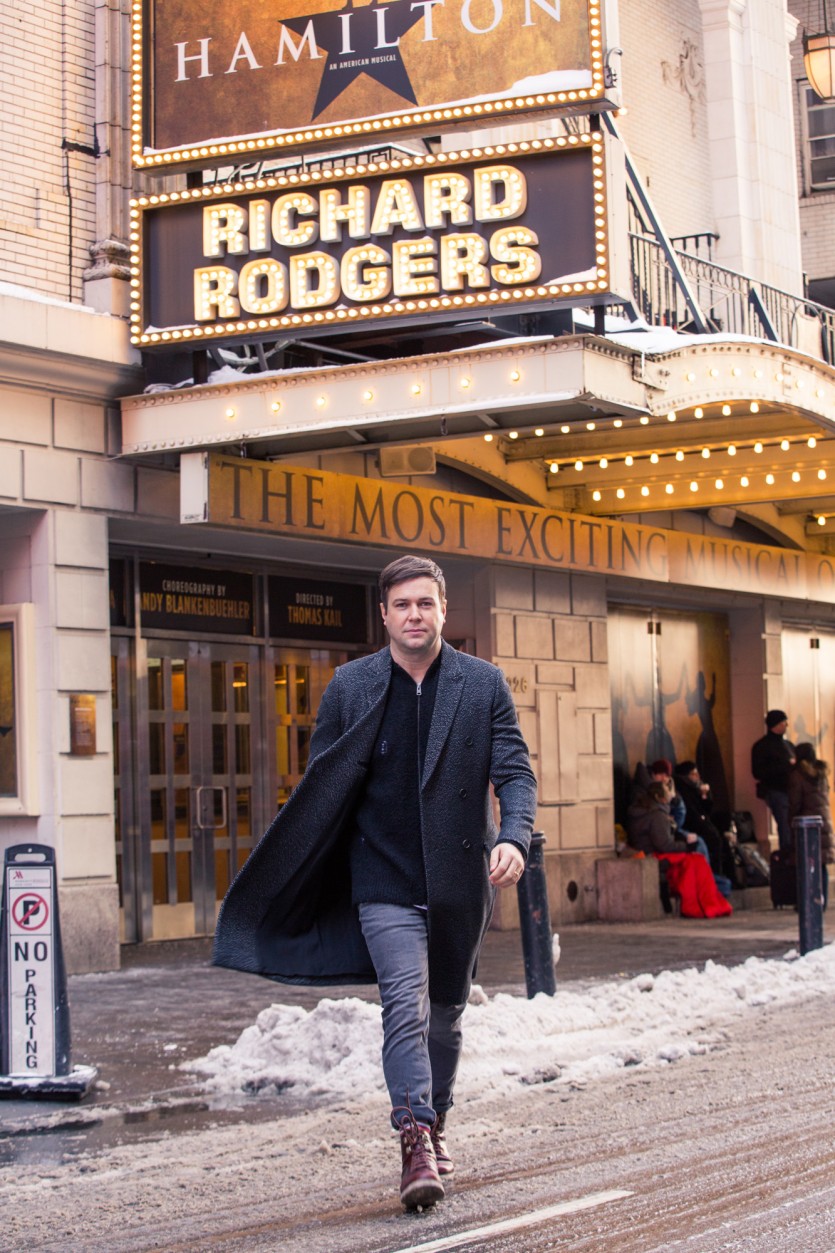 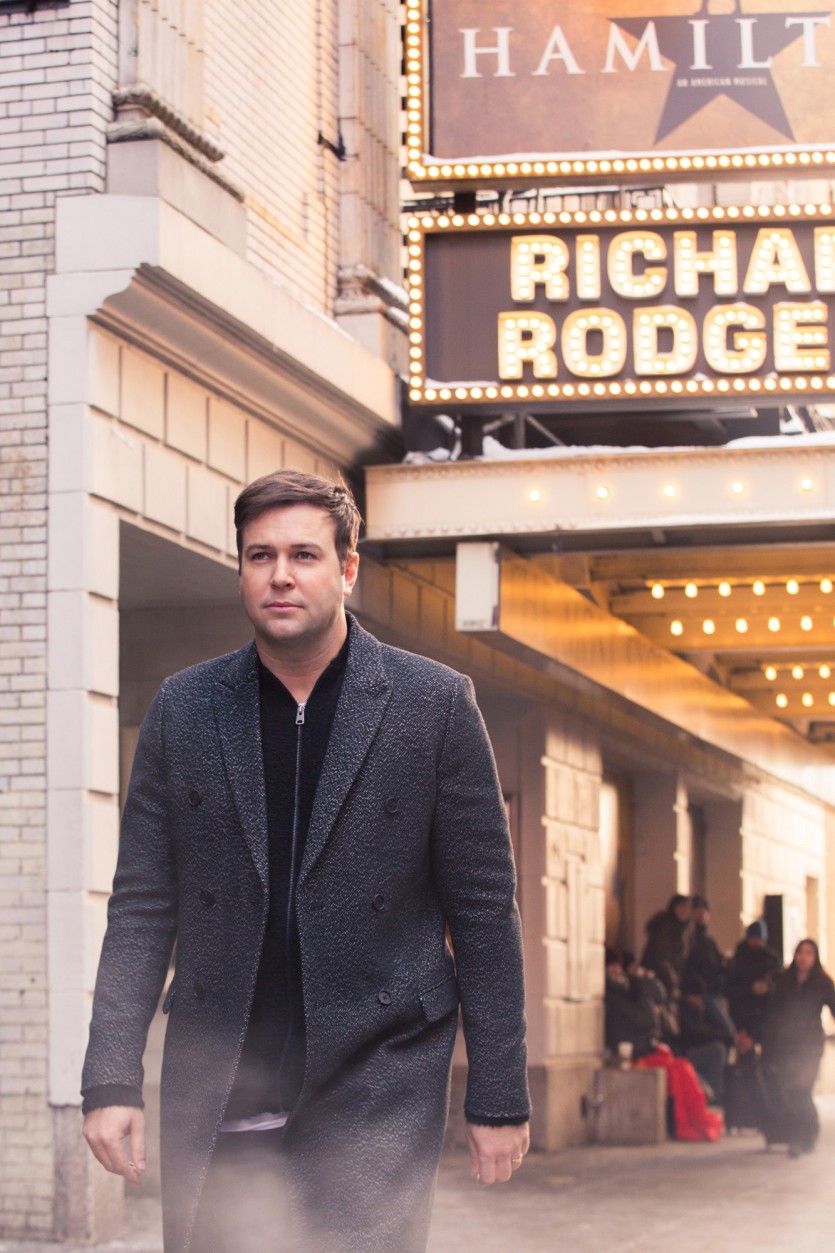 “I’ve been taking lessons with a vocal coach, Liz Caplan, who’s amazing and very good at what she does. So before every show I do a vocal warm-up routine that she gave me, which is a lifesaver. My character is not onstage until about twenty-five minutes into the show, so I don’t have to start getting dressed or ready until about five minutes before the show starts, and then I head downstairs and put my wig on.

“It’s overwhelming how affected people are with the show and how much it means to them. People are traveling from all over the world—I met people from New Zealand, from Amsterdam, people brought me a whole package of stroopwafels from Holland (they’re like a maple waffle-y cookie), not knowing that my father-in-law is Dutch, so those were a big hit at our house. It really has changed people’s lives, so that’s been incredibly moving and a constant reminder of what an honor and privilege it is to be a part of the show.”