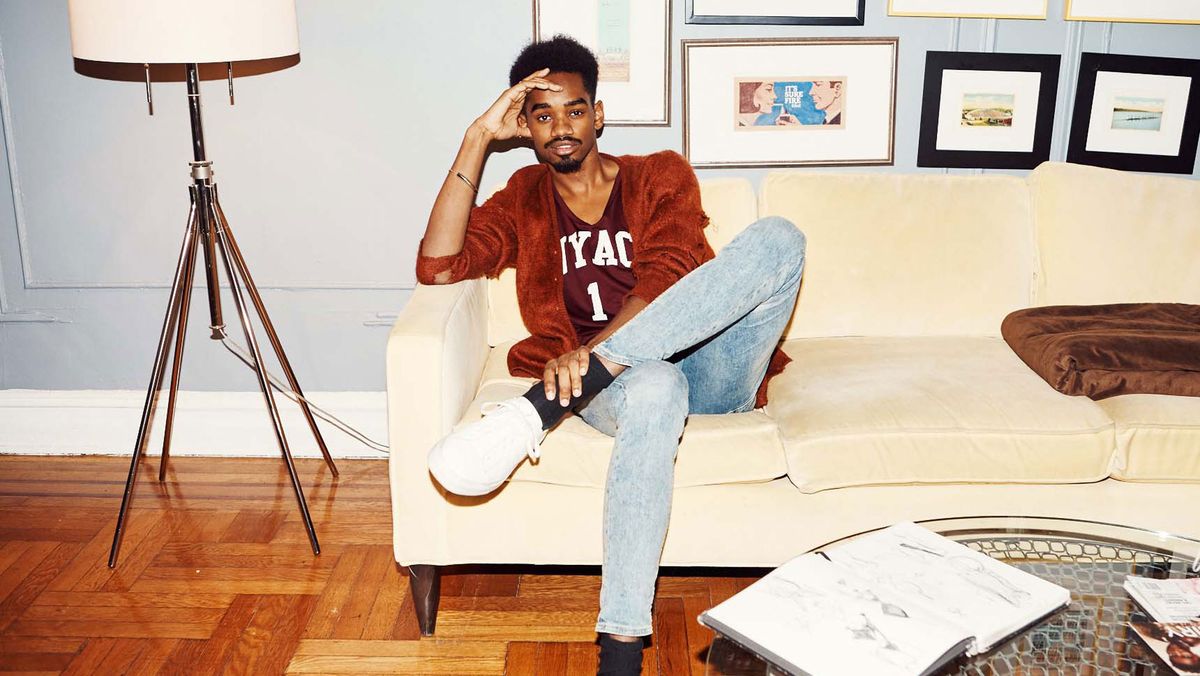 AND is challenging fashion’s perception of beauty with his line KHIRY, inspired by the African diaspora.

Sometimes Jameel Mohammed finds himself waking up in the morning thinking, ‘What!?’ Oftentimes in conversations with friends he finds himself exclaiming, ‘It’s actually coming together!’ Every time people are shocked that he’s shocked about the success of his jewelry line, KHIRY.

Maybe because when you’re a 22-year-old senior majoring in political science at the University of Pennsylvania who managed to design a luxury jewelry brand out of your dorm room AND raise $20,000 on Kickstarter in 48 hours, success isn’t so much a surprise as it is a given—it’s something most people would expect. But then again, Jameel is different.

His jewelry isn’t just pretty. It’s political. Jameel turned his frustration with race relations in America into something beautiful, and with swooping silhouettes and semiprecious stones he’s redefining luxury and high fashion’s perception of what is beautiful. Instead of waiting to be invited into the luxury conversation where western ideals of beauty rule, Jameel, inspired by the African diaspora, the empowering words of Angela Davis, and the Afrobeat sounds of Fela Kuti, made a space for himself. KHIRY is an unabashed celebration of the beauty and breadth of black culture.

Taking a semester off from college to focus on the brand before heading back to graduate, Jameel spoke with us on how political science and fashion go hand in hand, the tribe that inspired his design, and why what is happening in the world informs his design more than anything else.

Why you should always ask questions (especially if Barneys is involved):

“I actually did a collection of clothes for my senior project in high school. I could do any project and have it count towards my graduation requirement. Then I got to Penn freshman year and did a collection of clothes for Penn Fashion Week where someone from Barneys came to speak. I asked during the Q&A, ‘What would it take for a designer to get into Barneys?’ They said, ‘I don’t know! Show us what you have.’ I’d done a couple of necklaces as accessories for my senior project for high school. They really liked those and they gave me an internship there that summer.”

Where politics and design meet:

“[Studying political science] just happened to be at a moment where I was coming to a new political awareness within myself, especially around the killings of Eric Garner and Mike Brown, the protest that surrounded those and the lack of indictments in those cases. It made it impossible for me to ignore politics at that point. Going to KHIRY specifically, at this time, I am having this political awakening but I am still sketching and I still am producing art in the way that I’ve been since I was a teenager. It wasn’t a platform yet, but the potential was there, and to ignore the political reality that I felt within myself would be disingenuous. Not to hone in on it would feel like a mistake.

“For me especially, fashion, beauty, and luxury have politics in them already. Everything is an expression of what we think is beautiful, which has incredible political significance in how we treat people. It is often attached to ‘What is permitted? How can we engage with these people? Can we engage with them in a critical way? Can we make fun of them? Oh well, they are not beautiful, so yeah. They don’t posses the humanity to be considered beautiful and thus they don’t possess the humanity to be considered worthy or intelligent or all of these things.’ I was also seeing these images that were being let across the evening news: black people as rioters, black people as protestors, black people being shot by the police, those were the only images that we were seeing, these cataclysmic, apocalyptic images of black people. I wanted to create something that was the opposite of that and create a space in culture for the celebration of black heritage and the unapologetic celebration of that heritage and that culture and that vibrancy.”

How the Dinka people inspired his signature silhouette:

“The shape that starts thicker and narrows is originally inspired by cattle horns. Big-horned cattle are herded by this specific tribe in the Sudan called the Dinka. They are a nomadic community and the cattle was very important because it represents the wealth of the community and it is really revered. What I am trying to encapsulate by examining these cultural references is a spirit and an essence of resilience and of strength, but also of beauty and of opulence, which I think is a word that no one really associates with black culture, but it’s true! There is such a dignity within black people even in the face of adversity and that is what I want to speak to.”

Why the current state of politics will impact his next collection:

“Design is taking the essence of something, pairing it down to what makes it that thing and polishing it into something beautiful. That is what I’m thinking about, a process where references are layered in a way that maybe reveals something. I’ve been reading about another nomadic tribe in northern Africa, the Tuareg people, and they have interesting gender roles. They are an Islamic people. Islam came in the past through them at a certain point in history wherein men were still wearing veils and women weren’t. Women are allowed to take multiple sexual partners before marriage. These aren’t things that you often hear of reported in our conception of what is ‘Islamic culture.’ The collection that I am working on now, it reflects this historic culture and the difference in that and the way it is often portrayed. Now Trump has been elected and we are in the midst of what looks to be an anti-Islamic sentiment in our country. As an artist I feel moved to respond to that.”