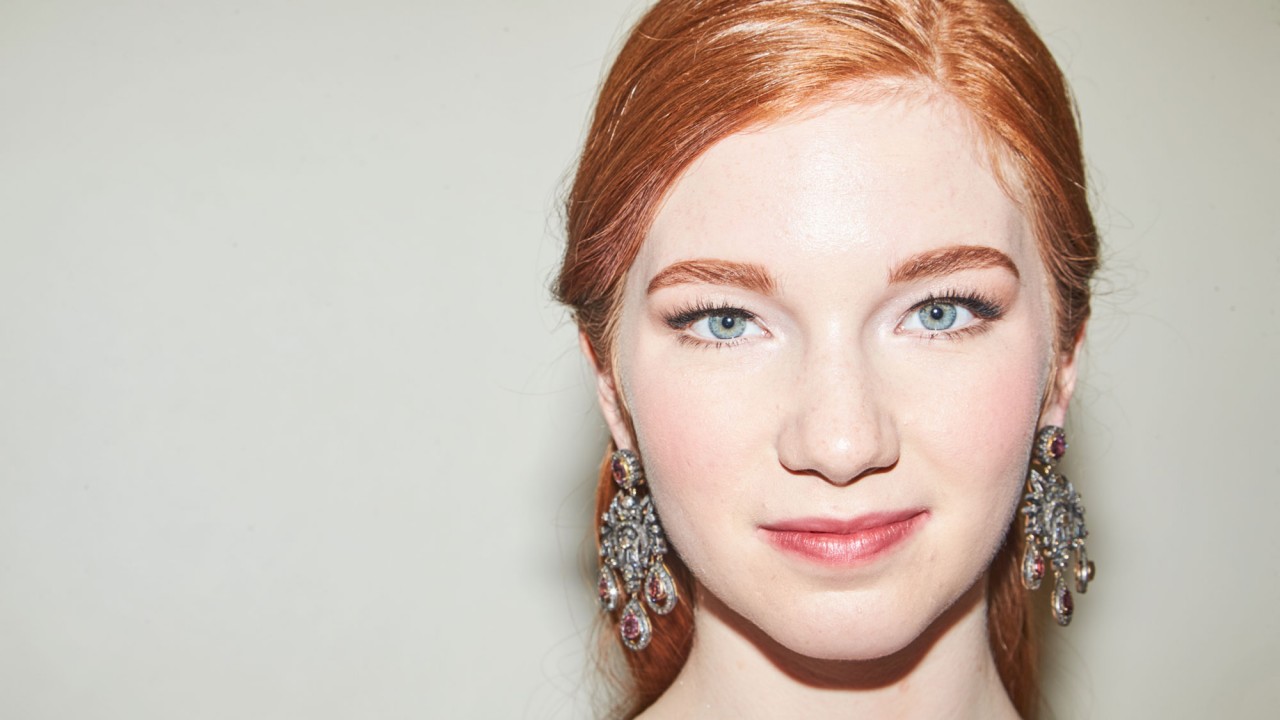 We got ready with the actress before her first-ever SAG Awards.

Pro red carpet tip courtesy of actress Annalise Basso: for your first-ever Screen Actors Guild Awards, make sure to don a one-of-a-kind ruby red Bibhu Mohapatra gown, complete with an almost-sheer chiffon train. When the time comes, expertly toss said train in the air to make for what will be one of the best and most dramatic red carpet photos of the night.

We watched all of this go down just hours after tagging along as the actress prepped for the awards. Of the epic dress, stylist Warren Alfie Baker explained, “I really wanted to create some drama with this look while showing some Hollywood glamour with a whimsical vibe to play on the film.” Before she dressed and sat down for hair and makeup (artist Roxy Saffaie created a fresh, opalescent look, while Ryan Taniguchi pulled back her scarlet hair to complete the ethereal look), we had the chance to chat with Basso, who plays Vespyr in the drama Captain Fantastic. Her excitement over the film’s success thus far, and the SAG nomination for Outstanding Performance by a Cast in a Motion Picture category, was contagious.

We couldn’t help but catching a little bit of the butterflies she admittedly felt as she tried to stay relaxed, snacking on pomegranate seeds and listening to music. But when we saw her expert arrival and dramatic display on the carpet, we’re guessing all those butterflies flew away.

“I’m so excited for the SAGs. It’s kind of been a whirlwind: yesterday night I went to Chateau Marmont for the EW party, and it was so overwhelming seeing people you’re used to seeing in TV or movies there just being normal people. I saw Larry David walking around and I felt like, ‘What am I doing here?!’”

“I'm not really nervous, I have Roxy [Saffaie] and Ryan [Taniguchi] with me and they’re both super sweet and calming and we have music playing, just trying to stay calm.”

“This is my first SAG Awards. Just having the cast in the film be nominated in the first place was super exciting. And I’m most excited for that because the attention the film is getting is making me really happy. [We didn’t know] when we were filming it—because the film takes risks—so it’s exciting to see how those risks were received by the public. At Cannes Film Festival our director, Matt Ross, won an award and that was so great. I’m just so excited about the fact the film got nominated!”

“It’s about surrounding myself with people who are also calm. My makeup artist and hair stylist are so sweet. It's about being able to talk with people about normal things and not what’s happening with the craziness that is the SAG Awards. I'm avoiding that topic until we get there and when I’m with the rest of the cast and everything, it all kind of mellows out because we’re all together and there’s nothing to worry about.”

“This hair-and-makeup team is killing it right now—we’re doing a shimmery opalescent eye shadow with a plum stained lip, and highlighter, glowy cheeks and fresh skin. For hair, we’re pulling it back in the front and down in the back. It’s super soft.”

“I’m wearing a ruby red Bibhu Mohapatra old-Hollywood-style dress. 'Ethereal and regal' is how my makeup artist described it!”

“I don’t usually wear lip color, but my chapstick is the OG Burt’s Bees peppermint. I also like Osmia Organics, it’s a skincare line, but they have a formula called Lip Doctor, which is amazing.”

“I really wanted to create some drama with this look while showing some Hollywood glamour with a whimsical vibe to play on the film.” — Warren Alfie Baker, Stylist

“In my clutch tonight I’ll be bringing lip gloss, chapstick... I don’t know if I should go super personal with this, but, tampons—have to bring that extra protection. And my ID and debit card. That’s about it.”

"The black velvet clutch with silver and gold accents from Hayward just added a rich elegant feel. The H.Stern rings were perfect—the black diamonds were subtle but had shine." — Warren Alfie Baker, Stylist

"When it came to accessories I wanted a dark vintage feel and statement earring to keep the neckline clean. I found these gorgeous earrings from Amrapali that were perfect. They have beautiful ruby stones to compliment the dress with a fleck of diamond." —Warren Alfie Baker, Stylist

"I wanted to avoid shortening the dress as much as possible so went with a dyeable platform shoe from Charlotte Olympia. The shoe was died to match the dress and was done in 36 hours— award season magic." — Warren Alfie Baker, Stylist

“I love pomegranate seeds for snacking, because of the whole dress, trying-not-to-bloat thing. I’m also not usually very hungry before these things because of all the butterflies in my stomach. I usually just snack on pomegranate seeds, drink water and tea sometimes.”

“The whole taking-pictures thing and walking around the carpet while people shout your name is all kind of surreal. I just try and smile and laugh! I just try to not take myself too seriously and to breathe. So you don’t have the constipated star smile on the carpet. Breathe, stay confident, and, it’s super cliché, but, be yourself. Don’t try to be super sexy, just let your body channel the energy you’re feeling. And that sounds super L.A. but it’s so true!”

“[When the awards are over tonight I’m most looking forward to] taking my heels off because they’re so high! All of the shoes I’ve worn for awards shows and going out for publicity events, the heels are so high. Luckily I’ve built up a high pain tolerance in my feet because I do ballet.”