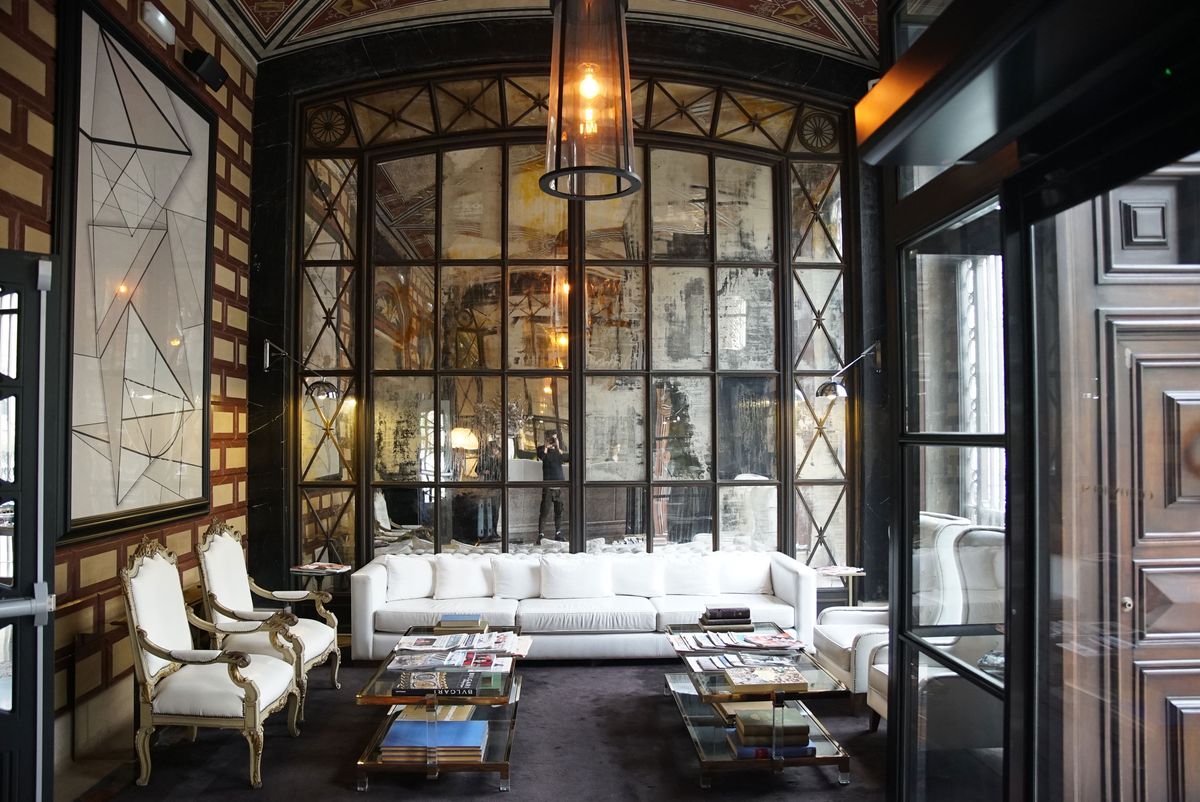 5 Spanish Hotels That Will Make You Book Your Trip Now

I love me a good hotel… A place where eating breakfast in bed is encouraged, rather than a recipe for spending the rest of the week scrubbing hollandaise out of your duvet. Where people call you Ms. Last-name regardless of the fact that you’ve been in transit for 20 hours and look more like an extra from Les Mis. Where an acceptable way to spend your day is strolling about your 200-square-foot palace sipping thimbles of Nespresso, the terry-cloth train of your one-size-fits-all bathrobe dragging behind you.

Suffice it to say, I don’t call myself an expert in a lot of things. But when it comes to finding cool hotels, I know my shit.

So when my boyfriend and I booked a two-week road trip through Spain and Portugal last month, I abandoned all the practicalities (you know, finding a car, looking at a map, etc.) in favor of finding beautiful places to stay, regardless of how off the beaten track (read: paved roads) they were. What we quickly learned was that the aesthetic standard for lodging in Spain is crazy high (just having a pendant lamp next to the bed and Aesop in the shower does not a design hotel make—but we’d expect nothing less from the country that gave us Blahnik and Balenciaga).

Here’s where to sleep in Spain.

We’ve just landed in Barcelona and set off on an ambitious four-hour drive south to our first hotel, running on diesel fumes and next to no sleep. Our tiny tin can of a stick-shift lurches down the side of a rocky valley in Benimantell, Spain, a rural village outside of Valencia (population: 378). The roads have been designed by what I can only imagine was a third-grader practicing his cursive, and the “guardrails” are sporadically placed concrete blocks. Motorcyclists with death wishes zip by us. My boyfriend is laughing. I’m 73 percent sure this is the end.

After stopping for directions from a couple of kind Spaniards unperturbed by the Nike-laden Canadians wildly waving Google Maps printouts, we spot a matte-black sign guiding us deeper down into the Guadalest valley. “VIVOOD Landscape Hotel,” it says. Landscape is right.

Vivood feels like a secret. A chorus of birds and crickets greet us as we walk through the path that zig-zags through the forested grounds (we think it’s one of those spa soundtracks, but no). “Silencio,” reads the placard that greets us at the entrance. No need to tell us twice—as soon as we opened the doors to the “lobby” (a glass-walled cabin suspended on stilts), the views silencio-ed us right up. The sun was starting to retreat beyond the undulating mountaintops, and a pinkish-orange glow was setting over the valley. We’re in hotel heaven.

From the inky infinity pool overlooking the valley, to the five-course tasting menu dinner, to the suites—each in their own cubic cabin sticking out of the rock face, all fronted in floor-to-ceiling glass (including the shower!)—Vivood was nothing short of spectacular. As we wandered back to our cabin from dinner along the candlelit paths under a sky thick with stars, the outline of the cliff face above us aglow in the moonlight, all of the niggling travel-day stresses evaporate into the mountain air.

What To Eat: The duck ravioli, served with mushroom cream in a pool of aromatic broth. (What not to eat afterwards: the doughnuts you bought at the gas station on the drive there.)
What To Drink: Red tea, poured into black clay mugs upon arrival. And red wine, ’cause this is still Europe.
Notable Neighbors: El Castell de Guadalest, a storybook-looking castle carved into a shard of rock protruding from the valley.

Casa Bonay feels like the Ace Hotel’s chic Spanish cousin who interned at Proenza Schouler but then, like, wanted to do her own thing. The heritage apartment building-turned-boutique hotel is infused with jewel tones and jungle vibes, but still courses with Spanish flavor (the suite floors feature the building’s original hydraulic tiling from 1869). With its surfer-chic ambiance, countless nooks for sipping cocktails, and custom Hawaiian-shirt uniforms designed by local twosome Batabasta [http://batabasta.com/] (literally translated: “tacky dress”), Casa Bonay was made as much for locals as it was for travelers.

The cavernous hotel entrance off Gran Via de les Corts Catalanes branches into a trifecta of cool-kid hot spots, all in the Bonay family: to the left, Elephant Crocodile Monkey, a restaurant that transforms into a Vietnamese pop-up tavern every day at noon (bao down); to the right, Satan’s Coffee Corner, a vine-draped café with sassy signage and a low-key breakfast menu that rivaled much fancier fare we had in Barcelona; and straight ahead, Libertine, a soul-food-and-emerald-hued speakeasy with what may be the best wallpaper I’ve ever laid eyes on—a cheeky women-riding-tropical-fruit print (a Batabasta original, because of course).

What to eat: The Breakfast Bao at Satan’s Coffee Corner.
Where to drink: The rooftop patio, with its blush-pink sling chairs, frequent barbecues, and 180-degree views of the El Born district’s sandy skyline.
Notable Neighbors: Parc de la Ciutadella for pics ’n’ picnics; the Sagrada Familia, for the love of Gaudì; Passeig de Gracia for all your Stella-Valentino-Kenzo needs.

From the glossy gold elevators to the chevron oak flooring to the veritable sponge cake of a bed (so. damn. fluffy), Dear Hotel is minimalist design meets maximum coziness. After days spent road tripping through the Portuguese wilderness, we were due for Dear’s Helvetica-stamped love notes and relaxed we’ll-take-care-of-everything luxury.

Smack in Madrid’s city center on Calle Gran Via, our eighth-floor suite’s ornate balcony overlooks throngs of shoppers and theater-goers, yet somehow feels completely zen. Where so many other hotel rooms feel like soulless, starchy showrooms, this one has that perfect balance of spotlessness and lived-in comfort—a dreamy apartment with a room service menu. We woke up surrounded by a blush-pink sunrise flooding through the picture windows facing our bed—felicidad total. (That means total bliss. I used Google Translate, like a total ass.)

Sidle out a side door of the Nice To Meet You restaurant (if you haven’t picked up on it, this place is very polite) and up a slightly scary fire escape suspended 14 floors up, and you’ll find the hotel’s raison de rester*—the breathtaking urban-jungle rooftop terrace, featuring the glass-walled Sky Pool with 360-degree views of Madrid’s terracotta terraces. Dear Hotel: when can I come back?

What To Eat: Breakfast in the airy 14th-floor atrium, which is an absolute feast inexplicably included in the room rate. Think: green juices, frothy lattes, and Spanish omelettes.
Where To Drink: The Sky Lounge at sunset.
Notable Neighbors: Literally everything, but, most important, mind-blowing one-euro tacos at Takos.

*Reason to stay. I made up this saying. Re: ass.

A slip of card stock slides under our hotel room door: the Brummell News of the Day, a list of indie concerts, hidden gem restaurants, and insider events curated every day by staffers. Like crashing in your cool friend’s flat (if said cool friend stocked up on Malin + Goetz products in honor of your arrival), Brummell knows what you’re into.

Where some hotels aim to have guests stay within their walls, Hotel Brummell was an explorer’s oasis, with staff keen to scribble the names of their favorite restaurants and sights on the custom-illustrated map we’re handed at reception. But with an in-house sauna and glittering turquoise-tiled pool, the adjacent Garage where you can take a free yoga class or train with a personal trainer, and a hotel gift shop that’s stocked with All Your Favorite Things, there isn’t all that much reason to leave.

Dreamed up by a group of friends (many of whom are sneakily featured in the in-room artwork, photographed standing in the construction site that became Brummell sporting heads of real flowers affixed to wrestling masks), the hotel’s style is a play on “tropical modernism”: airy spaces dappled with natural light, a mix of Sri Lankan and European antiques and custom modern furniture, floor-to-ceiling seafoam-green tiled bathrooms, and plants on plants on plants. If you’re looking for local recommendations, minimalist suites, and the friendliest reception, Hotel Brummell is where it’s at.

What to Eat: Brummell Bravas and breakfast ramen.
Where To Drink: Posted up in a sling chair by the pool, surrounded by an urban garden tended to by Brummell staff (and plucked from by the in-house chef for the restaurant’s daily dishes). You can even use your room key to buy a bottle of cava (and other such necessities) from the hallway vending machines.
Notable Neighbours: Castell de Montjuic military fortress, the palatial Museu d’Art de Catalunya, legendary tapas restaurant Quimet Y Quimet, and La Confiteria cocktail bar where they shot scenes from Vicky Cristina Barcelona.

“Listen to how it creaks.” Our concierge, Nick, bounces his shiny black loafers on the geometric wooden inlay. Our gargantuan suitcases have been whisked away, and we’re being taken on a tour of the Cotton House Hotel, the former headquarters of the Cotton Textile Foundation that was recently resurrected as a luxury five-star boutique hotel, part of the Marriott’s Autograph collection. Luxury is an understatement.

Nick points out the frescoes, majestic marble railings, and stunning spiral staircase suspended from the ceiling eight stories up—all preserved from the Cotton House’s 19th- and 20th-century roots. The bones may be old, but the details—studded-leather suite doors, the plush, silky-soft linens, the lightning-fast Wi-Fi (not always the case in Barcelona!)—catapult the Cotton House into the 21st century. There’s an undeniable gentleman’s club vibe, but infused with a Wes Anderson-esque quirk. Maybe it’s the wine we’re sipping on the sprawling, tropical plant-laden terrace; maybe it’s the custom scent the concierges spritz into the air—a blend of cotton flowers and cotton candy. We’re enchanted—and not in a corny way.

Sip afternoon tea under a watercolor fresco in the impossibly elegant library. Get a shirt tailor-made in the in-house atelier. Take a dip in the rectangular rooftop pool. Watch dusk fade to night while lounging in emerald-hued booths secluded by palm fronds on the patio. Cry because this is not real life, and your house will never look like this.

What To Eat: Lobster toast at the in-house Batuar Bar & Restaurant.
Where To Drink: Outside on the rainforest-esque terrace, listening to the omnipresent soft jazz croon from the speakers we can only imagine are hidden in the plants.
Notable Neighbors: Palau de la Musica Catalana, a gorgeous concert hall encased in sculpture and stained-glass (highly recommend checking out who’s playing here while you’re in Barcelona—we saw Benjamin Clementine and I still get a little misty-eyed thinking about it). A short walk away is Espai Barroc, where you can catch one of the nightly flamenco shows before grabbing tapas at El Xampanyet next door.

*Honorary mentions go out to the Margot House Hotel (Barcelona), Hotel Ayllon (Segovia) and Hotel Aire de Bardenas (Navarra), which we didn’t have the chance to stay in but you should also definitely check out.

Hotels
More From the series Travel