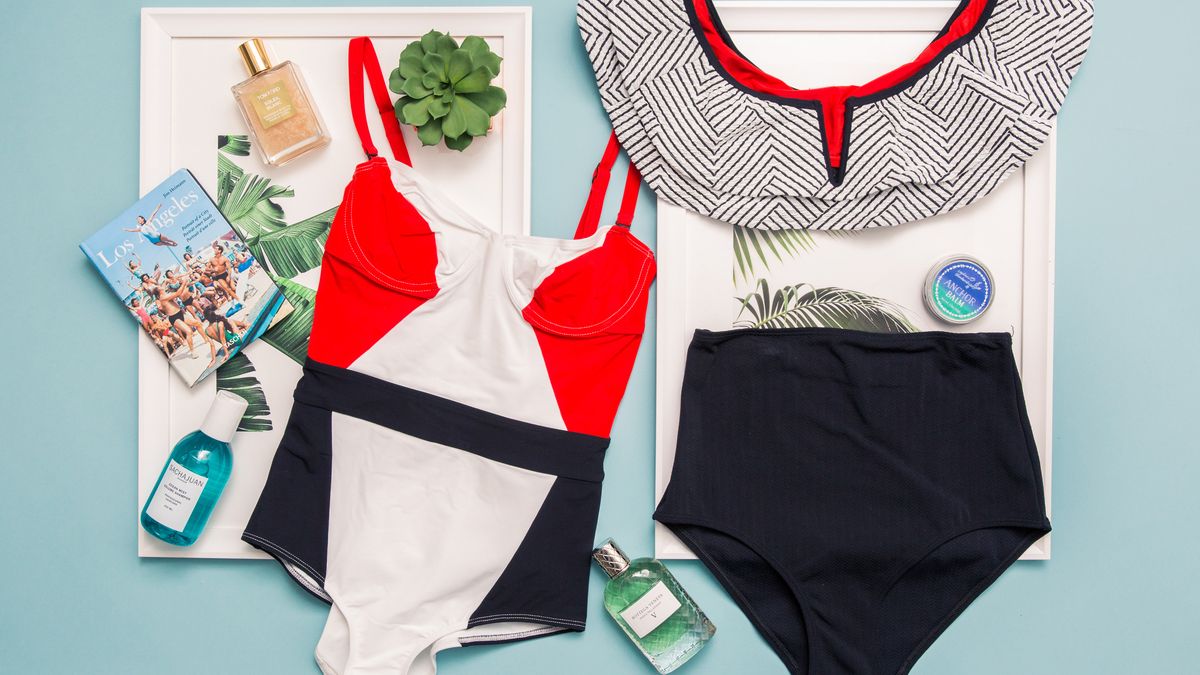 Flagpole has remade their house signatures in the most glamorous way ever.

Fashion collaborations are a dime a dozen. Seriously, though: you can’t walk through Soho without seeing a billboard, storefront, or activation touting some new limited-edition ~collab~. The result is that it doesn’t feel so limited after all. But there are a few that make us sit up and take notice. Like when a little birdie whispered in our ear during a presentation last Fashion Week alerting us that two brands that never collaborate were coming together for a collection that really is limited—and feels like it, too.

With that in mind, may we present you with the most glamorous bathing suits this side of the French Riviera: the collaboration between small but super luxurious swimwear label Flagpole, and ultimate in American fashion, Oscar de la Renta. The whole thing came about with with the help of Erika Bearman, who now consults for Flagpole, but made her name heading up communications for Oscar de la Renta (she was the original @oscarprgirl). The collection of six bathing suits is the kind you would wear at the Hotel du Cap or if you’re the type to be “in residence” at the Beverly Hills Hotel—i.e., they look as good outside the pool as in it. What’s more, you get the same power fashion vibe that you might in an Oscar de la Renta gown, in a bikini—all the design signatures are there.

And there’s a reason. As it turns out, Flagpole designers Jaime Barker and Megan Balch took very specific inspiration from all those Oscar favorites—off-the-shoulder, tassels, pleating—for each and every bathing suit. We asked them to take us through their inspiration.

“The inspiration for this off-the-shoulder piece came directly from the Oscar de la Renta design studio where we first met to discuss doing a collaboration. After returning to our studio, we were looking through the pictures we had taken of their inspiration boards, when we spotted in the background a gown that was a being draped on a dress form. It had the most beautiful off-the-shoulder voluminous ruffle, so we asked if we could come back in to take another look at it. We learned that the off-the-shoulder ruffle has been a staple of the Oscar de la Renta collection since the ’50s, so it seemed like the perfect piece to translate into swim.”

“The shape and fabric of the Naty suit was inspired by images of the ‘East Meets West’ story the Oscar de la Renta design team had been working on. We loved the wrapping and folding techniques in the images from the east and wanted to figure out a way for that to make sense in swimwear. We chose a fabric design that already had a lot of movement in it, so that with simple pattern tweaks we could make it appear to have lots of folding layers while leaving out the bulk, so that the suit is visually striking yet incredibly functional.”

“The Lynn is a best-selling Flagpole suit and we were excited to put an Oscar de la Renta twist on it. For the first time we got to produce the suit in a beautiful white textured fabric with a removable sash. The idea of the sash came from inspiration images from the design team that were being pulled for their ‘East Meets West’ story. The shape of the sash was inspired by images of the east, while the gold color was pulled from images representing the west.”

“Pleating is a staple of the Oscar de la Renta house and a technique we wanted to challenge ourselves to incorporate into swim. We learned so much about pleating from the design team, but traditional pleats on our fabric will not withstand repeated trips to the pool. We were so in love with this idea, though, that with our pattern maker, we came up with a roughing technique that mimics the pleat and will withstand any dive into the water.”

“We have always been huge fans of Oscar de la Renta jewelry, particularly of those amazing tassel earrings. Jaime was determined to find a way to incorporate them on a suit. We loved the idea of drawing as much attention to the tassel as possible, so we decided to keep the suit clean and sophisticated in the front, and to have the back completely open so that the suit and body are literally framing the iconic tassels.”

“The Babe suit was the most natural blend of our brands. We found an image of a swimsuit from a past Oscar de la Renta runway show that had similar design lines to the body of one of our best-selling one-pieces. We loved the way they had color-blocked their suit, so we changed the top of our suit (also taking advantage of customer feedback yearning for a one-piece with underwire) to create a piece that truly combined our aesthetics.”