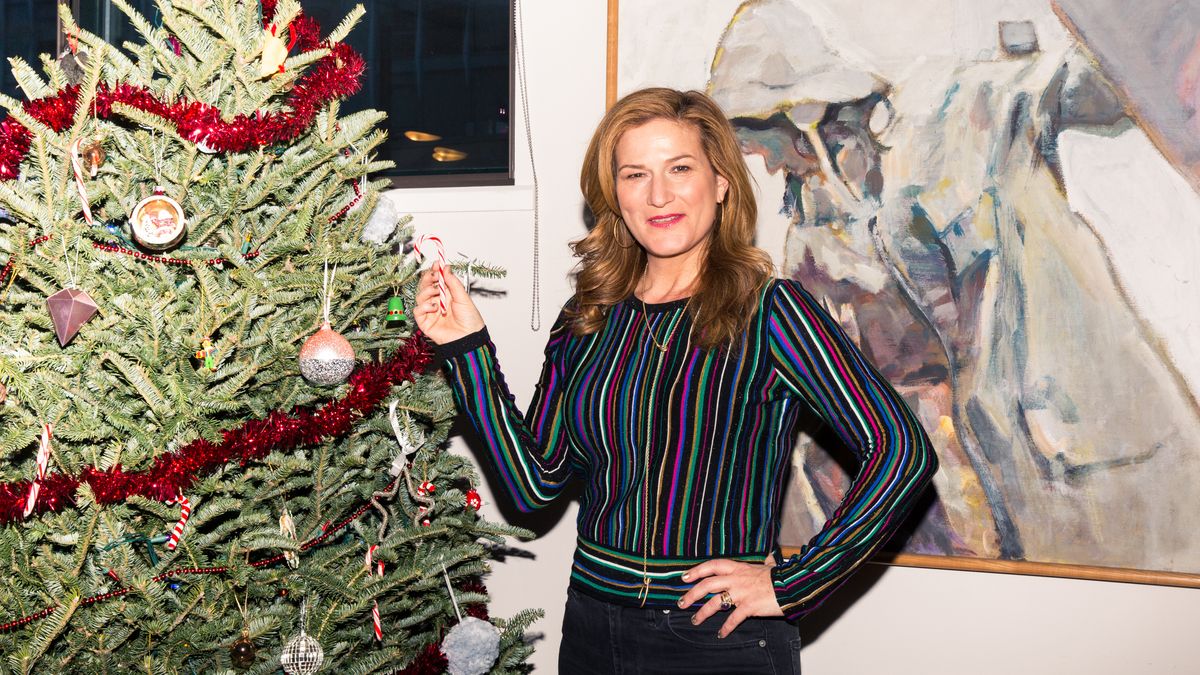 Like that she’s on a group text with our female comedy heroes.

When we found ourselves invited to Ana Gasteyer’s Brooklyn apartment one Friday for a cozy afternoon of tree-decorating and onion soup-making (you can see the video here!), we couldn’t help but grill her about every other aspect of her life. For example, did you know she teamed up with Amy Poehler to raise over one million dollars for Hillary Clinton’s campaign? Because she did. Or that she loves the Northwestern Wildcats? We thought not. Here are five things you probably don’t know about one of the funniest women in the world.

Love Ana as much as we do? Catch the season finale of her show, People of Earth, tonight on TBS.

She knows how to throw a damn good party:

“My favorite number-one cheapest, snazziest thing you can do at a party is hire a piano player. It’s like $150 bucks for the night, and there is just nothing more fun than people getting drunk and singing at the end of the night. That is always my goal. It’s truly as old-fashioned and fun as it gets at a party.”

She has crazy Northwestern pride:

“I just have Northwestern Pride! That’s all. It’s great. I went there as a voice major and I graduated from their theater school, which is a really well-known program and it was awesome. I loved going to college in the Midwest and you know, I think I went to one football game the entire time I was in college; it wasn’t a big part of what I do, but just in terms of alumni pride for sure. As I’ve gotten older, I’ve gotten hokier and more traditional about that. I used to completely make fun of people who wore purple sweatshirts and now I’m taking my whole family and we are going to dress all in purple and cheer on the team.”

Kathy Griffin played a hand in getting her on SNL:

“I was in Chicago [for college,] which is the home of improv comedy, and I met the comedy kids and realized I was one of them. I graduated with a degree in speech and drama, and because I did a ton of improv comedy in college, I was encouraged to go out to L.A. I met Kathy Griffin at an audition within the first couple of weeks. She is basically very bossy and told me to do The Groundlings [the legendary L.A. improv theater and school]. And at the Groundlings I was discovered for SNL. I loved it, had an extremely lucky break and got on SNL.”

She’s on a text group with her friends from SNL [ed note: we want in]:

She’s got your back:

“I watched Nora Dunn and Jan Hooks when I was in college and was aware, and Gilda [Radner] and all of the really talented iconic female comedians. But the Groundlings, one of the reasons I was drawn to it was when I went into the program, Jennifer Coolidge, Mindy Sterling, Kathy Griffin, and Lisa Kudrow and all these really, really funny, original women with strange and original voices were in the main program. My very early days at SNL were with two just total comedic powerhouses, Cheri Oteri and Molly Shannon. We were sorta lone wolves. There weren’t a lot of us. Paula Pell wrote on the show, and two other female writers. We were outnumbered and just had these willful blinders and wrote every week and didn’t really think about it in terms of a gender issue. By the time I left there were six or seven women on the show, which is a radical difference from three. We doubled our numbers! Now my closest community is female comics.

“As you age too and you begin to appreciate. We are in such an interesting radicalizing feminist time. It’s important to count your numbers and have each other’s backs. It becomes more important than ever. As I’ve gotten in my forties I’ve become very close to other female comics who share a lot in common with me, who have families and were outnumbered in their workplaces. We are all still really outnumbered, so it’s important to offer support to each other.”