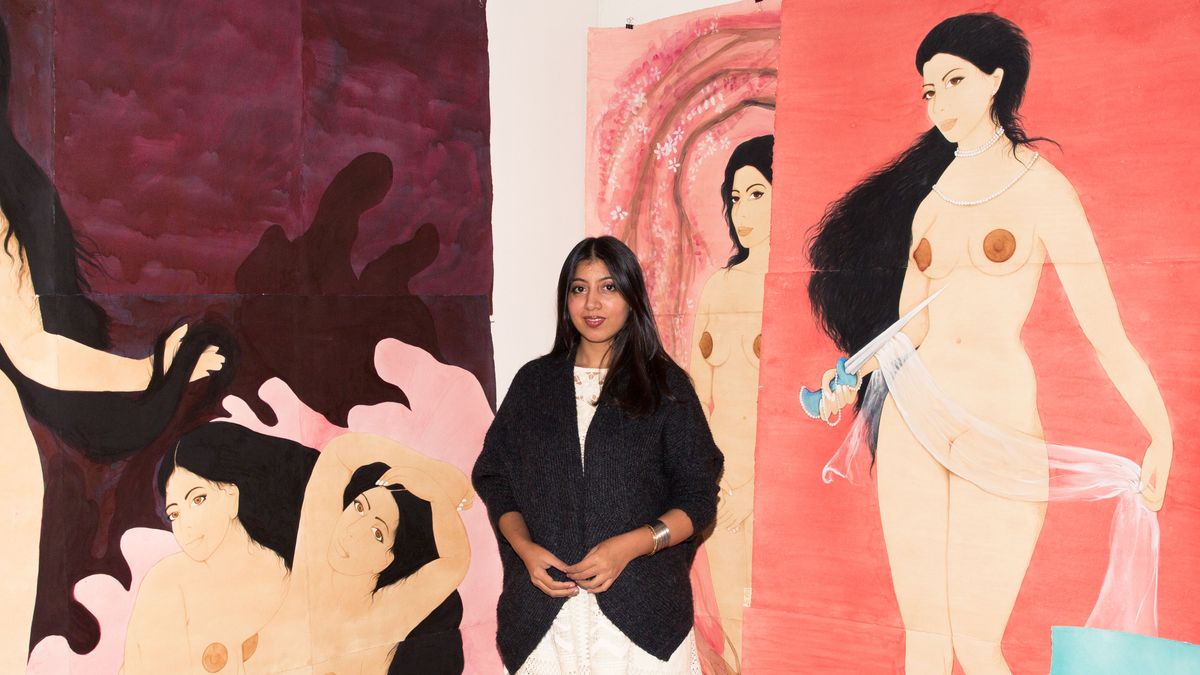 Hiba Schahbaz on painting herself nude, and her reaction to Trump’s presidency.

Visiting Hiba Schahbaz’s Brooklyn studio is literally like stepping into wonderland. The space is immaculate, and from every wall, larger-than-life nudes with wide eyes and gentle features look back at you. The scale is especially impressive considering Schahbaz herself is quite petite—but then, looking from the wall back to Schahbaz, you begin to see a resemblance.

“My parents live in Pakistan. I’ve been drawing myself for a really long time—since I was a teenager,” she says “My parents are really traditional, so even they want me to just paint landscapes [laughs].” Schahbaz comes from a very formal training in miniature painting, a centuries-old Indo-Persian technique of painting heavily detailed, hyper-stylized scenes that show a representation of the world without replicating it exactly. For religious reasons, the artist isn’t supposed to paint faces or figures realistically, so as not to compete with God. Compound that with the additional shock of nudity: “Muslim women don’t really paint themselves naked, but I think part of making these paintings has been me putting my life into context.”

The artist, who moved to New York from Pakistan six years ago, has steadily been expanding her practice beyond miniaturism to these grand-scale versions of old-master paintings. “There aren’t a lot of working artists who just arrived here from South Asia,” she says. “The market for miniatures is still kind of obscure, and we don’t have a huge market for our work. That could also be the galleries I work with that tell me America is more conservative than maybe I realize. So having these giant naked women with giant nipples is really not the way to sell work [laughs].”

The reality of a young Islamic woman making art with her own nude body is likely to be surprising to many Americans, especially in the context of the current political climate and misinformation about Islamic culture, and widespread Islamophobia. “I think the election will impact the art world, I think it will impact me too,” she said when asked about the election. “I responded to the elections first as a female. I was pained as a woman first, even before worrying about how it would affect me as a brown Muslim immigrant.

“I felt very rejected as a woman and I think a lot of women maybe felt that. So for a change, the next painting has already started forming in my mind, and it’s a little darker. As for the art world, I think that the artist community, from what I could tell, is pretty devastated. When people are feeling unsafe or angry, as an artist it filters into your work. We will be seeing a response.”

But despite the resemblance, her works aren’t meant to be her...exactly. “Even though I give her my face, most of the time, it’s not always just about me or my personal life. It could be about a whole region of women, or it could just be a feeling I get from reading something.” By using her own body in her work, she hopes to speak to universal themes or feelings, that usually directly resonate—especially with her female audience.

“When I worked in Pakistan, I used to purposely not draw the face firstly because of religious reasons, but I kind of wanted classical deniability that it’s not me [in the paintings]. I would just leave the face blank. A miniature also has a tradition of profiles. So when I got here I slowly started painting myself in profile. I remember I sat down and painted a hundred profiles, because it was like learning how to paint faces after a decade of leaving them blank. This year she [the woman in the paintings] turned to to face the viewers. Now I can see how her gaze is a little more confrontational, and I’m really interested in that. I’m [also] interested in her connecting with whoever’s looking at her. I feel like she was very detached and not really a part of the world around her, and she’s kind of integrating into it slowly.”