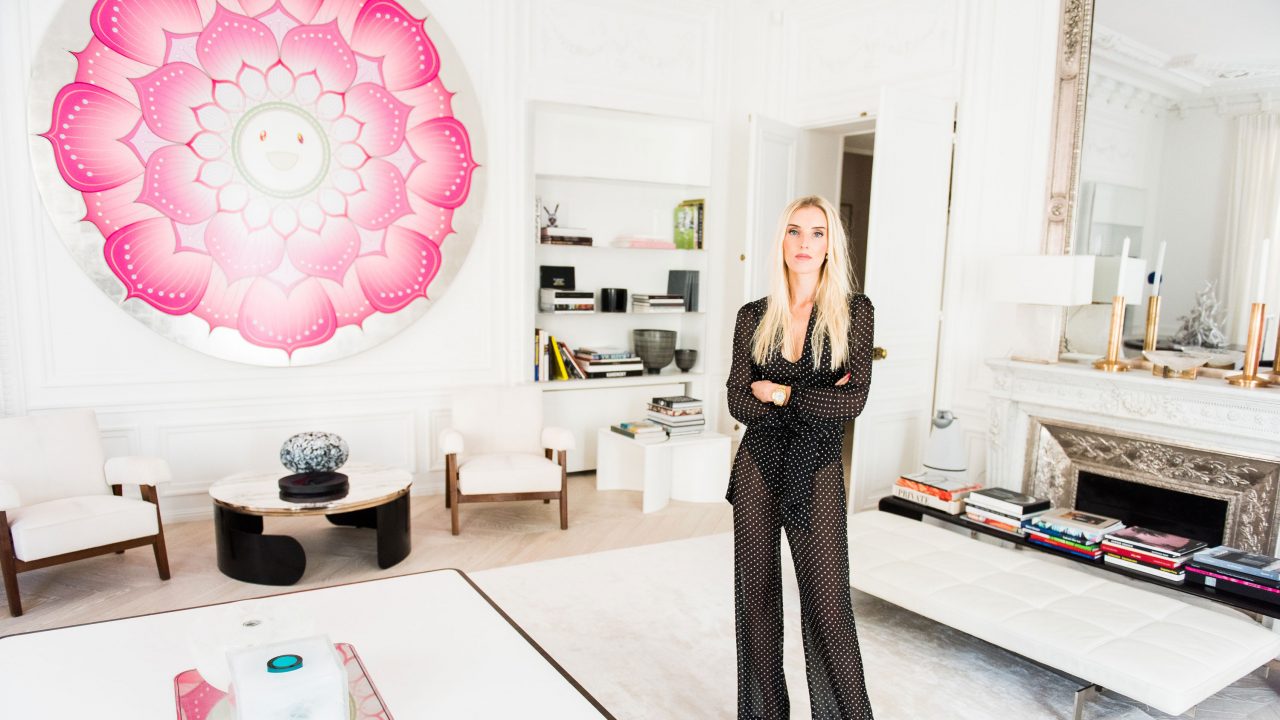 A Peek Inside One Style Star’s Chic Parisian Home

Carole Tessier’s art-filled home is even dreamier than you’d expect.

Before you peruse the images below, consider this: Preciously Paris designer Carole Tessier’s home was absolutely not what we expected. Imagine an archetypal Parisian home, and you think old-world charm—non? What we walked into can best be described as an art-lover’s dream; all white walls and Murakami.

As the mother to six girls under the age of eight (!!), there were decidedly girly touches sprinkled amongst the insanely-sophisticated decor. All of it in keeping with what Tessier described as a “funny spirit.”

As the designer behind some of the cheekiest embroidered clutches we’ve ever seen, (um, hi) that dedication to not take things too seriously makes perfect sense. Tessier, who started in fashion with a few pairs of custom-embroidered jeans, and now has an ongoing collab for charity with none other than Natalia Vodianova, is officially living the dream in Paris. Click through to see exactly what that dream looks like, and how to live the fanciest life ever.

“I don’t eat sugar. I eat fruit, but no sugar in food and I don’t drink. I don’t drink milk or cheese. Well, I eat a little cheese.”

“I love mixing denim with sophisticated shoes to keep a feminine touch. I hate sneakers! I only like heels. I think jeans can go with everything, you just need nice accessories.”

“I began [selling my clutches] with Colette in Paris. I was very happy with that, that it began like that.”

“I began working with some custom curtains and cushions. It was an interior decor project of my husband’s. I fell in love with embroidery, so I decided to wear it myself. I embroidered patterns on my jeans, and I went to Art Basel in Miami in 2010 and all the women were excited about that. So then I embroidered on their jeans! I couldn’t create a collection because it was just custom for clients. So then I decided to create a clutch collection with embroidery four seasons ago.”

“Everything inspires me. I am very inspired by contemporary arts. I do all the shows, all the art fairs.”

“He [my husband] decorated a lot of residencies with art, so we do that together—it’s a passion for us. I always am very inspired by the material, with interior design and fabrics.”

“I gave [Natalia Vodianova for Naked Heart] a clutch for donation two years ago in Monte Carlo. We created a special clutch for the auctions. From that I began to get interested in her foundation.”

“I love to go to New York. I love going to Madison Avenue and to Soho. I love Paris too. For art we’re doing the two big art fairs in Miami, Art Basel. In France we love Galerie Emmanuel Perrotin, he’s a friend [of ours] and he has a nice exhibition.”

“The biggest challenge is to be a small brand. Being around those bigger ones with so much power and money, [it’s a challenge] to emerge.”

“I love the way of life here [in Paris]. I love architecture. I’m crazy about stone buildings, and I love terraces.”

“I like a woman who is chic, like Grace Kelly. I’m not inspired with a lot of fashion now.”

“[My first fashion splurge] I think was a CHANEL bag. It was my first pay check [laughs]! But I sold everything. I have no bags anymore because I was fed up that everyone had the same bag. I got rid of all of the bags [laughs]!”

“We always go to the Costes [restaurant] and it’s always nice. In the summer we go to Italy, and in winter it’s very cozy with the chandelier.”

“Every Preciously Paris bag has 20-30 hours of work on the embroidery, and they’re all made in Paris.”