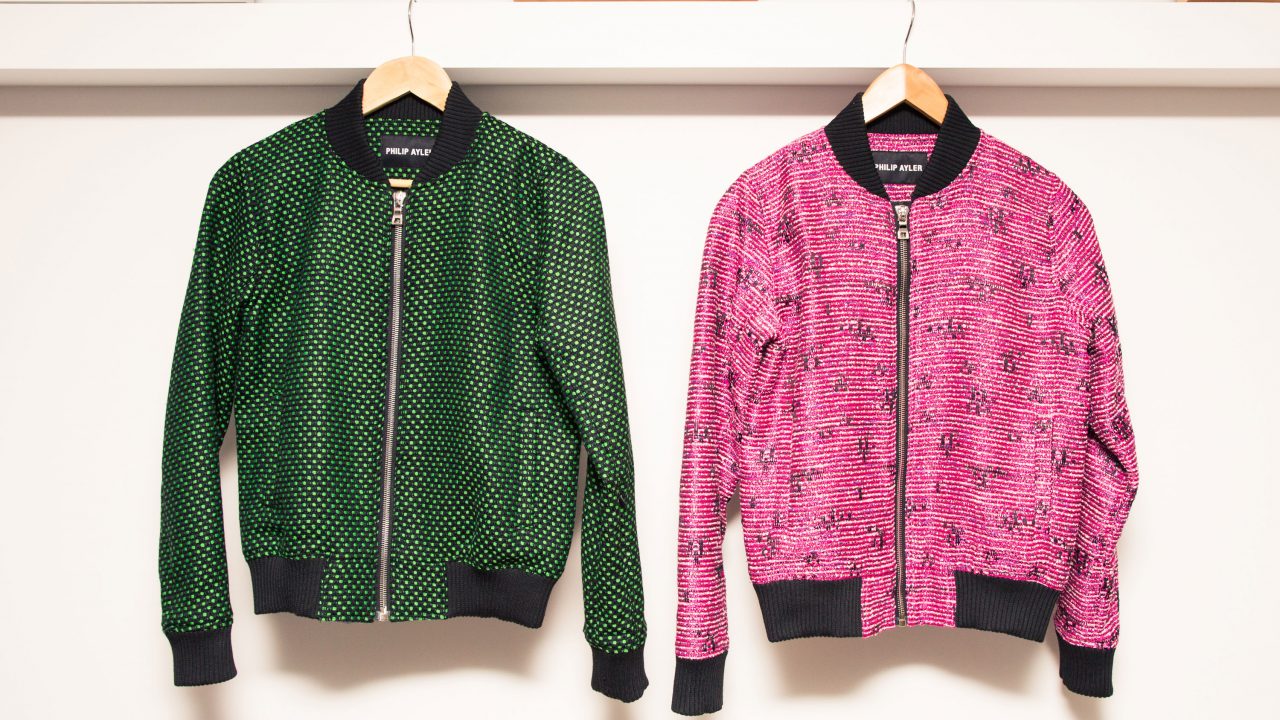 Ayler Young is scouring the markets of Paris and Milan for the ultimate in outerwear.

We’ve all experienced those exhilarating attempts at uncovering the *perfect* vintage CHANEL jacket from the depths of a vintage shop—a one-of-a-kind treasure that fits like a dream and goes with everything from ripped jeans to evening wear. A scenario like that is real only in a fashion wonderland, but in the real world you more often than not end up frustrated and jacketless, sipping tequila sodas with your shopping buddies, trying to forget the struggle. Ayler Young understands the hunt and has vowed to take over from here on out.

His Philip Ayler label is a limited-edition line of his-and-hers bomber jackets made from fabric that is more often associated with the coats walking down a Parisian runway than swathing an L.A. pop star. A former musician turned entrepreneur-slash-new designer, Young has quickly become an indie fashion star, with everyone from Gigi Hadid to Steven Tyler scooping up his bombers. He sources vintage material, like CHANEL bouclés and vivid silks, for his couture-like creations, reworking the standard oversized bomber fit into a slimmer, more modern silhouette. And then he adds surprise details like a hidden sleeve pocket and a reversible lining. With a background that spans everything from developing eco-friendly camping equipment to launching a burlesque club in New York City (no, really), of course it’s a guy like him who would think to make the season’s It jacket in the most timeless fabrics. Talk about a genius equation. 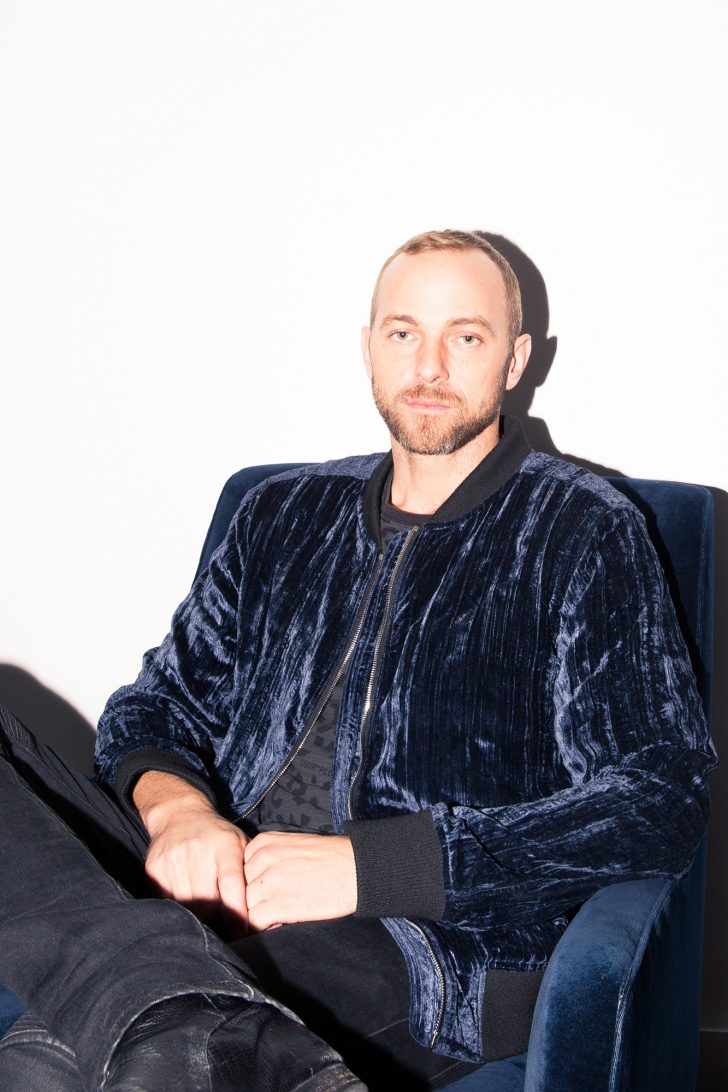 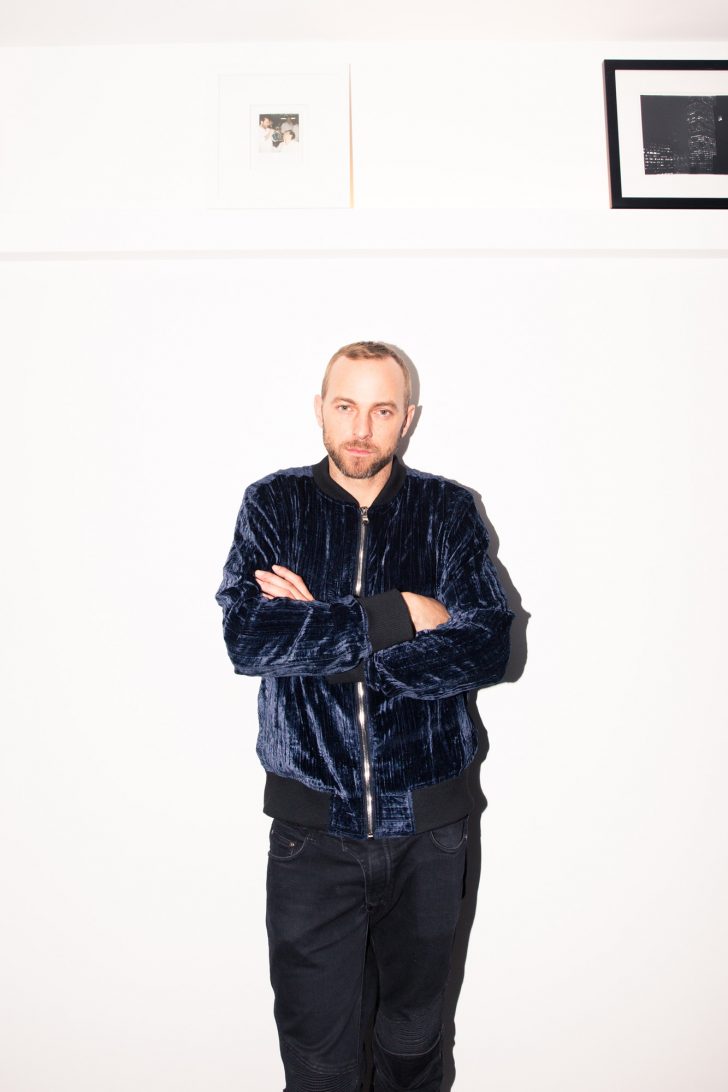 How he made the move from musician to fashion designer:

“When I first moved to New York, I worked with a company [called Endstar] that actually started designing their own textiles out of 100-percent recycled material. That was in 2002. We couldn’t find the materials that we needed, so we ended up working with DuPont at their research facilities and designing our own pattern, weaving recycled plastic polymers. So that was sort of my first foray into working for a company and thinking about fabrics, going to trade shows, and seeing the whole industry. Then I started to travel a lot. I started to make suits in Hong Kong when I was there and leather jackets in India. Wherever I traveled and wherever there were markets where I could create, I would start to make stuff. Music and fashion are related. My musical career is more about the creation of new songs. I started taking all these elements and making something beautiful out of it. You have the drumbeat, you have the bass line, guitar line, these very different elements [create] one whole. And each of my jackets is made out of 38 individual pieces.” 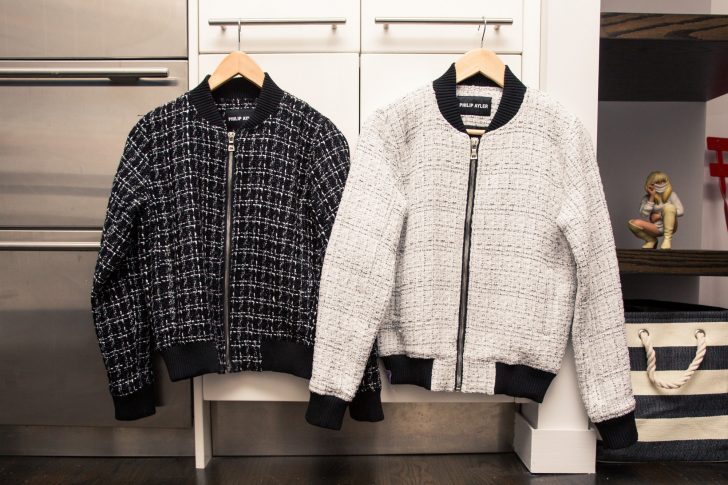 The (literal) dream that started the Philip Ayler line:

“I started making these jackets [because] I had this really vivid dream about me traveling around the world wearing this burgundy bomber jacket. I didn’t know where it came from, but it stayed with me when I woke up. I just couldn’t get it out of my mind. [That morning] I was doing dishes and I got a phone call from a close friend of mine who’s a stylist and 15 minutes later she pulls up at my house, hops out of her car, and is carrying a burgundy bomber jacket. I literally got on my knees outside of my house and said, ‘This is the strangest thing that’s ever happened to me, because I had a dream about this jacket last night.’ I really fell in love with that jacket. It fit me perfectly. I was getting so many compliments that it made me feel like I could wear it anywhere: to a rock show, to a fancy dinner at Chateau Marmont, anywhere. So I found a pattern maker to make a pattern in case I ever lost it. I wasn’t really planning on starting a company, but I was like, ‘Oh it’s fairly expensive to make your first pattern, because we have the best pattern makers in L.A.’ I started to look for fabrics, zippers, places that made trim. I made about two sample jackets with the sewer, adjusting them, changing the inside pocket, adding this, adding that, changing all the stitching on the jacket. But it was literally the fit of this particular jacket that was given to me—it was a slimmer fit for a bomber jacket. Most of them are sort of bulky and this just seemed to be a little more elegant. It had nicer, more modern lines, and it was really that original gift and that dream that inspired me to continue making them.” 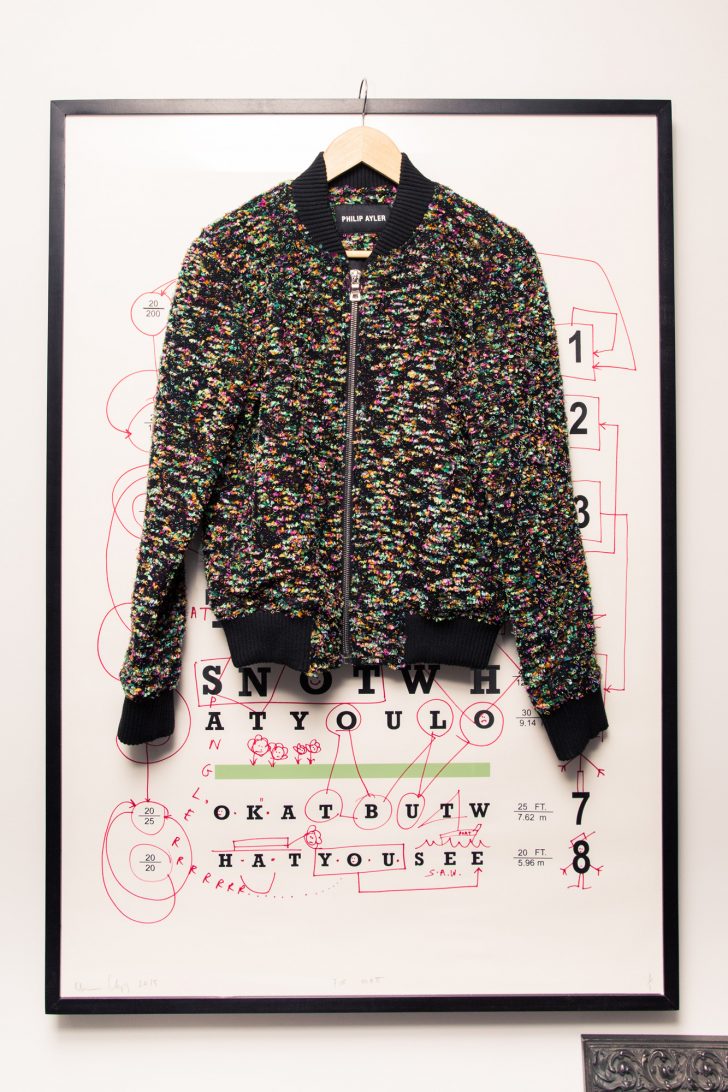 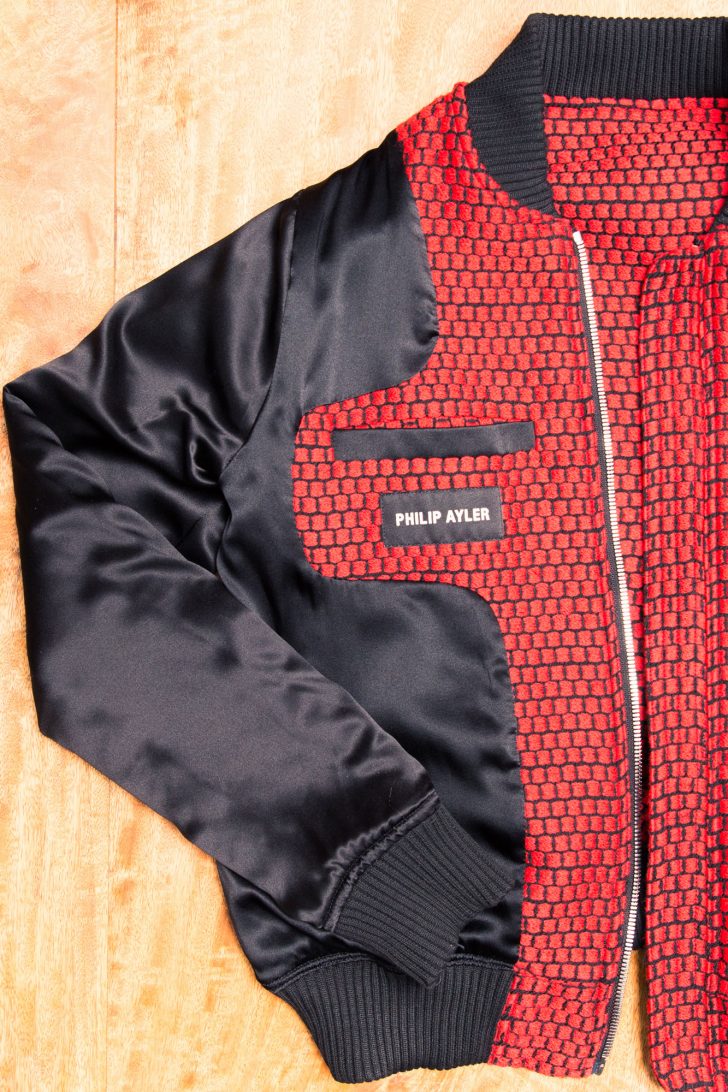 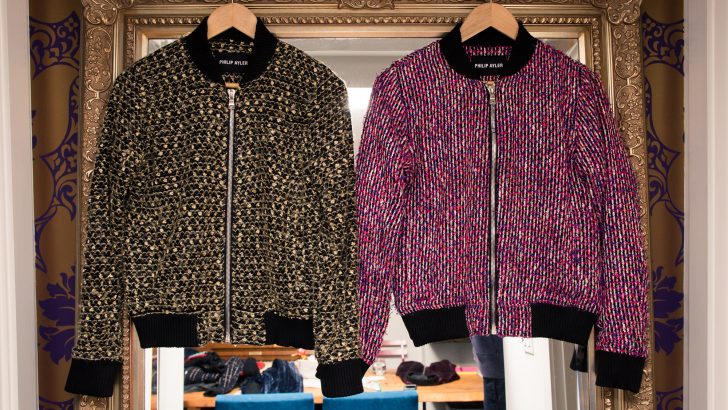 How Guns N’ Roses helped give him his start:

“I think it was my second jacket that I ever made and I wore it out to a party one night. The tour director for Guns N’ Roses ran up to me and was like, ‘Hey, where did you get this jacket?’ And I said, ‘You're not gonna believe this, but I actually just made it.’ He asked if I would make them for his band, and I said, ‘What band is that?’ And he said Guns N’ Roses. I almost didn’t believe him at first, but the next day he sent me a list of names and sizes, and at that point I didn’t even have a size run of the pattern. I chose a black, 100-percent poly satin for the exterior because of how durable it was. I knew they would be taking them on the road. I lined it with red silk and then I did little accents of red silk in the pockets. At first I thought it was just going to be for the band members, [but] then they returned all the jackets that I sent to them. I was a little taken aback but they were like, ‘The band doesn’t want to accept them unless you make them for every single person on the tour.’ So I think I ended up making 250 jackets just for them. They were getting so much attention because I made them for Coachella, where they were headlining. So when they were about to launch their tour they asked if I could manufacture thousands of them.” 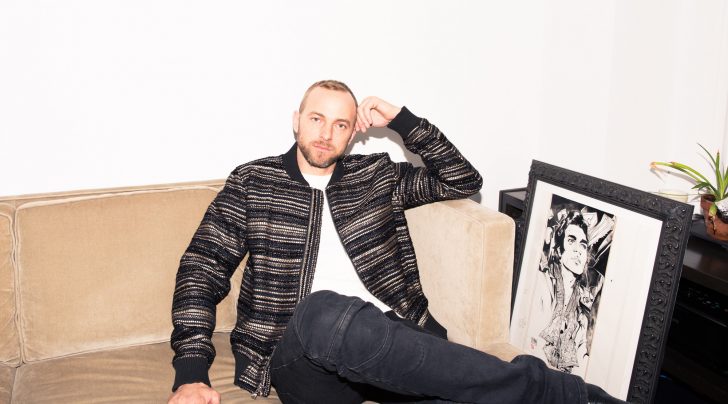 How he’s reworking a classic:

“[The aesthetic] is fun. You can throw a t-shirt on under one of these bombers and go anywhere, because it’s not a complicated piece. For me it’s more about the touch and feel of these old vintage fabrics that are really rare. They’re not being made in the same quality as they used to be. It’s what I started to fall in love with when I was picking fabrics. If you put one of these next to pretty much any other fabric, you can tell the difference. They have more wow in them. They’re exceptional. A lot of them are handmade in France or Italy. A lot of the mills have gone out of business, but it’s really just finding the most exceptional fabrics on the planet. That’s sort of where I saw the company going. I could definitely find less expensive, comparable fabrics, but I really try to find the best of the best. And it’s a more modern fit. People’s bodies have evolved. [They] aren’t the same as they used to be 50 to 100 years ago. People are more casual nowadays. People don’t always wear suits. But these jackets can be worn to a gala event, on a red carpet, or to dinner at your local taco shop.” 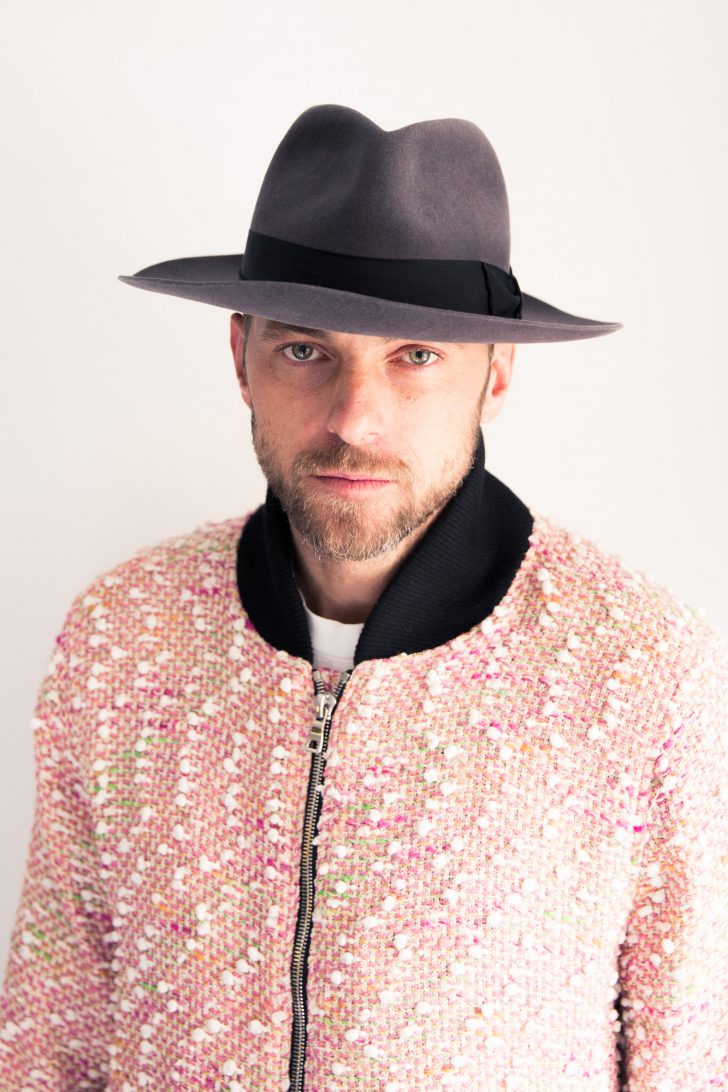 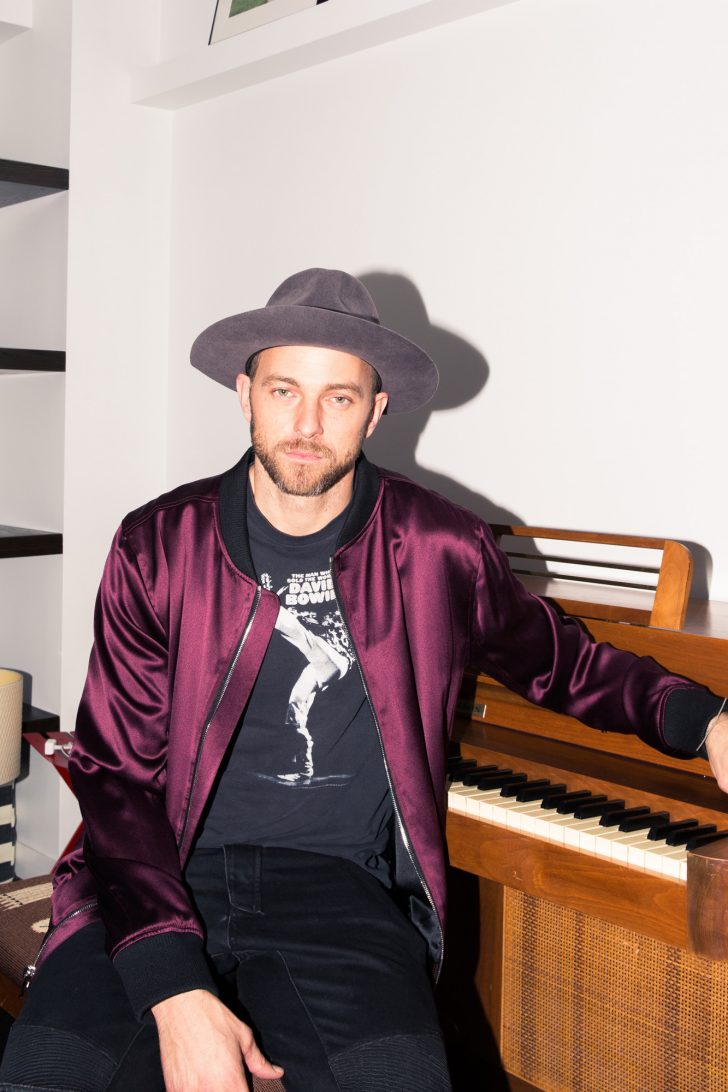 What he’s learned from his other ventures (including working with Robert De Niro):

“I had been in the service industry most of my life, always working for other companies or other people. I worked for Robert De Niro for many years. I was the GM of TriBeCa Cinemas. I would do all of his special events, about 500 private events a year. We ran the TriBeCa film festival and all the ticketing for that. I was one of the founding partners of The Box here [in New York]. I always try to do things a little bit differently. One of my mentors in business as I was starting this company said, ‘Remember KISS: keep it simple, stupid.’ And that’s sort of what I’ve been trying to do: just keep the concept simple. Everybody’s like, ‘you should do this or you should do that’ with a different product, but I’m really happy making the best-quality jackets that I can and focusing on that one thing and not make it too complicated, but also be able to give my customers that attention and focus on that one great product I can offer them.”