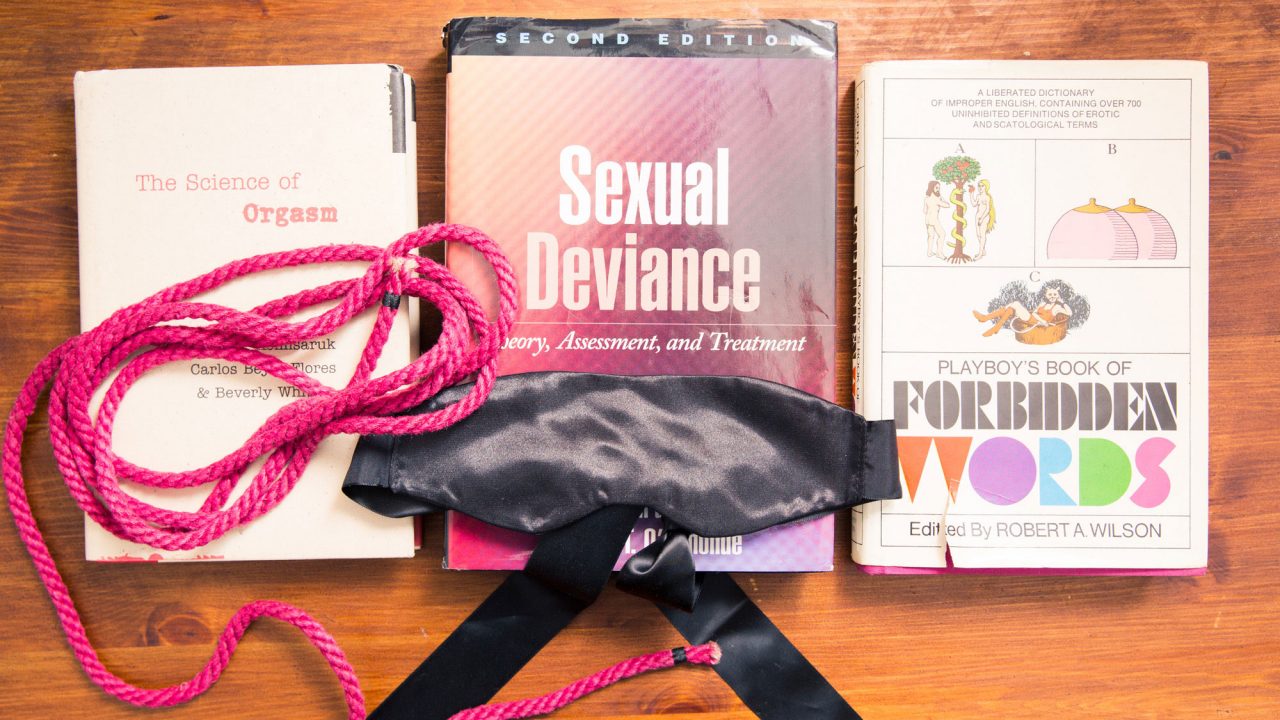 You need her investigative sex Vice show on your watch list.

We’ve been following Karley Sciortino’s writing for a long time—on her website, Slutever, and on Vogue.com—and will listen to what she says when it comes to just about anything, from life advice (spray CHANEL No. 5 on your lingerie) to health tips (group classes don’t work because group activities should involve at least one cocktail). Which is why we were so excited to hear that her nascent web series with Vice, aptly called Slutever, was making a return to explore new sexual taboos Sciortino has uncovered in her research (please see the below photographed books for a sampling of that). Here’s how it works: Sciortino is curious about lifelike male sex dolls or BDSM abduction or one of the other subjects she gets (deep) into in this series, so we’re curious. The last in the series of four is released today—and after reading this interview, about how her perspective and reach is both feminist and mainstream and why she wants to be Diane Sawyer for sex and relationships, you’ll most definitely want to watch it. 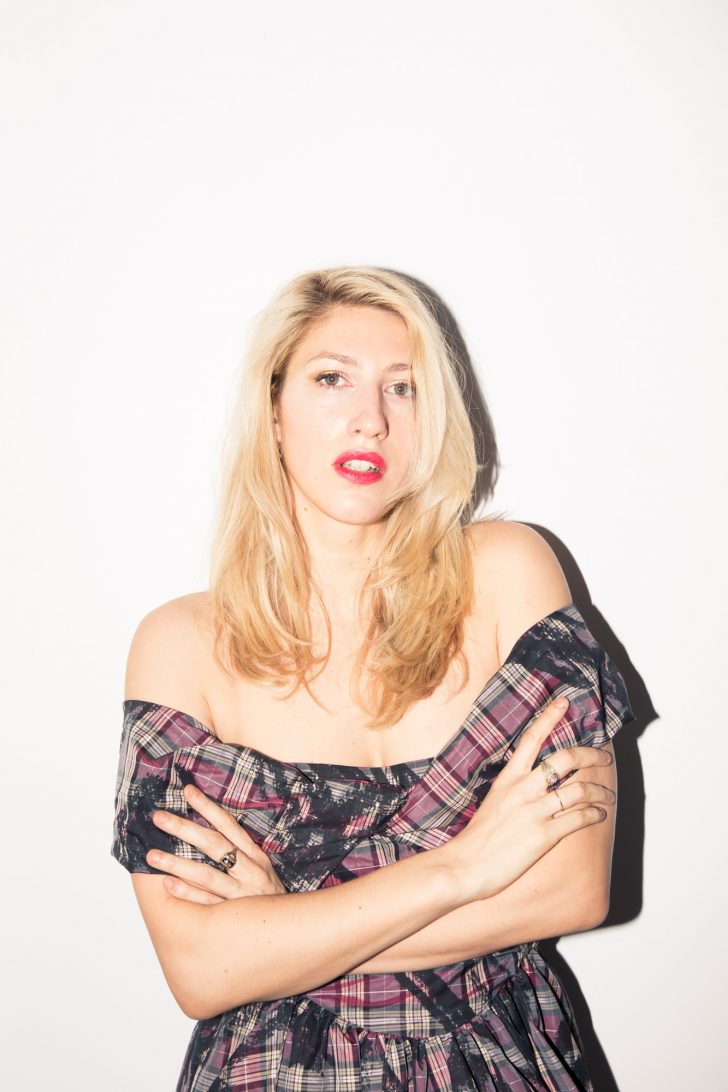 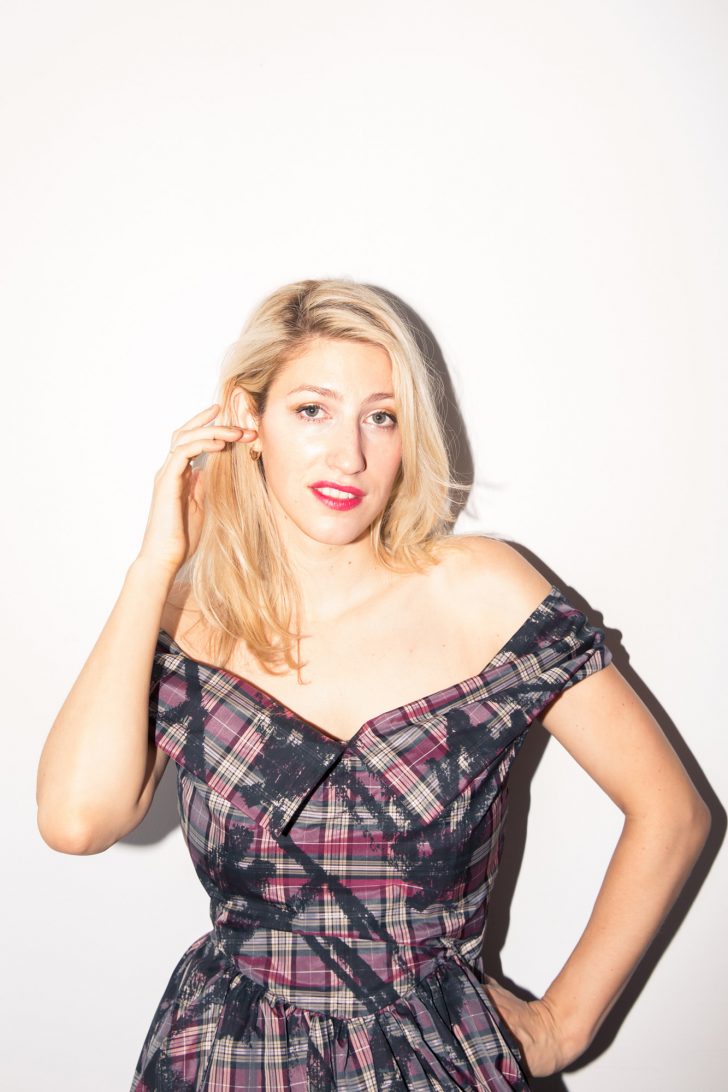 The goal of the show:

“I think the show is open-minded and deals with the subject of sex sensitively, but in a funny way. Often, it’s easier to discuss sensitive or taboo topics when you’re adding an element of humor—it makes it a little less awkward. The ultimate goal was to humanize marginalized or taboo sexual topics and subjects.”

How she chose the episode subjects:

“We felt these topics are things that haven’t been discussed hugely and that we wanted to give a different perspective on. For example, the first is about male sex dolls. It’s a subject that’s covered quite extensively from a male perspective, and we thought it would be interesting to investigate this idea that women would want a sex doll. We visited a company in L.A. who have created anatomically correct, very expensive male sex dolls. A stereotype of female sexuality is that women are more emotional and men are more physical and visual, so men would want to have sex with an inanimate object that looks like the quote-unquote perfect woman, but a woman would never want that because a woman’s looking for an emotional connection. These doll makers tried it out to see if there’s a market for it, and what they discovered is that there is a surprisingly large market, and now they have male dolls on back-order. The buyer is not even who you’d necessarily expect, it’s a much larger variety of women than we thought.

“A lot of even what I’ve chosen to write about over my career as a writer, I intuitively decide to investigate based on my own curiosity. If I think it’s interesting and if I don’t know anything about it, or if it seems new to me, then I assume [that] other people would feel similarly. With the male sex dolls, I had my own assumptions that were rooted in stereotypes about who the woman that would want that would be. I was really surprised just to find the reality that most of the women that buy them are from red states, very Republican states.” 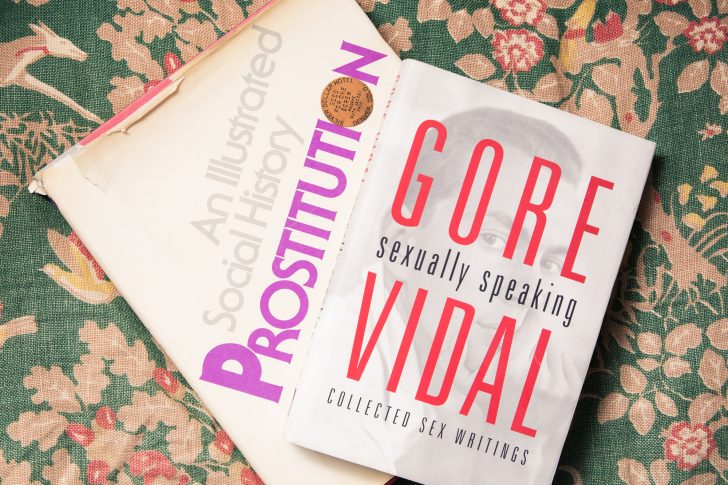 And then there’s the episode about sex and disability:

“The topic of sex and disabilities has also been something that I have read about over the years quite a bit because I had a boyfriend who was disabled for four years when I lived in London. And over the course of my career I’ve interviewed a lot of people about how their disability affects their sex life. I think we tend to desexualize disabled people. The episode about that is a really great cross section between sex and disability and also sex work, which is another taboo. I was interested in looking at it in a more humanizing light: these women [who are hired as sex surrogates] exist in a gray space between sex workers and health professionals. They are sex surrogates who have a health background that specifically cater to offering sexual services to disabled people. A lot of people would say sex workers are bad or desperate or their motives are questionable, but look at the positive effects the service has on both the lives of the providers and the clients. The goal is that people leave the show having a different perspective on both sex and disability and sex workers and their rights.”

How she found the most taboo subjects for the series:

“BDSM is far less taboo—Fifty Shades has completely changed our perspective on that. One episode we did looks at an element within BDSM that even people who are now more open-minded about BDSM-light, so to speak, they might still look down their nose and think, ugh, that’s a bit too much. We looked at these people with really extreme abduction fantasies who pay a lot of money for these complex abduction stories that play out over a month. They can involve four or five people and a lot of elements like blackmail, harassment, planning, surprise abductions when they’re walking home from work and then kidnapped and held hostage for a day. People might think that seems like a bit too much effort. We interviewed a doctor of psychology who’s a sex researcher at NYU, and one of the things she said was that no one is judgmental about the fact that people put in a lot of money and time into other things in their lives that they want—they spend a lot of money and time planning their vacation or birthday party. Why do we look at people who spend a lot of money and time planning the execution of sexual fantasy and be like, chill out? Maybe it’s not so weird, because planning birthday parties is also kind of embarrassing…”

The episode that surprised her most:

“We went to Japan for the final episode and looked at this new industry of women paying for rented boyfriends. It’s about how women are gaining economic standing in Japan, and along with that they are less reliant on men for financial stability and support, and that means they’re staying single longer. Out of this new social trend has emerged this industry of companionship. I’ve never been to Japan before and you can’t project your own cultural identity onto them. It took getting used to, because I kept wanting to ask the women about feminism and assuming things based on what American perspectives are. It was crazy that we kept asking these young women in Japan about feminism... They don’t have a feminist movement there, but it doesn’t mean they’re not empowered or progressive, they just don’t use the same terminology. I had to learn to interview people in a way that’s a little more open.” 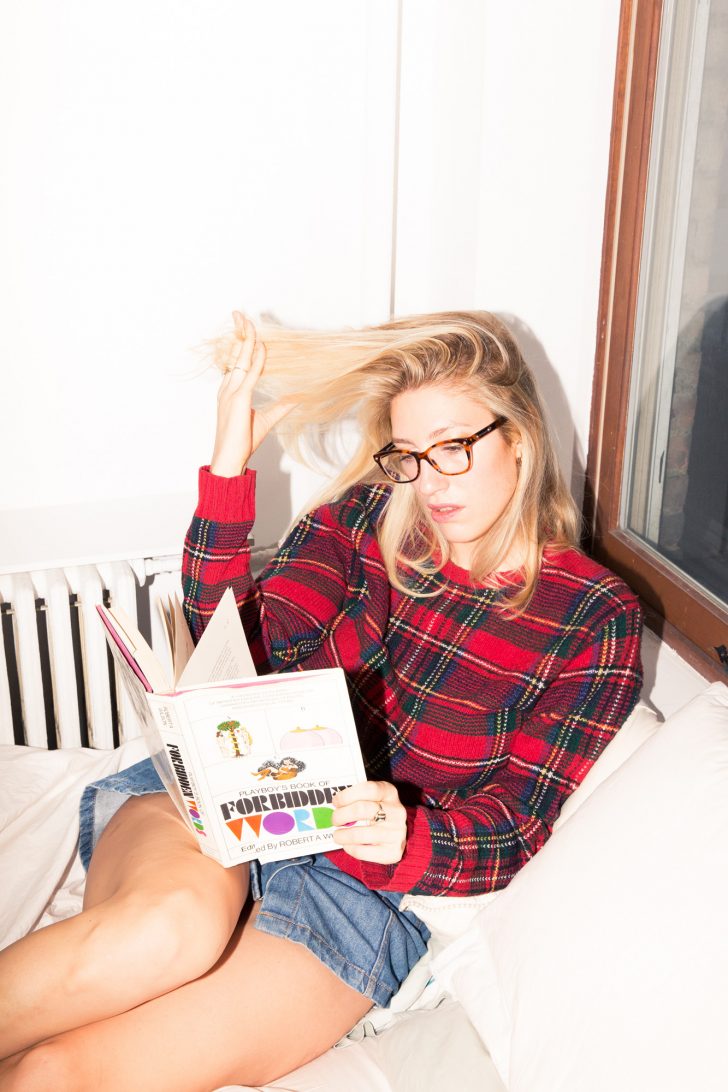 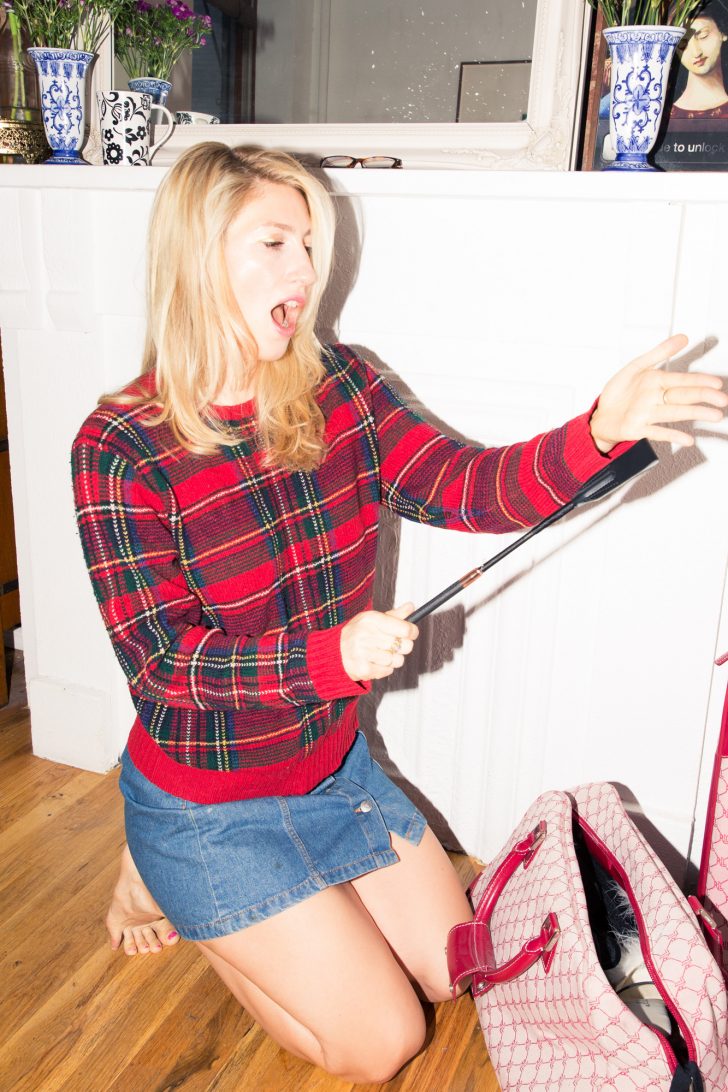 Why her work is feminist:

“It’s something that I’ve gone back and forth on over time: if you asked me that a few years ago I would have said, ‘Yes, of course I’m a feminist.’ Slutever is a feminist website; it’s a website about sexuality written by a feminist. But I’ve actually changed my perspective on that. I think feminism is having a resurgence in recent years; we live in this exhilarating time where it’s exciting to be writing about sexuality, identity and feminist politics, because there are so many young people with new perspectives on identity when it comes to gender and sexual orientation. We are starting to understand in a massive way that sexuality and gender are fluid, which is something that, four years ago, was not in the cultural conversation at all. It feels like issues around gender, identity politics and sexuality have leapt to the forefront of the cultural conversation really quickly. I’m really proud to run a website that has feminist perspective.

“This show, however, is not necessarily as rooted in feminism as the website, because we really did want to make something that was for both a male and female audience. Not that men aren’t interested in feminism, but we didn’t want to pigeonhole ourselves at all. Initially, when we were concepting the idea, we were like, ‘Should it be a show about sexuality from a female perspective? Should it be about female sexuality?’ And then we were like, ‘No, why would we create any borders?’ It’s pretty evenly about both men and women, and what's interesting about making a documentary series is that with video, humanizing and creating an emotional connection with the subject is a lot easier than with writing. In writing, the format is great for expressing ideas and opinion, but what this series is intended to do is not to necessarily put forth an opinion, but just to shine a different light. As someone who writes essays all the time, sometimes I get so sick of my opinion. It’s actually nice to not have to say what I think, just to interview people and look into these new worlds.” 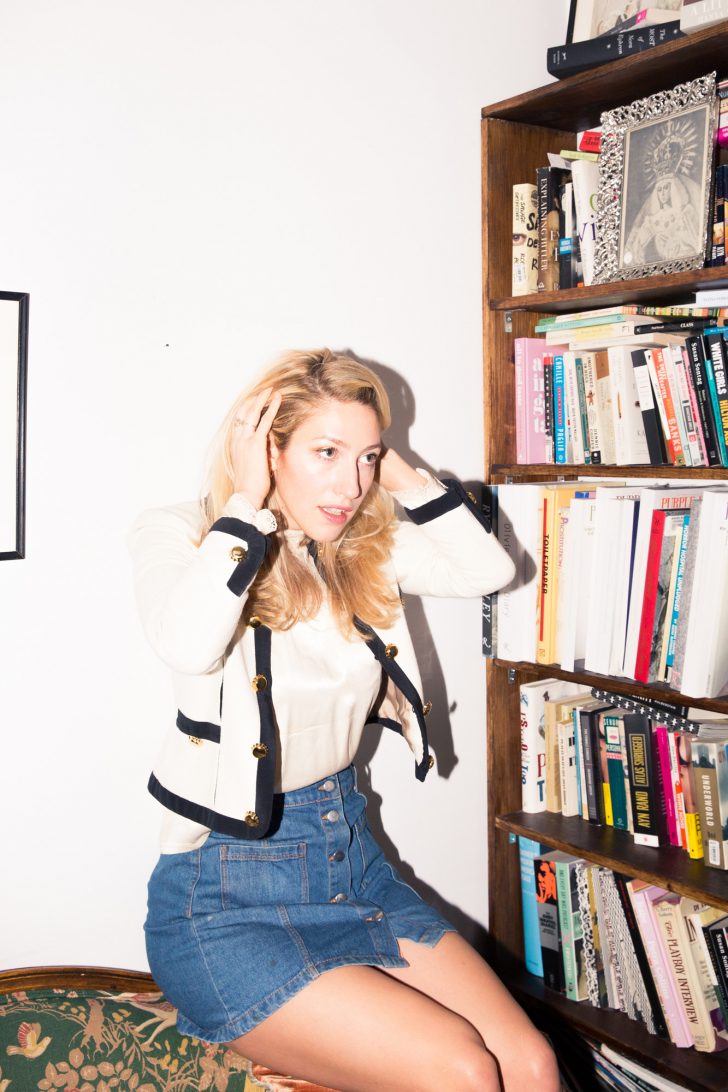 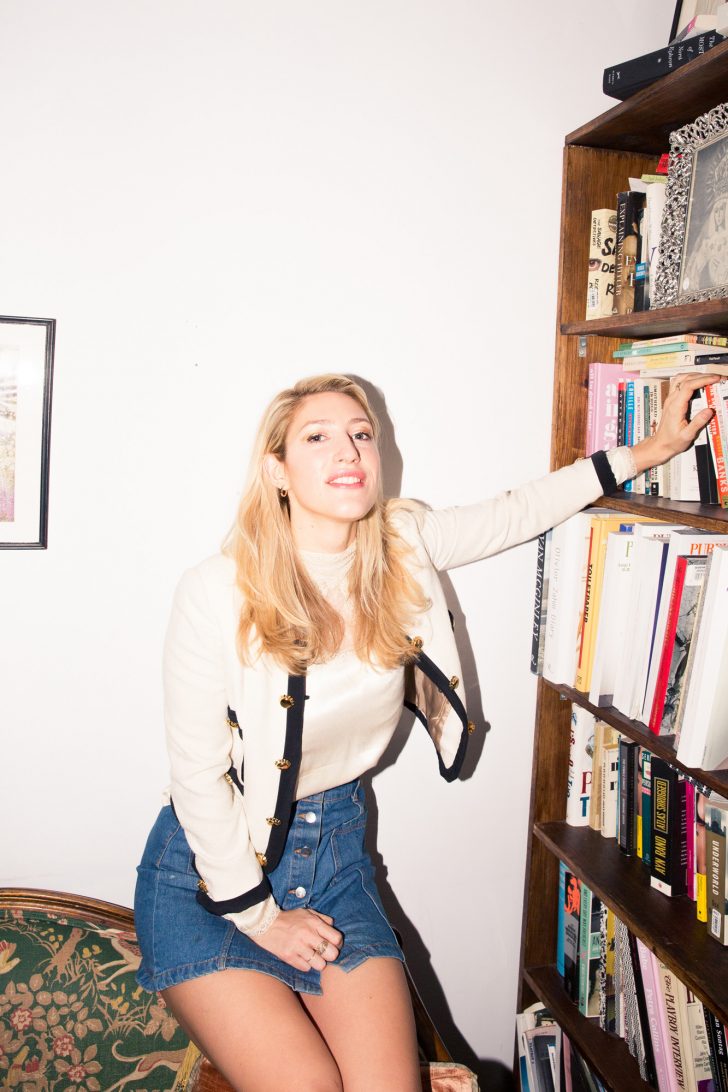 Why, in this case, mainstream is more useful than niche:

“I want the series to be mainstream in that I want to reach a wide audience. There’s only so much you’re going to accomplish when preaching to the choir, which is another reason that I wanted to move away from this feminist idea. If the audience is a group of sexually progressive feminists, you’re not going to be opening anyone’s eyes.”

What she plans to explore next on Slutever:

“I find myself naturally drawn to people who work within the sex industry and humanizing them. I’m interested in looking at countries where the laws around sex work are different and how that affects people. I would love to do something about relatable things that aren’t necessarily so rooted in sex, too— like dating. Monogamy is an issue that I find myself drawn to—as all of my friends are getting married and whether I’m ready to do that.”

How she sees her role on the show:

“I identify as a writer. But on the show I think I’m more of a journalist. I was looking at photos of Diane Sawyer a lot, but while we were filming, just thinking, what would Diane Sawyer wear? I would love to be the Diane Sawyer of sex and relationships—that would be the best thing I could be. That’s my goal.”