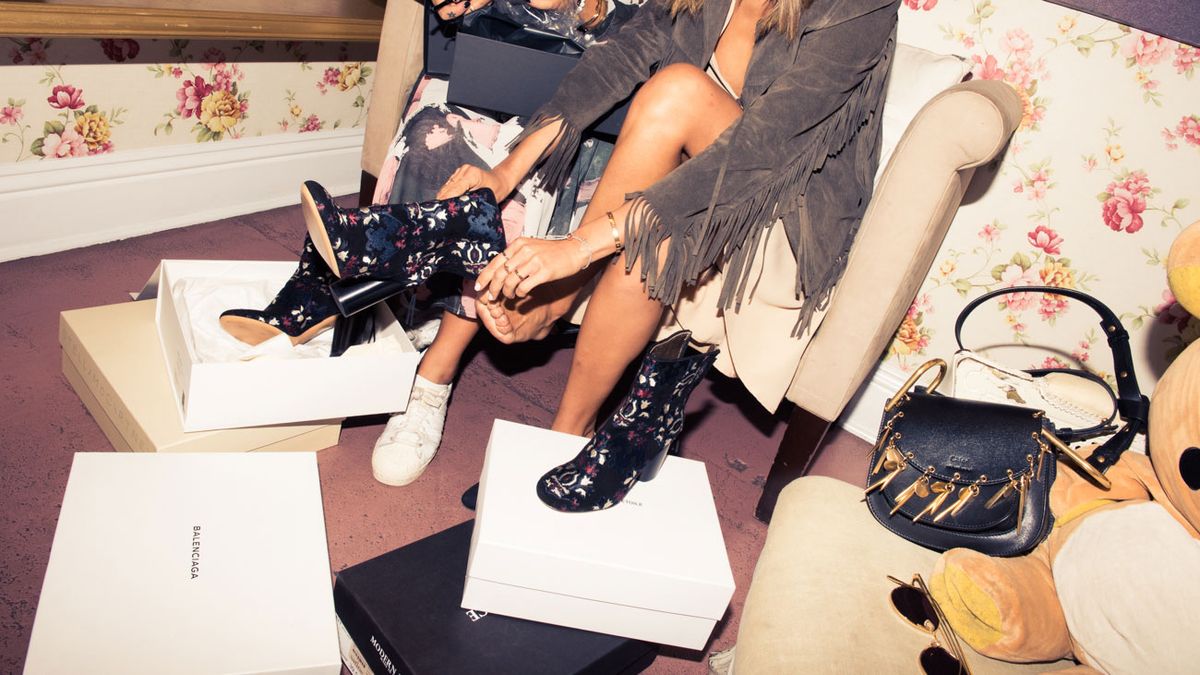 I Quit Shopping for a Month

Trust, for me, this is a big deal.

Remember when I said a few weeks ago that all the workout classes I do were seriously draining my bank account? While it’s true that I was spending cash willy-nilly on anything with a barre that promised me an improved “seat,” I think the real drain on my finances can be found in a heap at the bottom of my shoe closet.

I have so. much. stuff. and I love nothing more than adding to my “collection.” I have a bona-fide shopping problem, and it’s not cool.

Maybe you also remember when, in late September, I made a life-changing trip to St. Jude Children’s Research Hospital? I was, and am, completely floored by the work they’re doing, and so, inspired by what I saw, promised myself that I would abstain from shopping for the month of October, and come November, I would make a donation to St. Jude. And I did. And I feel...well...mostly the same.

I thought it would be hard to keep myself from nabbing another thing I didn’t really need during my nightly scrolls through Moda, Net-A-Porter, and MatchesFashion, and it was, but not really *that* hard. I realized how many of my purchases were pure impulse, and how little I actually appreciated the things I bought. I guess you could say I had a boredom-shaped hole in my heart and I was trying to fill it with Dries van Noten slip dresses, sparkly iPhone cases, vintage Levi’s from eBay, and lurex anything from Etsy. I know this makes me sound like a disgusting brat, but acceptance is the first step towards change, right?

I’ve never really been one to exercise restraint. When I want something, I have to have it or else I feel like I’ll explode. When I fall down an e-comm rabbit hole, I fall deep. When I get it into my head that I need a sequin jumpsuit, I’ll literally buy three from every vintage and consignment site I can think of. When I suddenly think *clogs!* I’ll get four pairs. I won’t say I’m a fashion hoarder, but I won’t say I’m not one, either. But forcing myself to sleep on purchases (for up to 31 days) made me just kind of chill a little bit.

And not to make this month-long experiment sound more life-changing than it was (because if I’m being honest, I relapsed almost as soon as I could), but forcing myself to take a step back and have a quiet mind about one aspect of my life makes it feel like it could be easier to do the same in all aspects. Which is *something* in an age where it seems as though literally everyone is plagued by crippling anxiety and an inability to just chill.

The other thing I found was that the thing(s) I bought last week when I could do some damage were things I actually love! They were things I thought about all month, and imagined all the ways I’d wear them, and I really feel like they could be wardrobe VIPs, rather than just filler—which sadly makes up 99 percent of my closet. I recently got a copy of Marie Kondo’s book as part of a press mailer and I haven’t been able to toss it (ironic, because it currently gives me exactly zero joy) but I think I might actually read it, and take a tiny baby step towards being a better, less wasteful person.

Finally, the very best part of this whole thing was making that St. Jude donation. I gave the max amount I can reasonably afford, and it could have gone towards a lot of shoes, but given that it takes 2.2 million dollars per day (seriously) to run the hospital, I can’t think of cash better spent. If you want to make a donation (literally everything helps!) you can do that right here.

So, in the end, will I change my ways? Maybe! But also maybe this is just part of who I am, and I’ll never have a savings account because I’ll only have bags and coats and sequin jumpsuits. But it is nice to know that even if only for a moment—or a month—it is possible to change.

And here, my top three tips for going on a shopping fast of your own, should you want to direct your funds and attention in a more positive direction too.

1. Use it as an opportunity to do something you care about.

For me, it was donating to St. Jude, but it could just as easily have been Planned Parenthood, or Know Your IX, which helps prevent sexual assault on college campuses. Both feel very appropriate in this moment, and could really use our support.

Not only will this help you make room in your space (which is not the point), you’ll come across so many great things you already own, but probably forgot about. The whole “shopping your closet” thing is real.

3. Keep a list of the things you want to buy.

If you write down a list, you can go over everything once you are able to make a purchase and do so wisely. I’m willing to bet that at least 40 percent of the things on your list won’t be compelling in the least anymore, which will hopefully help change your shopping habits down the road.