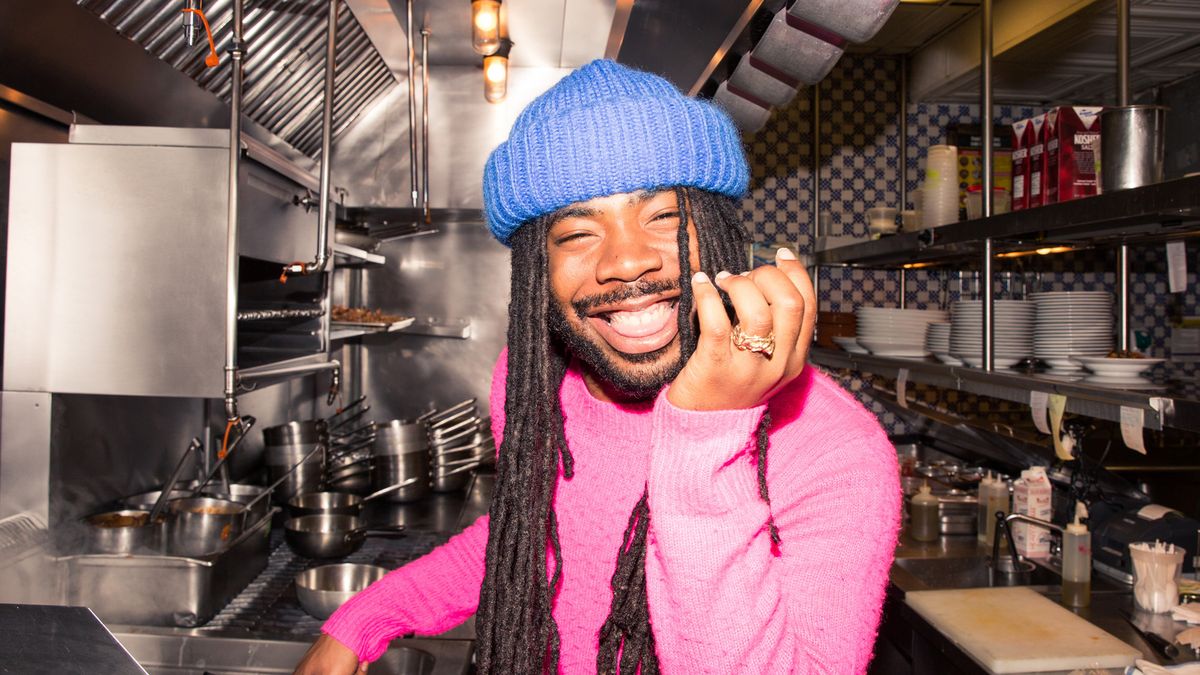 And talking about his debut album and puppy co-star.

Honestly, sometimes my job is so crazy I can’t even believe I get paid for this. Like when we invite rapper D.R.A.M. into the kitchen at Osteria Morini (one of our favorite neighborhood spots) to cook up a big bowl of tagliatelle and he actually says YES. Like, what? But it happened.

Italian is the hip-hop artist’s favorite food (what can we say, we do our research), which is how I conspired to sneak my way into his heart. And of course, by talking about his debut album Big Baby D.R.A.M. and cover art co-starring his pet goldendoodle, Idnit. Once he tossed and plated his big bowl of tagliatelle, we discussed his (what seems like) overnight success with single “Broccoli,” the importance of authenticity in the music industry, and, of course, his specialty dish. For the rest, you’ll just have to keep reading to find out.

Coveteur: “Tell me about the dog you put on the cover of Big Baby D.R.A.M.?”

D: “It was an inspiration from Cam’ron’s Come Home With Me album cover, where he’s holding his baby. Because when I hold Idnit, he wraps his paws around me, so I just thought it would be cool for a profile picture. When the photographers sent us back options from the shoot, there was one where it was zoomed on us and we said, ‘That’s the money shot.’ My dog is just like me—he’s looking at me, looking at him. It’s kind of crazy, we act a lot alike.”

D: “It’s just something [people have called me] over the years. You know, it’s low-key; something like I get away with murder, quote unquote, skip the line at the airport and shit like that.”

C: (Laughing) “I thought it was because you were sensitive.”

C: “What was the inspiration for your debut album?”

D: “It’s the same goal. The name says it all, ‘Does Real Ass Music.’ I just wanted to build a vibe that was true to me, and that would accompany all my moods. All the while, having a feel-good vibe.”

C: “What about working with Lil Yachty on ‘Broccoli’? It’s everywhere.”

D: “It was dope, I mean, we didn’t expect it to happen like that. I saw he was in L.A., I hit him up and he came through. We had a vibe going, he lay down a verse, and three days later we dropped it on Soundcloud. As soon as we were done with it we let it out there. We didn’t even know it was going to be what it ended up turning out to be.”

C: “Have things changed since then?”

D: “Of course, hell yeah. I’m constantly on the road. It’s the most successful I’ve ever been in my life.”

C: “Anything crazy happen on tour?”

D: “I mean, people actually throw stalks of broccoli on stage at some of the shows. Especially the college shows—they go and ransack the cafeteria and steal mad broccoli and just throw it onstage.”

D: “Raw. Then when it’s onstage, they be like, ‘Yo!’ and waving at me. At one college, I picked one up and put it in the air. They went crazy, they already knew what time it was. So that’s the craziest shit really, throwing broccoli onstage. Not in a way of disrespect, it’s like throwing roses.”

C: “Do you put anything crazy on your rider?”

D: “I don’t really… People tell me I need to get a little more creative with my rider. I mean I always have gummy bears. Oh, key thing: all vocalists, make sure you have hot water and tea on hand. I like throat coat and ginger: a mixture. I’m always drinking tea with honey.”