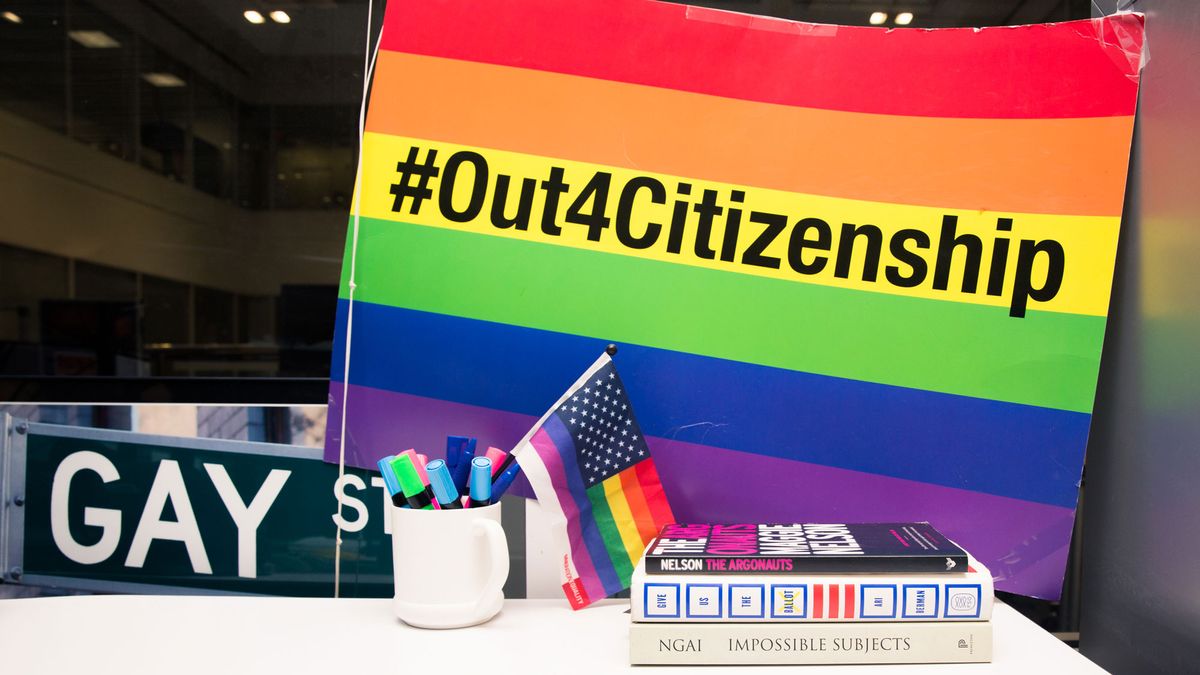 This Activist is Putting LBGTQ Rights in the Spotlight

The current political climate (read: the election) can really get you down, can’t it? Or, as Sejal Singh put it when we visited her at her office at the Center of American Progress (CAP), a vice presidential candidate who’s anti-LGBTQ and a presidential candidate who, well, we won’t try to list what he’s done, can make you feel “cynical”. But, as we’ve learned from the likes of Carmen Berkley and Jenn Brown, there’s a lot of great, real work getting done in D.C.—including the work of Singh herself. As the communications and campaign manager for CAP’s LGBTQ team, she’s responsible for shining a light on rights violations, movements and policies that affect the LGBTQ community. If it sounds like hard work, it is. And Singh is the first to admit that it sometimes feels like she’s only just treading water. That said, she is extraordinarily passionate, and believes that there are enough other passionate people (namely, us millennials) and people who, if informed, just want the right things—then the change will happen. Read this interview and we promise you’ll catch the passion too.

How she became involved in working for LGBTQ rights:

“Before I worked at CAP, I was working in New York in state and local government, and for a non-profit called Know Your IX, working against gender based violence, like sexual assaults and domestic violence, on college campuses. In the work that I was doing, I was drawn to words; talking about the ways that all of these issues, whether that’s access to health care or homelessness or domestic violence, affect LGBTQ people. That’s partly because we have to talk about the ways that LGBTQ people are affected by these problems, or we’re never going to solve them. But also because I’m both personally and professionally invested in this movement. As a young queer person, this is a really exciting time to do this work because we’re seeing unprecedented progress, but at the same time, we’re seeing incredible backlash. It’s scary, but I know that right now the place for me to be is on the frontlines fighting for my rights and the rights of my community.

“I’ve wanted to do social justice work for a very long time. I have seen firsthand the ways that LGBTQ people like myself and people who are most important to me face employment discrimination, higher rates of sexual and domestic violence, lack of access to health care—and I just think it’s unacceptable that we can live in a world where brilliant, caring people are discriminated against just because of who they love. A world where that doesn’t happen is within our reach if we do everything we can to create it, so how can I not want to do this work? Our rights are at stake.”

What her role as communications and campaign manager entails:

“My role involves a lot of communication and also developing the strategy and messages to show people what the real impact of anti-LGBTQ laws are. The most important thing I can do here is show people what I saw when I was just a college student who was realizing how much and how far we have to go before LGBTQ people are equal. It’s about showing people the real-life impact that policies like Religious Freedom Restoration Acts have [on real people]. A series of bills have been introduced in states all across the country, most notably in Indiana and Mississippi, where they pass extremely overboard RFRA’s that essentially allow people to discriminate against LGBTQ people, and also against women who use contraception. They would allow employers to fire someone because they didn't follow the same religious tenets.

“It’s easy for people to think in the abstract that religious freedom is important, and it certainly is, but it doesn’t give you the right to discriminate. It’s easy to forget that there are real people who are losing their jobs, or who aren’t able to get housing, or who are humiliated in public spaces because they can’t use the bathroom. You can see the tangible impact this work can have with people in your own community. If I can help people elevate their stories, so that policy makers see that there are real people whose lives can be made so much better, who can feel safe walking around in public spaces, can marry their partners without fearing that they’re going to lose their job, and who can take their kids to pre-k without fearing that they’ll be turned away the way that some lesbian mothers are turned away—if I can tell people those stories and I can help them elevate their voices to a national stage, then I’ll have done my job.”

The challenges of her job:

“The LGBTQ rights movement spans every single issue there is: we need LGBTQ equality in civil rights. We need comprehensive non-discrimination, but we also need LGBTQ equality in immigration and LGBTQ equality in health, LGBTQ equality in the criminal justice system. We therefore need to be experts in all of those areas—it’s all hands on deck, all the time. I have amazing colleagues who bring expertise in all of these issues—at CAP we push bold policy ideas for a better world. I have a colleague who does some of the best LGBTQ immigration work in the country, and my job is to elevate that and make sure that everybody knows about the problems that she’s highlighting, and the research that she’s done—if people knew about it, it would change hearts and minds, and it would change policy.

“There are days where it feels like we are just barely treading water because there are bathroom bills in states all across the country that are based on nothing more than transphobic myths; there are people who try to sneak discriminatory legislation into federal, state and local bills; there are hate crimes against LGBTQ people—especially violence against trans women. Sometimes it’s difficult not to feel under siege. In moments like that, I look at our history and think about how far we’ve come. I really do believe that, as Dr. King said, ‘The moral arc of the universe bends towards justice.’ I don't think it’s a truism—I think it bends towards justice because people who care about equality and justice work very hard to ensure that the future is better; that we leave behind a world that is better than the one that we came into. I believe in the power of progressive ideas. I believe that people ultimately will support equality, and that we just have to keep fighting. That means we’re going to play a lot of defense, but we will win.”

Why people who say millennials are apathetic are wrong:

“I could not disagree more. I have seen young people in this country who are changing the American political landscape in ways that are revolutionary. Young people are leading the LGBTQ rights movement; young people are leading activism on college campuses, and with regards to sexual assault they’ve changed the way that people in this country think about sexual harassment and violence. Young people are leading the Black Lives Matter movement that has completely upended the conventional wisdom about what we can do for racial justice and criminal justice—Black Lives Matter activists have created a reality in which there’s bipartisan consensus around racial violence reform. They have unseated district attorneys who unfairly prosecute people of color, they have transformed the democratic platform, and they are just getting started. I think that young people are leading incredible social movements and they’re the leading lights. I think everybody should be getting an award. But, of course, I’m a young person so I’m a little biased.

“I’m really excited to see millennials at this age where they are influencing policy and running for office because our generation is the most pro-equality generation there is. Our generation supports reproductive rights and criminal justice reform, and the more that our voices are heard, the more we can change this country.”

“Looking around the political landscape, it’s very easy to feel deeply cynical, but I try to be optimistic. It’s hard looking at this election, where a vice presidential nominee is one of the most anti-LGBTQ governors in the country and where the presidential nominee started his campaign with a racist conspiracy theory about Barack Obama’s heritage, and then called Mexicans rapists, called for expansion of stop-and-frisk that targets minorities and is unconstitutional, who has a history of sexual harassment… It is horrifying to me that we’re at a place in this country where 40 percent of the American electorates supports this ticket. It’s very easy to look at this campaign and feel cynical, but what does give me hope is the youth movements that are transforming America. The way that Donald Trump talks about the women who he sexually harassed is horrifying, but I have been heartened by the fact that so many people recognize exactly how horrifying his rhetoric is. 10 or 15 years ago he could have said, ‘It's just locker room talk,’ and most people would probably agree with him. I think we’ve seen a watershed moment in this country in the way that we talk about sexual harassment, and that is equally true for LGBTQ rights.

“We’re at a place where 70 percent of Americans support comprehensive non-discrimination for LGBTQ people. It’s true for racial justice, it’s true for immigration reform. I see that young people are the leading voices on these issues and as we continue to make our voices heard, as we begin to be in positions of power, I do believe that we will move in a better direction. Are we there yet? No. But are we moving on the right path? I believe that young people can make that happen. We’re at a moment where, as a country, we are able to look at Trump’s rhetoric and reckon with the fact that there are a lot of people who say those kinds of things. We have an opportunity to reckon with that reality and figure out how to do better going forward.”

How to believe in yourself as an activist:

“The first thing is to remember that your voice is really valuable. I think it’s very easy for young people, but especially young people of color, young women, young queer people, or people who, like me, are all of those things, to feel that the world doesn’t value what they have to say. As a young woman of color or a young queer woman, we know what we need better than anybody else—you should be confident that you are an expert on your own experience. The other piece of this is to build a supportive community. I know that if I had to do this work by myself, I probably won’t be able to do it. It can be really hard, but if you have people who love you and support you and who are doing the work with you, then it’s sustainable.”

2016 Election Politics
Part of the series: