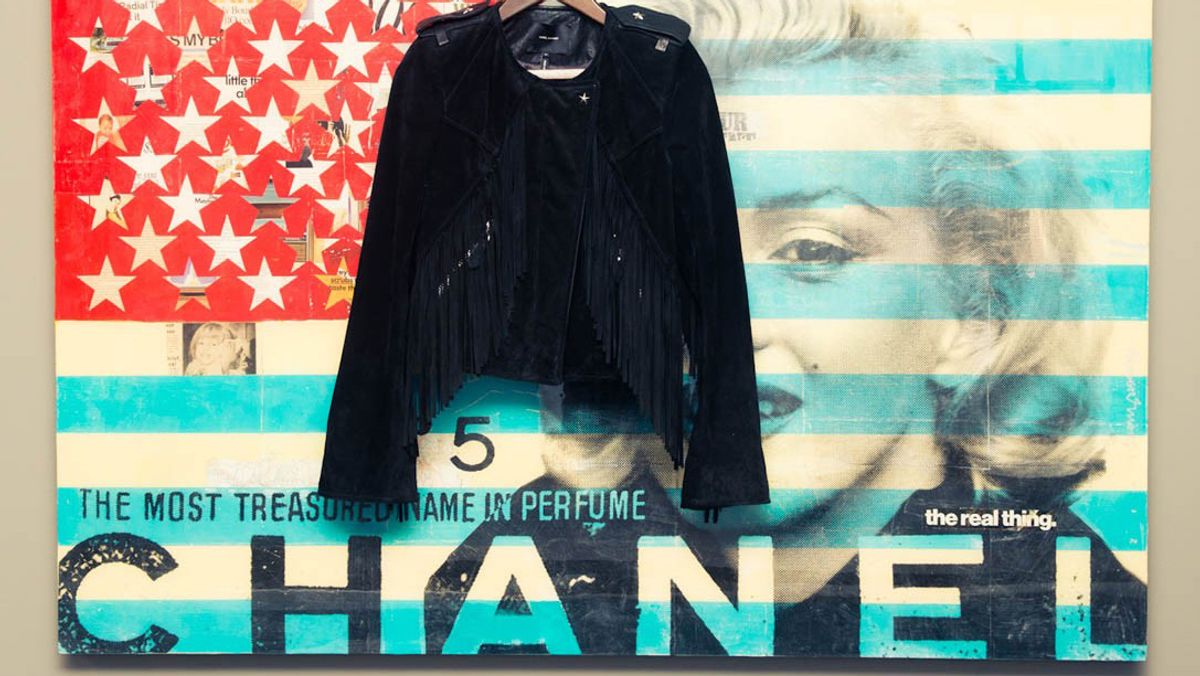 Sharon Ainsberg goes all in on why all Americans must vote.

Presenting: the latest dispatch from Sharon Ainsberg, the fabulous co-founder of SHO+CO, a boutique bi-coastal agency that focuses on celebrity and influencer initiatives. In case you missed it, she last shared her tips for managing stress, and this month she’s laying out all the reasons all Americans who are able should vote, and why she’s voting for HRC. If you’re feeling some pre-election stress, please see her last column.

I’ll begin by saying that what I write does not reflect the POV of Coveteur—they’re just progressive thinkers who give me license to spew (and please note, I WILL be spewing) because, after all, it’s my First Amendment right, right?

We visit this site primarily because we love all things fashion. So let me tell you the most fashionable thing you can do this month: VOTE. If you’re an American and you recognize your good fortune in having the right to vote, suit up in your most bad-ass threads and let Tuesday, November 8th be your most fashionable day all year. You can find everything you need to know about voting right here—come November 8th, your number-one mission is to know your site and get to the polls.

Now, I’m not going to pussyfoot around the issues. (The P word is my new favorite word since The New York Times printed it for the first time in the paper’s history. I plan to use it, in full, freely.)

Naturally you can vote for whomever you want and I have to respect it because I respect our process. But if I can just take this one shot to make even a tiny dent in your psyche with some semblance of reason, allow me to go there. You may not like it, being that we’ve established in previous posts that I’m pretty mouthy.

Here are just a couple of key reasons why I am voting for HRC to become our next Commander-in-Chief:

We need future generations of young women not only to believe, but to witness and experience by example that they can reach their highest goals, work hard, fight hard and gain the ultimate positions of power, leadership and global influence (that which is equal to men). This includes becoming our next Commander-in-Chief.

We need to keep this reality TV, hair-flippin’, lyin’, snifflin’, cheatin’, pussy-grabbin’, delusional, xenophobic, misogynistic, narcissistic mogul FAR AWAY from taking command of the most powerful office on the planet (as well as the nuclear codes) and becoming our next Commander-in-Chief. This is imperative and actually urgent.

All politicians lie or massage truths, right? I feel like we can safely call that a given. So here is a good comparison chart for you from Politifact: HRC has a 69% rating of true statements versus TOM’s 13%. She has a Mostly True statement rating of 76% by comparison with TOM’s 34%. And the Pulitzer-prize winning research team at Politifact has actually named HRC one of the most honest political candidates to run in decades. Now, to be fair, these folks at Politifact don’t forfeit sleep and food buried under thousands of hours of research for nothing. They have in fact meticulously dedicated their lives to fact-checking things like the reliability and honesty of candidates who are aiming to become our next Commander-in-Chief.

HRC can take anything you throw at her.

Any woman who can take the kind of daily beating HRC has withstood in this election due to entirely sexist standards (Strong+Outspoken+HasAPussy=BITCH), rhetorical character assassinations and accusations of criminal acts (still with zero evidential support) is the woman with the kind of thick skin, commitment and resilience I want to see as our next Commander-in-Chief. Because, let’s face it, Obama’s hair went gray in about the first four months of this gig and I think Hill’s blond dye job is still looking pretty fucking spectacular.

She’s actually prepared for the job.

HRC’s preparedness for the presidency includes 30 years of public service and a towering list of both national and international achievements. Did you know that as FLOTUS, HRC visited and spoke with world leaders in 79 countries? She was also the first FLOTUS to ever win a public seat in office when she was elected to senate. Is she perfect? Not a sliver of a chance in hell. Has she caused some wreckage? Duh. She’s a politician. But she has also been the arbiter of movements and government regulations fighting to protect American families, war-torn countries, women, children, immigrants, students, veterans, 9/11 first responders, people without health care, climate change policies, the economy and jobs. Life as a public servant is her calling and becoming our next Commander-in-Chief is nothing short of her second nature. So now let’s take a look at TOM and see what he’s been up to.

Some of his notable “movements” and “achievements” include a real estate empire worth billions (built in part by stiffing working-class contractors and having biased rental practices), a hit reality show which never won an Emmy (because, as he claims, the Emmys are rigged), calling Mexicans rapists while simultaneously manufacturing suits bearing a “Made in Mexico” label (“Bad Hombres” would actually be a great name for his menswear line), referring to his own daughter as a “hot piece of ass” on national radio, having 11 documented accusations of sexual misconduct, assault or abuse, identifying a beautiful 10-year-old girl as someone he’d “be dating in 10 years,” mocking a disabled reporter, bastardizing our democracy by refusing to concede if he loses (because, as he claims, the election is also rigged), inciting hatred against Muslims, winning the early endorsement of the most influential white supremacist leader in our country, and all in all, boasting to (the now unemployed) Billy Bush that he’s famous enough to grab some pussy whenever he damn well pleases. I mean, naturally he’s a clear choice to become our next Commander-in-Chief. Which begs the question: Are we having a psychotic break? I mean…like…as a country? Seriously.

I may not be famous, but I’m gonna grab myself some presidential pussy on election day anyway. And I’ll be suiting up to honor my girl HRC, and hopefully you’ll be inspired to do the same. Here, here, here, here, and here are just a few of my favorite stylish ladies rocking killer pantsuits that make me want to seriously bring out my inner Power Bitch. And if a suit just isn’t your thing, then this Rebecca Minkoff/America Ferrera tee I helped develop with my pal Carrie Byalick is pretty rad and a portion of the proceeds go to Rock the Vote!

I would like to dedicate my November column to an inspiring woman and thought leader, my friend, Victoria Cook.