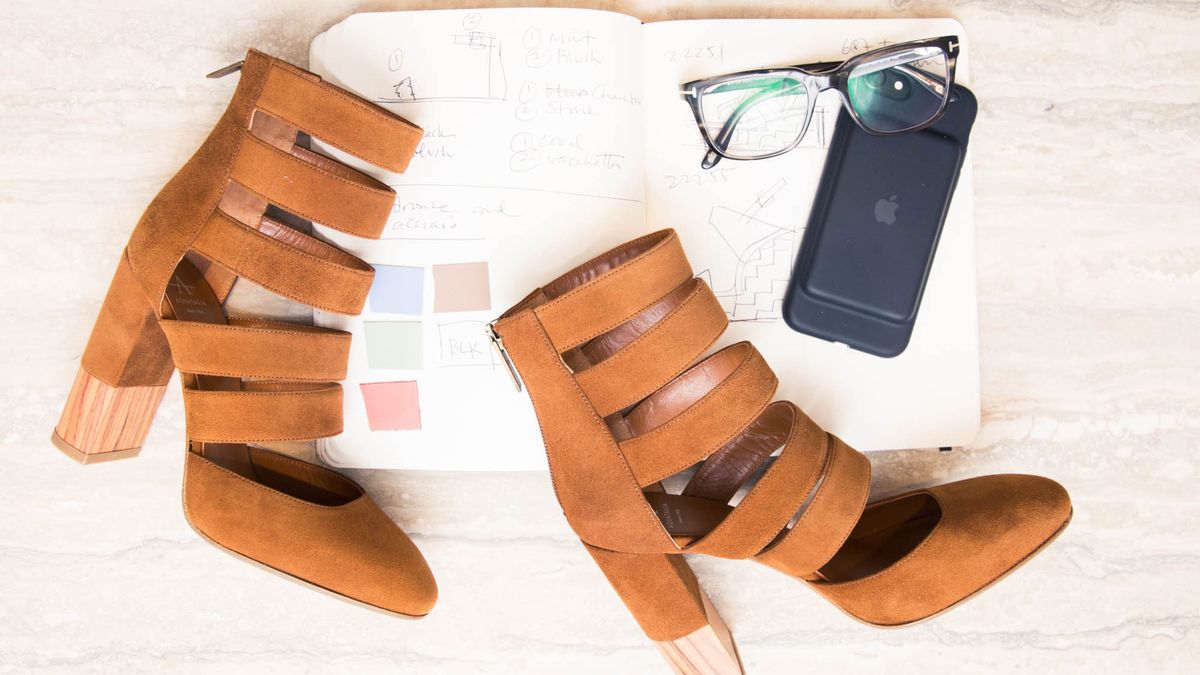 Creative Director Edmundo Castillo is making feel-good shoes that are high fashion, too. In collaboration with Aquatalia.

Edmundo Castillo has an obsession that we can understand: shoes. And like us, he’s been obsessed since childhood. Unlike us, with encouragement from legendary fashion illustrator Antonio Lopez, Castillo pursued the career path, came to New York, designed shoes for a host of high fashion designer houses (as well as having his own namesake line), and last year, was hired by Aquatalia, the Italian accessories label known for super high-quality, weatherproof footwear. Something tells us the brand, like us, understood Castillo’s passion and that he could bring a high fashion outlook to the brand. And as we discovered when we sat down with the Puerto Rican designer at Aquatalia’s new Madison Avenue store, he was just as excited about the label as they were to have him.

For Castillo, it’s always been about shoes:

“I grew up in a family of women that loved shoes. I’m the youngest of five and many female cousins. I can remember the shoe conversation in my house was very important. But you’re born with obsessions and you don’t understand how they came to be. I was also very picky about my shoes from the time I was in kindergarten. The first thing that I wanted to wear were shoes. When it was time to buy the school uniform shoes, I would drive my mother insane because I didn’t like anything and I had in mind what I wanted—the shoes were what was going to make the uniform beautiful or boring. [When I found what I wanted] I was so happy and every morning I felt like I was dressed.

“I never thought that I was going to become a shoe designer, but there was a Converse shoe factory in Puerto Rico. It was on the way to the beach and the factory was a landmark point that I knew was halfway. There were always all these shoes in my life, and one day I figured out that I could design shoes and do it forever.”

How Antonio Lopez helped him realize his abilities as a shoe designer:

“I was going to be a pilot, but then a dear friend was getting married and she asked me to do the calligraphy on the wedding invitation envelopes. I didn’t know how to do calligraphy. I was in high school still and she bought a kit of calligraphy and asked me to learn. I did and when we finished the invitations she said to me, ‘You are a creative person, you’re an artist, you should go to art school.’ Suddenly, the idea of going to aeronautical school felt wrong.

“I still didn’t know it was going to be shoes—I thought I was going to be a fashion illustrator. I met Antonio Lopez and we became friends—he was from Puerto Rico, too. He took me under his wing and I learned to draw from him. I was going to school in the Dominican Republic where he had a workshop. I knew that I didn’t want to do fashion design because I felt that I couldn’t have endless ideas with clothes in the same way that my friends did. One day Antonio did a second workshop and we were doing an ink exercise. I was really frustrated because when you’re doing illustration, there are days when it works, and the next day you can’t draw a stick figure. Antonio leaned over me and said, ‘Forget about fashion illustration, after me, fashion illustration is dead. You should be a shoe designer.’ That was it. It all made sense. I didn’t know how to draw a shoe, I never designed a shoe, but it made sense.”

How he ended up at Aquatalia—and how it represents the new career challenge that he needed:

“I’ve been designing shoes for almost twenty-seven years and I’ve been through several brands where I had to focus on the same type of shoe that I been doing from the beginning. I was doing many things, but it was always a sexy, refined shoe. Two years ago I went into a midlife crisis where I felt I needed a new challenge—I was almost falling out of love with my career; anything I drew felt like someone else’s shoe. I had a big problem with the platform moment; I cannot do a peep toe—I just couldn’t do it. Then Jimmy [Gabriel, president of Global Brands,] called me and I started exploring what Aquatalia was and what could be.

“It’s the perfect shoe for the way we live today. And the weatherproof thing I thought was genius—the fact that they’re all shoes to live in, to wear, to feel great in. I felt excited again, in a way that I hadn’t felt before. It was a challenge and I want to put all of those things that I love about shoes into a shoe you could wear every day.”

The inspiration for his first collection (this one!):

“First, I look for color inspiration. I wanted to do shoes for girls in California. They go to the beach or they go to music festivals—they wear a flat, masculine shoe with a beautiful Virgin Suicides dress. Or the real Helmut Lang girl—that was something to grab onto. The high heel with the half wood was about getting those organic elements; this first collection is for a girl that doesn’t want to be in a pointy stiletto.”

His big plans for Aquatalia shoes:

“I see it evolving into beautiful silhouettes that are timeless. This isn’t about a trend—no, it’s just a great shoe. I want women to walk in here and go, I really like that shoe regardless of what the trend is, what the runways are showing, who the designer of the moment is. No, this is a great shoe and I want to have it in my closet forever.”