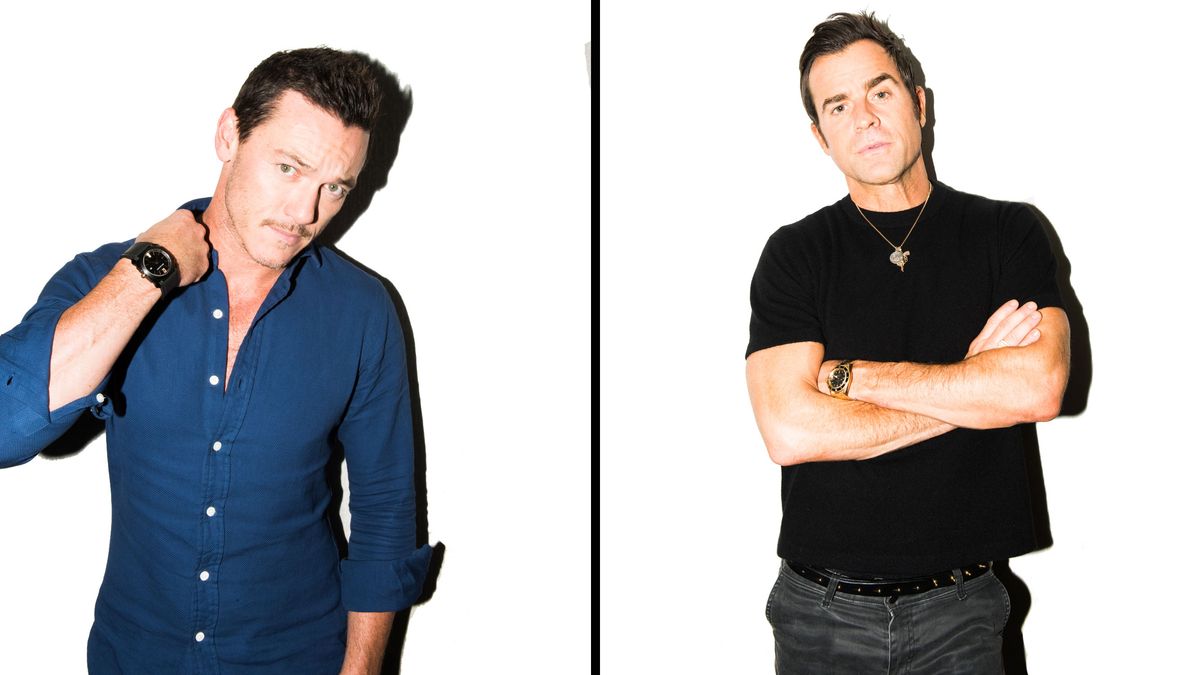 Like most people who read Paula Hawkins’ The Girl on the Train with the obsessiveness and speed of a hungover Friday Night Lights binge watching sesh, I’ve been patiently waiting for almost two years for the screen adaption of the psychological thriller. And like most fans, when I heard the cast announcements—Emily Blunt, Justin Theroux, Luke Evans—my excitement doubled.

But then I actually went and saw the film, and what followed was the epitome of scaries. TBH, I was blown away by how the film still managed to be frightening, even though I knew exactly what to expect at every twist and turn. It was all the perfect lead up to sitting down face-to-face with Justin Theroux and Luke Evans, a.k.a Tom and Scott, the following day to pick their brains about what it was like filming and unwinding from such dark characters (surprisingly, there were a lot of giggles on set). Per usual, we went a little off track and ended up hearing about that one time that Justin got really, really sick on a train in China and that Luke likes Kit Kats and vodka.

Coveteur: I saw the movie last night, I didn't sleep last night. So thanks for that.

Justin Theroux: You sure it was from the movie?

C: Yeah, your character in particular I think.

C: Really? It was a great film. You scared the crap out of me.

C: How did you unwind when you left set after playing a dark character for so long?

JT: I'm pretty good about not taking stuff home. I'm not method at all. We actually had a lot of fun on set. I’m good friends with Em [Blunt] so we were just overjoyed that we were going get to work together finally. We laughed a lot, shockingly. Between set-ups obviously, not during takes.

C: There's no laughing in this film.

JT: Yeah, there's no laughing... We had a lot of giggles on set, but weirdly enough, even on other things that I work on that are dark, there's something cathartic about doing horrible things or emotional things where you get to exercise whatever the dark thing you're doing is. You could sometimes leave the day feeling slightly better than when you arrived [laughs]. You know what I mean? You know, bash someone's head in for 12 hours and then you're like, ‘Yeah that's out of my system’.

C: Just dragging a body through the woods.

C: What's something really charming about yourself people should know after seeing you in this light?

I think we all realize [the film] is pretend, so I'm not, or I'd hope I'm not, as awful as this character I play. But I think the best message is to realize that I'm not a total creep. Best anecdote for playing a horrible guy.

C: Did you read the book beforehand?

C: What do you think was a turning point for [your character] Tom when he shows his true colors?

JT: You know, he's not a traditional villain in that sense. I think he shows his true colors when you learn from the perspective of Emily’s character Rachel. Her false memories of him are that he's a great guy and she's a horrible person for subjecting him to being drunk at parties. It's more about how it's structured, that is when he turns, when you realize he essentially supplanted her memories into her blackouts. But on face value he also did cheat on his wife to be with this other woman, subsequently cheated on her to be with a babysitter and then did this other horrible thing.

C: Let's do some quick fire are you ready?

C: Do you remember the first movie that scared you?

C: Wait, you get a hot dog on the train?

JT: On the Amtrak, yeah.

JT: I had a horrible and memorable train ride in China once. It was a really overcrowded overnight train from Beijing to Shanghai and I got super bad food poisoning within about an hour of leaving the station.

JT: No [laughs]. I wish I had a hot dog! I probably ate a pickled egg or something. And I spent the entire night throwing up with a thousand people around me, which was not fun.

JT: No, it was not a good look. I had no fans on that train ride.

C: No one was asking for your autograph?

C: No fan selfies on that one?

JT: No! I think this was a while ago, it was pre-selfies. Remember that?

C: I saw the film last night and it was frightening.

C: So scary. I didn't sleep after.

LE: It's very thought provoking isn't it? It sort of touches on a lot of human emotions that we've all experienced in different forms.

LE: It was really, really fun. I mean a lot of the reason why I took the job was because of Emily Blunt. I really wanted to work with Emily—I love her, I think she's brilliant.

C: It's such a dark movie, but on set I hear you guys were having fun.

LE: Yeah, once you've done a few heavy duty films you learn the tools to jump in and jump back out of it. You don't really want to stay in that miserable place all day.

C: How do you decompress when you leave for the day?

LE: I’d go to the gym, have a nice dinner with friends, sleep, meditate. Sleep is a good one because I don't get much of that.

C: Did you read the book before filming?

LE: No, I didn't read the book until after I’d read the script. I knew of it, but I honestly don't really read that much.

C: When did you realize the turning point in the plot? Because there’s a lot of suspicion surrounding your character Scott.

LE: I don’t remember. It's funny, when you're reading a script, especially when you're reading a script very aware of the role that you're playing and you’re looking for your own character when you read it the first time, it's very selfish. It was quite far in because I thought [the villain] was Rachel for ages. The film makes you feel that way for quite a long period of time as well. But it’s a really good story—a proper psychological thriller.

C: Did you play at all into people thinking it was your character, Scott?

L: I remember [director] Tate [Taylor] asking me to play up the temper a little more, so we added a scene where Rachel comes in and then he chases her into the kitchen. That was just a small little thing we wanted to add to it. You want the audience not to be able to decide too quickly who they think the killer is. The thing with Scott is that it's quite ambiguous: you don't know whether he could be the killer or the victim. He is a victim at the end of a film—you realize he loses everything and he's been deceived and lied to by almost everybody in the film.

C: I think a lot of people think the worst of your character.

LE: I’ll tell you what, as a murderer, [Scott] tells a bloody good story doesn't he? If he was the murderer, it's a really good performance for somebody—I'd be shit. You'd know it was me within two minutes [laughs]!

C: At times the viewer might see your character as jealous and controlling…

LE: Well, he is all those things. I think what people miss when I've been talking to them is that they think he's a bully, possessive, and jealous, but [Megan] didn't really give him any reason to not feel those things. I mean, she was cheating on him, there were obviously problems in their relationship and if somebody's like that with their partner, their partner is going to start feeling very insecure, vulnerable, and paranoid about everything. And I'm not saying you should ever check your partner's emails, but you get to that point where you know there is something wrong. [Megan] was playing into it in a way; she's very destructive in nature, really. Her personality was self destructive as well as destroying everything that was good in her life around her.

LE: Weirdly, it was The Elephant Man. I don't know why… well. I do know why! I remember I was about nine. Some moments in that film are so terrifying, how they treated him. That was a scary one. And then I remember Silence of the Lambs when I was about thirteen. I shouldn't have watched it but I did and it was amazing.

LE: The one I've done the most is the trip from Cardiff, [in Wales] to London for many, many years. I used to catch that train to London for two hours. Through one country, into another. It’s very special.