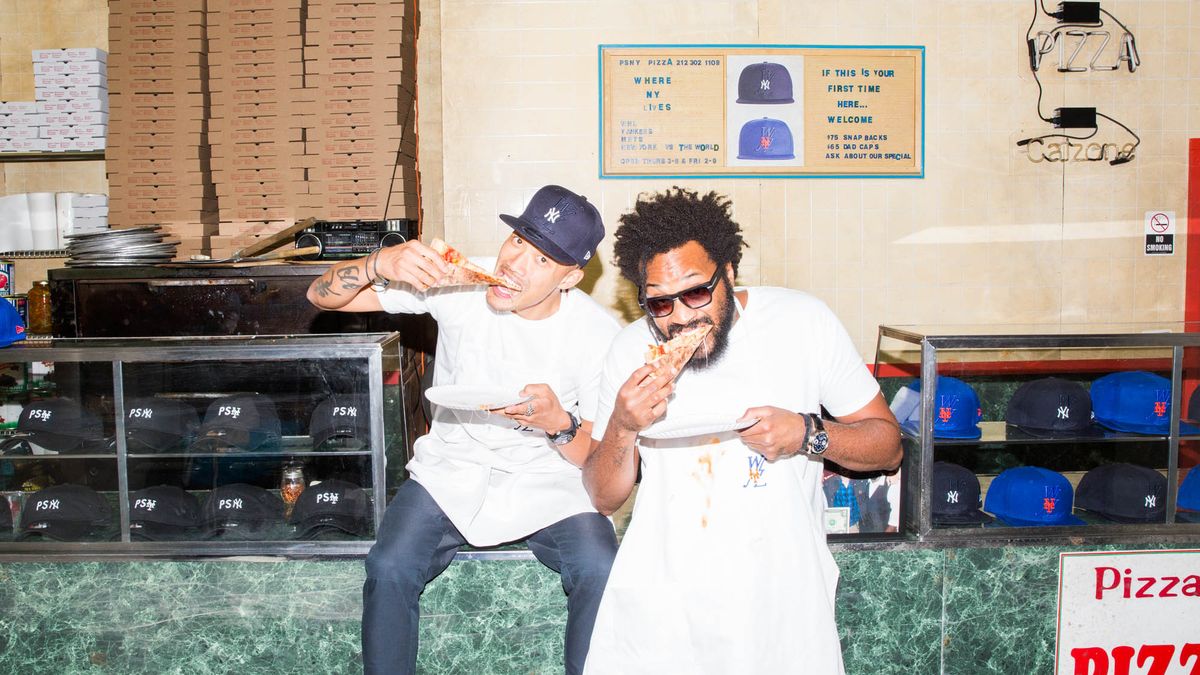 Dao-Yi Chow and Maxwell Osborne give us an exclusive tour of their new pop up.

When Dao-Yi Chow and Maxwell Osborne of Public School and DKNY ask you out for a slice, you go. You go just to get that high school, hanging out with the cool kids rush for the length of time it takes to inhale a slice of greasy New York pizza. If we’re being totally honest, though, sharing some ‘za with Dao and Max (as the cool kids know them) wasn’t exactly what we expected when we got an exclusive walk through of their two-day-only (!) pop up store for their new collaboration with New Era. Frankly, we expected the typical fashion pop up of empty gallery space hastily pulled together with racks of merch in the style of Kanye, for example, but that’s not exactly Public School’s style. Instead they retro-fitted a by-the-slice pizzeria next to the New Museum on Bowery and modeled it after Joe’s Pizza in which to serve up their Yankees and Mets hats today and tomorrow.

After giving us a tour of the shop, complete with pictures of celebrity “patrons” and a boombox circa 1983, we sat down over pizza (duh) and had Dao and Max divulge their favorite (permanent) pizza spots in the city, along with why the food is the best part about going to a ball game and how exactly one should layer toppings to get that perfect slice.

Max: “We’ve been working with New Era for a bit now—they’ve been making all of our hats. When the opportunity came for us to collaborate with them, and us being from New York— funny enough, liking two different teams—it was the perfect opportunity to have fun. I’m a Met fan and Dao’s a Yankees fan.”

Dao: “We’ve been die-hard, lifelong fans. I’ve been a Yankees fan since before I can remember.”

Coveteur: Is it a problem in your friendship?

Max: “It would be a problem if we were actually friends [laughs]. No, it’s not.”

Dao: “The Yankees suck right now and the Mets are obviously having a moment. At the end of the day, you root for the New York team. The Yankees aren’t making the playoffs this year. So I’ll root for the Mets because they’re a New York team. That’s really what the collab is about. It’s less about the teams and more about New York. If you’re from New York, obviously you’re either a Yankees fan or a Mets fan, but more importantly, anywhere you go in the world, if you wear that Yankees or Mets hat, everyone will know it and recognize it. It’s a symbol of New York. It’s a badge of honor.

“It’s the first time, the MLB has allowed anyone to play with the logos. The WNL is our ‘iconic’ logo—obviously we haven’t been around long enough to call it iconic—but when people see the WNL hat, they know what it is and that it’s Public School. Originally, our WNL hats stand for ‘We Need Leaders’ or ‘When Nobody’s Looking’, so we just adopted the Yankees and the Mets logos to be ‘Where New York Lives’.”

Coveteur: Do you watch baseball together?

Dao: “We went to the World Series last year.”

Coveteur: What’s your favorite thing about going to the games?

Max: “The food. Hot dogs. Any time you go to a sports game, calories don’t count. It’s like air. You’re allowed to have as many hot dogs or burgers as you want.”

Dao: “The dangerous part is we’re so busy handling the food that we almost got hit by a foul ball one time—we weren’t able to react in time because I had a pizza in my hand.”

Max: “You don’t want to drop the food, so we just let the ball go.”

Dao: “You let the ball hit you in the face. At least you keep your nachos.”

Coveteur: Let’s talk about food then. Why a pizza place?

Max: “What’s more New York than doing a pop up store out of a pizzeria. The pizza slice is so New York. It’s our favorite food. You can’t get it anywhere else in the world—pizza by the slice is New York. So when we did the pop up it had to be a pizzeria. There was no other place we could do it.”

Dao: “What native New Yorker doesn’t dream about owning their own pizza shop? If we weren’t designing, we’d have this. If this fashion thing doesn’t work out, we have the blueprint here…”

Coveteur: What are your favorite pizzerias in the city?

Max: “A slice is indicative of what New York is… You eat that on the go, it’s the New York Minute. But we also sit down and have some pizza.”

Coveteur: What’s on your perfect slice?

Max: “Pepperoni. For me a plain or pepperoni slice. I’m a purist when it comes to pizza.”

Max: “I do chilli flakes and parmesan. That’s it.”

Dao: “I would drink an iced tea Snapple.”

Max: “We’re going to have the event here and celebrate New York and the launch of this hat. We have a special performance…”

Dao: “It’s a very iconic New York group. Just like everything about this project, it has to be quintessentially New York. From the hats and the logos, which set the tone, [to the location], which we modeled this after Joe’s Pizza, our favorite pizza spot, and even down to the Nas campaign. Who else could be the face of this campaign other than Nas?”

Coveteur: Have you guys had pizza with Nas yet?

Dao: “We have not had pizza with Nas yet. We went to the Met Ball with Nas and had the opposite of pizza.”

The Public School x New Era limited edition collection will be sold exclusively from September 29-30 at the pop up shop at 231 Bowery in New York. The hats, which retail for $75.00, will also be available for a limited time online at publicschoolnyc.com.