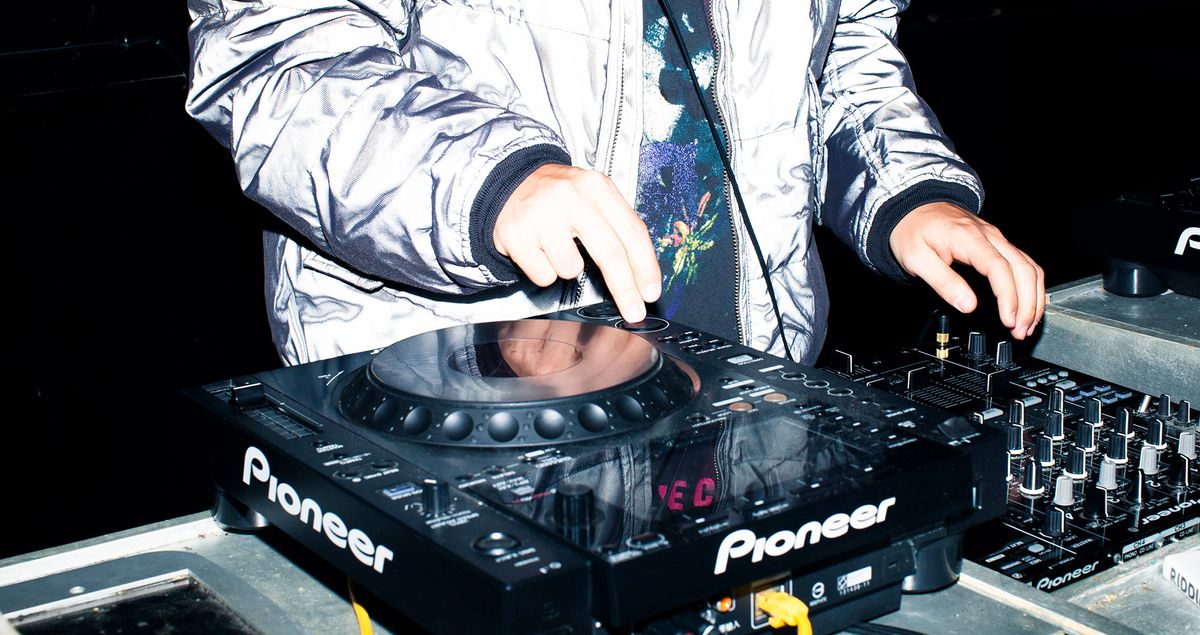 Fashion and music have an undeniable link. And nothing quite brings the two together like the a fashion show. If you’ve been to one of Alexander Wang’s shows, you know no one does show music better. No one. Sure, every season people talk about the clothes, and who sat where at his Saturday evening show, but every single season people also talk about the music. When it comes to show and party music, Alexander Wang fucking kills it.

And, friends, that’s all thanks to the work of DJ, Jesse Marco, whose CV includes working with brands like Tom Ford, Giorgio Armani, Calvin Klein, and Nike, to name just a few. This season he’s not just DJ’ing the after-party, but the show too (and that’s on top of a residency DJ’ing at the Wynn Las Vegas, and a regular gig on Tuesdays at Happy Ending in NYC), but everyone knows that the real party starts after the show when Wang’s gang of pals head to the after-party. If the party remnants at Happy Ending from his session the night before (think crushed limes, and...party detritus everywhere), Marco really knows how to throw down. And let’s just say we’re hydrating (and stretching our dance muscle) in advance of Saturday’s after-party.

“[DJing] was a hobby from when I was very young, like 12 or 13 years old. My best friend got turntables for Christmas, so naturally I was like, ‘what are those!’ It kind of sped up, and when I was going to NYU, I started to DJ at bars and clubs and slowly working my way up.

“My first gig was Alphabet Lounge. It’s closed now, but it was a bar on 7th and C and we did a party there. I went in there because they’d let us drink, and I told the owner I was a DJ, and he asked if I could play ‘80s music. And I thought, ‘no…’ but I told him ‘yeah!’ So I went to my mom and was like ‘mom do you have any ‘80s records?’ She had tons of ‘80s records—almost every David Bowie album, INXS, tons of ‘80s stuff. So I went in and played Michael Jackson, and tons of new wave stuff and he loved it.”

“I did Alex [Wang’s] after party in like, 2011 or 12, and he really liked the music. It was a great party! I don’t even really remember it—it was the carnival party. I think he would come and see me randomly DJ’ing around the city and thought, ‘Why am I seeing this kid so much? I should have him play.’ He’s really good friends with Zoe Kravitz, who is cousins with one of my best friends Ruckus, who’s also a DJ. He told Alex, ‘You should have Jesse DJ.

“He mostly tells me what music he wants and I just put it together. I don’t want to give it away, but we like the same stuff. He’s just a kid like I’m a kid, and he likes hearing something new and being excited by it.”

“Any sort of dirty New York rap music and pop. Right now any Drake shit, any Future, 2 Chainz, anything that’s going to make the party pop. I probably throw more wildcards than any other DJ—I think it’s kind of gone out of style to throw wildcards, because people are so critical now, so if I play a Clash song in the middle of a set, forty percent of the kids might not know what it is. I feel like it’s kind of my job to do that and be like, ‘You should know about this, and you’re playing yourself if you don’t—because it’s great.’”

On finding passion in your job:

“My uncle says it you enjoy your job twenty percent of the time, you’ve got it made. So that’s kind of how I look at it. I definitely treat it like a job, but I do have a passion for music. That passion doesn’t always come through, but if we’re talking about making an analogy of a night that I’m DJ’ing, if twenty percent of the night, time-wise, I get to play what I want, then I’m happy.”

How he finds balance:

“I was sober for a year, I’ve been on both ends of the spectrum. Because I’m on the end of the spectrum: no phone, unplugged, foliage everywhere, I balance it out. I think the plant thing is funny, I put it on my Snapchat, but it’s really calming to focus on something other than yourself.

“I love plants. I have like 30 or 40 of them. It’s not even work for me; I love taking care of them, giving them funny names and treating them like people. Shirley is my favorite plant, but she’s messy as hell. She’s a big old hanging plant, it’s a bitch watering her, but she’s gorgeous. I love her.”

His advice for getting into the industry:

“Go all in. No pussyfooting around. It’s hard and there are going to be tough times but you have to do it. And if you have a feeling about it that maybe you’re not so into it, then do something else, because there’s not enough room for you here.”

How the landscape is changing:

“New York nightlife is going in such a great direction. We’re doing ‘Living Room Sessions’ on Tuesdays [at Happy Endings] and it’s a new party that I do here—sometimes we live stream it, but we’ve had everyone from Travis Scott to Lil Yachty and Kingdom and Joey Badass (all of the new young rappers and artists). It’s moving in a direction where the young kids have all the power now, and you can’t deny that—it’s going to change the landscape a lot. It’s going to bring more diversity, it’s going to bring better music, and I think a lot of people don’t want it to happen because it’s going to screw up a lot of people’s business to have these kids dictating what’s cool and what’s fun. Kids now are so cultured, and most people aren’t like that, but because these kids are like that, it’s going to permeate into lots of different things. It’s exciting again. I see the clubs happening, less bottle service maybe, more people coming together, more DJ’s coming together and playing together collectives. No more Paris Hilton is hosting tonight…that’s over. It’s going to be great.”

“’I’m going to Singapore for F1 this month, I have Alex’s show, I have a residency at Wynn in Las Vegas—it’s usually once a month, but I’m there this month once a week. I also recorded an album, it’s kind of secret—it’s under a different name. I don’t know when it’s coming out. I’ve taken my time with it, it’s been five years, but Juelz Santana is on it, Ghostface, Eliza Doolittle, The Soul Brothers are on it. I worked really hard on it and recorded it on a farm in London over the course of a year. That’s the main thing I’ve been working on but I put out records constantly—I have another single coming out soon, it’s called ‘Little Mama,’ and it’s with this rapper Rico Richie.”

His drink of choice:

“Don Julio 1942 on the rocks with a little splash of lime. It’s the best tasting tequila, and it’s the party juice! But not too much, just one—don’t be gross. I think that I pick and choose when I want to enjoy myself. I can go and play and be sober, like I did last night, or I can have a couple if I want.”

Where he goes for a late-night meal: