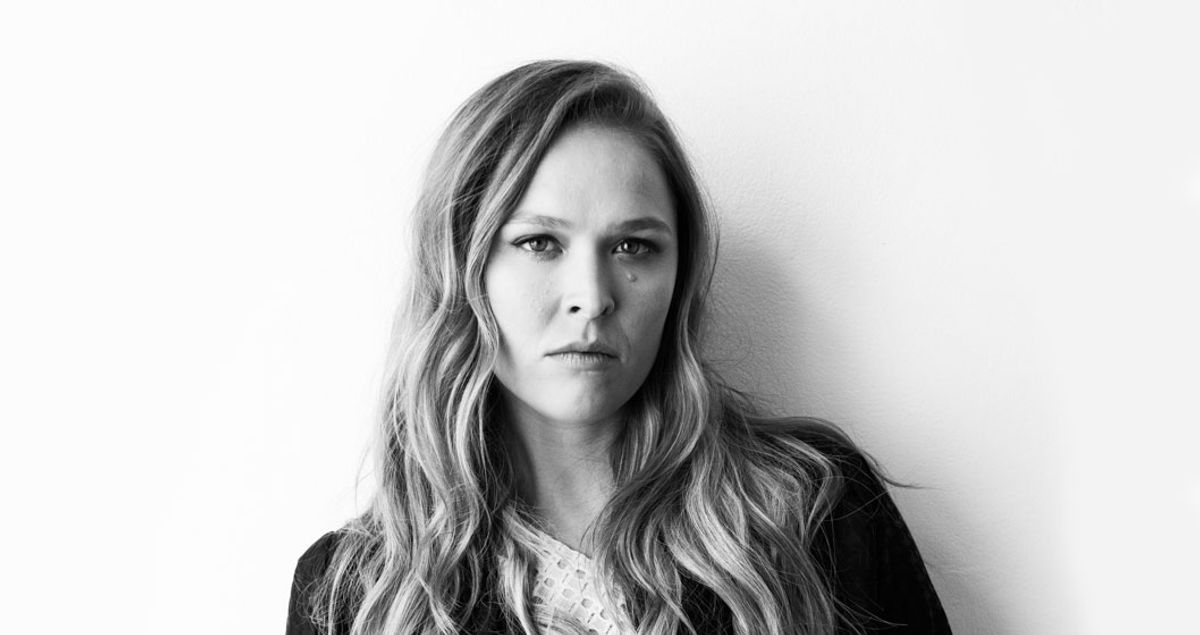 The MMA fighter sounds off on social media, makeup & the world of celebrity.

We went into a recent lunch with Reebok knowing this much: there’s no interview potentially more intimidating than one with Ronda Rousey (we have a recurring nightmare where she calls us a ‘Do Nothing’ bitch). What we didn’t anticipate? While we knew the mixed martial arts and UFC fighter isn’t exactly what you’d describe as shy (and that’s precisely what we like about her), we truthfully didn’t think we’d come away feeling quite as inspired as we did. Speaking pretty damn eloquently about a range of topics that click perfectly with the brand's #PerfectNever campaign, Rousey touched on everything from the empowerment she finds from her own imperfections, to society’s obsession with social media to mental health, and what it’s like to experience celebrity, all with her signature no-BS cadence. Not that we would expect any less.

On why she’d choose being ‘imperfect’ over ‘perfect’ any day of the week:

“These little constant quests for perfection start pecking away at our attention. Perfect never leaves room for improvement. And perfect never lets us focus on what’s really out there for us to achieve. When we worry about perfection, our bigger goals are sacrificed. We can’t look up, work hard and kick ass. But having the confidence to ignore the perfection around us can be difficult.”

Her two cents on how social media is changing everything:

“Social media is definitely taking the ‘social’ out of how we communicate. Yeah, it’s weird. The idea of actually having a conversation is weird now because people don’t want to go through the inconvenience of saying ‘hello’ and ‘goodbye’. People are just trying to get to the base information all the time. There’s nothing in business school about how to interact and socialize with people. That’s something you learn through practice that people just aren’t practicing anymore. People are becoming more awkward with each other.”

Why it especially affects women:

“I think that women are such self-analytical beings that social media makes media permeate more of our lives all the time. Everyone is running their own PR for themselves through social media. The human instinct towards grooming and hygiene is like marking yourself for social acceptance: People are tinkering with their social media and it’s their way of grooming themselves, of checking themselves in the mirror. But, it’s not their physical appearance anymore, it’s their digital appearance.”

Why she makes it a point to stay real (like, really real):

“I think that we live in a time where there’s a lot of worship of celebrity, and there are really unrealistic standards being put on everyone. I find it ridiculous that a plus-size model is actually just the size of the average American woman. Why is there that separation? I call it the world of celebrity; they’re the popular kids of the world, and it’s an unrealistic representation of who they actually are. They come off so perfect, and made up, and have no problems, they don’t go through the things that people go through.

“I try to be as open and honest as possible and show all of those things. I go out and walk around without makeup or anything. I like how my face looks. Some people who know that they’re going to be photographed have to be made up all the time. But I want people to see what I’m like all over the place. On days when I’m just slumming around, that’s just how I am. I’ll surprise people if I have an event to go to and I feel like prettying it up. If it’s fighting time, it’s fighting time. I’m not trying to make it look perfect all the time. I’m just trying to look like myself all the time.”

How she deals with an instinct to be a people-pleaser:

“The acceptance of criticism is part of who I am. I’m not a lukewarm person: people either hate my guts or they really, really like me. I think that accepting that, and becoming fine with that, is good. As long as you have an opinion about me, it means that I’ve influenced you in some way and I should be happy with that. I think a lot of women are under the impression that they should make everyone around them like them and be happy all the time. But, I think that you have to realize that not everyone is going to like you, but you’re going to be happy, and things will be okay, and you should still love yourself.”

How she deals with her newfound celebrity:

“People come up to me sometimes and they’ll be like, ‘You’re Ronda Rousey.’ And I just don’t even really get what that means. I don’t really understand what everyone expects from me. It seems like it’s coming differently from every different direction. No matter what I do, there are people that are happy with it and there are people that are hating it. You’re completely directionless, so you really just have to do you because everyone is going to love and hate you, simultaneously.”

How she keeps perspective on setbacks:

“I try to keep in mind that every missed opportunity is just a blessing in disguise. Every movie part I didn’t get, every loss I ever faced, anything that I felt was so negative and felt like the end of the world, I always look back on later and thank god that it happened later. Not winning an Olympic Gold Medal was the best thing that ever happened to me.”

Why her partnership with Reebok isn’t your typical endorsement:

“It’s about you. Not about how you want to look to everyone else. So many other apparel brands are so much about how you look for others, and it really isn’t about making the person wearing it happy and being able to do whatever they want to do that outfit in. Reebok is entirely different. It’s really about empowering to be able to do something. We were all sitting around the table [referring to the women sitting around the Reebok #PerfectNever LA luncheon] and I was like, ‘Look, it’s a bunch of Do Something bitches!’ It’s true. Those are Do Something clothes, and these are Do Something bitches.”

What the brand’s slogan ‘Be More Human’ means to her:

“To me, it means self acceptance and taking risk. There are too many people out there who think they’re a great person based off the things that they don’t do. It’s not about that. It’s about the things that you actually do to make the world a better place instead of the things you abstain from. And there is a risk when you put yourself out there like that. There is a risk of failure, of it not working out, of you looking bad. But, at least you’re trying. By going out there and trying to make the world a better place, you’re taking a risk and you’re going to do that. That’s what being more human means to me.”

Her definition of beauty:

“It’s passion. Anyone pursuing their passion is beautiful to me. Beauty is passion and health. Any body in its healthy state is beautiful.”