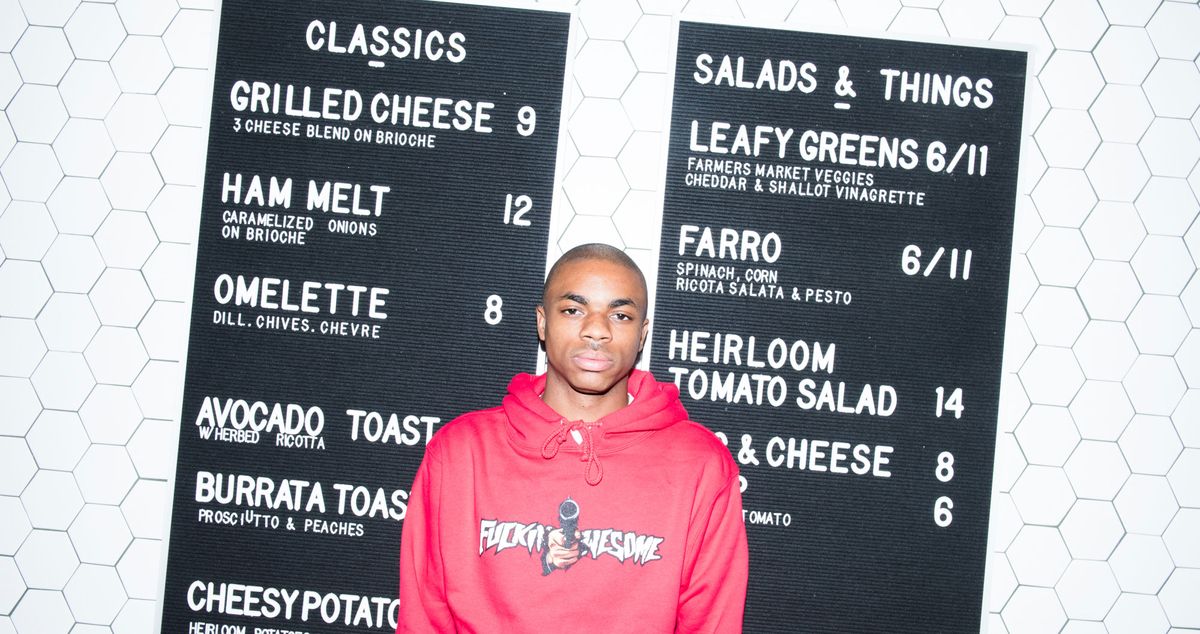 At Los Angeles’ Grand Central Market, talking about, well, everything and nothing.

Because it’s pretty much our job to hang out with cool people, we’ve had to invent a million and one ways of saying someone is cool and that it was fun to hang out with them. But in the case of this interview, I’m just going to put it this way: meeting rapper Vince Staples was really fucking cool. He’s super young and unbelievably smart, and I’m a massive fan of his music. I can’t quit with Summertime ’06 (his new EP, Prima Donna, coming out on Friday is on my must-listen-to, will-almost-certainly-be-obsessed-with list).

We met him at Grand Central Market in Los Angeles (if you’re not familiar, it’s kind of like a big, built-out food court except with really, really good food), which is near his apartment and, according to him, the only place he ever goes, and we just followed him around and asked him about...well, everything. Over a bowl of granola (which, sadly, did not meet his granola standards), we chatted about Yelp’ing, MySpace and Ponyboy from The Outsiders. It was just the best. And because the conversation took such a, well, conversational turn, we’re just going to publish our whole chat here.

Coveteur: What are some of your favorite places in here?

“The crazy thing about it is, like, I’m never here. With the touring and all that good stuff, you never really get to be home. When you do come home, you end up going to the same places over and over again. I go to Apple Pan a lot. I’m pretty all-American, pretty basic. Genghis Cohen is really good if you like Kosher Chinese food, which a lot of people don’t like. It’s very good. You’d be surprised. Everywhere—I mean, I have a Yelp.”

Coveteur: Do you write reviews?

Vince: “I don’t write reviews anymore because, one time, I wrote a review and it got overblown. It was good stuff, but then people wrote about it in newspapers and stuff. It was for a place in Louisville and I guess some thirsty hip-hop blog found it and made it a big deal. So then people started sending me their mix tapes on my Yelp account. It was crazy. So, I don’t write reviews anymore. But I usually write positive things.”

Coveteur: Weird. I read that you have a photographic memory. Is there anything that you do forget?

Vince: “I don’t believe that I have a photographic memory. I think somebody just made that up one day and said it. That’s, like, from the movie A Beautiful Mind, right? See, I can’t do that. But, I don’t really forget much. I’ve never dabbled into drugs and alcohol. Weed makes you lose your memory, I’ve heard. So, maybe everyone else just can’t remember and I’m okay. I forget my passwords sometimes. I forgot the password to my Myspace once in the 10th grade and it was real heartbreaking. Other than that, I don’t think I’ve forgotten any passwords.”

Coveteur: Are you still on Myspace?

Vince: “I wish, I wish. That would’ve been great. Myspace was the future. Myspace ruined the world.”

Coveteur: Besides music, what else are you interested in?

Coveteur: But if you’re not interested in music, then why music?

Vince: “I think for that very reason.”

Coveteur: That doesn’t make any sense.

Vince: “It does! No pressure.”

Coveteur: Okay. But music is different from the “scene” of music.

Vince: “Right. So you mean, like, the actual sonic sound of music?”

Coveteur: And the writing part of it and everything.

Coveteur: Who are your favorite writers?

Vince: “I like S.E. Hilton. I don’t really like Ponyboy much, to be honest. I feel like he is a horrible person. Ponyboy from The Outsiders. Honestly, he’s a piece of shit. He shouldn’t have let Johnny die. But, other than that, she has some pretty good books. I like James Joyce. I don’t understand anything he’s talking about.”

Coveteur: I don’t know if anyone understands James Joyce.

Vince: “But I think that he’s not saying anything. I think he’s talking out of his ass and I think he got away with it. It makes no fucking sense.”

Coveteur: What’s happening with your sweatshirt? It’s hot as hell outside.

Vince: “Well, I get really cold really fast. My air conditioner is on in my car all the time. So, I know I’ll have to put the hoodie on eventually. I’d rather be hot than cold. I’m a tropical person. Have you ever seen the movie Lilo & Stitch?”

Coveteur: No, I haven’t.

Vince: “Me neither. But, I’m pretty sure they were on an island or something and that’s how that went down. I saw it was on Netflix last night, that’s why I said it. I don’t really think I have a style. I just put on clothes. It’s funny. I’m short and I’m like 20% torso, so I have to tuck my shirts in all the time because, otherwise, they’ll be too long. I went to Optimal Christian Academy and they made us tuck our shirts in, so it was a bad habit, but now I guess rappers are doing that, so I don’t look that crazy. They used to make fun of me and laugh at me on the internet. But, now rappers are doing it, so it’s cool.”

Coveteur: What did you order?

Vince: “I got granola. It’s disgusting. No one should ever eat that. It’s not a good choice. And I got an iced coffee because I don’t sleep. I like making coffee at my house, I’m really good. James Blake also has like an actual coffee machine in his house where he grinds the beans and shit. But, he’s British so that’s different.”

Coveteur: What’s it like working with him? He’s amazing.

Vince: “Me and James don’t work that much, we just hang out. We spend, like, 5% of our time making music. We’re friends. But James is really good at making music. He asked me to do a verse for a song for him. And then he was like, ‘Honestly, I didn’t really want you to do it, I just really wanted to meet you.’ And I was like, ‘Aw, that’s sweet.’ And then he was like, ‘Do you want to use my beats?’ And I was like, ‘All right.’ I was going to do it anyway even if i didn’t like them because he was nice, but he is really good at music.”

Coveteur: What about your new music?

Vince: “Yeah, it’s cool. I’m very indifferent on music. I don’t necessarily know what’s good or bad. I don’t think that’s real. I think it’s just what people like... My mom calls me all the time about little, stupid shit that I don’t really care it. She has all my magazines and flyers and stuff. My mom is my favorite part of all of it. She’s crazy, she’s hilarious. That’s the best part. Shows are cool. I like little kids that come to my shows with their parents. It’s my favorite part. I love show moms. It’s crazy. And they always get the meet-and-greet package and the T-shirt for their little badass kid.”