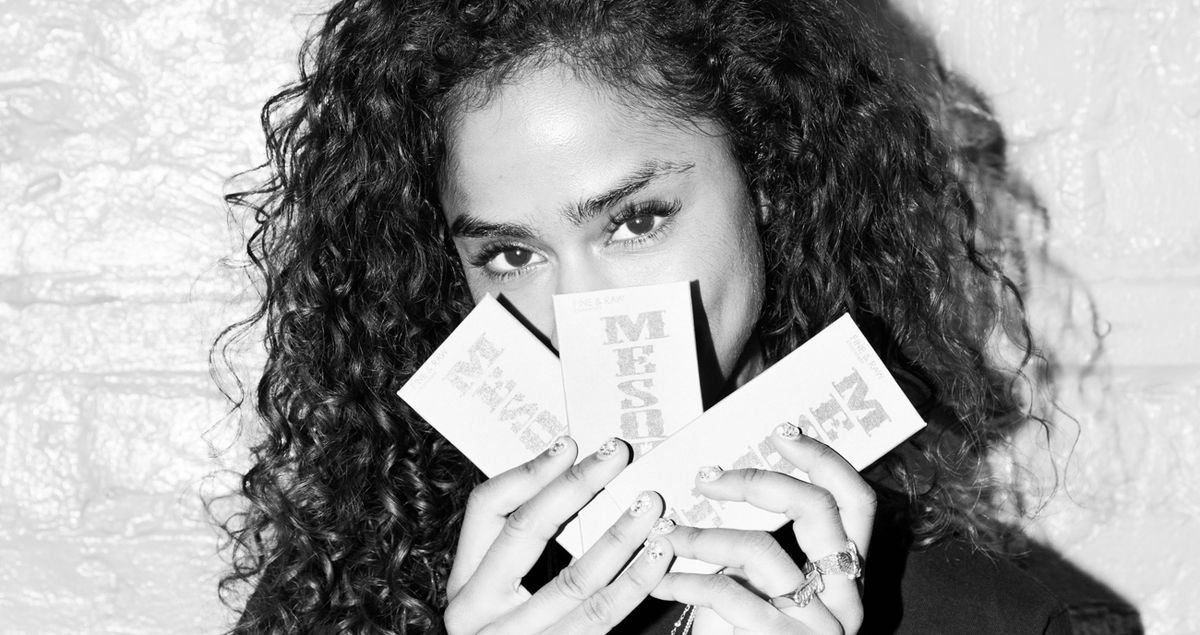 She grew up on Cheetos and Cherry Coke. If she can do it, you can too.

Hands down the most addictive part of Snapchat? Getting a firsthand, largely unfiltered look at the real-life routines of anyone who fascinates us. After all, when it disappears within 24 hours, is there really such a thing as oversharing? From colonics (yup) and juice fasts to morning meditation, healthy travel snacks and then some, Vashtie puts it all out there—and, predictably, it has us coming back for more. She's basically the reigning queen of trying admittedly weird shit in the name of wellness—and we kind of love her for it. Even better? Unlike the majority of the fitness-y types you follow on Instagram, she's honest about having to drag herself to the gym. And despite being a vegan since her middle-school days, she actually understands that not everyone can snap their fingers and have all of their meals magically replaced by kale. Not bad for a girl who grew up on Cherry Coke and Cheetos, huh?

How she came to be a vegan:

“When I was a kid, I always knew I wanted to be an artist, but I also loved animals, so I decided at nine that I was going to be a vegetarian. It was very weird for my Trinidadian household; my parents were like, ‘Eat your curry goat, what’s wrong with you?!’ At 12 or 13, I met a friend—his name is Eddie Bauer, actually—and he was vegan and straightedge. He taught me about veganism and showed me all of these crazy videos of animals being tortured. I’ll spare you the details, but I was like, okay, I definitely don’t want to drink milk anymore or eat anything from animals.”

“My general wellness goals are for longevity—whether it’s for the day or if it’s for life. It’s about being as healthy as I possibly can be and aging gracefully.”

Her go-to means of hydration:

“I stay hydrated by drinking water—specifically, I drink a lot of the rose water and ginger water from Juice Press. I kind of grew up as a city kid and I literally never drank water [laughs], so my world was definitely far different from this. I literally drank Cherry Coke all day long as a college kid. I never drank water, so now I like flavor and carbonation. I like Perrier, because it reminds me of drinking soda and I miss soda. I basically trick myself.”

How she was a ‘bad vegan’ as a teenager:

“I became vegan, but from age 12 to high school and through art school, I was a bad vegan, as they say. I would go to fast-food restaurants and get the vegan option; I wasn’t eating kale or whatever. Ten years ago, I started to really understand the connection between what I was putting inside my body and how it pertained to my skin and my energy levels. I used to skip meals all day because it would just make me tired, and then I realized, ‘Oh, maybe it’s what I’m eating that’s making me exhausted and tired.’ Slowly but surely, I started to transition from eating heavier foods to eating lighter foods to then transitioning into eating very raw and very vegan. It was, like, a long process, but that’s how I got here.”

Getting honest about working out(!):

“Working out is not necessarily something I want to do. I’m naturally just not a workout kind of girl. I love eating healthy, but for me, working out is more or less part of my job because I have to stay fit, I have to be on top of my game. What I like to do is literally just cardio on machines, which is probably not the best way to do it because I’m not necessarily connected to my body and in the moment; but I like working out on an elliptical or an arc-trainer. I get my cardio in and, at the same time, I get to do work, which, again, is not something a fitness guru would tell you to do, but it’s what works for me. I get it done.”

How she maintains her mental health:

“I stumbled upon meditation about a year ago. I was doing meditation on my own, trying to perfect it but realizing there is no perfect way to mediate, really. It’s just about having quiet time to yourself. This is what I learned: thoughts will come to you, but the idea is that you just slowly let it come to you and let it go away from you.”

Her guide to getting into meditation:

“I took a class in transcendental meditation a year ago, and I practice religiously now. I do it twice a day: 20 minutes in the morning, 20 minutes at night. That’s how they teach you to do it. They give you your own mantra. You don’t share that mantra with anyone—it’s yours and yours to keep. That’s something that makes a difference, especially as a creative, because your brain is constantly on, even when you’re sleeping. For me, meditation is numero uno.”

Why she’s a fan of transcendental meditation over everything else:

“I just found that Oprah does it, Jerry Seinfeld, Ellen, every famous person you could probably think of practices it. I didn’t understand where it stemmed from, but even my business manager is like, ‘Oh, yeah, I did it; my mom took me to do it.’ I’m like, ‘What?’ Apparently, when The Beatles were traveling they went to India and stumbled upon transcendental meditation from the Maharishi, and they introduced it to America. Basically, the difference between transcendental meditation and other forms—I can’t really speak on all forms—is the mantra they give you. And that it allows you to sort of delve deep, deep, deep, deep into the deepest layer of yourself.”

How she stays healthy despite a crazy travel schedule:

"I have to pack snacks because on the road there’s a lot of seemingly healthy options, but they’re not—it's like a bag of roasted, salted nuts at the airport. If something’s in front of me, I tend to overeat it, so I need to have the healthiest snacks in front of me. For me, it’s definitely about coming to a store like Live Live, getting sprouted raw nuts or even packing snacks at home, getting a bag of baby carrots, chopping some celery and having those kind of options. But I also like some pre-packaged options, like Skinny Pop—they have it in the airport, it’s like olive-oil popcorn. It’s really just about being prepared, but if I travel in America, it’s pretty simple to find the local vegan, vegetarian restaurants, the juice spots. I mean, L.A. is a very easy city to navigate for that, but going to a city like Paris is much more difficult.”

The weirdest thing she’s tried in the name of wellness:

“I do colonics, and some people find that to be very weird, but I do them once a month. I’ve tried live algae, which sounds horrific, but it’s really not that bad. You can get it in pill form or liquid form—the liquid form does not taste very nice, but it’s not bad. It’s great for energy levels. I tried kava, which is a root I believe, and it’s just supposed to chill you. It’s also a way to drive out toxins from your body, but, at a place like [Live Live], you drink it and it literally is almost like smoking weed [laughs]...a very strong, potent version of it. I’ve tried water drops that make your water wetter, if that makes any sense? They sell it here; it’s a molecular-drop thing.”

The healthy add-ons you’ll always find in her bag:

“I take alkaline water drops when I’m travelling because water tends to be very acidic. Bottled water is because it goes through a crazy process in order to be clean, right? All of these chemicals are pumped through it, and it’s great ’cause it’s clean, but at the end of the day you want your water to be alkaline. If I’m drinking from any tap, anywhere, I’ll put alkaline drops in. And himalayan sea salt! I literally take packets of that with me and I’ll sprinkle it on things because table salt is not good for you. I have, like, a pouch with all my little trinkets and things. It looks crazy.”

“Eating nuts! I’m not supposed to eat nuts. I have a low-thyroid disorder, so there are certain nuts that I’m supposed to stay away from. Even though I eat vegan and raw, I will go ham on dessert, so vegan ice cream, chocolate... I grew up eating Skittles for breakfast with Cherry Coke. It wasn’t weird—you’d have a bag of Flamin’ Hot Cheetos and a Snapple, and that was breakfast.”

“What I eat for breakfast is usually fresh fruit. I eat berries, so blueberries and strawberries, and I drink coffee. I tend to skip breakfast—I’m not a breakfast girl—but I’ll try to eat fruit in the morning. I tend to go for a cold-brew coffee—cold brew is better for you because it has lower acidity. The most organic cold brew, because coffee and wine, I’ve learned, have the crops that are pumped the most with pesticides because they’re such a sensitive breed. So an organic cold brew with carrageenan free almond milk.”

“It’s all organic. I can’t eat nuts anymore, but organic nuts like almonds and cashews; organic raw fruits and vegetables; a bottle of Macallan’s 18; a bottle of Moët Rosé; and Smart Water or alkaline water.”

“I wake up in the morning and start off with a cleanser, either by Biologique Recherche—which is very pricey but it’s honestly a little goes a long way with it—or I use Dr. Alkaitis’ cleanser and toner. Then I use Luzern, a serum, then I do Dr. Alkaitis anti-aging oil. I use coconut oil after that, so I just slather. I believe in moisturizing.

How to slowly make the transition to veganism:

“People say to me all the time, ‘I want to be vegan, but I can’t give up cheese,’ and I’m like, you know you can eat an 80% vegan diet and on Saturdays be like ‘This is my day when I eat cheese,’ you know? People shouldn’t feel committed to a term or to a lifestyle or to a menu or diet. If you know that you wanna be vegan, but your mom makes a bomb pot roast on Sundays, then maybe that’s the day that you get to do what you wanna do.”

Her advice for anyone looking to live healthier:

“I would tell them that they should start with one thing at a time or one day at a time. My wellness path has taken me more than half my life, and I think that sometimes when people think about wanting to be healthier, it seems daunting. Maybe just start with meatless Monday, start that way, you know? It’s just about starting one step at a time and then seeing how you feel. I just feel like if I told someone everything that I do and I was like ‘Do that!’ obviously it’s going to be overwhelming and not work for them. At the end of the day, it’s your health and your future. We can do better than the ones that came before us, and that's the point: that our generation get better and healthier. We have the access, we have the knowledge. One step at a time and one day at a time.”