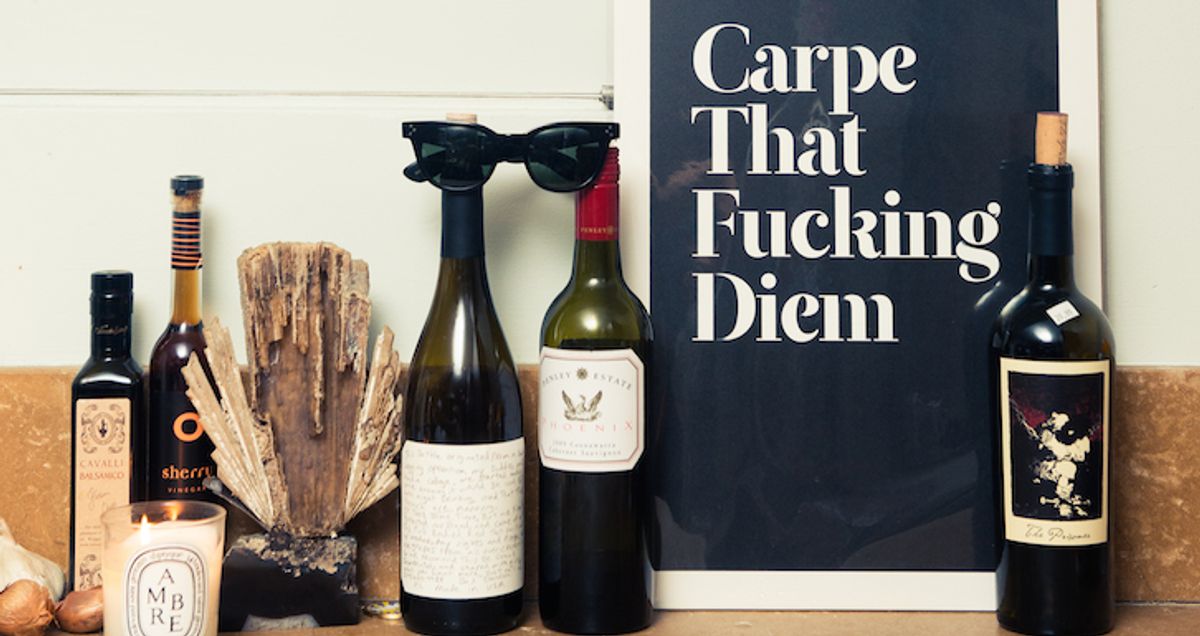 How to Deal with PDA (Post-Drinking Anxiety) in 60 Seconds

It’s the collateral damage that comes with holiday party season.

The year was 2014. The setting was a very indulgent office Christmas party where the mulled wine started flowing at noon and the bad decisions followed shortly thereafter. We had rented out the kind of members-only social club that had a no-photos rule, which everyone promptly forgot upon arrival—especially when, after two hours of ladling generous helpings of seasonal punch into the wrong glass, you decide to burst into an inexplicable solo dance routine and fall backwards, taking a number of the art-directed canapés down with you. Not that we’re speaking from experience or anything, but these are the kinds of things that are brought up on a bi-weekly basis for, at last count, a full calendar year.

Seriously though. With enough Christmas parties/Chanukah parties/dinner parties/dance parties to fill an Olsen Twins’ You’re Invited box set, getting through the month of December regret-free is about as easy as getting through the month of December debt-free. While we can’t teach you good holiday decorum in 60 seconds, what we can do is help you deal with your PDA—Post-Drinking Anxiety. Here’s how to make sure you still have friends, a job and most of your belongings come January.

So you shattered your phone

A classic. Maybe you slipped on a patch of black ice, or maybe you just drank everything in the world, but you’ve woken up with a broken phone (and probably no VISA and no keys either, right?). Take deep breaths, remember your phone isn’t your actual baby, and come to terms with the fact that your holiday budget may need to be adjusted to account for your own dumbassery.

Depending on your model, you can usually get a shiny new phone screen in an hour if you’re willing to shell out about $100-$150 bucks. If it’s anything below an iPhone 4S or equivalent pre-2014 cell, it might be cheaper to just get a new phone altogether. If the tumble has also affected the phone’s sensor, power button, camera, etc., it can be worth your while to upgrade to a new phone even if you have a recent model, so book a consultation at the Genius Bar before racing to Chinatown for questionable cellular surgery. It’s a bummer, but hey, you won’t do it again, right?*

So you spilled all your secrets to Dan in HR

Maybe it was an unintentional offensive comment, or maybe you spilled your friend’s yet-to-be-announced pregnancy, but you’ve woken up with that horrible knot in your stomach that tells you you’ve said something very, very wrong. Now here’s the difference between being a drunk teen and being a drunk adult—it’s no longer acceptable to just ignore the situation and hope that it just dissipates with your adolescent hangover.

The only thing that’ll keep you from feeling awful and nervous for the entirety of the holidays is to take responsibility. Apologize to whomever you’ve offended right away, and tell them you feel like a garbage human. Call your friend and admit you accidentally spilled the beans, but follow up with exactly how you plan on controlling the situation so that no one else finds out. It can be tough, but honesty is the only thing that’s going to clear your bourbon-fogged conscience. Trust.

So you texted your ex

One thing that’s guaranteed to dig you even deeper into the shame-hole? Lying. It never works. No, your friend didn’t steal your phone and text thirteen pizza emojis and a winky face to your Tinder fling. No, you weren’t “probably roofied.” You’re a grown-ass woman. That blurry horrible cleavage pic either needs a witty follow-up, stat, or a sincere apology. The latter is usually the way to go if deep down, you know you’re never, ever, ever getting back together, and/or you just really don’t want the receiver of said pic to “corme ovbr.”

Your memory is hazy, but you have a vague snapshot of demanding the driver put on Hotline Bling, only so you could dry heave between off-key verses. Log into the app, hit the profile icon in the top left corner, select “Help,” then “Account,” then “I’d like to know my rating”, and wait for an email from Uber Support. If you’re at all concerned about a bad review, write them an email apologizing for your off-color performance—Uber customer service is usually very attentive and quick to respond.

So you burst into an inexplicable solo dance routine and fell backwards, taking a number of art-directed canapés down with you