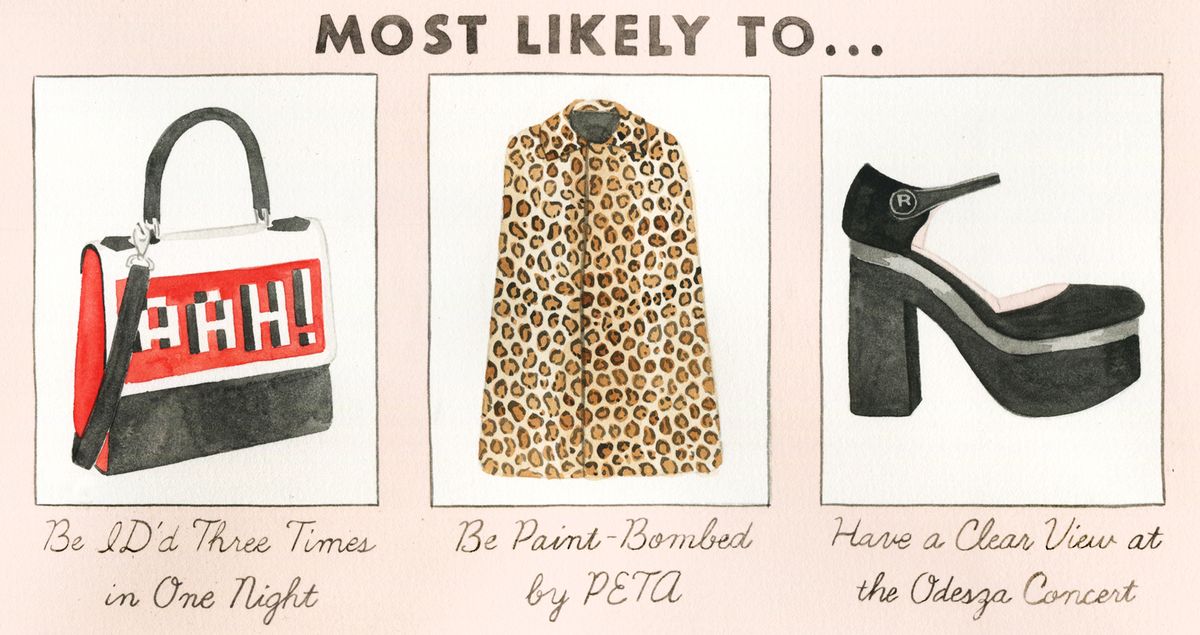 Most Likely To Win a Spot in Your Fall Wardrobe

The best statement pieces of the season get the high school yearbook treatment.

As everyone knows, the ‘Most Likely To’ designation you were assigned senior year is about as accurate a back-cover horoscope in Tiger Beat (for instance, ours was Most Likely To Have a Secret Second Apartment Just For Clothes, which is completely ludicrous. We have a warehouse for that). Not only were these predictors penned by a 30-70 split committee of school council keeners and stoners gunning for a last-minute A, but they were also about as original as your day-of-the-week Abercrombie polos—not to squash Connor from Computers’ dreams of candidacy or anything, but we went to high school in Canada. Most Likely to be President? Really?

In the spirit of back-to-school season, we decided to revive the age-old Most Likelies, but this time using a roster we have a little more faith in: the statement pieces we’ve been coveting for fall.

(No word yet on a frontrunner for Prom Queen, but we heard Sasha from Social Studies rigged the vote anyway. That wench.)

Less Polarizing on The Sartorialist than IRL

As most furry oxblood gender-fluid footwear is. Strut these badass brogues past the street-style scrum for a surefire hero shot (you didn’t get dressed to be Slideshow Photo 14, did you?).

Most Likely to get

“You know I could have knit that for you, dear. Look at those hems. Jesus Murphy, you paid HOW MUCH?!”

Get an extra vial of hollandaise! Stuff a to-go waffle in your pocket! Sashay past the swollen bellies in sweater dresses all the size and location of my thighs will remain a mystery.

Most Likely to Be

Warmer than Your Leather Jacket

While your squad shivers under a thin layer of hide come November, you’re the one dressed like a cool-girl Peruvian Sherpa cocooned in 15 pounds of linen and wool. And they say cold-weather dressing is hard.

“She seemed pretty blasé about the whole thing, but I don’t know, no one wears growling jungle cats on their shirt if they’re not down, right?”

In a pinch, stuff with a scarf for a Cher Horowitz-worthy nap. This thing just went from Cyrus-y splurge to fundamental human right.

Have a Clear View at the Odesza Concert

Plus, if a much less resourceful concertgoer taps your shoulder to tell you she can’t see, one swift toe-stomp and she’s someone else’s problem. (Kidding. Kind of.)

ID'd Three Times in One Night

How do you look five years younger in five seconds? The answer’s pretty clutch. This graphic tote can turn back the clock faster than resveratrol.

“This is printed on goat hair, honey. It’s practically faux.”

5 Founders Share How to Launch a Truly Sustainable Brand