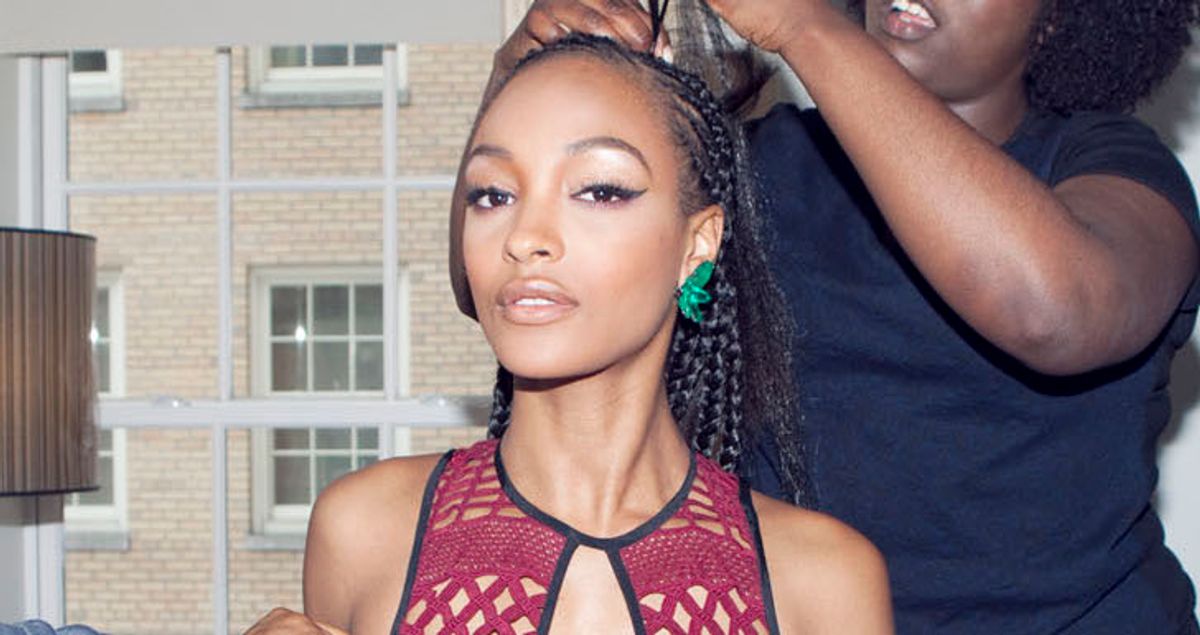 Getting ready with the British model and Burberry for the 2015 MET Gala.

It wasn’t exactly the way we pictured it. You know, when we arrived at our shoot with a 5’11” model (who just happened to be wearing custom Burberry) totally disheveled, out of-breath, hair akimbo, wearing majorly rumpled linen. Blame it on an overzealous security guard, but mainly, blame it on Obama’s motorcade (see: “Here Comes Obama and His Bag of Traffic Nightmares")—the bonafide Birkin bag of traffic nightmares. But we digress, because a few minutes in, Jourdan Dunn’s pre-Met Gala suite made it all worthwhile.

The first thing that struck us was Dunn’s personality—okay, maybe it was her Burberry crimson dress, with the up-to-there slit and/or her literally (literally) 10 mile long legs—but then it was most definitely her personality. Because she’s got a lot of it. And, it’s amazing. She’s honest: “I’m really nervous!” She’s #justlikeus: “Has my Bacne cream sunk in?” She’s humble, poking fun at herself after filming a hokey Snapchat: “I sound like such a loser.” She’s also uber stylish, asking her hairstylist last minute to pull her plaited hair back into a pony to “let it flow” and suggesting a slightly bolder lip to match her dramatic cat eyes.

In the spirit of camaraderie and flowing champagne, pal Emmanuel Ezugwu was on his knees blowing her wet hair (first literally because communication is tricky business, then with a Mitt Diffuser because duh, these people are #professionals). On went the emeralds and with a runway strut out the room (like, actually though), Dunn was whisked into the lobby where she chatted with fellow Briton James Bay before slipping into Christopher Bailey’s limo and causing a legitimate paparazzi frenzy. We wouldn’t be surprised if she caused her very own bag of traffic nightmares—a glamorous, Burberry plaid one, of course.

MET Gala
Part of the series: