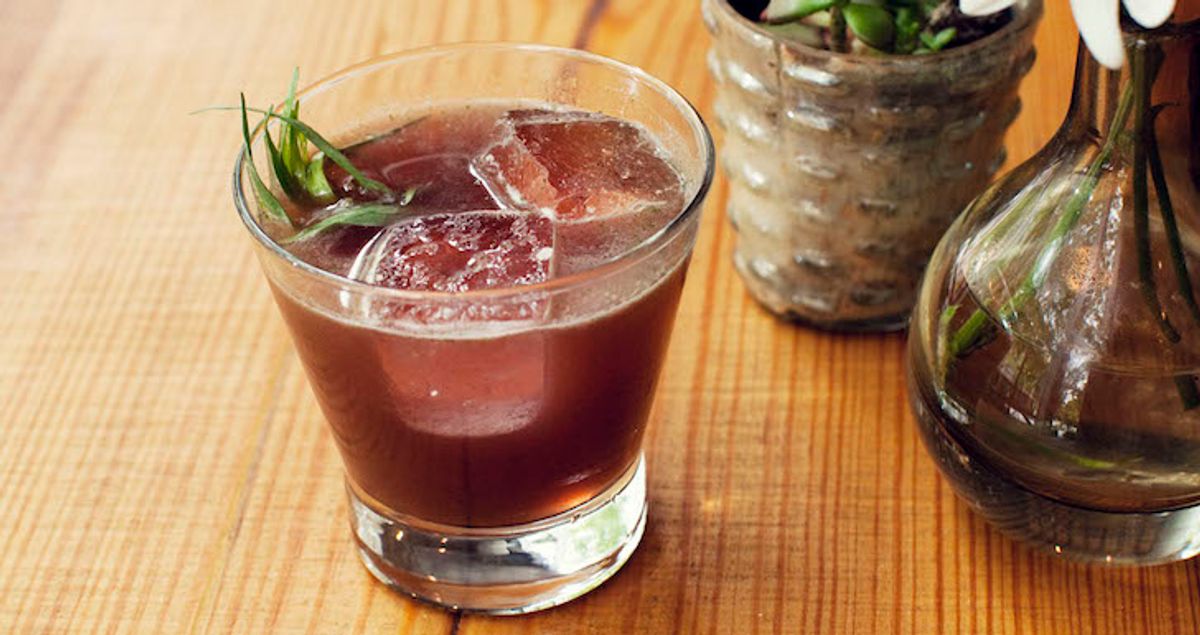 Day Drinking: The Red Dragon at The Grain

For our inaugural adventure in Day Drinking, we're taking things over to Atlanta—sorry, the ATL—where bartender Kevin Bragg of Midtown's Grain, serves up delicious artisanal cocktails alongside equally delicious charcuterie and oysters. Here, he breaks down the steps to recreating their pisco-heavy Red Dragon and talks perfect hangover cures and drinking with his ancestors.

one >  Add three sprigs of tarragon to shaker and muddle.
two >  Add all other ingredients add ice and shake.
three > Double strain over ice in rocks glass.
four > Garnish with a sprig of tarragon.

ON HIS FAVORITE DRINKING SOUNDTRACK:

"I've really been enjoying the Soul Coughing channel on Pandora. A really nice mix that I can groove to."

"I was never much of a flare guy, but did use fire from time to time."

ON HIS FAVORITE COCKTAIL (OR LACK THEREOF):

"I don't have a favorite cocktail. It really depends on the mood, weather, etc. I do tend to go for boozy Rye or Mezcal cocktails though."

ON HIS LIQUOR OF CHOICE:

ON HIS MOST MEMORABLE COCKTAIL EVER:

"It was more an overall experience than one particular cocktail. I went to Angel's Share in New York with some friends. Shingo Gokan had just dropped a new menu and brought us every cocktail. It was amazing."

ON THE VERY BEST HANGOVER CURE:

"Corpse Revive #2. It's light and refreshing. It's perfect for reviving you when you feel like a corpse."

ON HIS DREAM DRINKING BUDDY:

"I'm a descendant of John Adams so that's an easy one for me. He was a big cider drinker, so I'd probably make a cocktail with that."