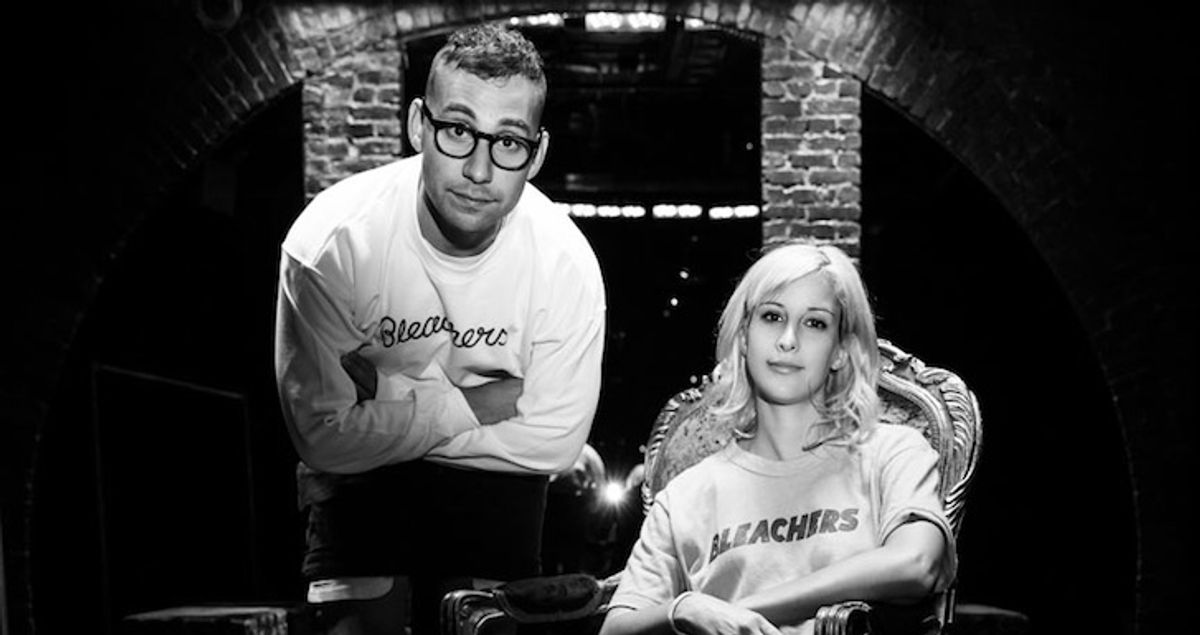 Katie Boyle
We won't lie—while our sibling dynamics are, you know, great and all, there's something about having a more, well, Parent Trap, Olsen-style bond that we've always found ourselves envious of. And while the jury's still out on the matching outfits that (apparently) come with it, the one between Rachel and Jack Antonoff certainly looks like that bond. Not only were they impossibly-talented (Rachel's the designer behind our favorite sweatshirts/loafers/Peter Pan-collared dresses, while Jack is the the lead guitarist of Fun. and frontman of his latest project, Bleachers), one-time roommates (yes, as adults), but they're also the kind of siblings who finish one another's sentences, design t-shirts together and yes, even wear matching ensembles. Here's everything else we discovered while chatting with them before a recent Bleachers show at Webster Hall, which doubled as the debut of Rachel's line of Bleachers tour merch. See how it all comes full circle?

On their new line of Bleachers merchandise...

Jack: "Rachel makes these sweatshirts that I feel like have become very specific to her brand, and I wanted it to feel just like that, so that it was like my band inserted into her look."

On the importance of band tees growing up...

J: "I had a lot. I'd buy stuff at every concert. My favorite stuff was the shitty silkscreened stuff that you would get outside of the concerts, that people would sell for five bucks. We had that inspiration on some of my other merch, but basically I wanted all of the merch to be a combination of the shitty '90s stuff you'd buy outside of a concert and the really simple, elegant stuff that Rachel makes."

R: "It's the perfect marriage of the two! I had less band merch growing up and more musical theatre merch. I had a lot from different shows. I had a lot of Cats stuff."

On the ultimate #TBT—Bat Mitzvah t-shirts...

R: "Aerosmith was a big one for both of us because that was our first concert."

J: "Anytime I would go to a show, I would buy merch. But back then, it was just like the album cover with the dates on the back. Nowadays, you go to the Kanye West tour and there's a whole line that's specific to the tour. Things have changed so much! But I still have [old band tees] and I still wear them."

R: "I have a lot of Bar Mitzvah merch, too. I don't know if people still do that, but that was a thing at Bar Mitzvahs, that they would have a t-shirt printed with all of the names of the kids from the class who came on the back... instead of tour dates, I guess."

On their first-ever creative collaboration...

J: "We painted and drew on the bottom of our table growing up."

R: "We did a really long project where we would sit under the kitchen table and draw on the underside. Since our parents are weirdos, they never said anything like 'don't draw on our furniture!' We just did that for months until the entire surface was covered. We moved, and for some reason––I would think that would be some relic you would keep forever—but our parents were like, 'I guess we'll chuck the table,' so we don't have it anymore."

J: "It's bizarre. Imagine having kids and having something that beautiful happening and then throwing it out?"

R: "I guess it's from the same deranged minds of the people who let it happen in the first place. That was their kitchen table! They weren't like, 'here's a piece of paper.'"

On getting dressed for award shows...

R: "For those sorts of things, it's nice doing for a living what I do. I usually have a pretty specific image in my head. Last time [the 2013 VMA Pre-Show], I don't even know where it came from, but I thought I needed to wear a pink pantsuit and so I did. This time [at the VMA's] I had less of an image, but we had just finished our Spring 2015 show, so I grabbed a silhouette from there and grabbed the new fabric."

On helping one another get dressed...

R: "Jack has really good taste. When I was trying to pick different dresses or [decide] which fabric would be best, I usually send him a picture. He has a lot of confidence in his opinions, which is nice, because he'll be like, 'the pink one', and you're like, 'oh, that's the right answer'. I'm indecisive.

J: "I think that actually goes both ways, because it's very easy to be decisive about other people."

R: "He really has an incredibly strong sense of style and it's such an annoying, cliché thing to say, but in Jack's case it's true: he's dressing for himself. I love opinions. Not from random people, but people who are very close to him. I'll send Jack pictures of new samples, and you seldom do that."

J: "There's a constant email chain of five friends that you're always sending to, looking for opinions."

R: "It's true. I like opinions more than Jack does."

On their penchant for matching outfits...

J: "The boat-neck striped top and the turquoise pants and the knit boat shoes."

R: "Maybe it's just because it was the first time and it felt really hilarious, but maybe it's because we went to a P.F. Changs. Where was the P.F. Changs?"

R: "Somewhere in Wisconsin, so it was sort of the perfect storm. Yeah, I think that was the best one. That day, we were on the way to P.F. Changs, and then we were passing a J.Crew, and I really don't know why we said 'lets get matching outfits', but we did."

On the online shopping virginity, the mall and defining New Jersey style...

J: "There's a lot of oversized women's shirts that look great on me."

R: "I love the Gap. A lot of good stuff is happening there."

J: "I feel like growing up, Rachel never shut up about The Limited."

R: "No, it was The Limited Too. Limited Too was really, really cool when I was growing up. Anywhere at the mall was pretty interesting to us."

On the best dressed musicians—from Raffi to Brooke Candy...

R: "Jenny Lewis puts a lot of thought into how she presents herself and I think she always like she looks pretty great."

J: "Yeah, I like that new suit she had made. Morrissey always looks good. Jack White always looks interesting. I couldn't wear the stuff that he wears, but he looks cool."

R: "Who else? I feel like there's a lot of musicians, maybe more on the female side, who are really sort of strongly linked to fashion. Like Bat for Lashes, or..."

J: "Brooke Candy all the way."

J: "No one looks better than Grimes."

R: "No one looks better than Grimes, ever. Raffi? [laughs]. Who else looks good? Who's that red-headed girl? Florence? Florence Welch."

J: "Hayley [Williams, of Paramore]. She's wearing a boxing outfit on this tour that I love."

J: "True. Kathleen Hanna looks good. The girls in Warpaint look good. We just played with them and they look good."

The other sibling most wishes they could dress like...

J: "I would say Rachel wishes she could dress like Grandma Ann."

On how they would describe one another's style in one word...

One thing people would be surprised to learn about the other...

On their dream dinner party guests, dead or alive...

On which film character's closet the other would most like to raid...