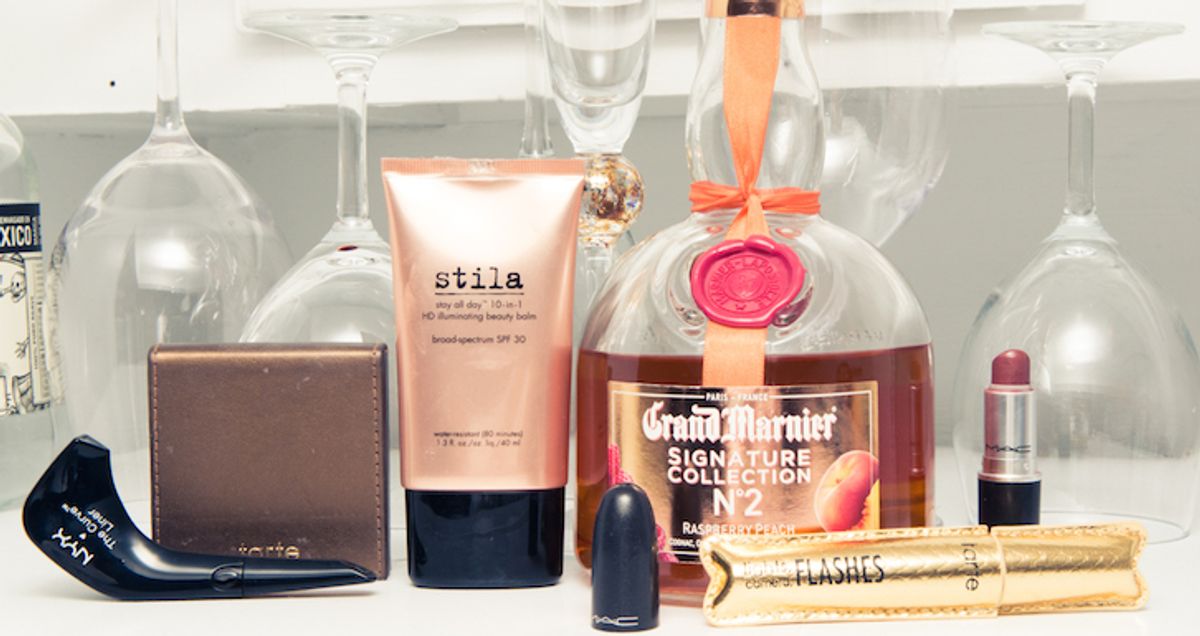 3 New Ways to Cure a Hangover

No need for Advil and the fake-sick day.

Katie Boyle
There are a few things in life that let you know that you are definitely, beyond a shadow of a doubt, no longer eighteen.

Like when you first realized that same endorphin high you used to get from that guy’s texts is now literally rivaled by the feelings you have towards kale (happy-dance included). Or when you spot a throng of collegiate clubbers sporting what appear to be repurposed sausage casings and you feel a maternal urge to tug down their Lycra hems. But—contrary to what some cosmetics brands will tell you—the most telltale sign of aging is when you wake up the morning after three glasses of holiday-party pinot spooning the base of the toilet and feeling as though your head has been trampled by a stampede of angry interns. Your sophomore self would so not be proud.
With party season just a flip of the calendar away, we decided to get a preemptive handle on our upcoming mornings-after with a little more help than our standard Gatorade-and-Gravol cocktail. So this time, instead of trying to pinpoint the exact moment when you and Belvedere stopped getting along (uh, that would either be the infamous undergraduation celebration, or that time you attempted to ‘spice up’ your cousin’s wedding), try turning back time instead—or at least hang up that hangover for a night.

On her ‘After Party’ roll-on:

“Having experienced [most] hangover varieties, I tried to incorporate ingredients that would help lessen the most obvious symptoms—headaches and nausea—and still smell fantastic.

There has been research done to support the use of peppermint essential oil topically for post-surgical pain as well as neuralgia (a very painful condition where the person affected experiences severe pain due to nerve damage). It works as a numbing agent but also, through inhalation can help with nausea. Lavender and rosemary are fantastic for headaches when rubbed on the back of the neck; rosemary can help you snap out of it with its memory and focus boosting properties, while eucalyptus acts as a decongestant to help clear the cobwebs!”

“I have a lot of friends that work in finance and I see them continually burning the candle at both ends—suffering through a sluggish day at work after a night out because of their early morning wake up calls. Most of them do not have the luxury of simply ‘sleeping it off’ because they have to be on their toes, ready to perform at the office bright and early the next day. So, we designed a service that allows you to take very few steps to get rid of your hangover, jet lag and fatigue from their daily grind in a safe, convenient and discreet way. We wanted to create something that would give our clients the ability to feel better almost instantly without having to leave your home or office.

Alcohol inhibits the body’s anti-diuretic hormone (ADH), which helps your body regulate water balance. When those ADH levels drop, instead of taking water in (absorbing), the body pushes it out (excretes) via a bodily function you should be familiar with (urine). But after drinking a beer, not only does that full fluid volume pass right through the body, existing H20 gets drawn out along with. One drink = twice the urine. That’s why an IV drip rehydrates on a level way beyond downing a before-bed desperation glass of water. I.V. Fluid is absorbed by the body far better then drinking it—in fact, one liter of fluid is approximately equivalent to drinking a gallon of water. In our drip we add not only necessary minerals and electrolytes but also medications for symptomatic relief, combatting patients’ nausea, headache and upset stomach. A mere 1% dehydration throws the body into a ‘fatigued state.’ This worsens the headache, nausea and lethargy.

On their hangover prevention patch:

“Bytox is a hangover patch that suppresses the symptoms of the hangover. The all-natural patch contains 1000 mcg of vitamin B12 and other B vitamins that make up the vitamin B complex and assists the body in restoring nutrients that are depleted during alcohol consumption. The vitamin B complex in conjunction with other supplements can help restore balance to the body. Bytox has zero calories and won't irritate your stomach, so you can party in style.

[To use it] apply the patch 45 minutes before consuming alcohol on a hairless part of your body. Inside of the arm works great for me. The inconspicuous patch is not only unnoticeable and is composed of organic ingredients but it actually WORKS. No nausea and less fatigue!

You can leave the patch on for as long as you’d like. We recommend 12 hours: that’s a night of partying and sleeping in the next morning. 45 minutes is roughly the time is takes for the patch to release its vitamins.”
More From the series Wellness

Bloating 101: What to Know & How to Help Banish It