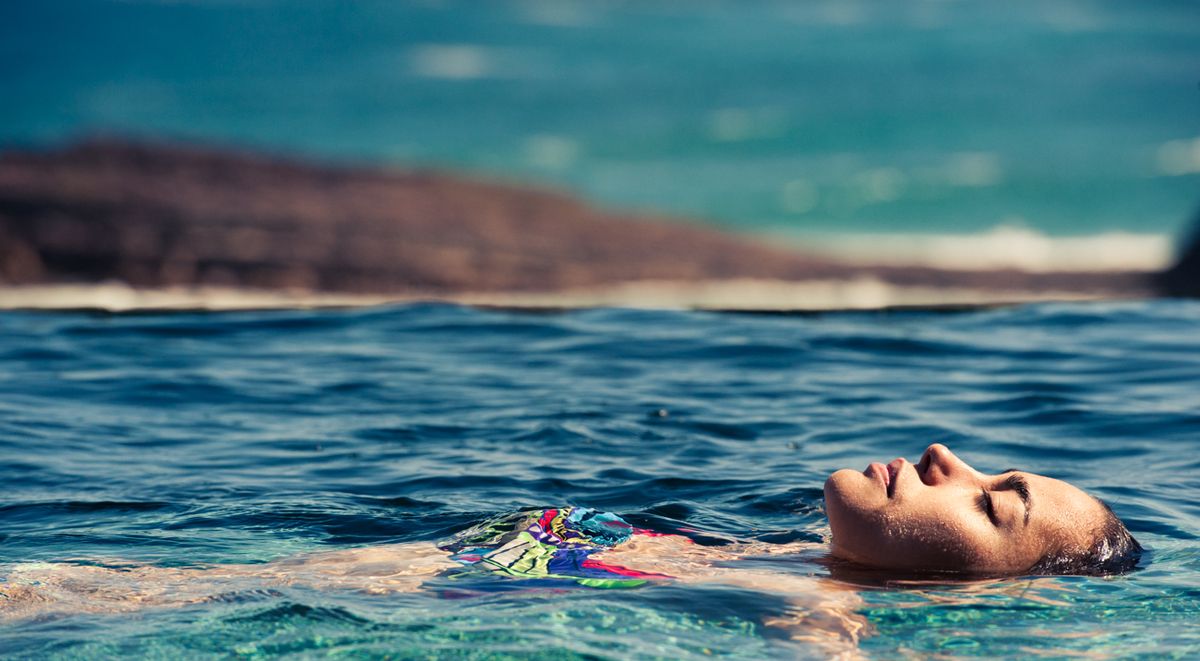 WTF Is… A Float Tank?

Breaking down the thought behind 1,000 pounds of salt and 10 inches of water in a pitch-dark tank.

Katie Boyle
When your unread inbox regularly reaches the 100s and you’re trying to schedule simultaneous shoots in Paris and New York, there might be a few moments dedicated to complaints about stress levels—we mean, who doesn’t immediately reply “busy” when asked how you’re doing? It would be a drastic understatement that researching relaxation and general self-improvement methods is a common procrastination technique among those of us at Cov HQ—everything from a traditional massage to acupuncture and cupping (it’s been done). But as of late, we keep hearing about floating and sensory deprivation, vaguely described to us as lying in a tank of salty, lukewarm water. Wait, what?! So like all good reporters in need of some serious me-time, we decided to investigate.
Turns out we didn’t have to look far. Upon hearing that a local float center, the aptly named Float Toronto, opened only a few weeks ago (we knew we were onto something here, you guys), we gamely volunteered to have founder Jesse Ratner-Decle give us a tour and handed over our submission despite the claustrophobia concerns playing out in our heads. Let us paint a little picture for a second. The tank itself is eight feet long, four feet wide and four feet high, and is filled with 10 inches of perfectly temperate water (that is intensively cleaned through particle and UV filters before being sterilized with food-grade hydrogen peroxide between each float), diluted with 1,000 pounds of high quality Epsom salt. The tank is totally sound proof (it’s double-walled and sits on sound vibration pads) and when the door is closed (minor freak out may have occurred the first time we did so—but you get comfy quick) it’s totally and completely dark. And when you lie back, you float. Actually. Half of your body will literally be out of the water. Yes, it’s as surreal as it sounds.

And then something weird happens. After jostling around trying to figure out what’s comfortable, and getting over the fact that you can’t feel, hear or see a thing (which, for control freaks like us, takes a good minute or two), you kind of lose track. Some people fall asleep. For some time ticks by slowly, for others it’s over in an instant. Some people have even claimed to have visions (ours might have involved wearing that Mary Katrantzou dress we’ve been eyeing on Net-A-Porter out for dinner this Friday).

Following our first float and still feeling a bit, well, out of it, Ratner-Decle broke down what all the fuss was about. “Your stress hormones are getting dialed right down—your fight or flight, your cortisone levels. Simultaneously, you’re getting a huge dump of magnesium through your skin, which is a natural muscle relaxant—that’s what’s in the Epsom salt,” he explained. “All of a sudden, all external stimuli are shut off. You’re also getting an endorphin rush. You come out euphoric, almost with a natural high.” Okay, so that explains our somewhat wishy-washy feelings post float.
As it turns out, however, floating isn’t a new-age method of reaching some nirvana state (although we totally encourage floating meditation should that be your thing). Rather, the tanks provide real physical relief for people suffering from chronic pain. “You’re relieved of gravity,” Ratner-Decle pointed out. “Your joints are getting a rest. When you’re on your back, you’re able to unravel your spine, more so than you would on a bed or a yoga mat.” After all, it was a doctor who invented the whole thing back in the ‘50s.
Curious? We don’t blame you. Here’s how to prepare for your first time. Don’t shave for 24 hours leading up to your float—if you do, you’re likely to feel stinging or itchiness in the salty water. Don’t drink any caffeine four hours before (it was hard for us, too) or you’ll risk not being about to relax when the time comes. And have a small meal 90 minutes or so pre-float (a hungry or loudly digesting stomach is straight-up distracting). You’ll shower before you get into the tank (and after), and likely wear ear plugs to keep the salty water out of your ears—if not, wash your ears with apple cider vinegar afterwards.
The effects of the isolation tank are different for everyone and, while two Cov staffers tried it, once in the tank, each of us had pretty distinct experiences. But we have to admit we were significantly more relaxed (physically and mentally) for the few hours post-float (there was a strong temptation to crawl right into bed) and maybe even a little less tense during the following couple days. And guys, at least one of us is going back for more.

Have you ever floated? Do you want to try it?
How do you relax?
Tell us on Twitter @thecoveteur, #CovWTF