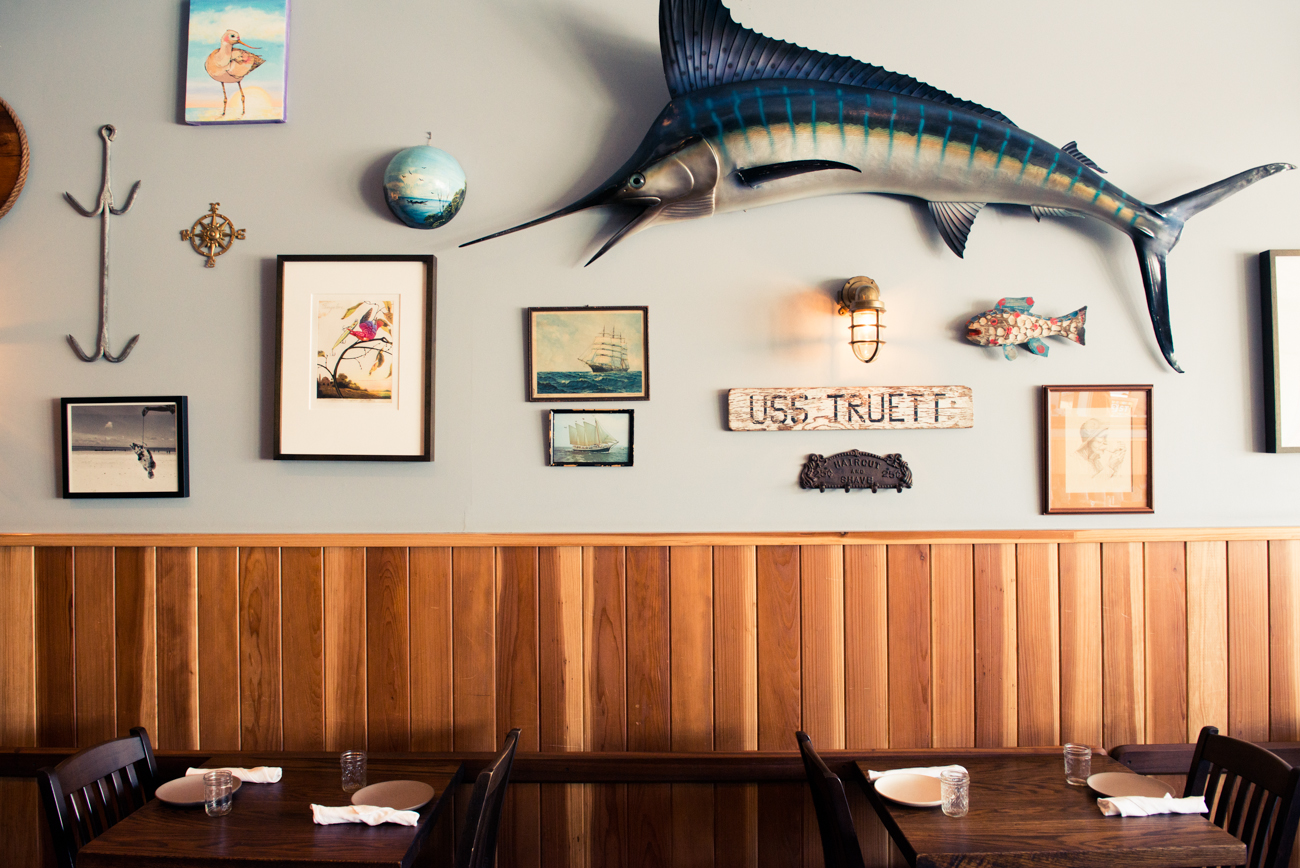 11 Ways to Win in the Restaurant Business

The boys behind L.A. culinary meccas Animal, Son of a Gun and Trois Mec (with more on the way) on what it takes to make it big in Hollywood 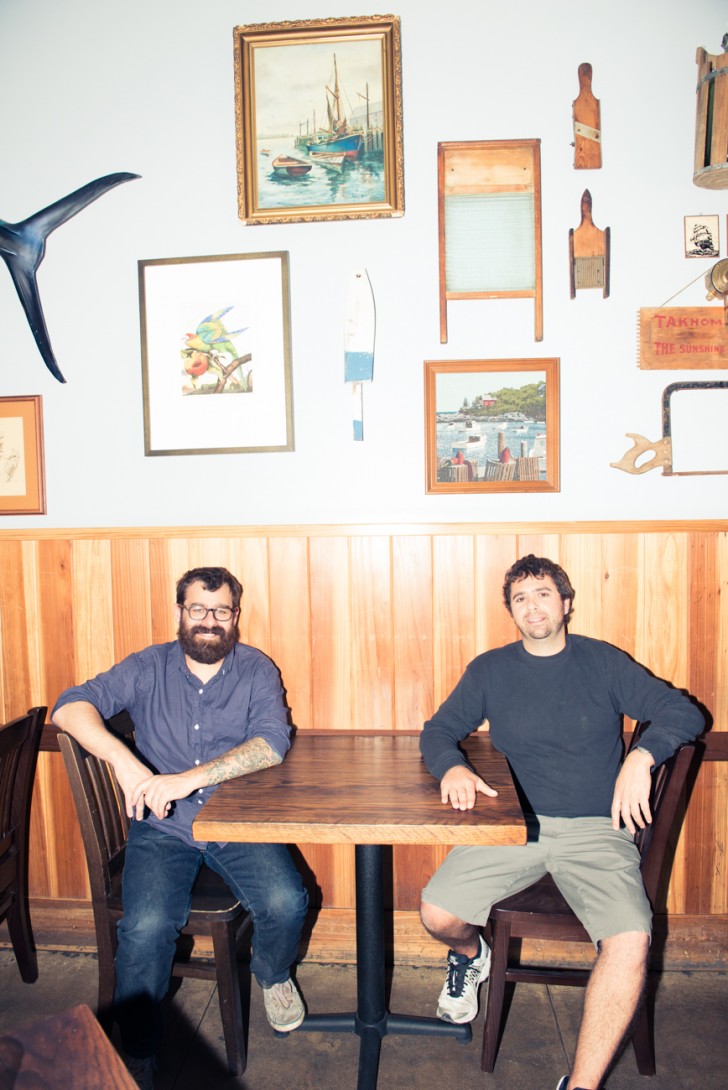 Los Angeles has become a pretty familiar city to Team TC and thus there are a few places that are always on our hit list. The Chateau Marmont, for one (good celeb, uh, spying), Moon Juice for some greens, Just One Eye when we’re hankering for The Row (sometimes, we just have an itch) and Animal. Always Animal. So after so many visits, after raving about it to L.A. visitors and residents alike, we figured it was about time to discover the genius mind(s) behind such an establishment (barbequed pork belly sandwiches, snake river wagyu carpaccio and bone marrow, to give you a few examples of how adventurous this place makes us). After a cursory Google search, we discovered that Animal was the first restaurant of the kingpins of L.A.’s indie, all-local-everything food scene—a.k.a. the reason the previously unremarkable culinary locale has become a top foodie destination.

Partners—or “brothers,” as they affectionately call themselves—Jon Shook and Vinny Dotolo met us at one of their other smash hit restos, Son of a Gun, to hash out exactly how they made it big (in Hollywood). Along with Animal and Son of a Gun (think of the former as their place to experiment, the latter as down home comfort food—a.k.a. lobster rolls and fried chicken sandwiches), they’ve also recently opened Trois Mec, which received five stars all around. And they have plenty more in the pipeline, with not one false note yet. Impressive, right? Of course, after chatting with them, it was only natural that our mouths started to water (especially with scent of dinner prep wafting out of the kitchen), so we just had to ask for a specially made dish, which they happily obliged. (Just FYI, Son of a Gun’s hamachi, galbi vinaigrette, pink lady apple, radish sprout is effing delicious.) But if we’re being honest, Shook and Dotolo were so ebullient and excited about their own successes, we couldn’t help but take a few lessons from their enthusiasm. Whether the restaurant industry is for you or not, we’re pretty sure we could all learn from them. We mean, a business is a business, right?

Jon Shook: “Whatever feels right, we just go with it. We try not to premeditate too much, like hey, this is the kind of success we’re going to have and these are how many restaurants we’re going to have. Whatever we feel comfortable doing we just do—that’s really it. We both like making decisions and we both like doing our own thing.” 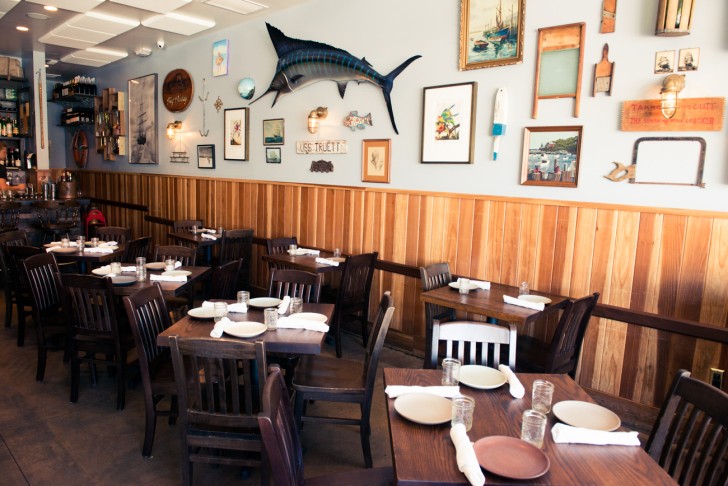 Tip 2: A brother is better than a business partner.

JS: “This is really random, but sometimes I ask myself, “If I met Vinny now, would I be friends with him? Would I want to be his partner?” At the time we met we were at a point in our lives where we were both kind of wanting the same thing. We had a lot of similar interests. Our business partnership has become a brotherhood more so than anything else. We’ve become family. When we met, we were both finding ourselves and exploring the world and becoming adults together. Really, cooking you get paid shit. That’s just what it is—you get chump change. Together, we just realized how much easier it was to have one another. Not just cooking, but also mentally, physically, financially—all the elements that go into our relationship. That’s kind of how it started and now it’s evolved. Our company now is so much bigger, than it’s ever been. Everyday, weirdly, it’s growing in size. We’re proud of what we’re doing and also, outside of the restaurant, the rare times we do get together outside of the restaurant we reflect. It’s hard to describe. There were probably four years that we had every meal together, literally. And now it’s rare that we can get our families together to have dinner. We still spend a lot of time together because we work and travel together, but when we met we didn’t have all that. It was just us. There would be times where we would have nothing to talk about—we would just sit there and eat. For a long time we talked about owning our own restaurant. We took this crazy road to get there, that wasn’t a traditional path. It still isn’t a traditional path that we’re on.”

Tip 3: Make your dream a reality.

Vinny Dotolo: “At first, it was a dream. That’s what we always talked about. For nine years, everyday, we would just talk about how we were going to own restaurants. That’s what blossomed first. It organically came together and we actually started catering out of [Animal’s current] space. We just figured it out, but then we had to learn to run a business, which was a whole other thing.”

Tip 4: Learn to delegate and evolve.

VD: “I used to work on the line and Jon used to work on pastries. We were both line cooks together—he worked mornings and I worked nights. When we started catering, for a year, I would write the menus and we’d fax our menus to people—then we got a computer. Now, we’re trying to focus on where we want to go and it’s not even about us. It’s about our team, the people that are around us and our partnerships—we know we can’t be everywhere. We’ve accepted that.

Tip 5: Work on new projects (that excite you) all the time

JS: “We just did that project with Ludo Lefebvre, [Trois Mec,] that is so dope. It’s so dope looking—drive by and check it out. This place was about everything being as good as the other thing: the design, the drinks, the food. Our other places are about the juxtaposition of having this crazy food.

“We’re talking about projects we don’t even have in construction yet—we don’t even have a spot for them, but they’re already festering. We still do spend a lot of time together—we went from going 24/7 to 18/6—so we spend a lot of time bugging out about what interests us, what we think is cool, what we think the food scene in LA is lacking or missing. There’s so much already exists. There aren’t as many gaps. When Animal opened there were a lot more gaps. So now we have to think even farther. We have also gotten into design and ambience, like where the speakers would be placed in a building, where as before we’d just blast music.” 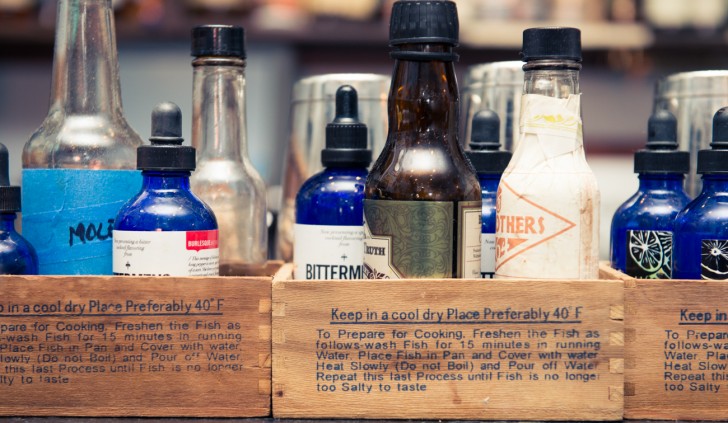 VD: “We like eating simple food. It’s so cliché. In our twenties when we were cooking, everyone said that as you get older you like simpler things, processes, flavors. I’m finding it to be true. I’m eating lighter. I think your palette changes. I think the new-new is more a family vibe, but it’s got this deep design element. We’ve gotten deeper into the art scene and museums. Long story short, we’re working with a designer who we have a lot of respect for. This guy is super thoughtful. He’s an architect-designer, which is an awesome combo to be. He was a graduate of the [Frank] Gehry world and worked for them for 9 or 10 years.”

VD: “We’re a little crazy when it comes to details, but I think you have to be a little bit obsessed with what you’re doing in order to do well and keep growing. You don’t feel dated—we want it to feel new and fresh. I want people to recognize what we do. We don’t just want to do cookie-cutter stuff. If you’re working with someone who isn’t talented it’s like you’re pulling them up the hill, but if they’re talented they’re pushing you harder. We don’t like coloring in the lines—we just go all over the place—but that’s because we’re not comfortable with the cookie-cutter stuff. We’re not going to go [in just] one direction because we have so many passions. We love the bounty of California markets; we’re so passionate about them—we use good ingredients and it’s recognized. We’re passionate about the California angle. We also love Italian-Jersey food. My dad’s from Jersey so I grew up in an Italian-Jersey family and I grew up with that food on a weekly basis, so it’s never seemed strange to me. We also [love] the classics from Italy. People love, love Paris, but I really loved Rome more. So [with our next project] we’re tying all of that together with an artistic aspect. We’ve been on that track since before we even touched the wall.” 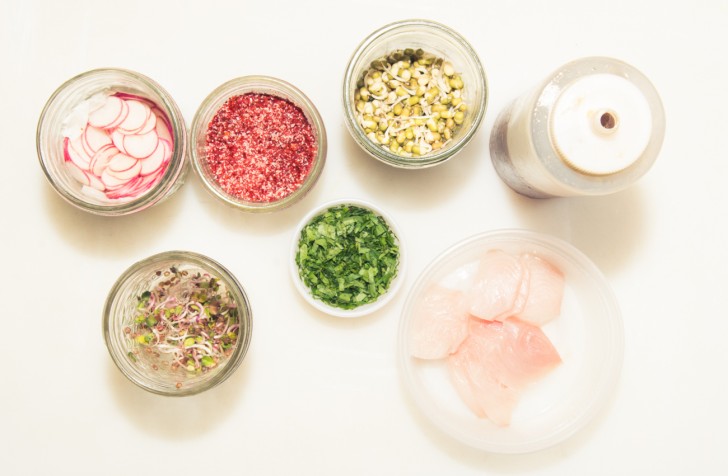 Tip 8: Remember what it’s really all about.

JS: “At the end of the day, it’s still the food. You could be in some disgusting place where the flies are eating your food, but you taste something super good and you forget about everything around you.”

Tip 9: Know the value of a good name.

VD: “The trick to naming a restaurant is believe in it. You’ve got to feel it.”

JS: “[With Animal], one day I walked in and told Vinny I read this poem and read the word ‘animal.’ We used to always be called animals because of our partying and cooking. And it clicked that this was totally what this place was. Restaurants can really capture your life.” 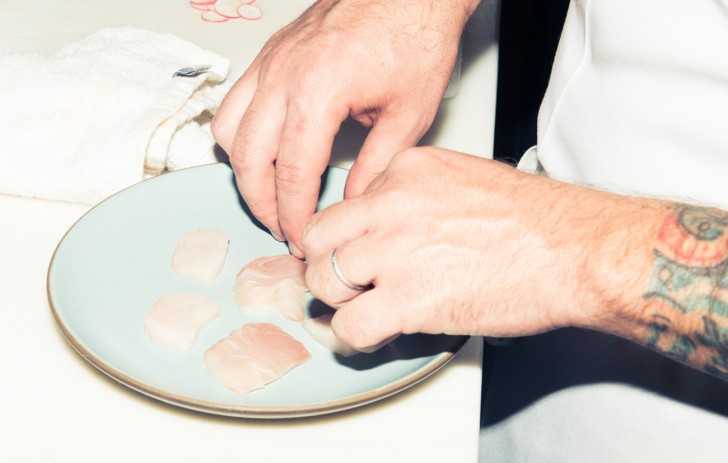 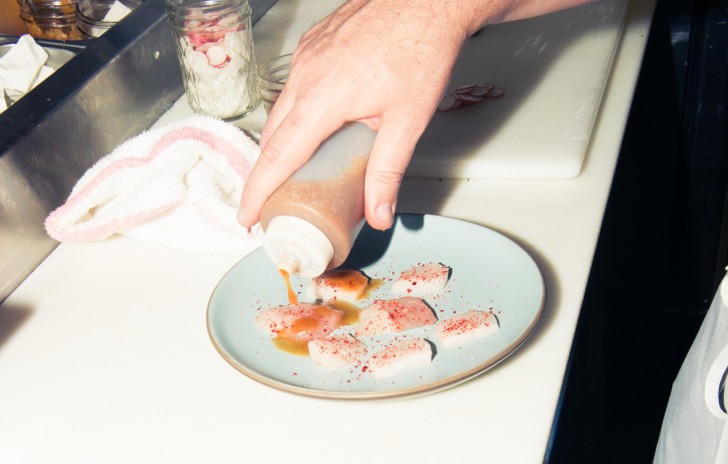 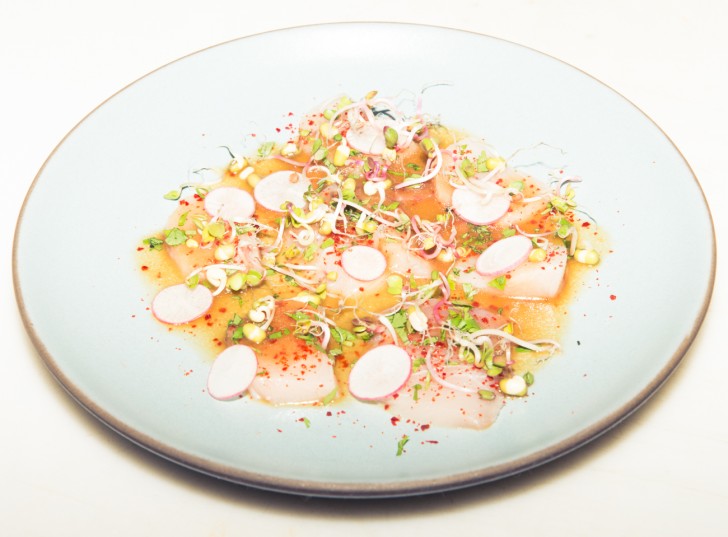 VD: “We’re always paying attention to the little things—it might be how we talk to somebody or a drink or a dish—there’s so much to think about and so much we care about. You put so much into it. We’re not just restaurateurs, we’re chefs! We’re putting ourselves out there and hope you’re accepting it and are satisfied by it and that makes us happy. There’s a huge [group of chefs] now that are doing it to make people happy and express themselves. That’s our goal! It bums us out when someone has a bad experience. We’re not here to take people’s money—if we were, we’d open 100 restaurants and use shitty food. That’s easy to do. Then I’d be sitting on the beach and fucking hanging out. I would and we’d probably make way more money, but we’re so deeply involved about everything single thing, we know every little part of this whole thing and I still want to believe in it.”

JS: “I’m so proud of [Los Angeles]. I think it’s an amazing place. Hopefully, more people start moving here in our industry. Music, fashion, art—those [industries] have really taken the lead here, but I don’t think food is too far behind. I think we still have room to grow. I honestly think L.A. is a top 3 or 4 destination for food here in the United States. Lots of people don’t give us credit for what we’ve created, but the list [of innovations] goes on and on back to drive-thrus.” 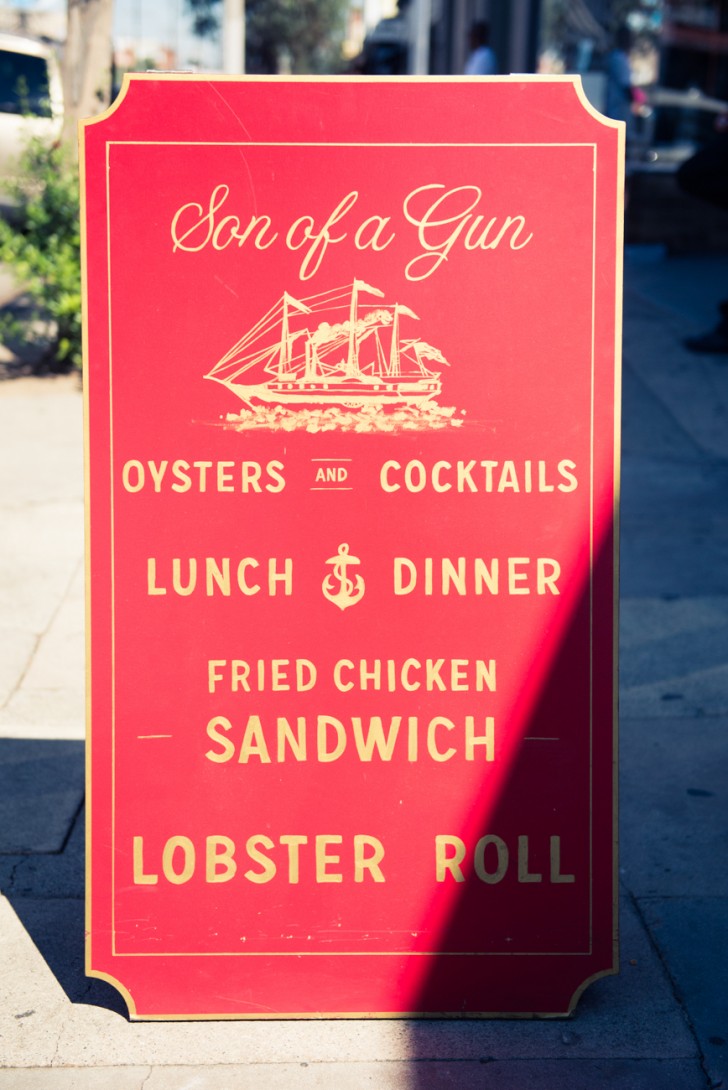