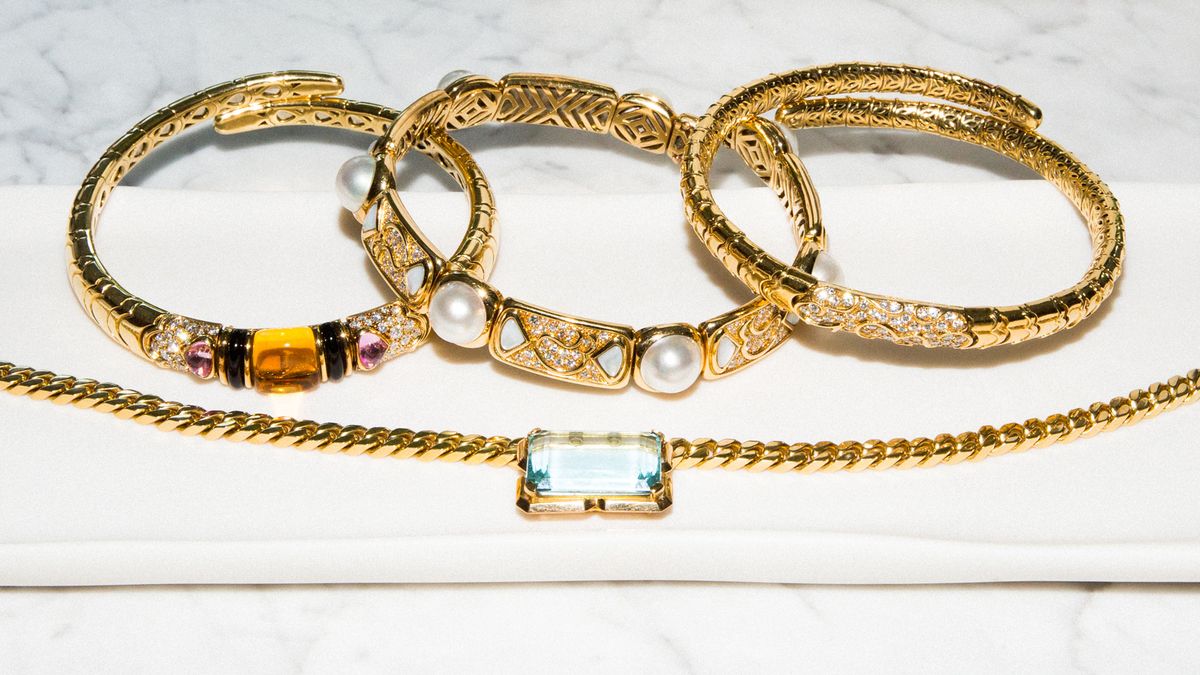 11 Rare & Semi-precious Gemstones Your Jewelry Box Is Begging For

Have you heard of Maw Sit Sit?!

Laura Lajiness
In the gem world, certain stones get all the glory—sapphires, emeralds, rubies, diamonds. But many more lie beneath the earth’s surface, all of which are widely sought after by designers and fine jewelry fanatics for a more individualistic look. To be clear: We’re by no means against popular stones, but when you’re seeking out an extraordinary piece at a slightly lower price point—say, for a special event or as a mood booster because who doesn’t need one right now?!—rare and semi-precious gems are worth the familiarization.

“I love working with gems like lapis, malachite, and tiger’s eye because of the color saturation and opacity of the stones; they have an almost textural feeling to them,” Jen Rush, designer of Rush Jewelry Design, tells Coveteur. Any of these stones can be faceted or rose cut, but the fine jeweler says that cabochons—gems that have been shaped and polished rather than faceted—are her favorite when designing. “My aesthetic stems from the ’60s and ’70s, so these stones, which were used a lot in jewelry at that time, lend themselves to my pieces, especially in The Icon Collection, inspired by Yves Saint Laurent.”

For designer Karma El Khalil, the history of a rare or semi-precious stone is incredibly meaningful and something she’s incorporated into her pieces since her debut collection. “They all have a characteristic that stands out,” she says. “The historical value of lapis in ancient Egypt; the perfectly circular and natural inclusions of malachite; the intriguing chatoyant effect of tiger’s eye created by its wavy and parallel mineral fibers; and the lovely story of how morganite was named after gem collector and financier J. P. Morgan.”

With her signature playful designs, Caitlin Mociun, founder and designer of her namesake fine jewelry brand, frequently incorporates gemstones into seasonal collections as well as her sought-after wedding and engagement pieces. “Colored stones are such a big part of my work,” she tells Coveteur. The designer explains how gemstones’ unique aspects lend themselves to specific designs; it all depends on the look or vibe she’s after. “Opaque gemstones like malachite, lapis, and turquoise are perfect when I want a punch of opaque color or when doing inlay.”

In addition to her core designs, Mociun creates a yearly collection called Fine Foods, infused with all sorts of gems, from sapphires to malachite. “I search high and low for all types of gemstones. This year I used tiger’s eye for the pit of the Avocado charm, grape garnet for the Table Grape charms, and olivine for the Martini Olive. In the past, I’ve carved stones such as snowdrift agate, chrysoprase, amethyst, and rose quartz to make mini popsicle charms.”

Putting the vibrancy and character of semi-precious gemstones aside, one of their biggest appeals is the relative affordability, although the three grading C’s remain pricing factors, like with diamonds. “The value of a gemstone lies just as much in its rarity as in the quality of color, clarity, and cut,” El Khalil explains.

While gems like malachite, lapis, and rhodolite offer shoppers a lot of bang for their buck, some become rarer over time, increasing the value and desire. “Some stones become more valuable because the source of a deposit is depleted,” Mociun explains. The stone Paraiba Tourmaline—a seafoam-colored tourmaline from Brazil—was once relatively affordable, but when the deposit stopped producing, the price skyrocketed. Sleeping Beauty turquoise is another example. “The mine in Arizona closed, and instead of mining the vein-free turquoise that was found there, copper started being extracted from the site,” Mociun says. Unsurprisingly, the price of this type of turquoise—which is what Mociun primarily uses—increased massively.

For a breakdown of 11 rare and semi-precious gemstones we love right now, keep reading, but a cautionary tip before buying: “In terms of durability, most of these stones are on the softer side, which just means you have to be mindful of that when wearing them,” Rush explains. As for the smartest investment? No such thing, according to Mociun. “I’m very big into buying things that you find beautiful and find special,” the designer says. “The most important thing is that you love wearing it and looking at it.”

“Malachite is a bright green, opaque mineral with strié-like lineation, which can be circular or straight in appearance,” Rush says, noting it looks best when polished.
“I can never get tired of the stunning green banding and waves in Malachite,” El Khalil shares. “These inclusions are a reminder that nature is perfect.”
Mociun poetically describes the opaque gemstone: “Layers and clouds of alternating dark green and light green bands. You will usually find it cut into cabochons, flat pieces, or used in the inlay in jewelry. [It] has amazing patterns and beautiful greens; I don’t know of another stone that looks like it.”

“Lapis lazuli, which is a bold, bright blue, is sometimes referred to as ‘Yves Klien’ blue and can be totally clean or speckled with gold, aka pyrite,” Rush says. Unlike malachite, lapis can have a matte finish, which is equally beautiful to the designer.
According to El Khalil, “Lapis was believed to have mystical powers in ancient Egypt and was used in Cleopatra and pharaohs’ jewelry. The depth of its blue color, its resemblance to marble, and its pyrite inclusions give Lapis a royal character.”

“Tiger’s Eye is a golden brown stone with straight lines running through it,” Rush says. “When polished, it creates a ‘cat’s eye’ when moved back and forth in the light.”
El Khalil tells Coveteur, “The chatoyant nature of this gem creates constant movement and reflection that gives the wearer the feeling that it is alive.”
Mociun notes that Tiger’s Eye is an opaque stone and refers to the lines within it as “shiny bands of alternating dark brown and amber.”

An opaque stone, Mociun describes turquoise as “pale, robin’s-egg blue to deep turquoise to light or medium green (usually it turns green when it oxidizes).” The designer says that turquoise is very soft and scratches or cracks relatively easily. “In jewelry, you will usually find it cut into cabochons, flat pieces, or used in inlay,” she adds.

“Rhodolite is a type of garnet that’s more dark pink or purple than the dark red that we usually associate with garnets,” Rush explains. “These stones look best faceted to highlight the deep color of the stones.”
El Khali says, “Rhodolite’s color is almost undefinable. It’s akin to a fine wine, which is layered and complex. I find it to be best described as an emotion.”

“Kunzite is the perfect marriage between blue and pink,” El Khalil tells Coveteur. “And just like for these colors, it elicits great and loyal admirers.”

“Paraiba is the rarest and most expensive type of tourmaline,” says Rush. “Prized for its neon-blue color and extreme rarity, Paraiba is usually faceted to highlight the color and brilliance of the stone.”

“Morganite is a pink beryl, which means that it’s a close cousin to the emerald and aquamarine,” explains El Khalil. “Its rare, brilliant pink and elegant tones are deserving of its prestigious family ties!”
According to Mociun, Morganite’s light pink and peach color range goes from glassy to transparent and cloudy. “It can be faceted or cut into cabochons,” she adds.

“It’s a bright green gemstone which is often confused with jade and found in Burma,” Rush explains. “The color is even better than malachite, and the stone is rare; I buy it whenever I can find it!”

“Iolite is a more subtle and quiet version of sapphire or tanzanite,” says El Khalil. “It’s a sleepy gem, which is a character that I find very romantic and love to celebrate in my jewelry.”
Additionally, the designer says the various shades of Iolite—along with Morganite and Kunzite—are so beautiful that they will always have a place in the market. “They come in a variety of tones, all of which are desirable. My preference for them resides in the fact that these colors are more subtle than their sapphire, topaz, and quartz cousins.”

Rush says that Indicolite is another rare and expensive type of tourmaline. “Blue-green in color (they must have blue or they are not truly indicolite), the stones can be faceted or cabochon cut.”

An Ode to Personalized Jewelry
The 21 Essential Jewelry Pieces We Never Take Off
13 Jewelry Brands That Are Still Innovating & Thriving Amid the Pandemic
Jewelry
Part of the series: