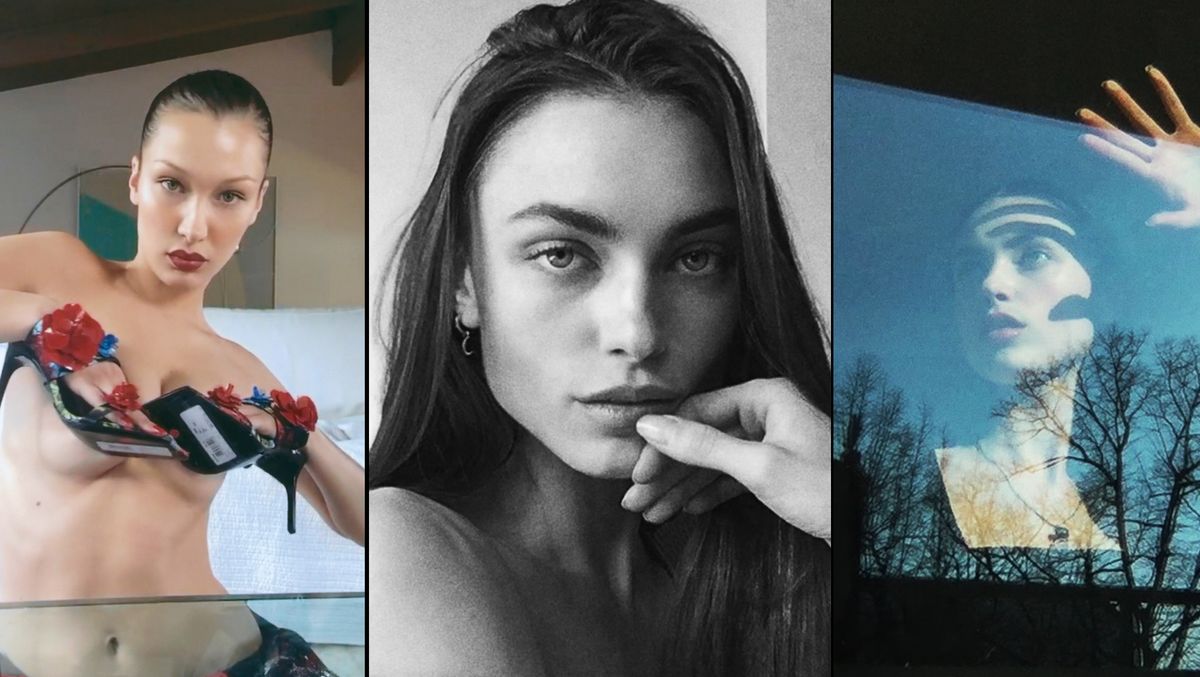 Is Fashion Photography via FaceTime the New Normal?

Camille Freestone
Graphic
Rachel Pickus
For photographer Brianna Capozzi’s recent photo shoot of supermodel Bella Hadid for Vogue Italia, the exotic location was Hadid’s friend’s house. She did her own hair and makeup. Her phone (today’s camera) is propped up on a light ring to capture the shot. Such is the pared-down set of self-isolation.

In light of current social-distancing protocol, photographers are shooting their models from many, many miles away via FaceTime. This “new normal” has transpired out of necessity; a typical photo shoot is currently impossible in light of recent events. Fashion photographers like Brianna Capozzi and Alessio Albi, along with everyone else, are adapting to make the things they love and need to do possible.

Photo: Courtesy of Brianna Capozzi
The shoot with Hadid was done on a trial-and-error basis. Capozzi and her friend, stylist Haley Wollens, pre-planned and then adjusted to reach the final result based on newfound limitations and outside factors. They’d call Hadid, try something, then hang up, try it just the two of them, then call her back and try something else. “It was somewhere between very planned and very organic,” says Capozzi.

Although a shoot via FaceTime was completely foreign territory, Capozzi and Wollens threw themselves into it without looking back. “That was only one or two weeks into quarantine,” explains Capozzi, “but our emotions and minds had already changed so drastically.”

Capozzi felt limited by the framing, specifically. “You find your area with the best lighting, and then you’re stuck there, which forces you to adapt the composition of the photo. If you can figure out a way to work in that frame and that confinement, it’s kind of cool, too.” In these images, Hadid contorts herself to fill that same space in all different ways. In one, her body takes up the entire frame. In another, her feet are near the camera while her head is away to create an optical illusion with her proportions.

Alessio Albi, an Italian photographer known for his portraiture, has also been shooting many models via FaceTime. His creativity was a product of his boredom—something many of us can relate to in isolation—as there is little to no work for photographers right now, or at least in the typical sense. “I wanted to keep myself busy in a productive and constructive way,” he says.

Photo: Courtesy of Alessio Albi
His Instagram shows his range of FaceTime photography work—models shot in their houses, outdoors, even in a barn. As the photographer, Albi comes up with an idea for the composition of an image and can try to describe it, but it is then up to the model to create that image. “You have to be able to explain to the person how to frame the picture correctly,” says Albi.

When you lose the physical presence, you complicate your lines of communication. One of the keys to Albi’s photography is establishing trust with his models so they feel comfortable and he is able to communicate with them more openly. When you separate a photographer and a model by a screen, this is lessened. “It’s difficult to create a bond and to create trust with the person, to have a conversation, to create all the little dynamics that are really helpful in our profession in terms of the human aspect.”

As with so many other aspects of quarantine, the overall process has had to be simplified. Capozzi was able to text Bella Hadid and ask her if she wanted to do the shoot. “There was no middleman, which was cool,” says Capozzi. She was able to explain all the details directly to Hadid instead of feeding them to layers of people who would then finally relay it back to the model or celebrity.

Both photographers note that the quality of the image is the only thing to really suffer. “Vibewise, I feel like we were pretty in line with the work that we normally make,” Capozzi says in describing the final product. Despite limited resources, the photographers were still able to utilize the same skills they always do. Capozzi notes, “It felt like my type of shoot on FaceTime.” Albi seconds that “the difference is mostly related to the technical aspects.”

Photo: Courtesy of Instagram/@alessioalbi
Photographers simply aren’t able to recreate that photo quality when they don’t have access to the same technology (only an iPhone), so they are forced to make up for it in other ways. “The better the light, the better the quality will be on the phone,” says Capozzi. Albi notes that along with lighting, you also need to be cognizant of technical difficulty. “I need to have a good internet connection and good light to be able to create a good-looking picture,” he says.

Albi also points out that this rudimentary version of shooting forces him to go back to basics. “You have to shoot less and think more,” he says. Unlike before, they can’t rely on all of the elements a photographer would typically have in an ideal photo shoot. It’s only one person calling the shots.

Capozzi also sees a pared-down crew as a perk of these new circumstances, but in a different way. Having less people meant having less distractions, which Capozzi says allows her to divert her full focus on the creative process at hand.

Photo: Courtesy of Instagram/@briannalcapozzi
While both can acknowledge some lessons learned, neither are dying to shoot like this forever. Part of being a fashion photographer is the excitement of the opportunities. While this is a unique challenge for their skills, they both miss jetting to exotic locations and meeting people in person versus through a screen. FaceTime is obviously limiting in that sense.

“I think people are surprised that they’re as good as they are on FaceTime,” says Capozzi of the feedback she’s heard so far. Albi has experienced a little more backlash. “A lot of people are still questioning if it can be considered photography or not. I definitely think that it can.” Aside from the lack of physical presence, the process is basically the same.

“In a way it’s like taking a selfie,” says Albi. “It’s more intimate to the model because she’s in a place alone most of the time.” Audiences rarely get a glimpse of something like this, as models are almost always completely made up in a studio in a very aspirational context.

These images have a relatable quality that we are not used to seeing. “You don’t have that at all in a fashion photo,” says Capozzi. “You can’t relate to the person in it because you don’t have anything in common with them necessarily.” Now you do.

Something about knowing that Bella Hadid did her own hair and makeup before propping up a camera to shoot herself in a house, like many of us have done before or are doing now in our own fits of boredom, makes these images seem just a little better. Maybe not quite the real thing, but close.