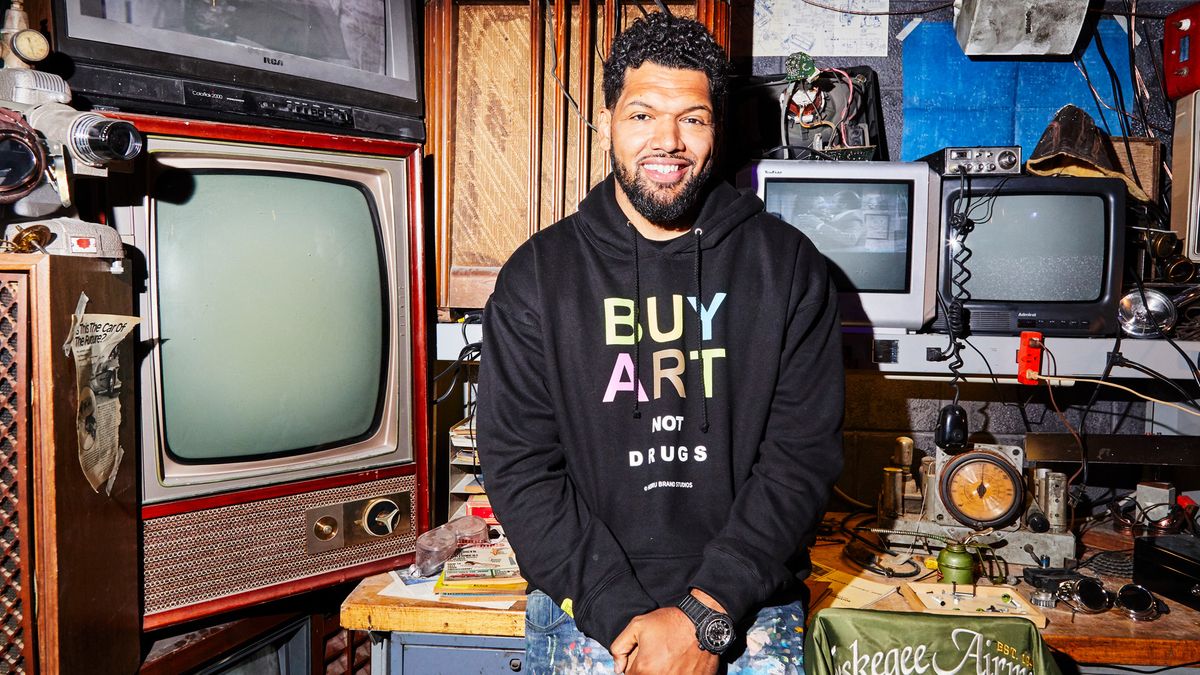 The World of Hebru Brantley Comes to Life in Chicago

The visual artist creates “Nevermore Park,” an interactive art exhibition centered on Flyboy and Lil Mama, his most prolific characters.

Barry Samaha
Amy Lombard
Hebru Brantley is surely evolving past his on-paper designation of being a visual artist, working primarily in the realm of graffiti. The tall, brawny Chicago native is now a producer, merchant, and all-around creative force with a coterie of celebrity fans and a loyal following of hypebeasts and baes. He’s a virtual modern-day Walt Disney, a cartoonist who, throughout his lifetime, built one of the biggest corporations in history, complete with several larger-than-life destinations that bring his creations to life. Brantley, in his own unique way, has followed suit.

On October 24th, he will unveil “Nevermore Park: Home of Flyboy,” an expansive 6,000-square-foot interactive art exhibition that centers around the universe of two of his most prolific characters: Flyboy and Lil Mama. “I’ve always looked at them as my Mickey and Minnie [Mouse],” the artist says to us outside the cobalt-blue building in Chicago’s Pilsen neighborhood. “They started to have resonance. People started to really respond to them in a way they didn’t, en masse, with all the others. I obviously saw something there, but I’ve always wanted to extend their narratives.”

Indeed, Flyboy and his sister, Lil Mama, have been making the rounds over the past few years, starring in several capsule collections with Bape, Bait, and Billionaire Boys Club, in addition to popping up in myriad art fairs, exhibitions, and retrospectives across the globe. The former is characterized by yellow flight goggles, green cap, white tee, and a red bandana, the latter by her pink pigtails and blue goggles. They’ve become hot commodities, recognized for their iconography and for being a black boy and black girl that go on fantasy-filled adventures rooted in Afro-futurism and Chicago street culture, particularly around the city’s South Side, Brantley’s childhood neighborhood. But what hasn’t been so apparent was their upbringing. Tidbits have been distributed from time to time, but a complete overview of how these imaginative children came to be has not been fully fleshed out. Until now.

“As the author of these paintings, I was saying what I wanted to say through the lens of these characters,” Brantley explains. “Without ever giving them a backstory, they sort of existed in space. And that grew to me actually wanting to assign them an origin.”

Flyboy and Lil Mama are, after all, the heroes of Brantley’s universe, and as anyone that reads comic books and watches their subsequent film or television adaptations knows, protagonists are only as good as their genesis. And the reason for the wait was so that these characters could first act as a general archetype, conforming to viewers and allowing them to see themselves through their vibrant frames.

“It is about being infectious from a community standpoint,” he continues. “It is about empowerment over power, and giving that power to all as opposed to one. Where most stories of this ilk focus on the singular, this one isn’t. That’s never been the design. It goes back to why I began painting these characters and the intention behind the goggles. As I was painting Flyboy, he went through different iterations. He was never meant to be the same boy. He’s a movement. He’s a sense of clarity, a sense of wokeness. Flyboy can be anybody.”

That said, it is evident that Flyboy and Lil Mama are predominantly meant to appeal to people of color that, to varying degrees, have felt belittled in mainstream media. “He’s more a voice of the youth and their angst,” Brantley says. “And I try to speak through that lens as much as possible.” Brantley celebrates urban culture instead of making it appear less-than—a quality that is central to “Nevermore Park.”

The space begins in a gallery setting, with paintings hung on pristine white walls. “That’s how the world knows me and my art,” Brantley tells us. “And then it goes into Chicago. It’s like Alice falling through the rabbit hole. It’s made up of a series of captured moments throughout Chicago history.” This is clearly visualized with a tunnel made of newspaper clippings with headlines of the then Illinois senator Barack Obama winning the United States presidency. The path then segues into a small grocery store lined with ’80s and ’90s magazines published for the black community—Jet, Essence, and Ebony—along with X-Men comic books. Following is a tinker shop with tools, knickknacks, and television screens that are playing Sanford and Son, a ’70s television series that is set in a similar worn-down environment. This room, in particular, is central to Flyboy’s origin story, as it is owned by his grandfather, a Tuskegee Airmen black military pilot who served in World War II.

Then, reality begins to blur as guests walk through an actual rabbit hole into a world of Flyboy’s imagination. Here lies an oversized version of Lil Mama, which blasts Aaliyah’s “One in a Million.” To the right is a scene of a city barbecue party, complete with lawn chairs and red plastic cups. And to the left is a kid’s clubhouse filled with toys hanging from the ceilings and flowing from the benches onto the floor. Past this is Flyboy’s crashed rocket ship, and then a mirrored room filled with smoke that is meant to give the sensation of being trapped in a cloud. There is also a subway train car that leads into the gift shop, and a garden that is tended by Flyboy and Lil Mama’s adoptive mother. The reason as to why these characters are orphans is still under development and will probably unfold when Brantley begins work on his blind script deal with Sony Pictures TV. Still, the entryway to this universe was palpable—not because it was imaginative, but because it was relatable.

From the music to the set design to logos from Batman, McDonald’s, and Pokemon, “Nevermore Park” is filled with motifs that are easily identifiable. “In terms of the curation, certain things have great resonance for me, and others are just part of the zeitgeist,” Brantley says. “It helps tell the story inside these walls. It helps people frame it and understand what we’re speaking to.” By giving Flyboy and Lil Mama traits that are ubiquitous in most urban cultures, viewers are able to form an even deeper connection and see themselves celebrated.

“My voice is more on the examination and upliftment of who we are, who we’ve been, and who we will be,” Brantley points out. “I prefer to speak on this over putting a magnifying glass on harder times, during certain moments when we weren’t allowed certain things.”

For him, “Nevermore Park” is as much a commercial enterprise as it is a form of artistic expression. It is meant to sell tickets and merchandise and be enjoyed and promoted on social channels. Brantley equates this proliferation of upbeat black visuals in the fine-art industry to the success of films like Black Panther and hip-hop artists like Jay-Z and Chance the Rapper, Swizz Beatz, and Alicia Keys (all of whom are collectors of his). To be sure, just because something is palatable and can turn a profit doesn’t make it any less worthy of serious scholarly consideration. If anything, the fact that Flyboy and Lil Mama are hot commodities shows how creators need not fit a mold to rise in the ranks of society.

“More than anything, I have this incessant need to want to become a beacon for those that are aspiring to be creative because I never had someone like me to look up to growing up,” he concludes. “There were the Warhols, Speilbergs, and Disneys, but they were never brown, never black. Very rarely was it a brother or a sister.”