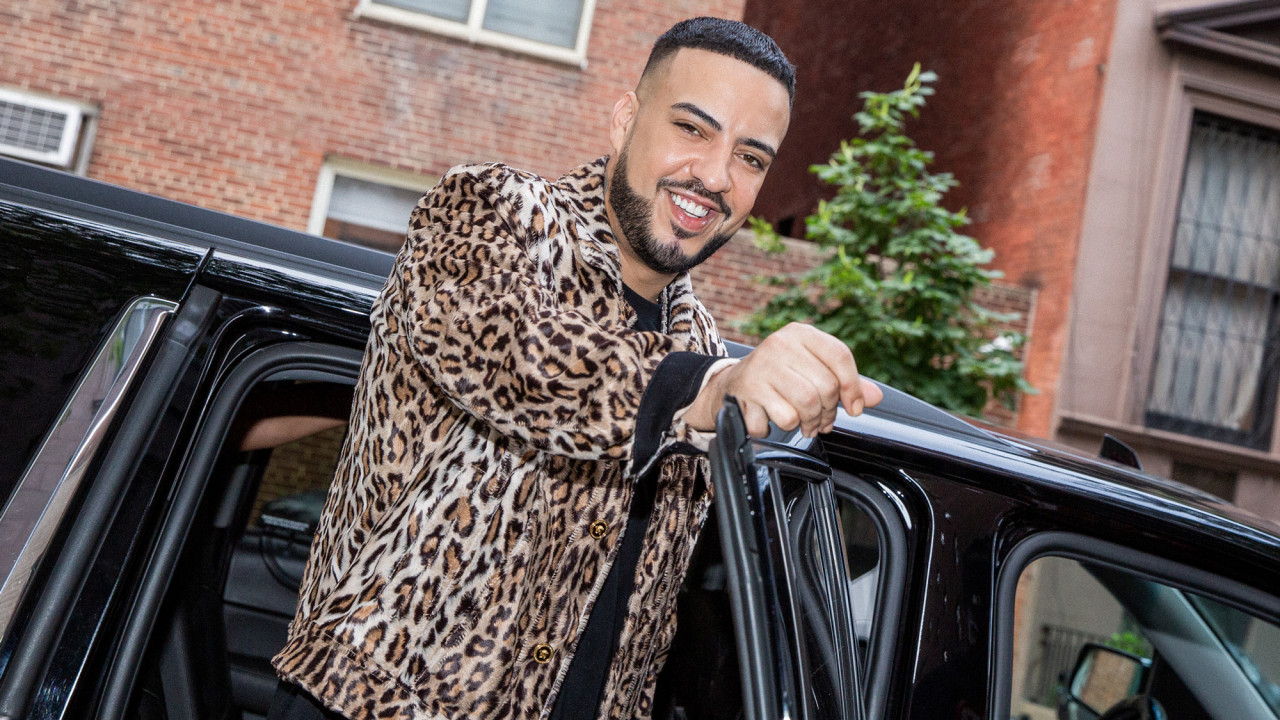 Getting Ready for the MTV VMAs with French Montana

The first thing the rapper did when he landed in NYC was call his mom.

The playlist switched back and forth between rap music and classic rock as French Montana, wrapped in a Versace robe and barber cape, sat in the middle of the room in a Midtown apartment getting his hair done. Getting ready for the evening’s VMAs—where the rapper earned a Best K-Pop Song nomination for his “Who Do You Love” collab with Monsta X—the rapper was in good spirits. As one of his own songs came on, he did a little bop, explaining to us that he was styling himself for the night, which isn’t anything new for the rapper. (Remember his hit “No Stylist”?). Dior, Gucci, Jordan, and Nike sneakers lined the bedroom walls, while Versace pants and Burberry blazers hung nearby. In the end, French went with a full Versace ensemble of a black t-shirt, jeans, and a leopard-print jacket. The shoes were Valentino and, naturally, a massive Avianne chain glistened around his neck, complementing the bracelet and Audemars Piguet on his wrist. The perfect outfit for the VMAs red carpet, if you ask us.

His vibe when getting ready:
“Just making sure I look right. I’m focused and wavy, of course, gotta always have the right vibe. [Before a red carpet] I make sure I’m in a good mood. Positive vibes are always important; I want to make sure I’m putting out the right energy.”

His go-to playlist:
“Anything old-school, my latest mix tape with Max B, Coke Wave 4, [and] my new album that’s coming later this year.”

The outfit:
“I always have a few outfits laid out and decide at the last minute. Right now it’s a few Versace things, a few Saint Laurent, a big Dior jacket, and some Burberry vibes.”

The one thing he always travels with:
“My music. I can’t live without it.”

First thing he does when he gets to New York:
“Call my mother, of course.”

Who he is most looking forward to seeing:
“Myself [laughs]! Nah, I also love Sebastian Maniscalco, he’s hilarious.”

How he celebrates a win:
“[I] take time and appreciate how I got that win, where I came from, how hard me and my team worked to get there. And then, of course, we party…”

After-party plans:
“You never know! Wherever my friends are.”

What we can expect to see from him this year:
“The best music I’ve ever made.”

How 6lack Preps for the MTV VMAs
Stylish Couple Alert! Getting Ready with GoldLink & Justine Skye
We Got Ready with Jay-Z & Beyoncé’s Tour Photographer, Raven B. Varona, Last Night