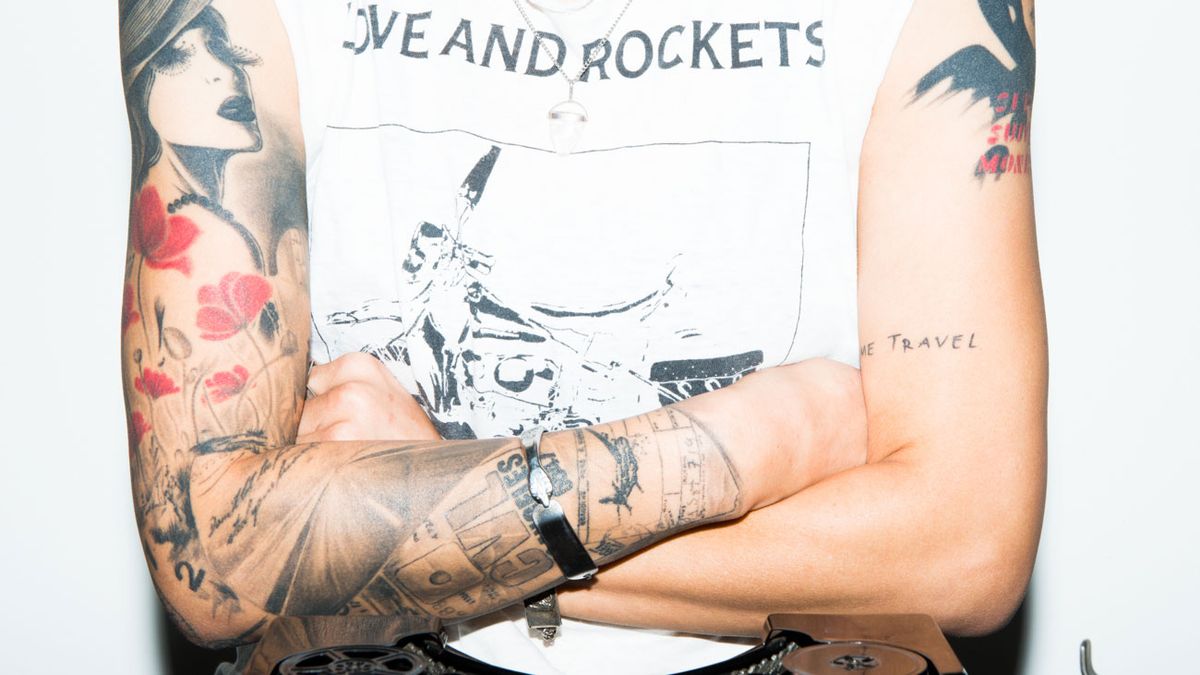 What 4 Female Tattoo Artists Have to Say about “Tat-Calling”

The type of harassment you never knew existed.

Hannah Baxter
As amazing as it is to live in a city like New York or L.A., there are, unfortunately, a few things that women have to endure when we step outside our doors. Specifically, street harassment—the unwanted attention from strangers, especially men, in the form of lewd comments, whistling, and general disruption from being a human being out in the world. Now that the warmer weather is fading, and as a result we’re tucking our shorts and sundresses into the back of our closets, catcalling tends to fade. However, some women aren’t able to abandon the things that provoke harassers into making them feel uncomfortable, violated, and angry—those things being their tattoos.

Being heavily tattooed is a common sight on busy metropolitan streets, but for those who aren’t rocking full sleeves or a bodysuit, it’s hard to imagine how often women with tattoos are subjected to “tat-calling.” As a moderately tattooed woman myself, I’ve had strangers barrage me with questions on the train and even grab my arm to examine the intricate flowers and leaves that cover my tricep, wrists, and forearm. Of course, asking someone in a bar about the rad piece she’s poured time and money into is sometimes welcome, but the stares and unwanted commentary in the middle of an afternoon are an uncomfortable burden to bear. Having tattoos doesn’t warrant harassment, just as wearing a short skirt does not mean you’re interested in sexual advances. I wouldn’t trade the artwork on my body for anything, and any woman who loves her tattoos should feel free to live her life without wondering what type of attention she’ll receive on any given day.

Without more tattoos, I can’t feel the full effect of constant tat-calling, so I turned to some of the industry’s most talented artists to ask how their heavily tattooed appearances affect their daily lives.

When I started getting heavily tattooed, I knew that there was going to be some unwanted attention, but at the rate that I’ve gotten it now, it’s just overwhelming. It’s just like, ‘Are you joking?’ People don’t understand common sense or personal space, or what’s rude and what’s not rude. It’s kind of ridiculous in that whole realm of being a person, walking down the street, or in your car or at the store. You’re going about your life, you’re not interrupting anyone else. The most common is when you’re walking by [a group of men], and they’re all standing around doing nothing, but then they’re like, ‘Hey, girl with the tattoos! Where do those tattoos go?’ Catcalling and tat-calling, it’s like one and the same. I think it’s more so [that] people fetishize tattoos and women with tattoos, especially heavily tattooed women, as being like freaks... I’m just a normal girl. At least I like to think that I am [laughs]. I just look kind of crazy, that’s all!”

“I’ve been heavily tattooed since 1987, so [for] three decades I’ve had to put up with tat-calling. If someone says, ‘Nice tattoos,’ and they say it like ‘Nice shoes!’ I say thank-you and just walk on by. But if they say it like ‘nice ass, nice tattoos,’ I don’t talk. Never, ever engage people [like that]. [They’re] treating you like you’re an object—why are you engaging with them like they’re a human being? I would say the times that it’s really bothered me have been when it’s an authority figure. I’ve had cops say, ‘Come over here,’ and I’m [thinking,] ‘Oh my god, what did I do?’ and [they’re] like, ‘I just want to look at your legs.’ There’s some things that people say that just float right by, but the words are almost less intrusive and scary than the eyes. Especially from men when you’re in an elevator and you can’t walk away, or when you’re on line to get something; you just feel the eyes. When there’s just dead stare, that’s never appropriate. We’re just regular people who’ve put art on our bodies.”

“I’ve been heavily tattooed for almost two decades, [and] even though I live in NYC and heavily tattooed women are not super rare here, I often find myself wearing headphones so I don’t have to acknowledge commenters. Some people are actually really kind, but others just seem like creeps. I was sitting alone on a stoop in Soho a few summers ago, and this well-dressed man and his family walked by. They were all staring, but he looked disgusted by me. Out of nowhere this man starts yelling at me in Italian. I couldn’t understand exactly what he was saying, but it was clear he was pissed off about my tattoos. I was pretty shaken up by the whole experience. I totally get that tattoos are very interesting to look at. I often find myself sneaking looks at heavily tattooed people, [but] I very rarely comment on people’s tattoos because in most cases, it makes me uncomfortable when people comment about mine. I almost never leave the house without a long-sleeved cover-up. I chose to be heavily tattooed, and I assumed there would be unwanted attention as a result, but I misjudged how much. It would be great if our society stopped commenting on women’s bodies and appearance in general, but we aren’t there yet.”

Tattoo artist by appointment in L.A.

“Very recently, a couple of guys were talking about me, saying that they needed more tattooed girls in their shops because that’s what ‘guys wanted to see’ [and] supposedly tattooed girls are extremely sexy... They were talking about me and being disrespectful, without hiding it, just a few steps away. Some people believe that if [someone’s tattoos] are exposed to the public, it’s because we want to get attention. That’s not the case; not for me, at least. Others are just curious about the art or the pain. Personally, I don’t mind answering some questions if they’re nice, but sadly it’s not like that all the time. I have to admit that some days I’m just not in the mood to deal with strangers’ comments, so yes, I prefer to cover them. But most days I love to show my body art. You have to focus more on the good feedback than the unwanted comments. Some people can have bleached hair, a different way of dressing, different taste of music, etc. We have tattoos—that’s our way to express ourselves, and it is not in any form an invitation to comment or touch our bodies. Be aware of your actions. Try to be a better human, always.”
More From the series Living