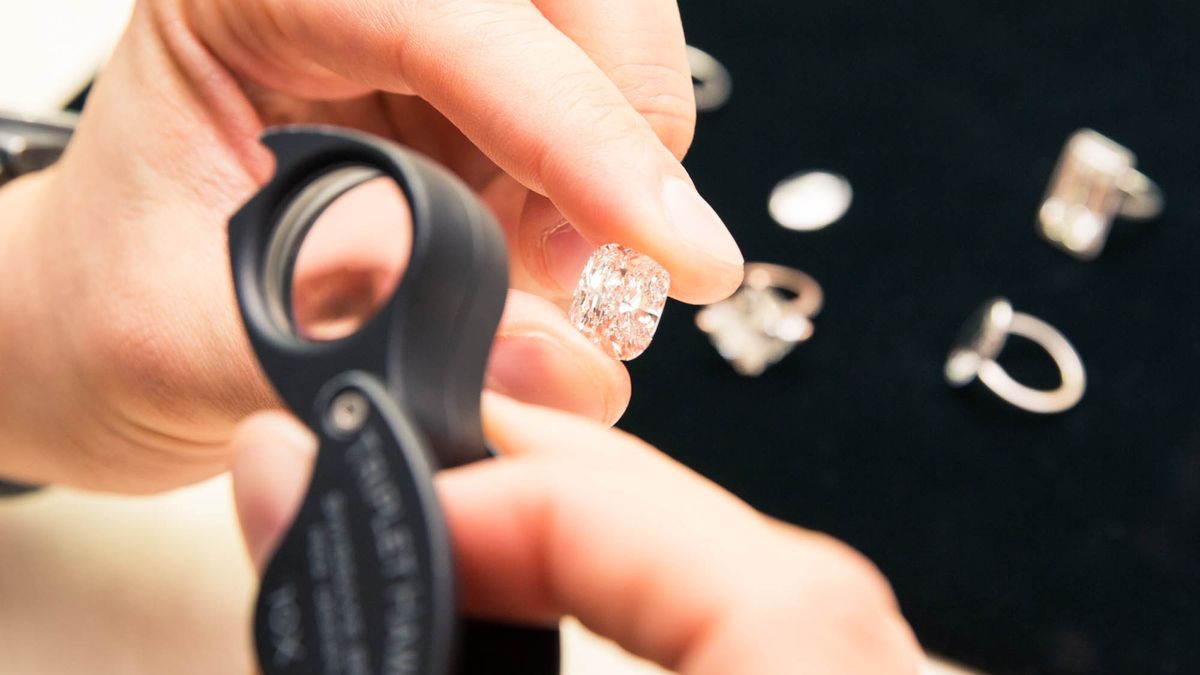 Diamonds So Big They’ll Blind You

We sat down with Lorraine Schwartz’ President of Production to chat diamond rings.

Jodi Taylor
Alec Kugler
Unless you’ve been hiding under a rock (and we’re not talking diamonds), you’re familiar with Lorraine Schwartz. One of her ahem, more notable stones has been very much in the news lately. We were lucky enough to sit down with President of Production at Lorraine Schwartz, Justin Cohen, to get a rare, up close and personal look at some of the incredible diamonds he works with on a daily basis. It’s not common to get such a special BTS look at these jewels, and we did not for one second take it for granted (we were pinching ourselves practically the whole time).

It’s no secret that Lorraine Schwartz is a celeb go-to for both engagement and wedding rings, as Cohen casually told us, "when Kim Kardashian wore the cushion cut we got a lot of phone calls because people wanted that shape. [Same with] Blake Lively with the oval shape, [and] Beyoncé with the emerald cut’." Cohen, who buys, sources, and acquires the diamonds (along with other precious stones) says he finds cutting a diamond from rough start to shiny finish therapeutic. With eight to nine years under his belt at Lorraine Schwartz, this man knows a thing or two when it comes to choosing the perfect cut, so consider this your 101 guide to finding the *perfect* diamond.

“The cushion cut is my favorite—I like them especially when they’re a little longer. They’re an older cut—they were one of the first cuts, because if you think about it, the round is one of the first ones and then it kind of transforms into a cushion. It has natural progression making it a little different, making the stones a little longer. They’re usually square—old cushions look almost like rounds, but I always explain it as a pillow top.

“An older cushion cut would have less facets. If you look at a diamond carefully, there’s all these little cuts in it and that’s what they call facets. An older cushion has less facets, they’re a little less ‘brilliant,’ they’re a little less sparkly. Brilliant refers to the amount of sparkle that it has—rounds are brilliant cuts, pear shapes are brilliant cuts.”

“Emerald cut is completely different than cushion and actually anything else because of its step cuts. If you look at it carefully, they have long lines in them and longer facets which makes it less brilliant. The Emerald cut is a specific taste because when someone is thinking about a diamond, they’re thinking about how sparkly it is, how much light is hitting it, and how much brilliance comes from it, so in an emerald cut is completely different because they have a different type of sparkle. When the light hits the facet there is less dispersion inside it because there are less facets.

“This particular oval is completely different and out of the box. An oval is the shape of the stone, but the cut of this style is a rose cut. It’s not a full cut diamond, there’s no bottom to it—it’s completely flat and domed on the top. There’s facets on the top and on the bottom there’s one long, big facet which makes it flat.

“The oval is definitely a shape that people request. A rose cut is not as typical. We do rose cuts for engagements all the time but it’s much different than typical because it has less brilliance—it’s much more elegant, because it’s down played much more. It’s not in your face; it’s more low key. It’s one of those types of shapes where if you know, you know.”

“We have done heart shaped engagement rings in the past [but] it’s not typical. A lot of people like them as pendants, but a heart shape is very sensual. It’s more personal I would think because it’s not for everyone, but it is very unique, especially for an engagement ring. Most people in the world are classic and traditional in their approach, but that’s why they come to us because we’re not your classic jeweler, we’re out of the box type of jeweler.

“A lot of times you don’t really think of what diamonds are capable of, because you don’t see it, you can’t visualize it until you’re here in person looking at a ring and you fall in love with it. A heart shape is completely outside the box, but it is fun. It’s not as fun as let’s say the rose cut, the oval rose cut, but I think it’s more sensual. It has a feel to it—it’s a completely different look than anything else.”

How Diamonds Are Traded

“Parcel paper is the way the diamonds are traded all over the world. A rough diamond comes in that way and a finished polished diamond leaves that way, in the paper, which is the most amazing thing to me because it’s so ancient, the way diamonds are traded still. You look at diamonds on white paper because that’s when the color comes out the most.”

How to Buy a Diamond
Dream of Being Covered in Diamonds? Call Greg Yuna
Grills Aren’t a New Trend, But They Are an Exciting One
Jewelry
More From the series Fashion