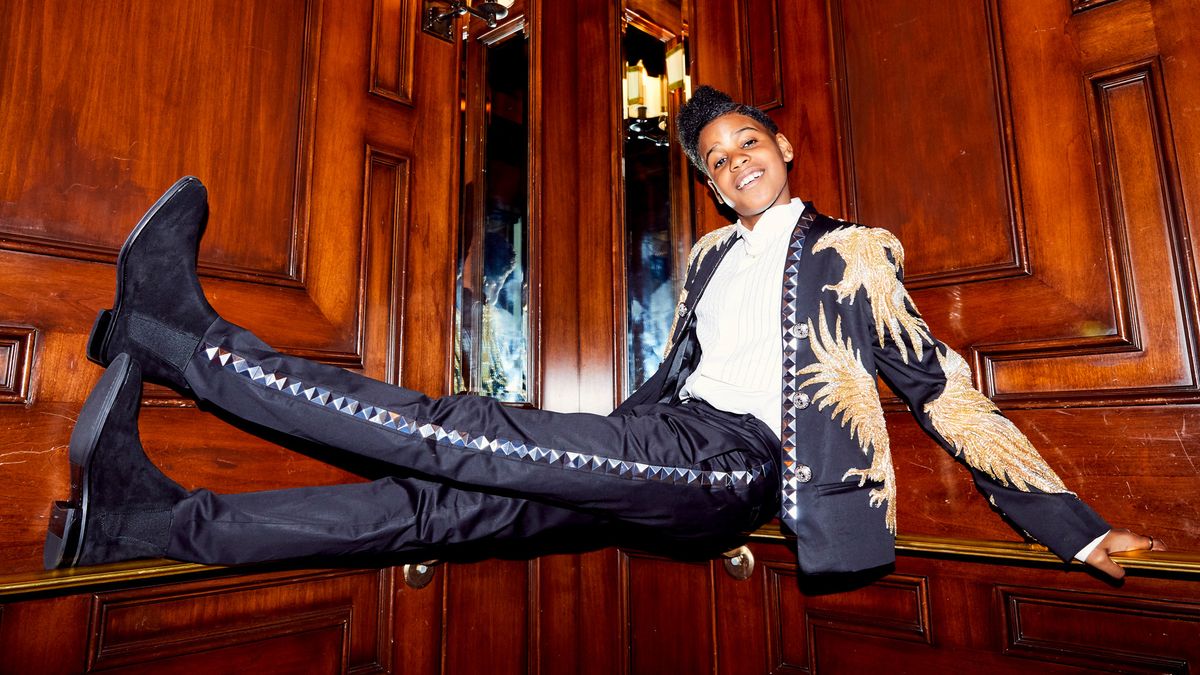 The Lion King’s JD McCrary Gets Ready for the Spotlight

Disney’s Young Simba prepped for his big premiere with Balmain and Beyoncé.

Jazzi McGilbert
Tristan Kallas
A lot of music emanated from JD McCrary’s fifth-floor room at the Montage Beverly Hills, but “Can You Feel the Love Tonight?” might sum up the mood best. It was all love, laughs, and a full-on family affair for his big red-carpet moment at the Lion King premiere. McCrary, who plays young Simba, yelling from the bathroom for some fatherly hair advice (his dad is his lifelong barber); his brother Josh (who also has a cameo in the film) chilling on the bed watching Minecraft videos; Mom getting the star treatment in a makeup chair (she looked like a queen in Pat McGrath’s Mothership II palette); even Auntie Shante got in on the fun!

All the stars aligned when McCrary teamed with stylist, social activist, and star in his own right Ugo Mozie and the “Balmain Army” five-star general Olivier Rousteing. Together they created a showstopping bespoke suit covered in over 70 hours of Balmain’s signature beadwork and studs. In his Jidenna-inspired side-slicked hairstyle and intricate gold-winged epaulettes, it’s safe to say: JD looked fly.

Since the Balmain was locked in, McCrary and Ugo spent their time fitting looks for the rest of McCrary’s whirlwind press tour. We got a little runway show as the young actor and singer danced out of the bathroom (kid’s got moves!) in jerseys and bomber jackets pulled from Ugo’s eclectic selection. “Mister Ugo is the man!” McCrary tells us. “When I first met Beyoncé, I was wearing something that he made, so I trust him completely. He always brings the dopest fits!”

The young entertainer hails from the valley and is immensely talented, yet he’s escaped every L.A. child-star trope. He’s incredibly polite—calling everyone “mister” or “miss”—plays Agar.io on his iPhone during fittings, stays fueled by room-service pizza, and cracks jokes about losing teeth and his cracking voice. (Puberty is nigh.) He’s only 11 (“Twelve in nine days!” he reminds us), but McCrary has been waiting for this moment for years. Like all of us, before yesterday’s premiere, he hadn’t seen any Lion King footage aside from the epic trailer after he was announced as Young Simba in 2017. Before he hit the red carpet, he was most excited to finally see the film and reunite with his castmates, including “Miss Beyoncé,” naturally.

The only downbeats of the evening came when the music stopped because Dad’s phone was ringing off the hook. That was quickly rectified with a little Chris Brown and JD’s own hit, “Stole My Heart,” produced by Jermaine Dupri. Mark our words: This Cancer is a rising star—and we wouldn’t be surprised if there’s more than a little Leo in young Simba’s chart.

More on McCrary’s style, premiere look, and family ahead.
1 / 24
“I’m gonna have a part in my hair and slick it down. Jidenna was the inspiration—I’ve liked his hair for a while.”
Want more stories like this?

Ebonee Davis Talks Saving the Planet, Natural Beauty, & Why She Buys Her Jewelry in Harlem
Inside Karamo Brown’s Emmys-Pre Game and Red Carpet Makeup Routine
Getting Ready with Alex Morgan for the Time 100 Gala
Film &amp; TV
Part of the series: