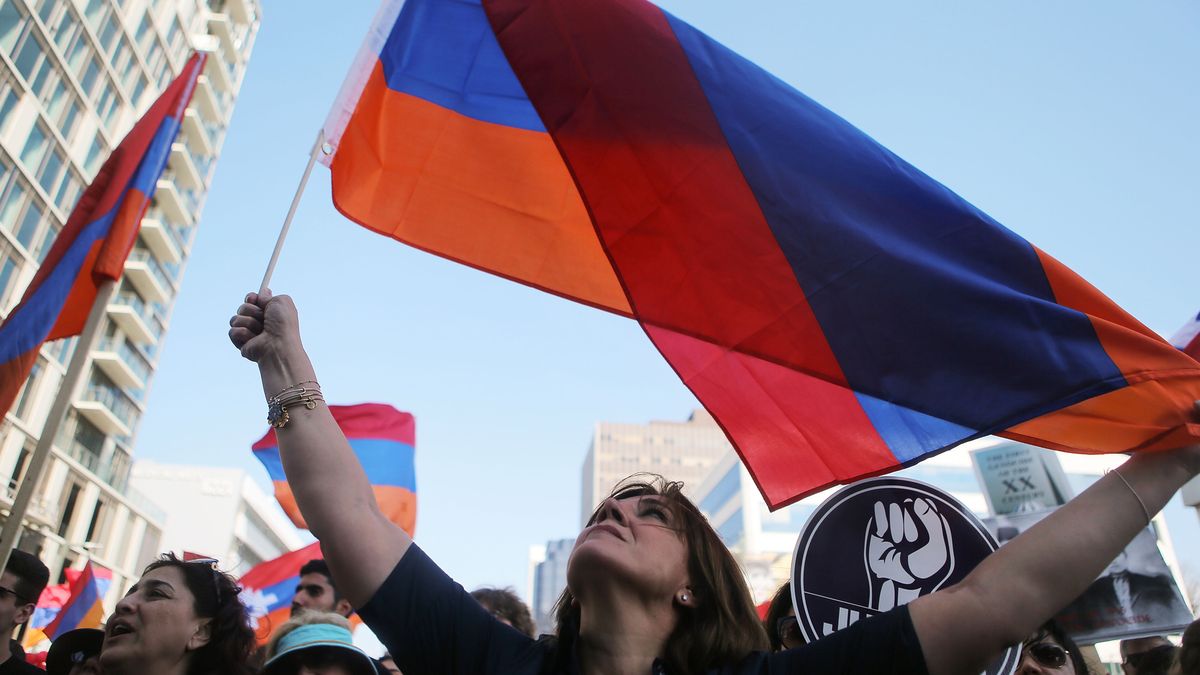 Valeriya Chupinina
To sum up what being Armenian means in one story is an extremely difficult thing to do. For me, it’s the undeniable super strength of my great-grandmother, who somehow made it to Azerbaijan while the rest of her family did not survive. It’s the delectable food, the joyous people, the lively traditions, and the devotion to family—all markings of Armenian culture to me. Even great eyebrows are near the top of my list.

We’re a strong people with an even more resilient history, one whose most significant centennial was commemorated nearly four years ago. This was the 100-year anniversary of the beginning of the Armenian Genocide, more commonly known as Red Sunday, the day the authorities of the Ottoman Empire deported almost 300 Armenian intellectuals from Constantinople—or modern-day Istanbul—to Ankara, where most of them were eventually murdered. During and after World War I, the Armenian male population was massacred or put in labor camps. Women, children, and the elderly were led on death marches to the Syrian desert, where 1.5 million were killed.

Eventually, this genocide ended with the surrender of Turkey in 1918 and Armenia becoming part of the Soviet Union. However, Armenians were displaced all over the world in a large diaspora, where they created their own communities. They built lives and remembered their past. Regardless of exile, the losses they endured, and leaving their home behind, they remained courageous. Survivors of this event passed down their influential stories to their families, and many of them are now tenacious, intelligent, and cognizant of their history. We live in America, in France, in Iran, in Lebanon, and all over the world. We make sure this day is celebrated every year so that the struggle of our ancestors is never forgotten. We stand with the others who have been unjustly abused because of their race, religion, or sexuality.

I spoke to four incredibly successful Armenian women who work in the fashion industry about their families’ histories, what being a descendant means to them, how they carry on traditions, and how the diaspora brought them to where they are today.

The first adjective that comes to mind when I’m asked about our people is “strength.” The second is “unity.” To me, being Armenian means recognizing where I come from, what my ancestors have fought for, what my parents have stood for and taught me, what my nation has instilled in me, and even from a distance: pride, understanding, kindness, respect, generosity, and the importance of family and tradition.

My parents made sure I didn’t forget the language or distance myself from our culture and traditions from an early age, since I was only two when we moved to Barcelona. I speak the language, read, and write. My family and I still celebrate all major holidays together when possible, and I travel back to the homeland at least once a year.

My parents were quite young when we moved to Barcelona. The transition wasn’t difficult for me, but for my parents, since they were starting a new life. We lived in Spain for fourteen years; we all fully adapted to the new life but remained true and close to the homeland every way we could. After my brother was born and diagnosed with autism, we decided to seek better help for him in California, so we left everything behind and moved once again. This time it was harder for me, since I was 16 when we moved, but I adapted to the U.S. pretty quickly. Living in such contrasting cities my whole life brought innumerable lessons along, but witnessing that level of sacrifice and diligence from my parents is the greatest life lesson of all.

We are a very small community. When I meet another Armenian, I feel like I am meeting someone from my extended family. I can find a way to connect myself to almost any other Armenian. It’s an identity that bonds us. It goes beyond culture and religion.

Everyone in my family has an Armenian name. I think that is a common tradition, as many Armenians that I know have these special names. When I was young, I went to an Armenian school until fourth grade, where I learned the foundations of the language and cultural traditions. My family spoke Armenian at home, enough for me to have an understanding of the language, but I am still learning and getting better. It is important to me that my children be raised knowledgeable of Armenian culture. I even hire nannies that are fluent in Armenian, so my kids have learned the language quickly.

My family is from Turkey. My grandparents were born in Turkey during the genocide. My grandmother has shared her story with me, and the challenges of being an Armenian woman living in Turkey during that period. You had to disguise your heritage, we even had to change their name from Zambakyan to Zambak.

My family is not typical diaspora: When most people were leaving and escaping Turkey, my family stayed. They endured the aftermath of staying in a country where Armenians were unwanted. My parents came to the U.S. by themselves in the ’60s in search of a better education. But even today, when we visit Turkey, my mom feels uncomfortable telling people that we are Armenian.

To me, being Armenian is being the product of people who fought for centuries to keep our heritage and traditions alive. Having read our history and, of course, knowing the genocide we endured, it makes me feel proud to know that strength, courage, and resilience runs through us now. I could go on and on about this, but trust me when I say we are a people deeply rooted in our history and kinship.

Absolutely. Whether it’s our customs at Armenian weddings or the Christmas that we celebrate on January 6, my family has always held on to certain traditions.

Most of my family is from Iran; both my parents were born and raised there. There’s a big Armenian population in Iran, and though we share some cultural similarities with Iranians, we very much identify as Armenian. I was born in Tehran during the revolution in 1984, and when I was two years old my parents decided it was time to make the journey to the U.S., where I’d have better opportunities. We ended up moving to Greece for a little over three years while we waited for the paperwork to be done, and in 1989 we moved to America. We settled in Glendale, where there’s also a big Armenian population. It just doesn’t feel like home to not live among one another.

Being Armenian to me starts with the way our food brings us together. We are an ancient nation with a rich culture rooted by our 2,500-year-old history, and the strong community we have built and rebuilt through time is full of character, strength, and loyalty. We always love to feed anyone that comes to our homes. We have strong family values of unconditional love for one another.

To me, Armenian tradition is really a method of life. It’s in the small things in our daily lives like keeping pita bread at home or always having nuts close at hand, etc. Other than that it’s about the respect of the family and the connection with one another.

Describe your family’s history/journey through the diaspora:

My grandfather’s side was from Turkey and escaped the genocide by fleeing to Aleppo, Syria, where my father was born. They moved to Los Angeles in 1968, and my father came later in 1971. My grandmother’s side was also from Turkey, and they survived the desert marches during the genocide and ended up in Lebanon, where my mom was born. My mother and grandmother came to L.A. in 1976 escaping the civil war in Lebanon. My parents met in L.A., and I was born here in 1979.