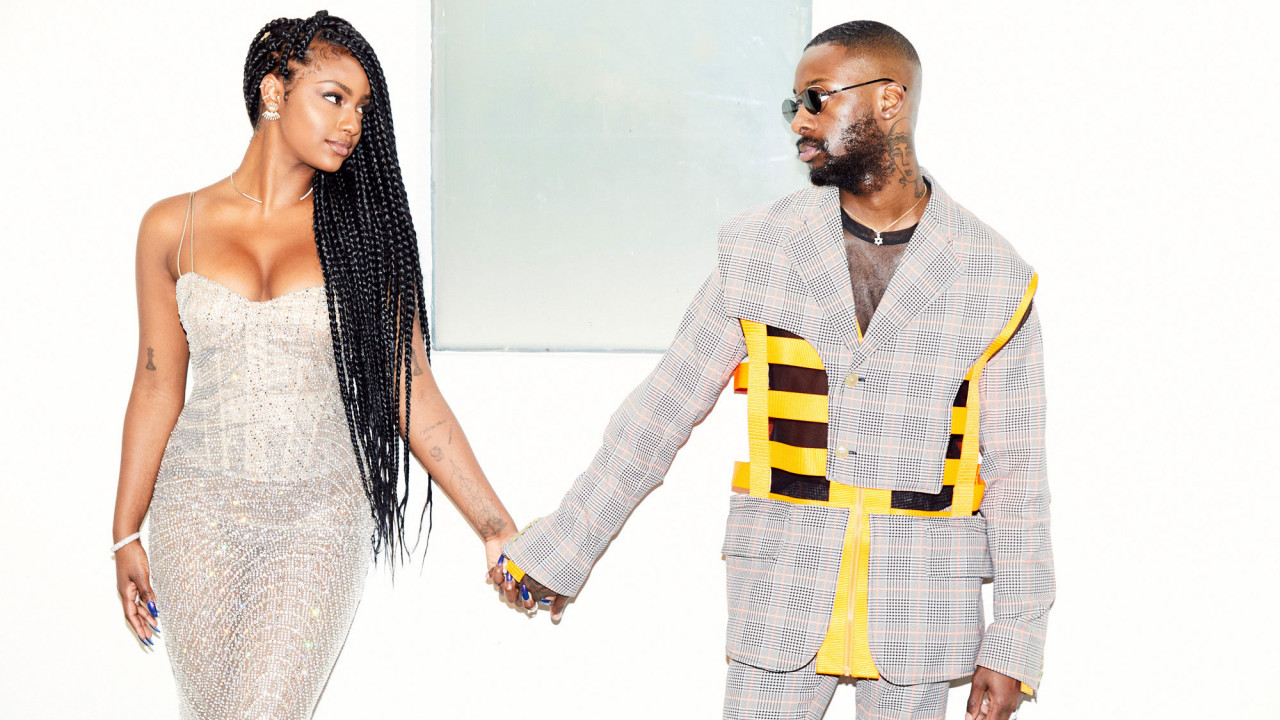 Stylish Couple Alert! Getting Ready with GoldLink and Justine Skye

Ahead of the 61st Grammy Awards.

When we walked into the living room where GoldLink and Justine Skye were set to get primped and prepped for the 61st Grammy Awards, you would never have guessed that the two were hitting the red carpet in a few short hours. They were hanging on the couch, chatting with friends as the Lakers game played in the background, without a hint of nerves in the air. To be honest, it was a pretty ideal Sunday setup. But within 30 minutes, the two artists, accompanied by their mini entourages, had dispersed throughout the home, Skye getting glam done on one side, while GoldLink narrowed down his outfit choices (he had 10 in total—we counted) on the other.

A few hours of music pumping throughout the house, one or two ginger beers, and a living-room dance party later, the two were ready to walk out the door. Skye sparkled in a floor-length custom Roberto Cavalli dress and had beautiful long braids grazing her back. Right next to her, GoldLink rocked a grey-and-orange mesh cutout Walter Van Beirendonck suit matched with the Margiela Tabi boots because, well, this is the biggest night in music.

GoldLink: “[My outfit is] a full-on Walter Van Beirendonck look with the Maison Margiela Tabi boots pulled by Lucas Crowley.”

GL: “Lucas and I decided to make another crazy statement, but in a completely different way this time, [so] that we stay ahead of the curve as always.”

GL: “I’m mostly looking forward to the Best Rap Album of the Year category because my favorite two homies in the game got nominated— Pusha [T] and Nipsey [Hussle]. I’m excited to see the outcome.”

Justine Skye: “I’m wearing a beautiful, custom Roberto Cavalli dress. I wanted to wear something classic but still eye-catching, and when I tried this dress on, it was perfect.
“There were a couple runner-ups, but this one really made a statement! ‘Watch out, Imma bad bitch and I’m coming for ya!’ [laughs].”

JS: “I’m really excited for the performances! I’ve watched them from the screen since I was a little girl, and now I get to see it firsthand. It’s going to be pretty dope.”

The best thing about Grammys weekend:
GL: “I love catching up with friends I haven’t seen all year and congratulating them on what they accomplished.”
JS: “My favorite part is getting dressed up, always!”

The story behind the making of the Grammy-nominated “Like I Do”:
GL: “So Anderson Paak was on the reference track initially, but couldn’t appear on the record, so my A&R at RCA, Derrick, thought I’d be a great fit for the track. I [cut] the verse a day later, sent it back, they loved it, and voilà! A pop hit and a Grammy nomination came out of it.”

GL: “I woke up early on the day of the Grammy nominations on accident—didn’t really know what was going on. So I’m checkin’ the nominations, I attempt to fall asleep again, and then I get a call saying, ‘Congrats on your nomination!’ I was a little confused [laughs], but was very thankful to be recognized again in the same category.”

GL: “I called my mom first [after finding out]. Then all of my friends after.”

GL: “I didn’t get to work with [Christina Aguilera] on the record in person, but she was really easy to communicate with about what they were looking for from my vocal performance. She’s a legend and a lifetime artist, so it was an honor.”

The first thing he’ll do if he wins:
GL: “Thank the God I serve and keep it pushing. Back to the studio tomorrow.”

The getting-ready vibe:
GL: “Just a chill family vibe with all the people I love. We treat it like another day. No pressure.”
JS: “Typically it’s chill, but sometimes it can be pretty hectic, especially if we’re having a malfunction. For the most part, I’m cracking jokes with my glam team and probably eating food I shouldn’t be eating before getting into my outfit.”

Favorite songs of 2018:
JS: “I honestly can’t remember any songs off the top of my head. But I do know that ‘Build’ by Justine Skye was a banger, she really DID THAT!”

Drink and snacks of choice:
GL: “I drink water. All the time [laughs].”
JS: “I always gotta have a matcha latte on deck—gives me the energy I need and just love the taste. That’s really it. I mean, however I’m feeling that day is what I order. It’s never really a snack though, it’s more like a whole meal.”

Skye’s glam for the night:
JS: “Well, I have box braids. [I] wanted to bring a different vibe than I normally do. The makeup is going to be clean [and] classic, but glowing! I love for my skin to be at extreme levels of glow.”

JS: “My go-to scent is this roll-on oil I use called Child. Smells like gardenia, which is my favorite, and it’s easy to carry.”

Three things you’ll always find in her bag:
JS: “You can always find my Fenty lip gloss, my Kiehl’s hand cream, and gum [or] mints. Gotta have fresh breath.”

The one song that will always get them on the dance floor:
GL: “Any Sean Paul song.”
JS: “‘On the Low’ by Burna Boy.”

What we can expect to see in 2019:
GL: “Something very exciting. Growth, evolution.”
JS: “You can expect new music! Some acting, and many more things I can’t tell you about now, but 2019 is going to be a great one.”