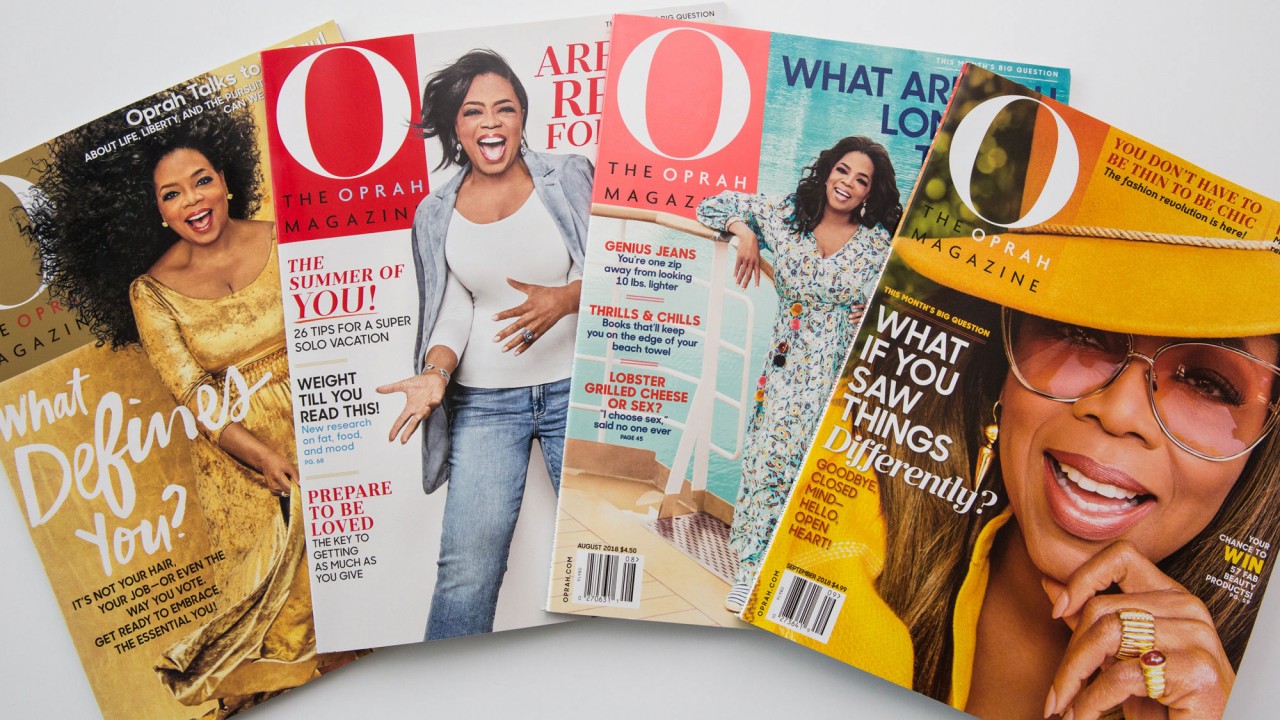 Lucy Kaylin gives us a glimpse into a day as Oprah’s right hand.

Print is not dead. Sure, the landscape has shifted to digital media, but the craving for tangible glossy paper printed precisely with exhaustively edited words still lingers. You know the feeling! And Oprah Winfrey knows it too. Which is why she nabbed Lucy Kaylin—a Vogue, GQ, and Marie Claire alum—for the top spot of O, The Oprah Magazine. Since taking the reigns as editor-in-chief in 2013, Kaylin (along with her fleet of editors) has filled the pages with quirky, entertaining stories all while encouraging readers to participate in conversation on tough topics—especially in the current political climate—and stacked a Rolodex of experts to cover a myriad of subjects with a strong voice of accountability. She also recently launched the sparkly OprahMag.com. It’s a big, fun, and sometimes hectic job. Which is why a genius Post-It hack and a clever email MO are her secrets to making it all happen. Here, we talk with the EIC on her early career challenges, how the O staff are surviving the changing publishing landscape, and the power of a great glass of wine with girlfriends to unwind. 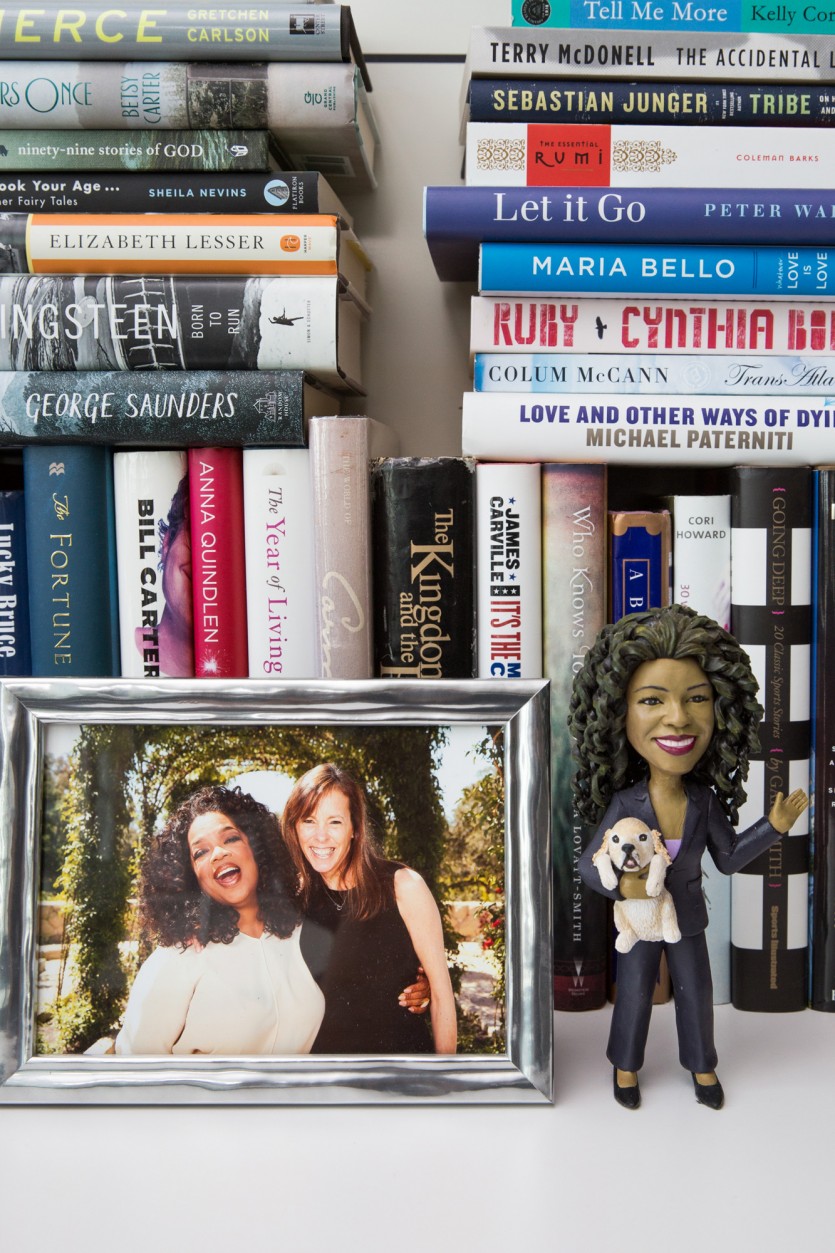 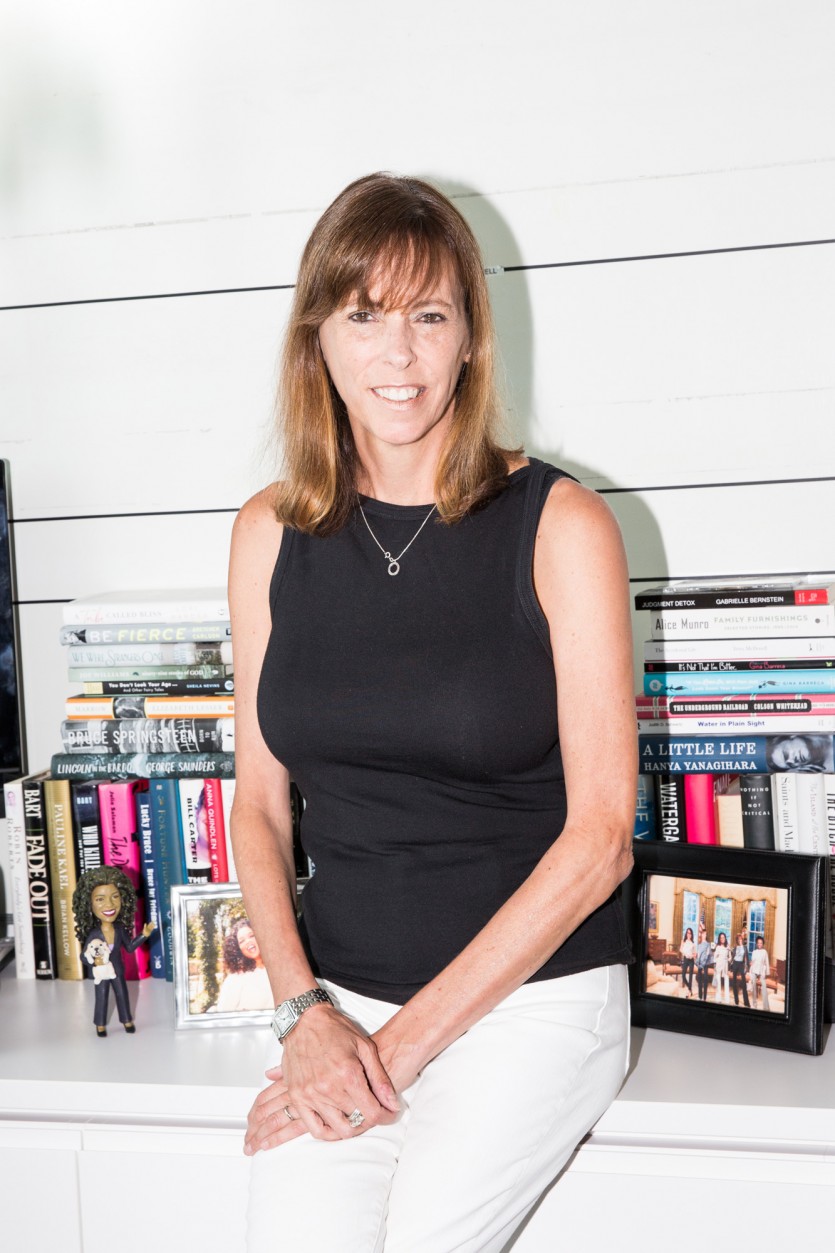 The path that led her to the top spot at O magazine:

“After getting my master’s in English literature, I found my way into magazines. I started as a fact-checker at Vogue. I hadn’t been much of a magazine consumer, but I assumed the work would require skills that I had: the ability to write and think quickly. I found Vogue to be a tough place to be—a sensibility that wasn’t really mine. I certainly did see what would be really cool, fun, and wonderful about magazines. I was incredibly drawn to the people that were working at magazines—very smart, funny, well-informed, opinionated people.

“I wanted to try to find a job that I’d be better suited for, and I was able to get a fairly entry-level job at GQ. They gave me assignments right away, and I had terrific mentors there. I just loved GQ, it was such a great sensibility match for me. I think I wrote over a hundred articles for the magazine. I was a staff writer, senior writer, special correspondence, and I ended my time there as features editor—that was an incredible opportunity for me to see other possibilities beyond being a writer.

“I realized I had a lot to give as a mentor and as an editor, and that put me in a position to become the number two to Joanna Coles at Marie Claire. I left GQ after 19 years—that was an opportunity I couldn’t resist. This incredible person wanted me to run the engine room at Marie Claire. I stayed there for a few years and then became the number two at O [magazine]. I just loved Oprah, as most of us do, and I love the message and the mission. I love the emphasis on good writing at the magazine. Even though it’s a big magazine, it’s able to have a certain quirkiness about it and a lot of voice, and Oprah is certainly one that’s very creative and takes chances.

“Once Susan Casey, my boss, the editor-in-chief, was ready to head off and work on her book (which she is quite wonderful at—writing best-selling books about the natural world, the ocean life), that’s when I got the top job, and that’s where I’ve been for the last five-plus years.” 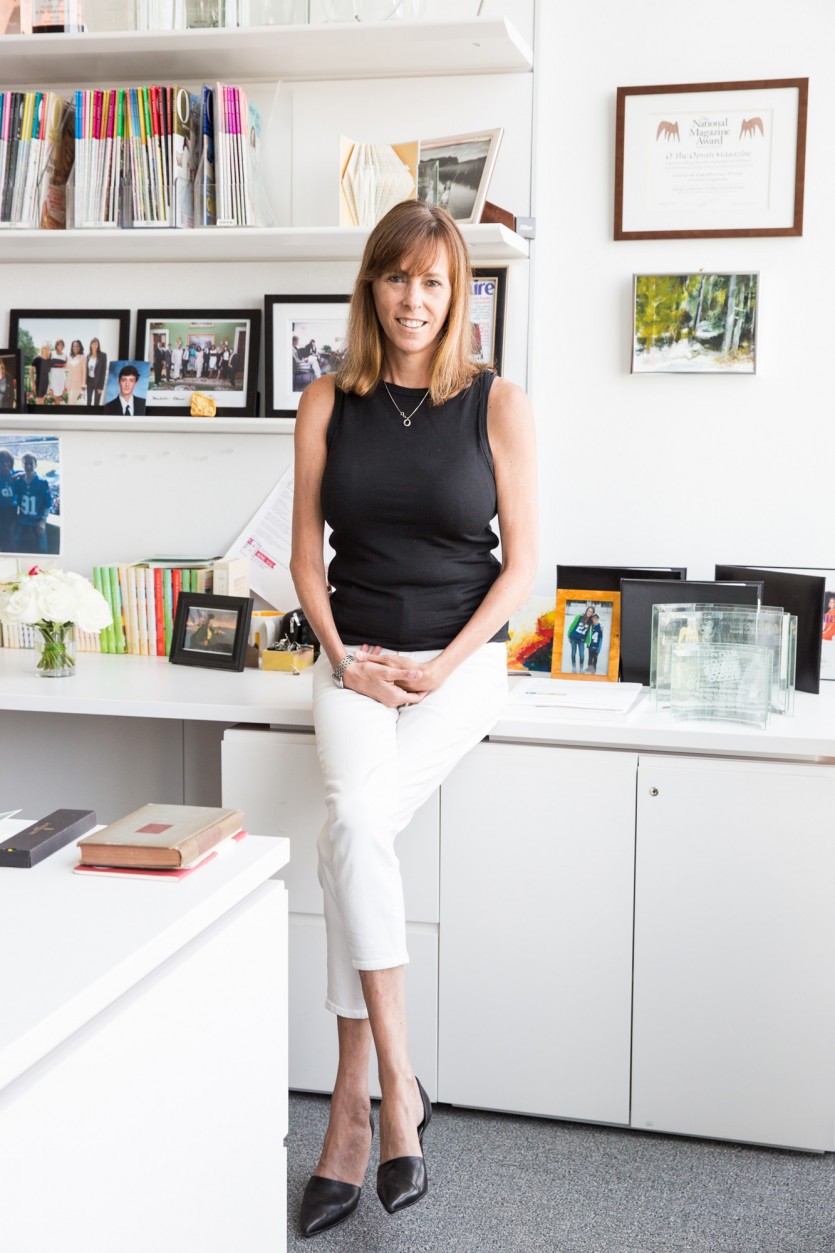 On the challenges she had to overcome:

“Working at national magazines, I had some of the challenges that a lot of us have, certainly in our 20s and trying to make our mark. I was anxious, super anxious, about if I had what it took. I was playing on a very big stage from a very young age. I had to rise to that quickly and sort of publicly, almost. I also had to do a lot of reporting, and I’d never been a reporter before, so I was learning on the job.”

On her typical day:

“It really depends on where we are in the month. For instance, in the early part of the month I could be in quite a lot of meetings. I meet with all the editors—there’s a lot of pitching that goes on, a lot of crafting of feature packages, there’s a lot of discussion about what might work and how we might pull something off. And then of course, as we get to the later stages of the month, there’s a lot of reading and editing to do. I can have a stash of folders on my desk that I have to plow through and do everything that I can to help get these stories to where they need to be. There are a lot of meetings with my publisher. We’re at a time in this business where all editors-in-chief have to work closely with the revenue team because the business is tough these days. It’s really important to figure out what can be leveraged for advertising, but most important of all, what is good for the reader is good for us and ultimately good for Oprah. So it’s kind of threading with a needle that you have to do that requires a lot of very deft thinking.” 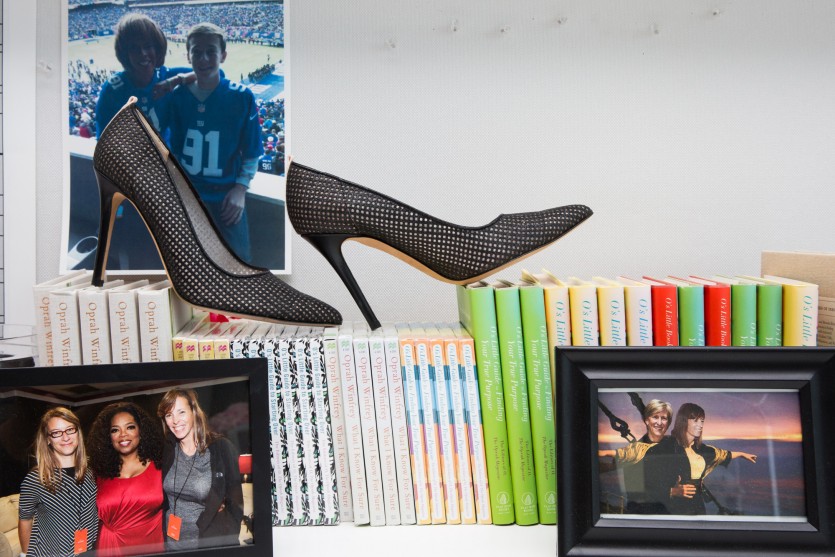 On the changing landscape and if print is ever really dead:

“I really don’t think that’s true at all, and I don’t think it will ever be true. We really are the crucible of the brand, in a sense. We’re where the essence of O the brand lives. You might also think of it as a lab where we really do the very refined and very gutsy and very important work of figuring out what’s next for us, what’s true to us, or what’s the best O we can be. All kinds of iterations of what we’ve done can be expressed elsewhere, and that’s obviously what the website is, and that’s a fantastic delivery system. We get this quicker hit of visual video expression of what we are, and it’s reaching people in a different way than the magazine does. When I think of a magazine, what I really think about is a woman lying in a hammock or being in the bath or on the couch. O has always been said to be a very immersive experience, and women really love to read it cover to cover, it’s really not something you just kind of flip through.

“There are all kinds of ways to be O, but I think those other iterations will be greatly challenged if the heart of the brand didn’t exist, which is the magazine. Especially our brand, considering that Oprah is probably the most famous reader that we know in this country—nobody loves it more than she does, and it is for her a very tactile experience. She loves words on the page, and she loves turning a page; she loves her Kindle, too, and her iPad, but she really loves physical books and magazines too.” 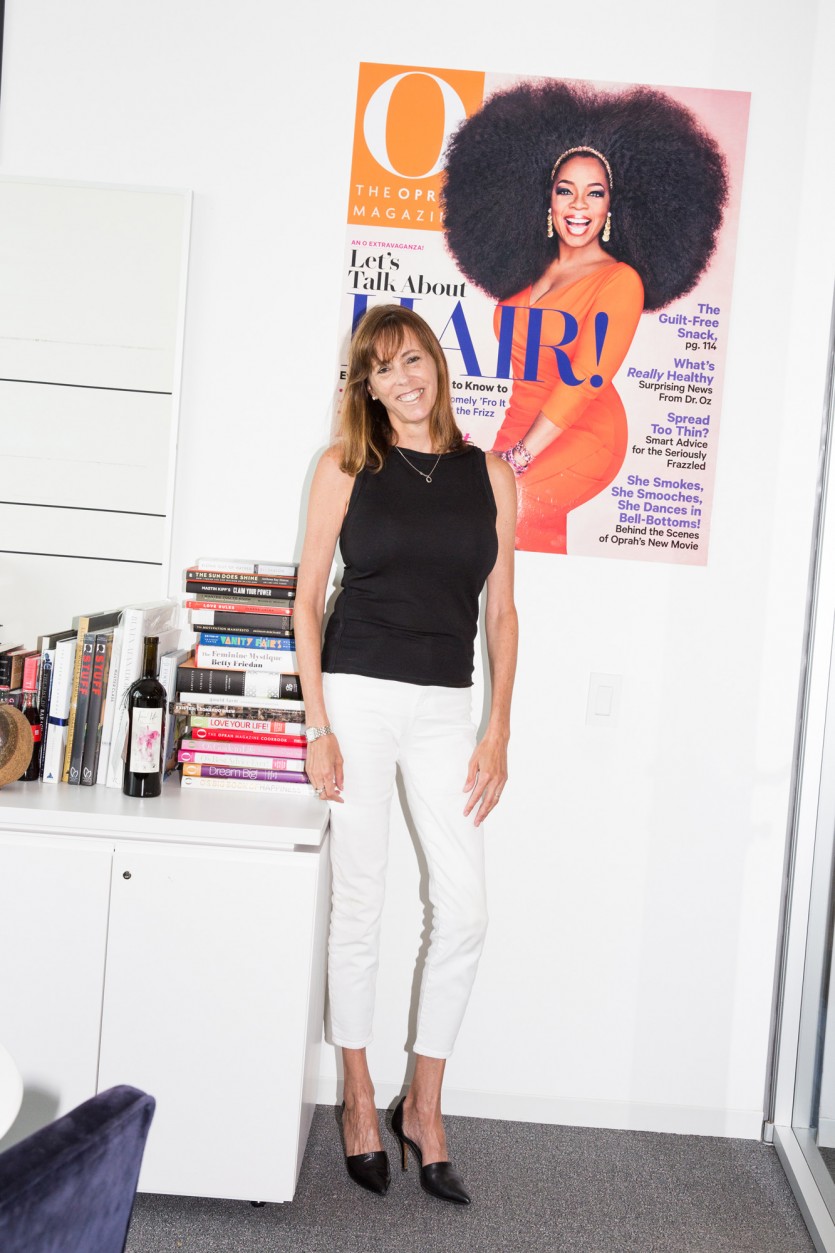 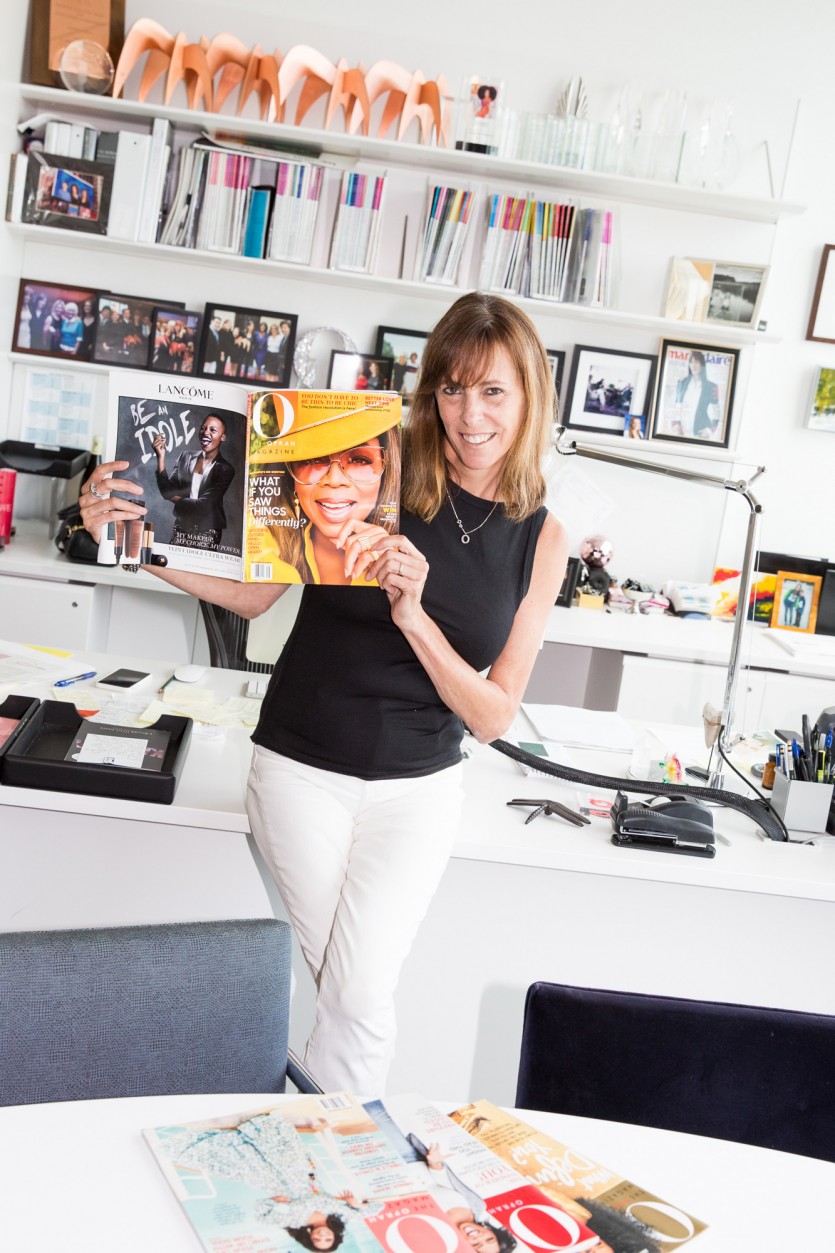 Her tricks for staying organized and focused:

“Certainly one of them is Post-its. I’m horrifically addicted to Post-its—those little yellow ones. I have them all over my desk, I’m looking at them right now—it’s sort of a choppy sea of yellow Post-its. The funny thing is I never, ever, ever throw out a Post-it without reading what’s on it. So my system works. They all sit on my desk. My mind isn’t on what’s written on them, but then the time will come again where I’ll try and clean up a little, and I will figure out what I need, what are the action items, what do I need to do, and it’s a system that actually works for me. I really stick by it even though people think I’m a little crazy for how obsessed I am with Post-its.

“The other thing I would say is getting back to people quickly. I have a big, busy job, and I get comments frequently when I return someone’s emails—they will frequently say, ‘Thank you for the prompt response!’ People sound a little shocked, like I’m supposed to do that thing that bosses do where they wait weeks or what have you. I can’t operate that way. If I had all this stuff weighing down on me, I would find that incredibly stressful and hugely inefficient. So something I do is try to craft a response as fast as I can, and then I can move on.” 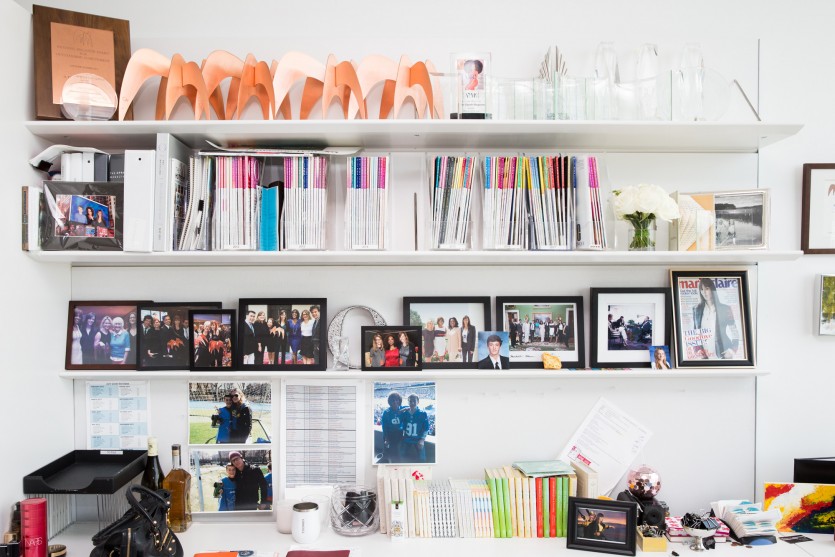 Her favorite way to unwind:

“Certainly a glass of wine with a great girlfriend—that’s one of life’s great joys. Some of them are colleagues or colleagues in the industry, certainly mom friends—that’s an enormous stress-reliever and joy to talk about the kiddies—the good, the bad, and the otherwise. I really like to watch football with my husband on a Sunday and Monday night. We also love to play games, so we’ll play Scrabble or Rummikub or something. It really takes the knot out of your shoulders.”

“Like everybody else in the world, I look at my phone. I bring my laptop up into bed with me, and I’m not proud of either of those things.”

“I just read Michelle Obama’s new memoir, which is incredibly fabulous. I loved every page. I recently read Bill Cunningham’s memoir, which is also fabulous. That is a complete delight. I’m getting ready to read Gary Shteyngart’s new novel.” 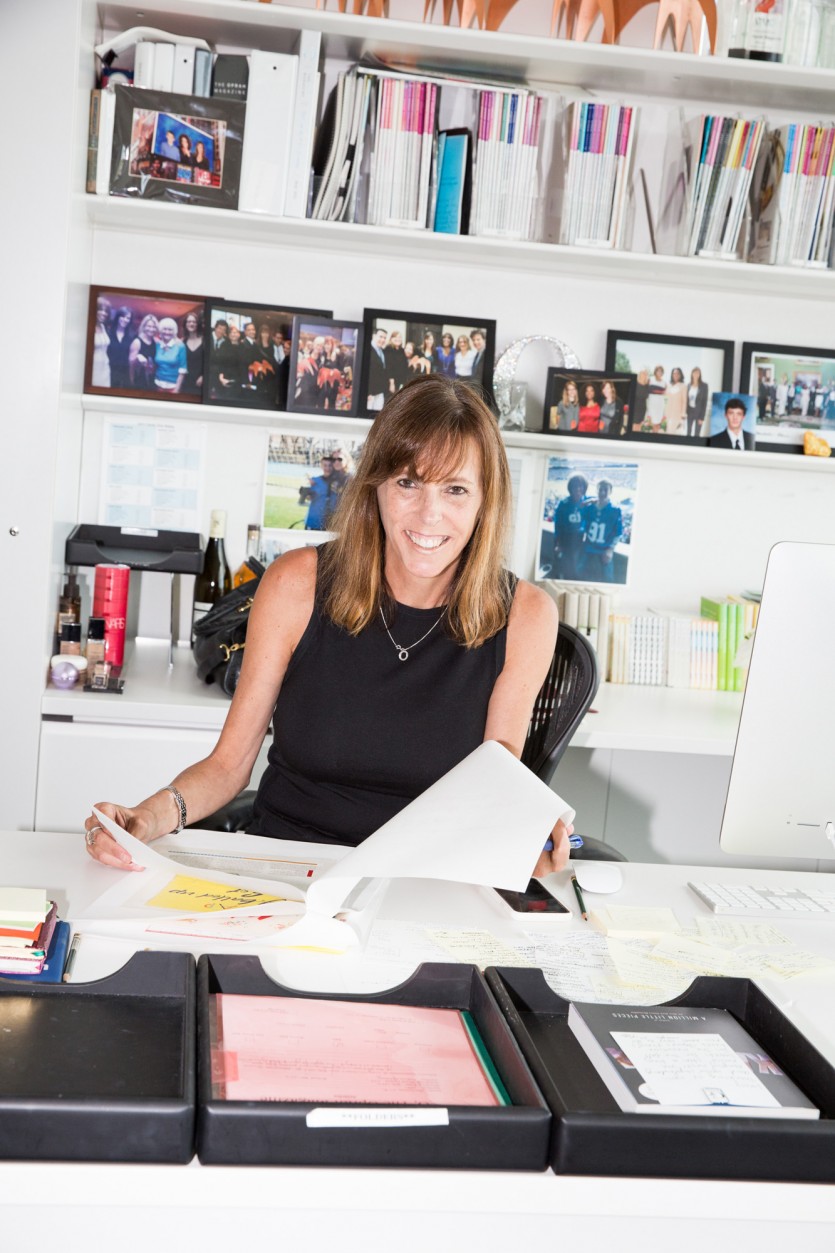 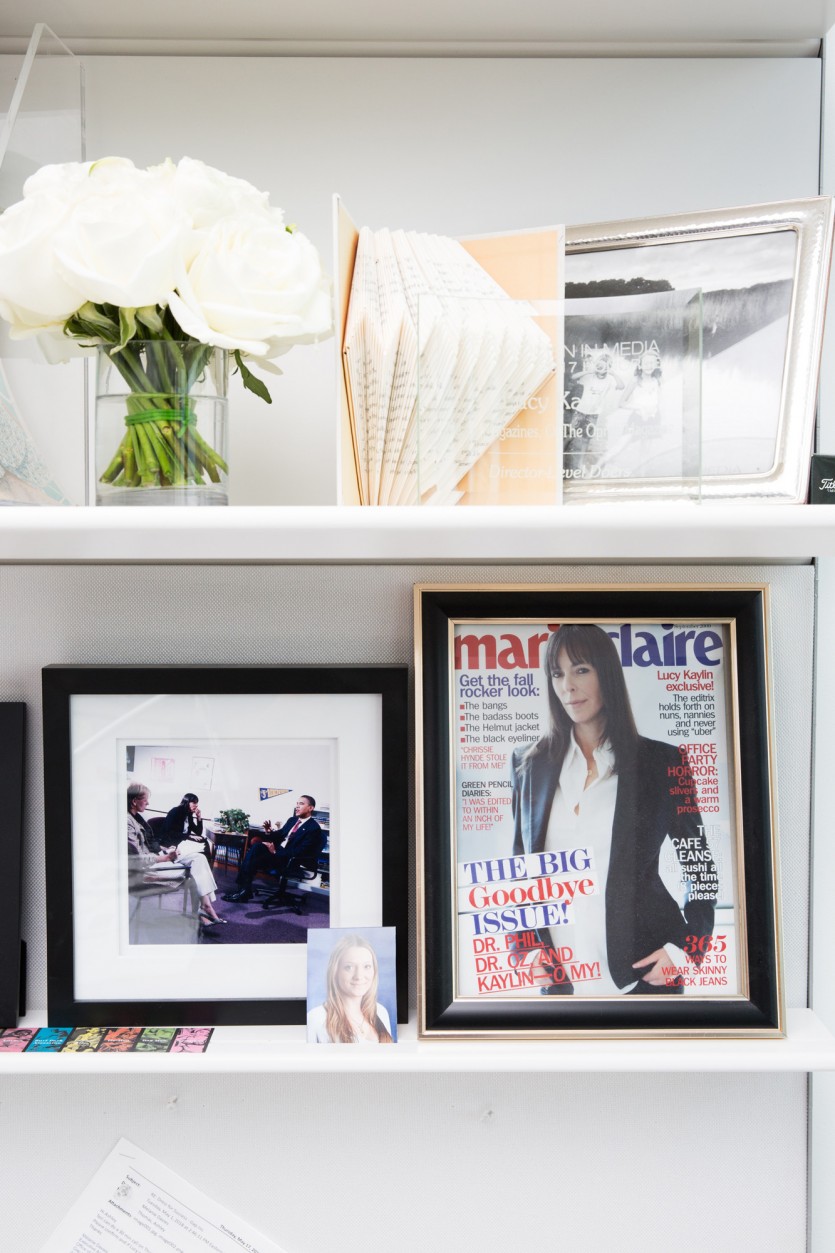 “It actually came from a couple of people who said, ‘Don’t take it personally.’ So what that [referred to], of course, was [when] something goes wrong or if the boss doesn’t like your story, or you don’t get the assignment, or you need to take a chunk out of your piece that you thought was really awesome and it offends you that you have to lose 800 words or something. When I was younger it was harder for me to accept that than it would be now. It doesn’t have anything to do with you, really. These are very tricky products that we’re making, and stuff changes all of the time. Sometimes someone’s better than you for that assignment, or we decided to recast it and we really wanted to have a different angle on the story, or it’s going to get moved to November, or we’re going to kill it. It’s really important to not take all that stuff personally.”

A piece of advice she would give to aspiring journalists/editors:

“Be curious, and write well. If you can boil down most of what we do to the essential pieces, those would be way up there. Be curious, don’t be complacent, don’t think you know more than you do, don’t just Google stuff, don’t take the easy way out when you have space to fill in whatever your assignment is—be curious, and get fresh information, and dig.”

Who Ever Said You Can’t Be Productive While Working from Home?
This Woman Is Responsible for Helping to Launch Dozens of Fashion Brands
In a Crowded Editorial Space, This PR Firm Helps Their Brands Stand Out Amid the Noise