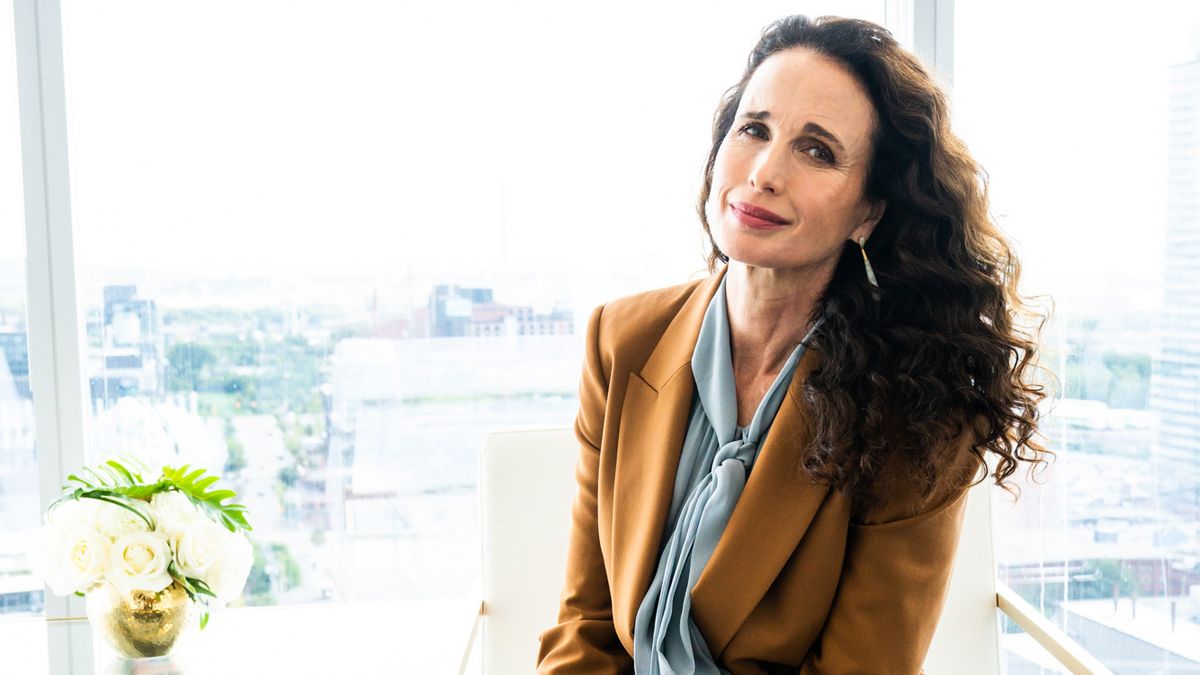 The model and actress has a lot to say, and we are listening.

Noah Lehava
Renée Rodenkirchen
When I walk into the 17th-floor suite of an east end Toronto high-rise, Andie MacDowell is standing in a muted caramel Hugo Boss pantsuit, backlit by the near-bird’s-eye view of the Toronto skyline, taking a bite out of one of the crudités laid out on the table. She dabs her berry-hued lips with a corner of a napkin and leans in to shake my hand. We’ve only just met, but she’s just as interested to hear about my day as she is about speaking on women in film and gender inequality in Hollywood. She’s genuine, and she’ll tell you how it is. You see, MacDowell is no novice—she’s been acting for over three decades, and has been the face of L’Oréal Paris since she was in her 20s. So to say she’s seen it all would be an understatement.
It was a while ago, but do you remember the moment you found out you were going to be the face of L’Oreal?

“I had to tell them I was pregnant. I had just found out that I was pregnant, and I was 27, and I was worried. I felt maybe that would be that, you know, but they were OK with it, so I have a lot of respect for that and ended up having a couple more with them. I worked when I was eight months pregnant and right after having a baby.”

That’s quite phenomenal. How has the journey been?

“It’s been really beautiful. I’ve watched them grow, which is interesting because when I first started, there were just two of us. Now they’re this huge international, totally different experience that I have with them—they’ve taken me with them on this journey. And becoming participants at film festivals like the Cannes Film Festival, here [at TIFF], and also connecting with other countries. You meet people from Bollywood and China, all over, and you come together at different film festivals, and that has been amazing. I think there’s something to the longevity to it that is really beautiful.”
There’s been so much conversation on women in film and diversity of voice during TIFF—it’s been remarkable. Why do you think that is?

“I think that power is intoxicating, and when you can justify it, you do. I also think that, psychologically, women have had to behave in certain ways in order to survive. Change is hard, and a lot of times people don’t want to give up their power and they don’t understand what it feels like to be powerless because they’ve never been in that position. But I do think there are a lot of men out there that see that change is not only necessary, but a desirable aspect for all of us; they believe that it will bring positive energy into the world by having more female voices, and thank goodness for them. It’s hard to make the shift without them—we’re going to need their participation to help in that.”

Have you faced any challenges yourself?

“I’ve faced all kinds of challenges. I’ve been direct, and I’ve also tried to placate, you know, I have, I know how to do that. But it’s not my preferred way of going about things, but when you’re powerless, you do what to have to do. For instance, I lived in Montana, so it was hard for me to understand the way that Hollywood felt. But I heard people say that it was common knowledge in the business that people went to the movies to see the men, not the women, so they would cast the male leads first. This is normal. I see you’re surprised, but I’m telling you the honest truth. People my age, they’re going to tell you the same thing; this was common knowledge, this is the way they felt, this is the way they talked, and they had no shame of saying it.”
I didn’t know that…

“I went in for a meeting, and I read the script, and I actually thought it was a really cute script. I thought I was a little bit old for it—I was in my late 30s at the time. When I read it, I was like, Renée Zellweger would be perfect for this. But I go to the meeting anyway, because it was someone that made the kind of movies that I really enjoy—romantic comedies, these were really highly comic in general, and I just felt, ‘This would be a fun meeting.’ So I go and sit down in this meeting, and he starts telling me that he’s going to cast the male lead first, which is a much smaller role—the whole movie was about the woman, and I couldn’t believe it! He said it: ‘People go to the movies to see the man, not women.’ He said it! And I just couldn’t believe it. I just said, ‘I think you’re wrong, I think you’re wrong. I think people go to movies if they’re good, and this is a good script.’ And I said, ‘Honestly, I think I’m too old, I don’t think that I’m the right person. I think Renée [Zellweger] would be perfect and you would have a great movie.’ Believe me, I didn’t get hired. I never saw the man again, either. That was that. It’s just the kind of oppression you would not believe it. It’s just been hideous.”
Have you experienced ageism too?

“Yes, people would say to me, ‘How does it feel to turn 40 and know you’re not going to work anymore?’ and the fact of the matter is that it gets really tough. OK, this is a sweet one, this is juicy: I had people say, ‘Don’t worry, honey, you’re going to work because Jack [Nicholson] and Warren [Beatty] are going to need people like you.’ Well, these people are 20 years older than me. I’m thinking to myself, ‘Well, at least I’ll work,’ and that is where we are as women, that is where we are! I did end up doing a movie with Warren shortly after someone said that to me, and you know what, I’m pleased, I’m thankful. Give me a job, yes, I’m thankful, but it has to be with someone 20 years older than me in their minds because that’s what happens to women. When women turn 40, from a man’s perspective in Hollywood, they are no longer sexual creatures. It’s gone. That’s what they think. But men, they’ve become much more handsome, and this connotation has been sold to us so deeply that I hear intelligent women say the same thing.

“I’m reading this book that someone sent to me for possibly turning it into something, and it was a famous male author. Right in there, he’s got it that the woman I would play would say, ‘Because men, they age better than women, why is that?’ and I thought to myself, ‘I am not saying that.’ If this ever happens, I’m not saying that, because I don’t feel it’s true. I feel it’s a concept that has been important to men. I believe what happens to men psychologically is that all of a sudden they truly fear to get older and they fear it much more than women. I think women are much more comfortable with aging than men are. I think men need to see themselves with a younger woman because they can pretend that they’re not aging. And they’ve done it so well that they’ve convinced us that they don’t age. But they do! [Laughs] They age just as much. They age—their bodies change, you know, they get hanging here, they get hanging there...they age! They get all wrinkly, but somehow they have convinced us that that’s handsome. But yet, the same thing happens to a woman and it’s not. So I don’t know.”

What advice do you give your daughters who are now in the industry?

“You know what, the kind of advice I gave my daughters was that I regretted being worried. I was raised in the South, I was always worried about what people thought, I was too concerned about pleasing other people instead of pleasing myself. So I really encouraged them to be brave and to do whatever they wanted to do. Yeah, we have these kinds of conversations a lot about how people perceive women and how people perceive men.”